A nova has erupted right next to the Eta Carina nebula, which may remain easy to see in binoculars during April. A nova used to mean a “new star” but now it refers to stars that periodically flare in brightness, without destroying themselves. Most of the time the novae that occur are too faint for the casual observer to notice but every couple of years there is one bright enough for everyone to see. At the time of writing (late March) this nova was around magnitude 6, so borderline naked-eye visibility. Have a look here at the Astronomy Picture of the Day for March 25 for more information or do a search for “nova carina 2018” for the latest news.

Update on the Humanity Star: The Humanity Star, the reflective geodesic sphere that was featured in The Sky Tonight last month, de-orbited and burnt up on re-entry on March 23rd. This was many months earlier than expected, but apparently the low mass and large surface area of the sphere led to more atmospheric drag than anticipated and it came down early.

If you look to the north of west in the evening twilight you should be able to see brilliant Venus, returning to our evening skies until October this year. It will get a little higher and easier to see as the month goes on, and the thin crescent of a new Moon will be above it on the evening of the 18th.

On the other side of the sky three planets are also shining bright. The first to rise is Jupiter, currently in Libra. At the beginning of April it is rising at 8pm, so you won’t have long to wait for it. By the end of April, it will already be above the horizon by the time it is dark.

Jupiter will be easy to locate – it will be the brightest star-like object in the east, and it will be by itself. The Moon will also pass by it not once but twice during the month – the first time on the 3rd of April, and then the Full Moon will be next to it again on the 30th of April.

Mars and Saturn, though, start April next to each other, which may cause some doubt if you are not used to observing them. You could go with colour – Mars has a distinct orange-red colour from its reddish soils, whereas Saturn is more a yellowish colour, from the touch of helium in its clouds. Mars is going to pass Saturn to the right, as we see it looking east, or to the south side of Saturn, if you like to be more technical. The Moon will join them both on April 7th, where Saturn will be above the Moon as it rises (on the dark side) and Mars will be below it (on the bright side). After this meet-up near the lid of the Teapot of Sagittarius, Mars is going move off quickly down towards Capricorn. 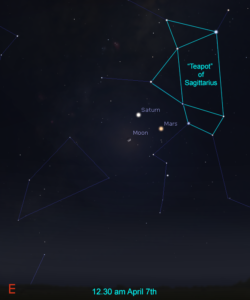 The view to the east in the early morning of the 7th of April, as the Moon makes a nice trio with Saturn and Mars near the Teapot asterism of Sagittarius.

Lastly, we must not forget Mercury, making its best morning apparition for the year in the southern hemisphere. That means if you’re an early riser and you’ve always wanted to see the innermost planet, this will be the best opportunity for 2018. It will be too close to the Sun during the first week of April, though, but after the 11th it will be rising before the morning twilight starts, and will remain that way until the middle of May.

Hydra has the distinction of being the largest and longest constellation in the sky. It stretches over 100 degrees, with the head near Cancer the Crab and the end of the tail down near Libra and Centaurus. The easiest part to recognise is the loop of stars that makes the head – tracing the full length of the tail may require a dark sky and lots of patience.

There are two commonly told stories from Greek mythology as to why Hydra was placed in the sky. The first involves two neighbouring constellations, Corvus the Crow and Crater the Cup. Corvus was given the Cup by the gods to go and fill with cool water, but the crow was distracted by some ripe figs. By the time he had eaten the figs and realised how long he had been gone, he snatched up a snake (Hydra) and took it back to the gods as an excuse for his tardiness. The second story is that the snake represents the nine-headed monster that Hercules had to slay as one his Twelve Tasks. Each time he cut off a head another one grew in its place, but he eventually won the fight.

The brightest star in Hydra is called Alphard, the ‘Solitary One’, and it is an apt name as it does seem rather lonely in an otherwise unremarkable patch of sky. 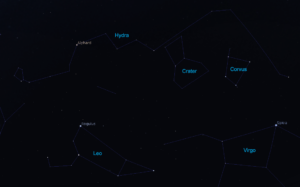 Jupiter is famous for being the biggest planet in our solar system and for having the giant storm known as the Great Red Spot. It seems like it’s been there forever, at least as long as we’ve had good telescopes able to resolve it. But now it seems like it might be shrinking and could cease to be the dominant feature of Jupiter’s atmosphere in the decades to come. This might be disappointing if you’re happy Jupiter is back in the evening sky for 2018 and you’re looking forward to seeing this famous feature of the solar system for yourself! It’s not going to disappear this year, however, but its end could be as soon as ten to twenty years away, some astronomers believe. 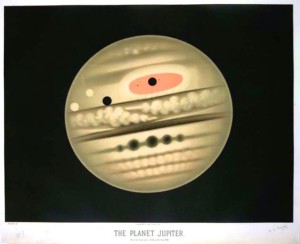 A drawing of Jupiter made in 1880. It shows not only the size of the Great Red spot, four-times larger than the Earth, but a double moon transit (the two pale dots on the far left of the disc) and their shadows (the two black dots, one of them in the middle of the Great Red Spot.)

We know during the 1800’s that the Great Red Spot was at least four time wider than the Earth – that’s about 56,000 km long. By the time Voyager 2 flew past in 1979, about 100 years after the drawing that was made above, it had shrunk to half that size, but it was still impressive. The latest measurement in 2017 has the Great Red Spot at only 1.3 times the size of the Earth, or 16,350 km across. Rather than a flattened oval, it’s now looking more circular, and that’s bad news, too, apparently. Once it becomes circular it could weaken rapidly. But there is still so much we don’t know about it, so all we can do is keep watching while we wait to see what does happen. 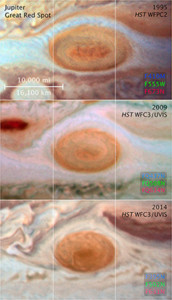 Three images over two decades from the Hubble Space Telescope demonstrate how fast the Great Red Spot is shrinking.

Observing the Great Red Spot yourself is still possible, but takes patience and good timing. Because Jupiter rotates so fast – once in ten hours – you only really have a two hour window to see the Great Red Spot cross the face of the planet. It’s also not a dark red at the moment, more an orange colour, which makes it harder to see as it doesn’t contrast well with the other clouds and cloud bands. To help you know when to look, if the Great Red Spot might be visible, you can get tables of expected times of transit across the meridian (the centre-line of the face of the planet) or you can use online calculators like the one here. 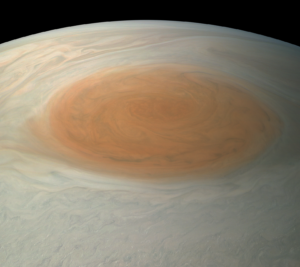 The Great Red Spot in true colour, taken by the Juno spacecraft in July 2017