Are you wondering why Easter is so late this year, almost bumping into ANZAC Day and making a strange, chopped-up week of public holidays? Easter is deemed to be the first Sunday after the first Full Moon after the equinox, and while astronomically Easter should have been March 24th, a traditional method of counting the days means that this year it will be on April 21st for most of us.

The 12th of April is Yuri’s Night, when the world remembers the first man to reach space on this day in 1961, Yuri Gagarin. It’s a good night to have a space-themed party. Go to Yurisnight.net for ideas!

The evening of the 25th of April will see the first of three lunar occultations of Saturn visible from Australia for 2019. This is when the Moon will “hide” Saturn for a while, but this one won’t be visible from WA, only from SE Australia and Tasmania, as can be seen in the map below. But it will mean that Saturn will be very close to the Moon, appearing to be just above it, when it rises for Perth around 10.30pm. If you are reading this from the eastern states, you probably won’t get to see Saturn disappear either, just the reappearance on the dark limb of the Moon. 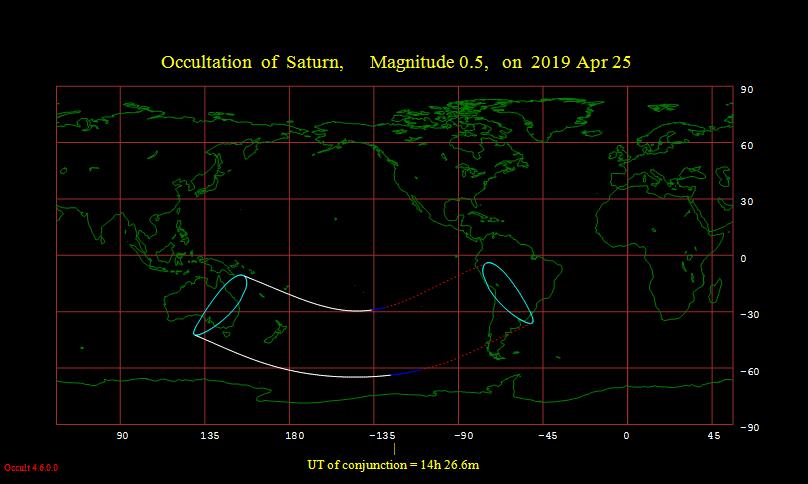 UT is Universal Time, the modern equivalent of the old Greenwich Mean Time. To work out your local time just add the hours you are ahead of UT. Perth is +8 hours, so 14+8 = 22hrs, or 10pm local time.

Mars continues its slow fade into the evening sky during April. If you are trying to find it, look towards the northwest under the Hyades, the V-shaped cluster of stars that make up the head of Taurus the Bull. The Moon will be above it on the 9th.

The good news is that Jupiter is finally back in our evening skies! It starts the month rising at 10pm and by the end of the month it is rising about two hours after sunset (8pm), which means we don’t have to stay up so late anymore! Saturn is also creeping back into the evening sky, rising at midnight at the start of the month and moving forward to 10pm by the end of the month. Check out how close it is the Moon on the evening of Anzac Day! Some lucky observers in SE Australia will have seen the Moon hiding it as it rose, an even astronomers call an occultation (See “The Casual Observer” above for more information.)

For those who have to rise early, Venus and Mercury grace the dawn sky for the whole month of April. Venus, the brighter of the pair, will be above Mercury during this time, and a waning crescent Moon will slip between them on the morning of the 3rd of April. Make the most of Mercury here, if you can – it will be out of sight behind the glare of the Sun during May.

Leo, one of the constellations of the zodiac, can be found lying on his back in the northern sky during the autumn evenings. He has an easily recognisable shape; the mane of the lion is marked by a distinctive curve of stars known as the Sickle, which in these modern times is more often described as a back-to-front question mark.  In Greek mythology Leo represented the Nemean Lion, which came down to Earth from the Moon and rampaged across the countryside until Hercules killed and skinned it as one of his Twelve Tasks. Zeus then returned the lion to the stars.

The brightest star in Leo is known as Regulus, which means “the little king” but on many older charts it was known as Cor Leonis, “the heart of the lion. It lies right next to the Ecliptic (the path the sun and planets take through the sky) so on occasion it is occulted by the Moon. The next series of occultations will run from December 2016 to April 2018.

Algieba, gamma Leonis, marks the head of Leo and it is near this star the famous Leonid meteor shower radiates from. Every 33 years or so over the last couple of centuries great ‘storms’ of meteors have been witnessed falling from this region. The great storm of 1833 was witnessed by many people and changed the way people thought about meteors. Before this event it was thought meteors were entirely an atmospheric phenomenon, such as gas released from plants catching fire, but the spectacular display changed that and a new branch of astronomy was created. High rates of meteors were also seen in 1998, 1999, 2001 and 2002, although they were nothing like the famous storm that was seen in 1833 or even the storm of 1966. 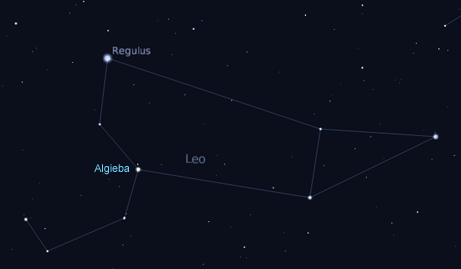 Leo the Lion can be found lying on his back to the north during April and May.  Look for the distinctive curve of stars known as “the Sickle”, which mark his head and mane.

Autumn is a great time to observe galaxies and there are some nice ones in Leo for small telescopes and even binoculars if you are in a dark location. But do wait for a moonless night to try and find them – the Moon and other light pollution, such as streetlights can make the background sky too bright to find these small faint, faint and fuzzy objects.

Leo lies on his back for us here in the southern hemisphere so south is up in the chart below. Find the star Chertan (theta Leonis), on Leo’s hip, to start your star-hop. Move up to next bright star, than across to the right a bit, and you have a pair of galaxies, Messier 65 and Messier 66, in view. They are tilted towards us, both on the same angle. But below them, to the north, is a third galaxy, NGC 3628, which is edge on and just a little fainter than M65 and M66. But with a low power eyepiece you should be able to fit all three galaxies into the same field of view!

What is also unusual about these three is that they are the same distance away from us, about 20 million light years, and are probably affecting each other gravitationally. 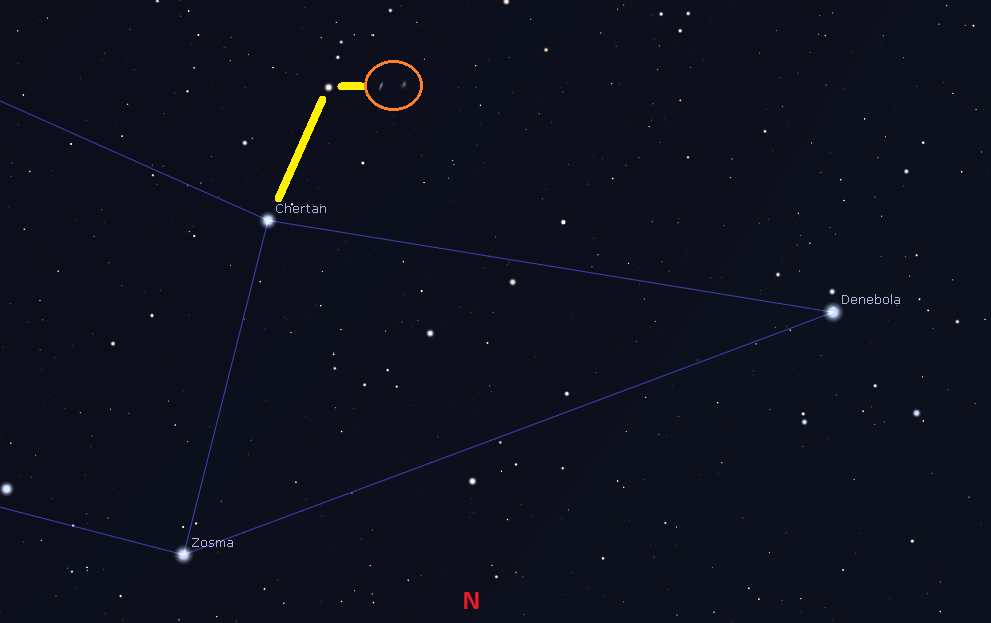 A short star-hop up from Chertan, on the hip of Leo, leads to two bright galaxies, M65 and M66.

There are usually more than one International Years celebrated each year, and 2019 is the Year of Indigenous Languages as well as the Year of the Periodic Table, and both them relate to astronomy! Each indigenous culture around the world has their own name for the Sun and the Moon and stars, some of which you might be surprised how familiar you are with them.

The open cluster of stars known as the Pleiades, or the Seven Sisters, is a good example. It is a distinct group of stars that many cultures have a similar story about – that they were originally seven sisters, but one of them had bad luck befall them, and their light dimmed from the sky, which is why we only see six bright stars in the cluster. Many Australian indigenous cultures share a version of this story, and the Maori of New Zealand, who call it “Matariki”. They look for the first rising of the star cluster before the Sun, known as the heliacal rising, which marks the start of their calendar year in June. The Japanese have several names for it, but one of them is used for a car company name – “Subaru”. Have a closer look at the logo on a Subaru car next time you see one!

Some of the stars we can see in the sky have been given official names, so that we can have one name to recognise them by around the world, and you can explore the list of names here. The brightest ones use the old names from European and Arabic tradition, but some of the newer names comes from other cultures all around the world. 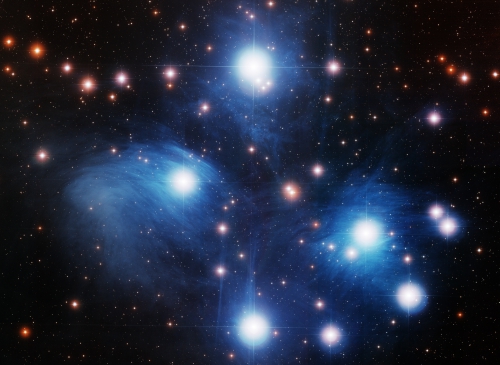 The Pleiades, also known as the Seven Sisters, have many names around the world.