This August there are five moon phases, with two New Moons occurring within the calendar month. There is a New Moon on 1st August and the second on 30th August.

Get your creative mojo going; you have a chance to name a star and its orbiting exoplanet! Every country in the world has been designated a star and planet by the International Astronomical Union (IAU) as part of their 100th anniversary celebrations and Australia’s star is a 7th magnitude yellow-white dwarf in Mensa the Table Mountain, 125 light years away. There are rules as to how to choose the names, so head over the website at name-exoplanet.net.au to find out more.

The Perseid meteor shower is active this month and you may hear about it in your social media feeds, but for most of us in southern Australia it’s just not visible. The further north you are (e.g., the Pilbara, Kimberley, Top End of the NT and Far North Queensland) the better the chance you have of seeing some, but even then it will be much less than what the northern hemisphere will see. However, you should still keep an eye on the sky at any time, you never know when a big, bright sporadic meteor might streak through above you!

August 2019 is one of those quiet months, where not much is happening. Mars is already low in the evening twilight, but the really keen observer might get a last glimpse of it below the thin crescent Moon on 2nd August in bright twilight. Otherwise its good-bye to Mars until it reappears in the morning sky in October.

As the sky darkens bright Jupiter is overhead, not far from Scorpius and its brightest star, Antares. Saturn is further east, down below the Teapot asterism of Sagittarius. On the evening of 12th August the Moon will be very close to it. For parts of NSW and Queensland the Moon will actually go in front of it, an event known as an occultation, but this won’t be visible in WA. The map below shows that the northwest of WA would see this event, if only the Sun wasn’t still up! So by the time it gets dark, the Moon will have moved off to the east and appear below Saturn for observers in WA. 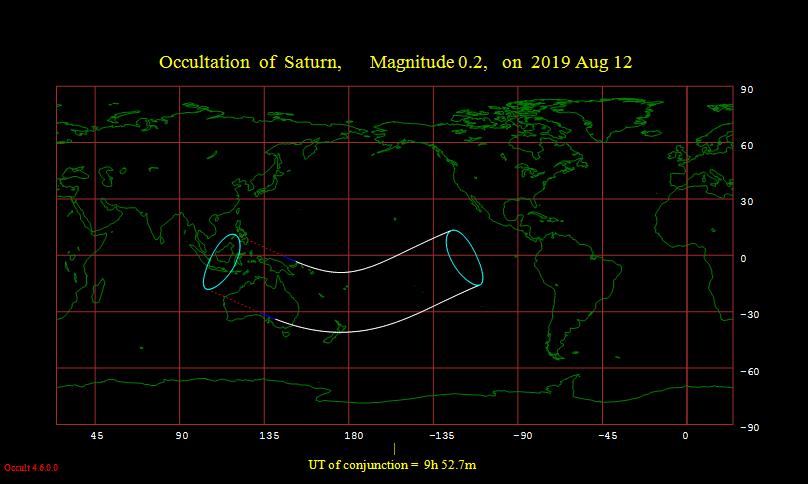 Early risers will get a good view of Mercury during the first two weeks of August. Around the 10th of August Mercury will be at what is known as “greatest elongation,” so it will be high in the morning twilight during this time. But by the end of August it will be out of sight again, joining Venus and Mars next to the Sun.

Sagittarius is the second of two centaurs in the sky. While the other, Centaurus, is considered to be the wise centaur Chiron, Sagittarius has no name. He is usually pictured holding a drawn bow, ready to fire an arrow into the heart of Scorpius. Some people think he represents the time during the northern hemisphere autumn when much hunting was done to prepare for winter, and should actually be seen as a man on a horse, rather than a centaur.

While it is large constellation one part stands out very well no matter where you are and this is known as the Teapot.  The spout of the Teapot points the way to the centre of the galaxy lies in the sky, which is why the star clouds of the Milky Way seem thick and bright in this region. From the top of the handle to the Teapot a long curve of less bright stars that marks his back and hind legs can be traced around and under the base of the Teapot. 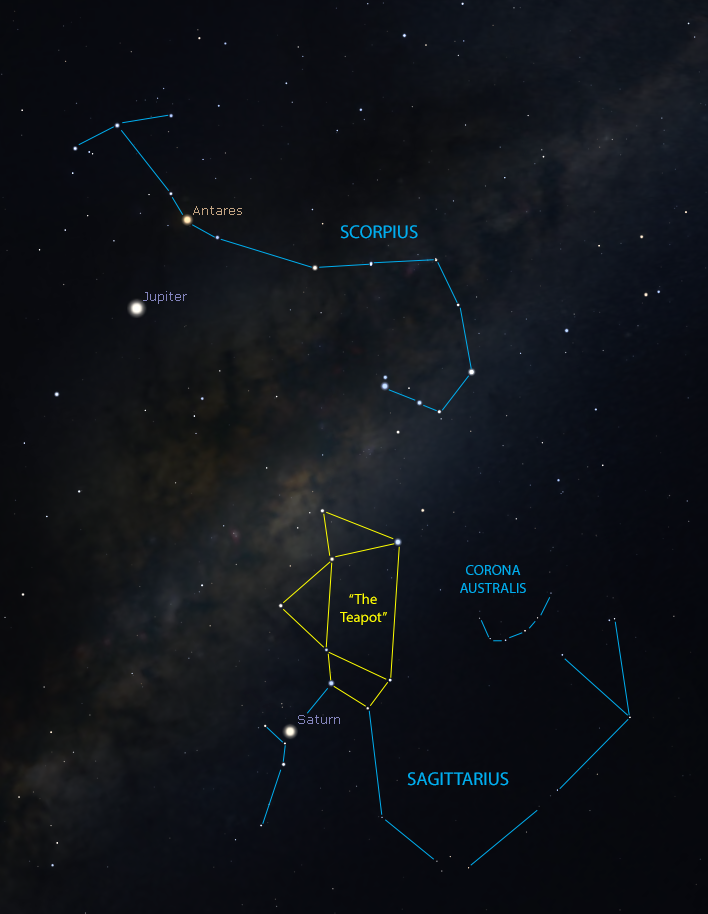 In 2019 Saturn is below the Teapot asterism that marks the brighter part of Sagittarius. Jupiter, the brighter planet, is up near Scorpius.

Sagittarius has lots of great targets to choose from, as it looks towards the centre of the Milky Way, so it can be hard to make a decision which one to focus on sometimes. The Trifid Nebula, also known as Messier 20, makes for a stunning photo opportunity as well as an interesting study in the telescope.

It was named so because of the dark dust lanes that divide the red section of the nebula into three parts (as seen in the image below), not because of any reference to the novel by John Wyndham, The Day of the Triffids. It is a nebula much like the Great Orion Nebula, an emission nebula, where a new cluster of stars is being formed, which you can see as the bright knot of light in the centre. The light from these stars is exciting the hydrogen around them, causing it to glow in the characteristic pink colour. The outer blue-coloured nebula is caused by light reflected off nearby dust and gas outside of the bubble that the hot young stars in the new cluster have formed. 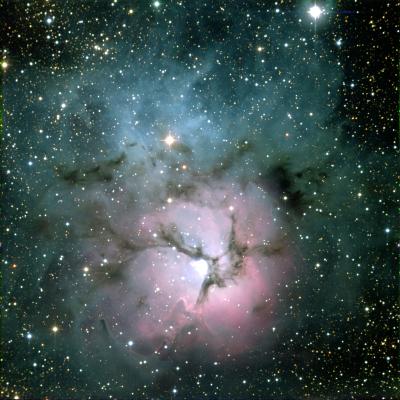 The Trifid Nebula is just to the north of the Lagoon Nebula, M8. They are both in Sagittarius, above the spout of the Teapot asterism. Aim for the Lagoon Nebula first, which is quite large and has a spiral-shaped open cluster in it, then move a little further north to the Trifid Nebula. You will need a dark, moonless night to see it as well. 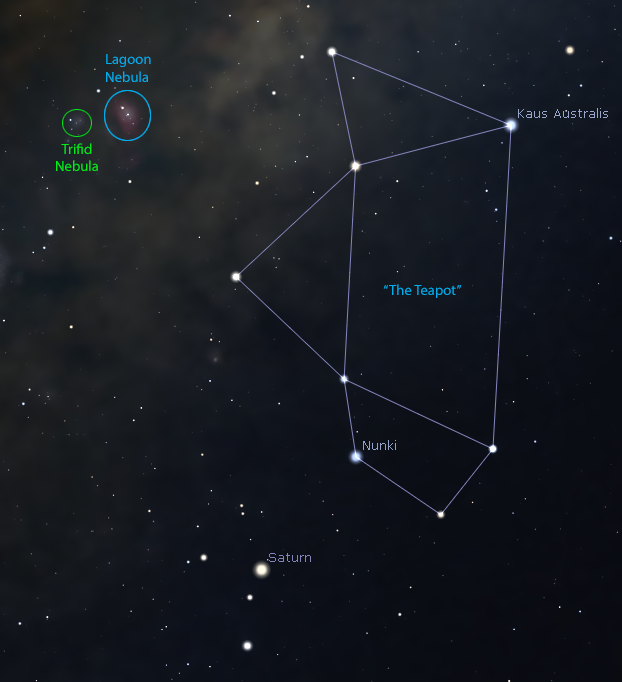 The Trifid Nebula is just to the north of the Lagoon Nebula. They are both in Sagittarius, above the spout of the Teapot asterism. In 2019 Saturn is just below the Teapot.

On Aug 25th 1989, Voyager 2 completed its Grand Tour of the outer solar system with a flyby of Neptune. It had visited Jupiter, Saturn and Uranus on its way out before reaching the furthest planet yet visited, revealing sights never before seen. 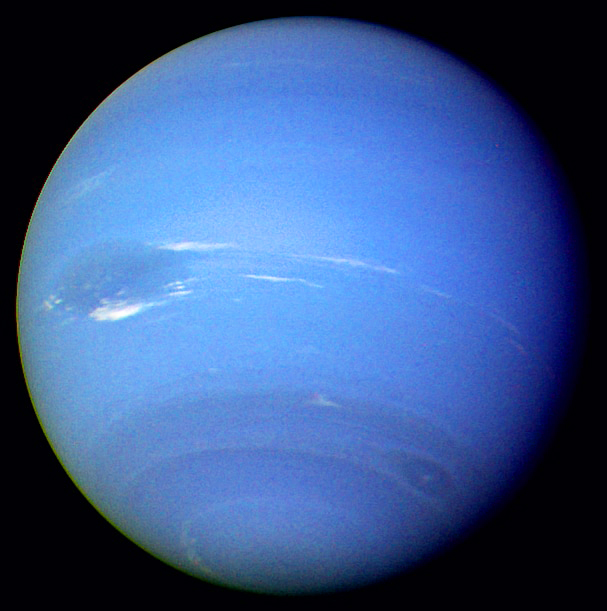 Neptune and the Great Dark Spot, as seen by Voyager 2 in 1989. The spot has since disappeared. Credit: NASA/JPL

Amongst the discoveries made were the thin rings circling the planet, six new moons and the two-faced nature of Triton, its largest moon. The side facing the planet had geysers of nitrogen spurting up from the surface, creating a thin atmosphere around this strangely textured moon. Back then no one expected activity like that but now we know it’s not that unusual. 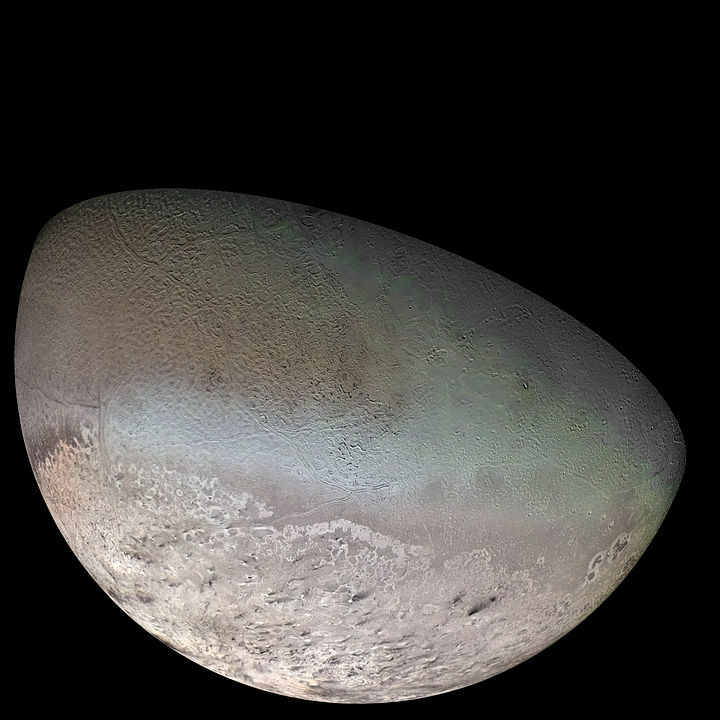 The flyby also enabled the mass of Neptune to accurately determined, as well as its distance from the Sun, and it was found to be 0.5% less dense than previously calculated. This means that all orbital anomalies are accounted for and there is no unknown “Planet X” out beyond it pulling and pushing on it. Of course, we now know of the Kuiper Belt and the many large objects it contains, but none of them have the mass needed to push and pull Neptune about. So if you read anything that mentions “anomalies in Neptune’s orbit” it was either written before 1989, or the writer hasn’t done their research properly!

To reach Triton, Voyager 2 had to fly over the north pole of Neptune and down, out of the solar system. If we are to look at where it is headed now in the sky, it is located in the direction of the constellation of Telescopium, just to the south of Sagittarius. The deep space tracking station at Tidbinbilla, just south of Canberra, is still in regular contact with it.

Will we send another space craft back to explore Neptune further? There aren’t any plans to at the current time but as technology changes who knows what might happen.