The summer solstice for the southern hemisphere occurs on December 22nd this year. The sun is the furthest south in the sky for the year and after this the days begins to get shorter for us again. Sunsets will keep getting later, however, until early January when the Earth reaches perihelion, the closest it gets to the sun in its orbit.

Mid-December is also time for one of the best meteor showers of the year for the southern hemisphere, the Geminids. The peak time for the shower are the nights of the 13th and 14th of the month, so you may notice more meteors than usual around this time. It is also a First Quarter moon this year, so the Moon will have set by the time the meteors really start to get going after midnight.

As December starts you only have one week left to observe Saturn in this year before it goes behind the Sun. A thin crescent Moon will join it on the evening of the 9th of December, and after that it will become difficult to see it sinks lower to the horizon and into the Sun’s glare.

Mars is high in the north as it gets dark, but it is nowhere near its best now either, as it, too, falls away behind the far side of the Sun. Larger telescopes might still be able to make out some patchy features and the white polar ice caps but it is getting more difficult as well. It sets around midnight.

Venus is now well up before dawn in the morning sky, where is it going to stay for the rest of summer. You can catch it with the Moon on the 4th of December and the 2nd of January next year. Jupiter will join it in January; at the moment the big planet has only just gone behind the Sun and will spend most of December climbing out of the morning twilight. Its monthly meeting with the Moon occurs too close to the Sun to be seen, but it makes a close pass with Mercury on the morning of 22nd December, below Antares in Scorpius the Scorpion.

Eridanus is large constellation that has been around since ancient times. It starts near Rigel, one of the brightest stars in Orion, and meanders across the sky, much like a real river, all the way down to the star Achernar in the far south. Opinions differ as to which earthly river it is supposed to represent – some think was a celestial reflection of the Nile, others the River Po in Italy and a third possibility could be that it represents the Euphrates in the Middle East.

Achernar, the brightest star in Eridanus, actually means “end of river.” Southern Hemisphere observers might also know it as the bright star on the opposite side of the south celestial pole to the Southern Cross. It wasn’t always the end of the River; a star now known as Acamar (theta Eridani) once marked its end. This was as far south as the Ancient Greeks could see on their southern horizon. It is not clear when the length of Eridanus was extended so far south, but was most likely in the last few centuries, when European seafarers began to venture down into the southern hemisphere.

So if you find yourself enjoying a warm summers night, watching satellites go by, take some time to trace out the loops and bends of the river in the sky. 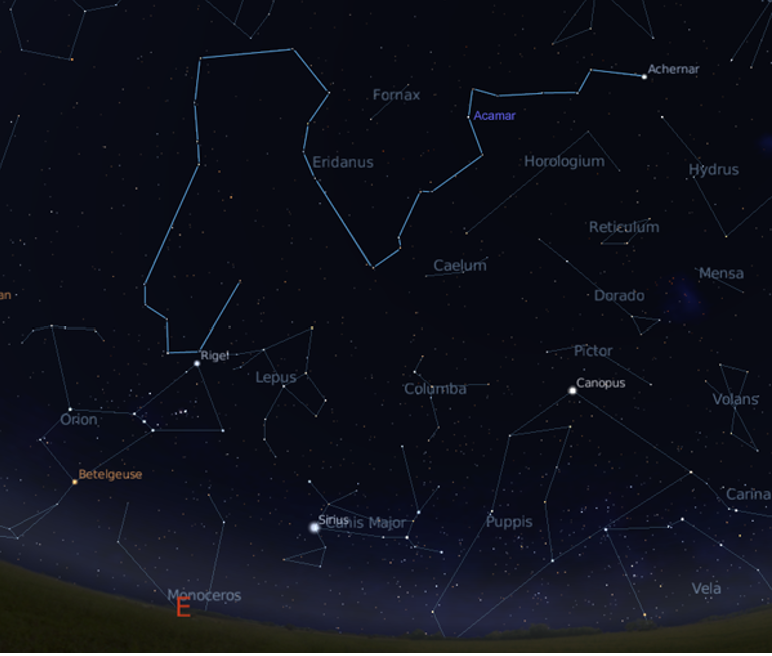 Eridanus the River starts at Rigel, the knee of Orion, and winds its way down to Achernar in the south.

Acamar is also known as theta Eridani, and it once marked the end of the River as seen from the north of Egypt in ancient times. It is also a double star, so if you have a small telescope you should be able to split this apart into its two components without too much trouble. They are both bright, white A-class stars, around 8200-9200 degrees on the surface, so they look very similar through the eyepiece. They lie about 160 light years away.

As well as having some historical significance, this star also makes a good marker to find the constellation of Fornax and the interesting Fornax galaxy cluster, but you will need at least an 8” (20cm) telescope, some good star charts and a dark and moonless sky to wander away from the banks of the celestial river and not get lost. 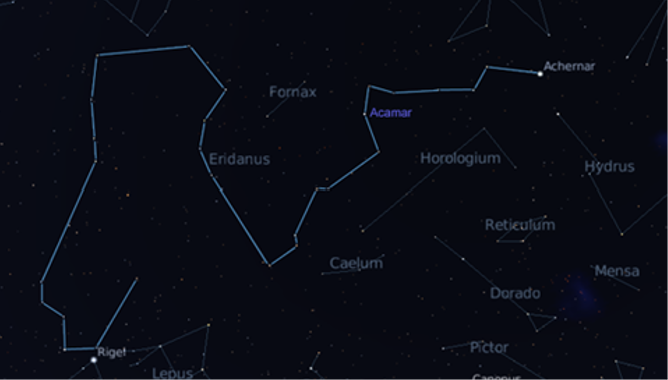 Acamar, also known as theta Eridani, can be found to the north of Achernar in the southern sky.

December 24th 2018 sees the anniversary of one of the most influential and memorable images to come out of the space race of the 1960’s, the one that is known as “Earthrise.” You’ve probably seen it before – it looks like a gibbous blue and white Earth is floating above the grey cratered surface of the Moon. 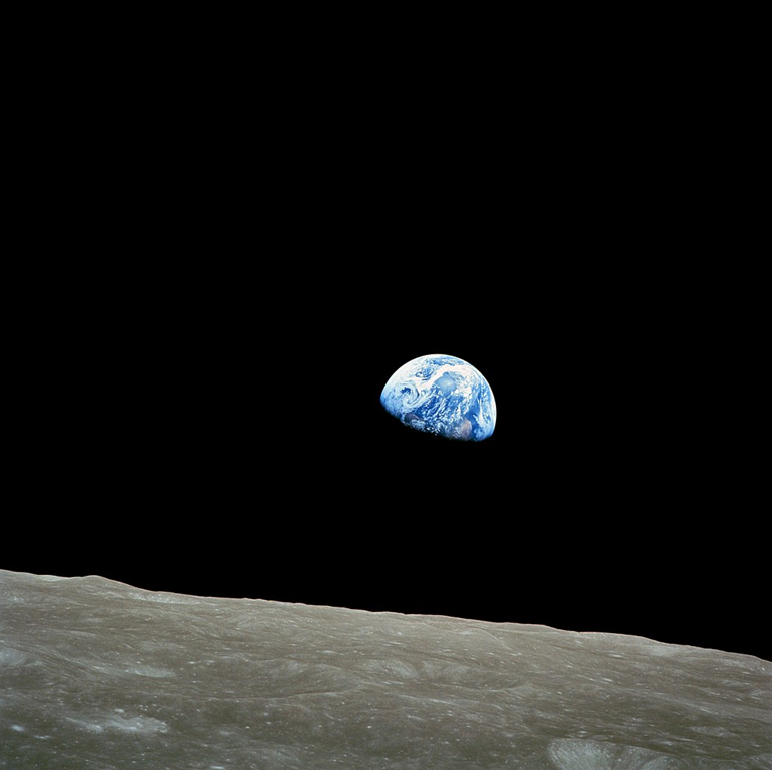 In fact, you should properly turn the image on its side (see below), as Apollo 8 was orbiting around the Moon and saw the Earth coming around the side. Apollo 8 was the first crewed mission to leave low Earth orbit and head out to the Moon, orbiting 10 times and then heading back, also making the three astronauts, Frank Borman, Bill Anders and Jim Lovell, the first men to see the far side of the Moon with their own eyes as well as seeing the Earth from a distance.

Astronaut Bill Anders also had to change the film in his camera from black and white to colour to catch it as well!

True selenophiles will know that the Earth doesn’t rise or set when viewed from one point from the Moon, as the same side of the Moon is tidally locked to always be facing the Earth. The Earth just seems to hover in the same location in the lunar sky and go through phases as you travel around it.

So perhaps on Christmas Eve you can take a moment to pause and look around you – at the blue sky, the brown earth, the green plants, and all the many animals we share it with – and remember just how amazing our own planet is.