Astrofest 2020 is happening on Saturday 29th February at Curtin Stadium, Curtin University, from 5.30-9.30 pm. Preregister at www.astronomywa.net.au to be in the running for some great prizes and also to see some photos of past Astrofest events. Even if it’s cloudy there will be lots to see and do!

Venus remains an easy target in the evening sky, holding at a steady height above the evening twilight, but have you noticed it starting to slowly drift northwards? It will continue to do this as the weeks go on, and the Sun also seems to head north along the horizon as well. If you turn a telescope towards it the view may be disappointing, as its thick clouds reflect so much light back towards us, but as the weeks go by and Venus moves towards us we should notice it getting larger and presenting more of a crescent shape towards us. Mercury is also on the evening side of the Sun, but quite close to the Sun and difficult to see. It will change over to the morning side of the Sun in March. 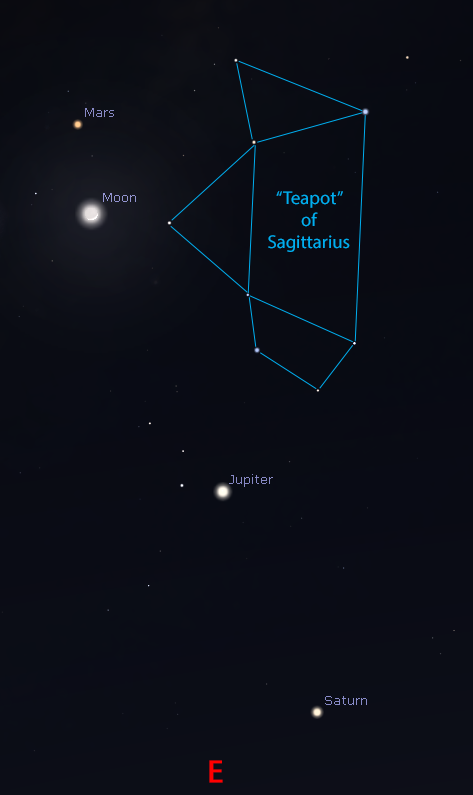 The three outer planets, Mars, Jupiter and Saturn, with the Moon on the morning of the 19th of February, as seen looking East around 5.45 am, before dawn.

Orion is one of the oldest constellations in the sky. He has always been known as a giant amongst the stars and he is visible to all people around the world, as he lies across the celestial equator.  Here in Australia we see him in the evening sky during the warmer months of the year.

Betelgeuse, often pronounced as “beetle-juice”, is a red giant star that marks one of the shoulders of Orion. Bellatrix is the star on his other shoulder. In the middle are three bright stars in a row that are known as the Belt of Orion. On the other side of these is a bright white star called Rigel (sounds like the name Nigel), which means “Knee”. Between the Belt and Saiph (meaning ‘sword’), which is the other knee, are three fainter stars in a row which are known as the sword of Orion.

There is a pattern within Orion is often called “the Saucepan” by Australians. Don’t confuse it with the big dipper, which is part of Ursa Major, the Great Bear, which is generally too far north for most Australians to see. The Saucepan uses the belt of Orion as the base and the sword of Orion makes up part of the handle, which extends out to Saiph.

There is a meteor shower that radiates out from an area in the northern part of Orion in late October. Known as the Orionids, it is caused by the Earth intersecting the debris stream of dust that comet Halley leaves behind. 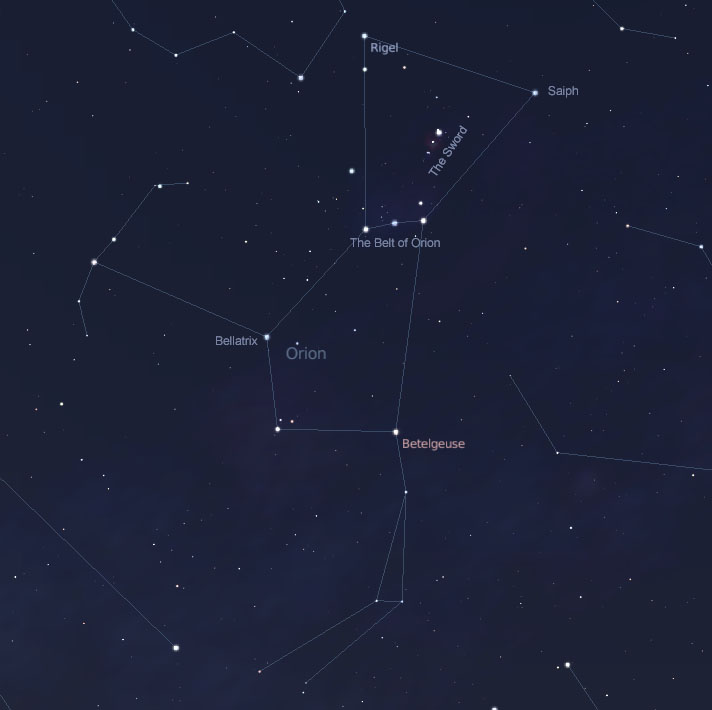 Betelgeuse, also known as alpha Orionis, is the bright, reddish star on the right shoulder of Orion. We know a fair bit about this famous variable star, usually the 11th brightest star in the sky. Usually? Well, yes, usually it is, but compared with its “usual” periodic pulses the latest dip in brightness is the dimmest seen in the last 70 years or so. This has got astronomers excited, but despite the hype you might have heard, it’s not about to explode.

We know it is a red giant star, with about 15-20 times more mass than our Sun. It has swelled up enormously as it nears the end of its life, and is now as wide as the orbit of Jupiter – about 1.5 billion km in diameter. It’s so big that it was the first star that astronomers were able to image directly, other than our own Sun (but it’s still nowhere near the biggest star in the known universe). Its end should be spectacular, though, as it’s expected to explode as a supernova any time within the next 100,000 years. That’s not very long in stellar terms, that’s “soon,” but perhaps not soon enough for us to witness in our lifetimes. We can hope though, and that’s what some people have been doing.

Betelgeuse was first noticed as a variable star in the modern era by Sir John Herschel, son of William Herschel, in 1836. A variable star is a star that changes in brightness over time, and there are many reasons why a star may do this. Our own Sun is a variable star, with a cycle that averages about 11 years, so variability in stars is not uncommon. There are records of Betelgeuse’s brightness going back over 100 years, and you can access this data as well though the publicly available database hosted by the American Association of Variable Star Observers. In the extract pictured below, we can see Betelgeuse had a similar deep dip in brightness, to almost magnitude 2, in the late 1940’s, before brightening back up to what we would consider “normal.,” about magnitude 0.

Some astronomers think Betelgeuse will return to normal brightness sometime in March. In the meantime, don’t be alarmed, or confused, by what you see in the sky. But do be amazed to be watching physics in action, and a bit of history in the making, and you can say you where there, and you saw it! 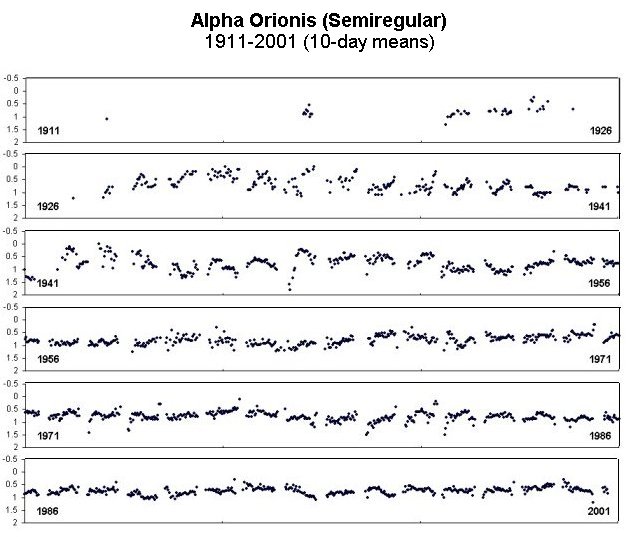 Betelgeuse was actually dimmer than it was now in the late 1940’s for a time. Credit: AAVSO

90 years since the Discovery of Pluto

Pluto was discovered by Clyde Tombaugh on 18th February, 1930. Pluto has travelled a just over a third of its 248 year orbit in that time, and we have learnt a lot about it, too. We have even managed to send a spacecraft to flyby it.

Tombaugh found it by comparing photographs of the same part of the sky taken several days apart and looking for anything that had moved in the images. These days we would get a computer to do this work, but back then Tombough had to do it himself, using a device called a “blink comparator” that shifted his view back and forth between the two images quickly. It required a lot of concentration and was mentally tiring, especially after he had stayed up all night taking pictures of the sky. 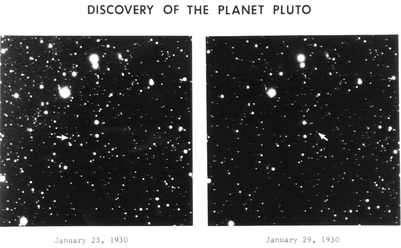 Initially it was thought Pluto was as big as the Earth, but over time they realised it was smaller, and as time went on it got smaller still. We now know it’s smaller than our Moon, about 2,300 km across. But despite this, the New Horizons spacecraft showed us it is still a geologically active world, with cryovolcanoes, a huge glacial sheet made of nitrogen and carbon monoxide in the shape of a heart, and it has a thin atmosphere of nitrogen surrounding it as well. It also has five moons, with the chaotic movement of the smaller ones indicating there was a collision of some kind in the distant past.

This intriguing body is among the largest objects in the Kuiper Belt, a ring of large bodies out beyond the orbit of Neptune. They are sometime referred to as Trans-Neptunian Objects, or TNO’s for short, as well. They are definitely part of the solar system, and some of them look like small planets – the question is, what kind of planets? The debate isn’t over yet.

Pluto was found in the direction of Gemini, near the star delta Geminorum, but now it is the eastern part of Sagittarius. In fact, Jupiter will spend most of the year close by, so when you gaze up Jupiter in the later winter skies you will also be looking in the right direction for Pluto! 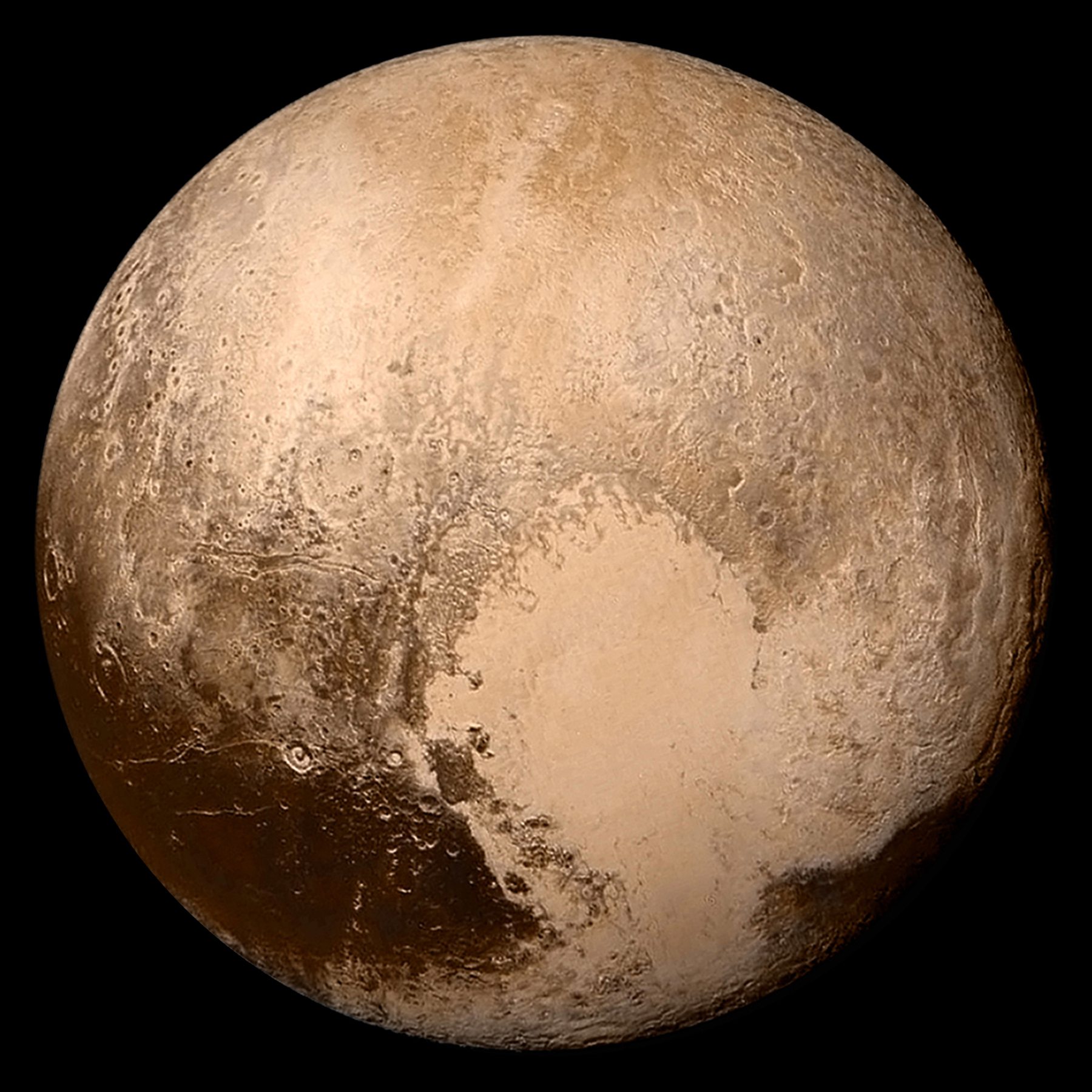 Pluto as imaged by New Horizons as it flew by in July 2015 Credit: NASA/JHUAPL/SWRI