The latest sunset of the summer occurs on the 5th January, when the Earth reaches perihelion, or the closest point in its orbit to the Sun. However you probably won’t notice the evenings growing noticeably shorter until February – although the time for sunrise should have changed by about half an hour during this time.

While you’re out there enjoying the warm summer evenings, find out what satellites will be visible from you location by checking out www.heavens-above.com It’s also available as an app for your phone or tablet. Satellites will be visible nearly all night long, especially during the first weeks of January, when the Sun is still near its southern extremity and not all that far below the horizon – at least not from a satellites high point of view.

Did you vote in competition to name a star and its exoplanet last year? The results have been announced! Australia’s star HD 38283 in the constellation Mensa will be called Bubup and the exoplanet will be YanYan. The names come from the Boonwurrung language used in the Kulin Nation in Victoria and mean “child” and “boy.” Further exoplanets that may be found around this star will be named along the theme of family. To see the results for all the countries participating go to www.nameexoworlds.iau.org/final-results

We’ve been a bit spoilt the last half a year with both Jupiter and Saturn to look at after sunset but now they have gone behind the Sun and we are just left with Venus in the evening sky after sunset. Venus will do its job as the evening star right up until May this year, so we’ll get to see a lot of it in the coming months. Mercury makes an unfavourable appearance in the evening twilight near the end of the month – look for it below the Moon on the 26th of January.

Mars rises around 2am now, but will still look small in a telescope. Jupiter climbs out of the morning twilight around mid-month and is rising by 3 am at the end of January.

Saturn is out of view for most of January, lost in the Sun’s glare. It will return to the morning skies in February.

This is not meant to be the orange boggle-eyed fish you’re used to seeing in a small bowl on the kitchen table, but rather a large tropical fish with a metallic-coloured skin.  It was introduced to the sky by two Dutch navigators, Pieter Dirkszoon Keyser and Frederick de Houtman, who had watched it leap from the water to chase flying fish, which is why it is next to the constellation Volans, the Flying Fish, in the sky. (Incidentally, this is the same de Houtman that the Houtman Abrolhos, of the coast of Geraldton, are named after.)

Although it is a relatively faint constellation it contains the greater part of the Large Magellanic Cloud, the largest of the satellite galaxies to our Milky Way – the other half is in Mensa, which represents Table Mountain at the Cape of Good Hope in the Republic of South Africa. The misty look of the Large Magellanic Cloud is supposed to be the cloud that often sits on top of the terrestrial mountain at the Cape.

The huge Tarantula Nebula is within the constellation boundaries, too, (see below for more information) and nearby is the location of Supernova 1987a, the closest supernova to occur since the invention of the telescope.

It also contains the ecliptic pole, just off the end of the tail of the fish. This is the point that wobble of precession rotates around. 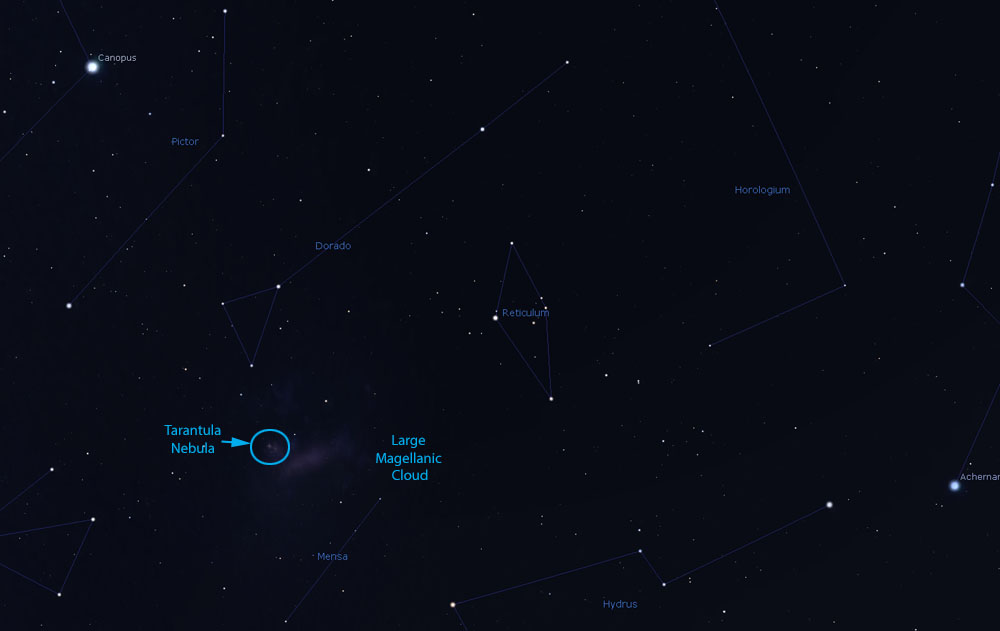 Dorado lies in between the bright stars Canopus and Achernar, the Large Magellanic Cloud under its tail.

To one side of the Large Magellanic Cloud is a large, bright knot of gas known as the Tarantula Nebula. In the past is was also known as 30 Doradus, and if you have a goto telescope you’ll need to know it’s also called NGC 2070.

It’s not too hard to see how this nebula got its name; even in a small telescope the bright cluster of stars at the centre, the eyes of the spider, are surrounded by large loops of gas that look like legs. If you don’t agree, let your imagination loose – what do you see?

This is an emission nebula, a place where new stars are being born, and it is lit up by a cluster of super giant stars. The nebula, made up of mainly hydrogen gas, is super giant as well, at nearly 1000 light years in diameter – which is nearly seven times larger than the Great Orion Nebula, M42. If it was as close as the Great Orion Nebula it would fill the whole constellation of Orion and cast shadows here on Earth, there wouldn’t be much of a night as we know it now! The Tarantula Nebula is truly an impressive monster. Perhaps it’s a good thing it’s so far away then. 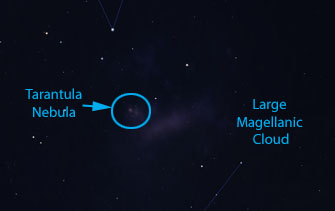 The Tarantula nebula is easy to find as a small, bright knot of light to one side of the Large Magellanic Cloud. 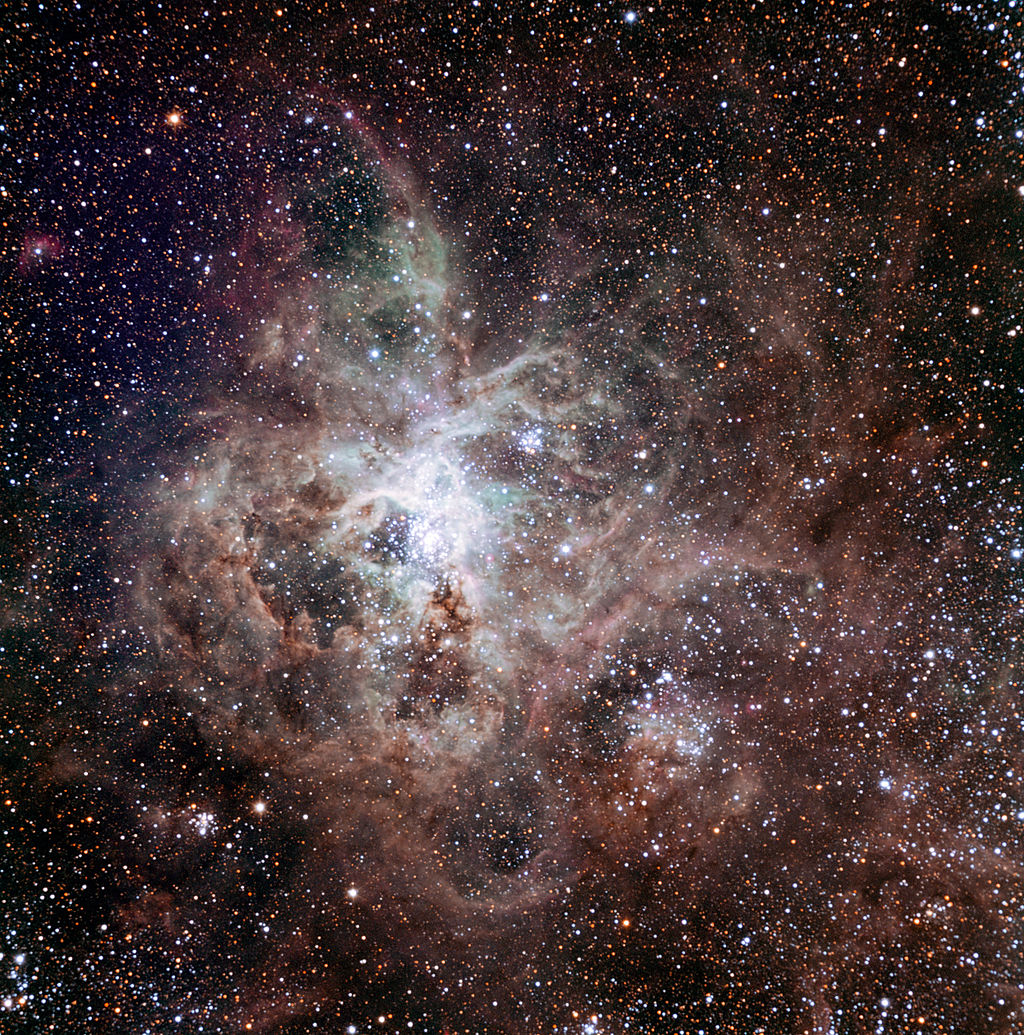 A cluster of super giant stars light up the nebula from the inside, where many new stars are being born.
Credit: TRAPPIST/E. Jehin/ESO – http://www.eso.org/public/images/eso1023a/

Penumbral Lunar Eclipse for the West

Partnering up with the Annular Solar Eclipse back on 26th December 2019 is a penumbral lunar eclipse on the morning of 11th January for Australia.
A Penumbral eclipse is where the Moon only enters the partial shadow of the Earth, not the full shadow. It will look darker on one side, but won’t go that coppery red colour of a full eclipse. 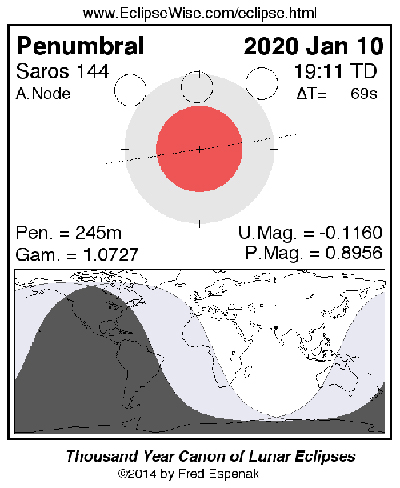 The white are is where the eclipse will be fully visible. The parts of Australia shaded gray will see the Moon set while the eclipse is in progress.

The west coast of WA gets to see the whole sequence of this eclipse, but in other parts of Australia the Moon will set while the eclipse is in progress. The whole event will last about 4 hours (see figure below), but if you don’t want to stay up for it all, it might be best to just set the alarm for the mid-point around 3 am, then duck outside for the main event, before heading back to bed for more sleep. Lunar eclipses aren’t the speediest of celestial events so unless you are trying to capture a photographical time-lapse sequence you might not need to force yourself to stay awake for the whole time.

The start, middle and end times for Perth, WA, for this penumbral lunar eclipse. From www.timeanddate.com

This is the first of four penumbral lunar this year – we don’t get to see any total lunar eclipses in 2020. Of the four Australia only gets to see three of them, and this first one has the best circumstances. You can find our more at eclipsewise.com and TimeandDate.com