January brings us to the latter half of the season Birak, a time of warm days and cloudless evenings, so this should make for some nice stargazing. The eastern sky after sunset this month still contains the star(s!) of the show. Orion and Taurus are now nicely visible immediately after sunset, and the Argo Navis trio – Carina, Puppis and Vela are distinct in the southeast. In the northeast you can see Gemini and Cancer in the hours after sunset as well. 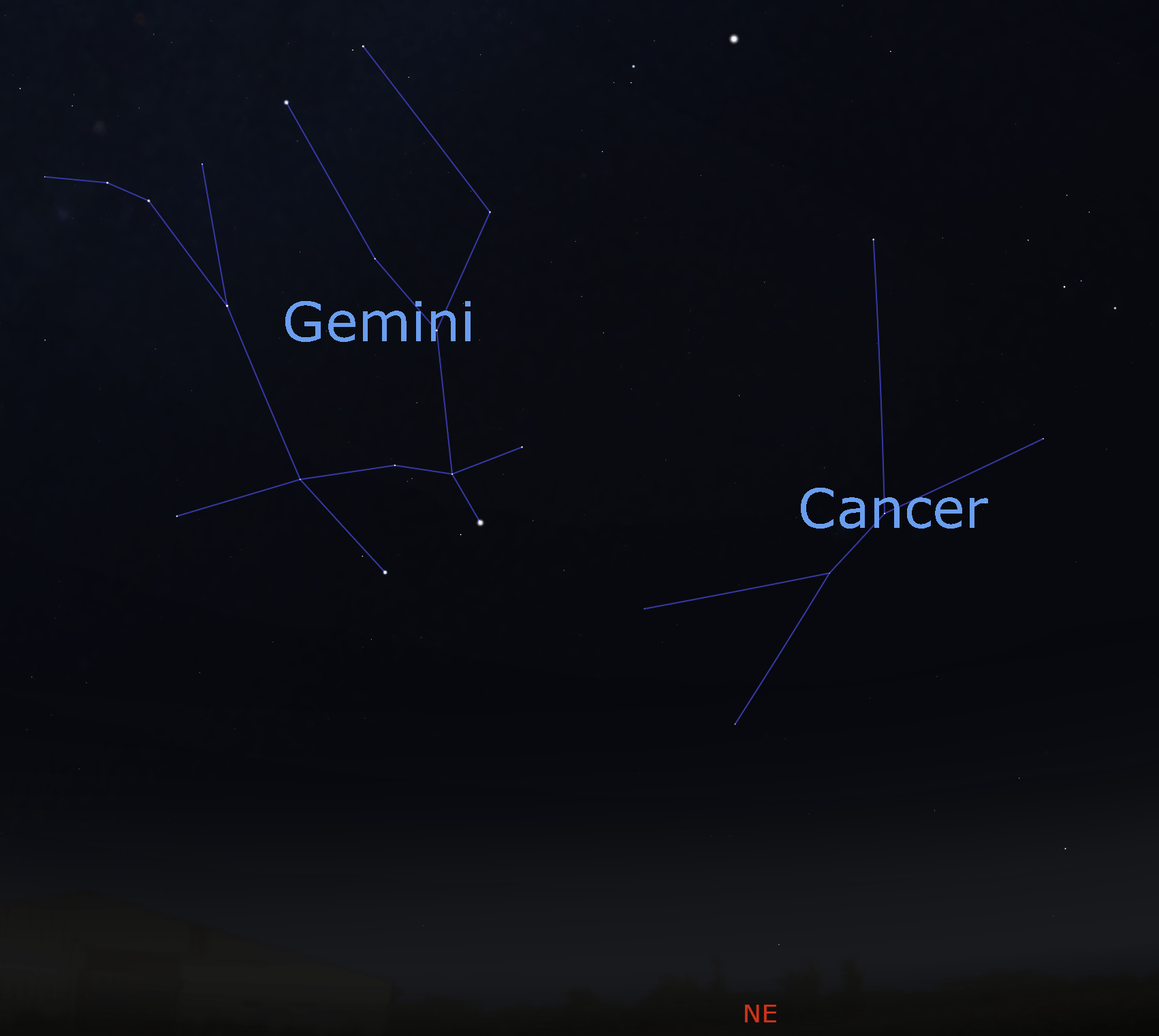 Saturn is rapidly fading in the west, visible for only a short time after sunset, so now is your last chance to see it before it disappears from the evening sky for a while.

The summer sky is great for spotting satellites overhead. During summer the stars visible in the east make such easily recognisable patterns that anything that isn’t a star is very easy to spot.

Eventually a satellite will either move over the horizon or pass into the Earth’s shadow. In the latter case it will disappear mid-flight, apparently vanishing into the sky. It’s still there, but the only reason we could see it in the first place is because it was illuminated by the sun. When it moved into Earth’s shadow it was no longer lit up and hence why you can’t see it anymore.

On a good night you might see a satellite every few minutes in the hour or two after sunset. If SpaceX have launched a Starlink batch recently you might see a Starlink train. As interesting as these are to look for casual observers, they are the bane of the modern astronomer, often ruining exposures and interrupting research. 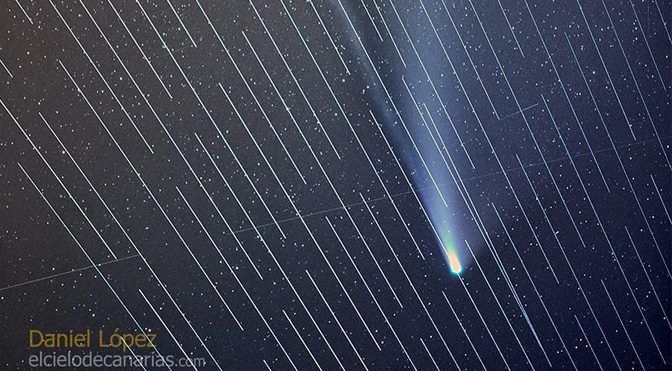 The International Space Station passes overhead multiple times a day. Most of these passes are too faint to see but a couple of notable sightings are:

Table: Times and dates to spot the ISS from Perth

Source: Heavens above, Spot the Station

Venus and Saturn are both visible in the eastern sky after sunset, passing extremely close to each other on Jan 22 and joined by the waxing crescent moon on Jan 23. Saturn will soon depart from the evening sky for a while – Earth’s orbit will soon position us on the opposite side of the sun to the ringed planet – so make sure you get a last look at it before it’s gone for a while. 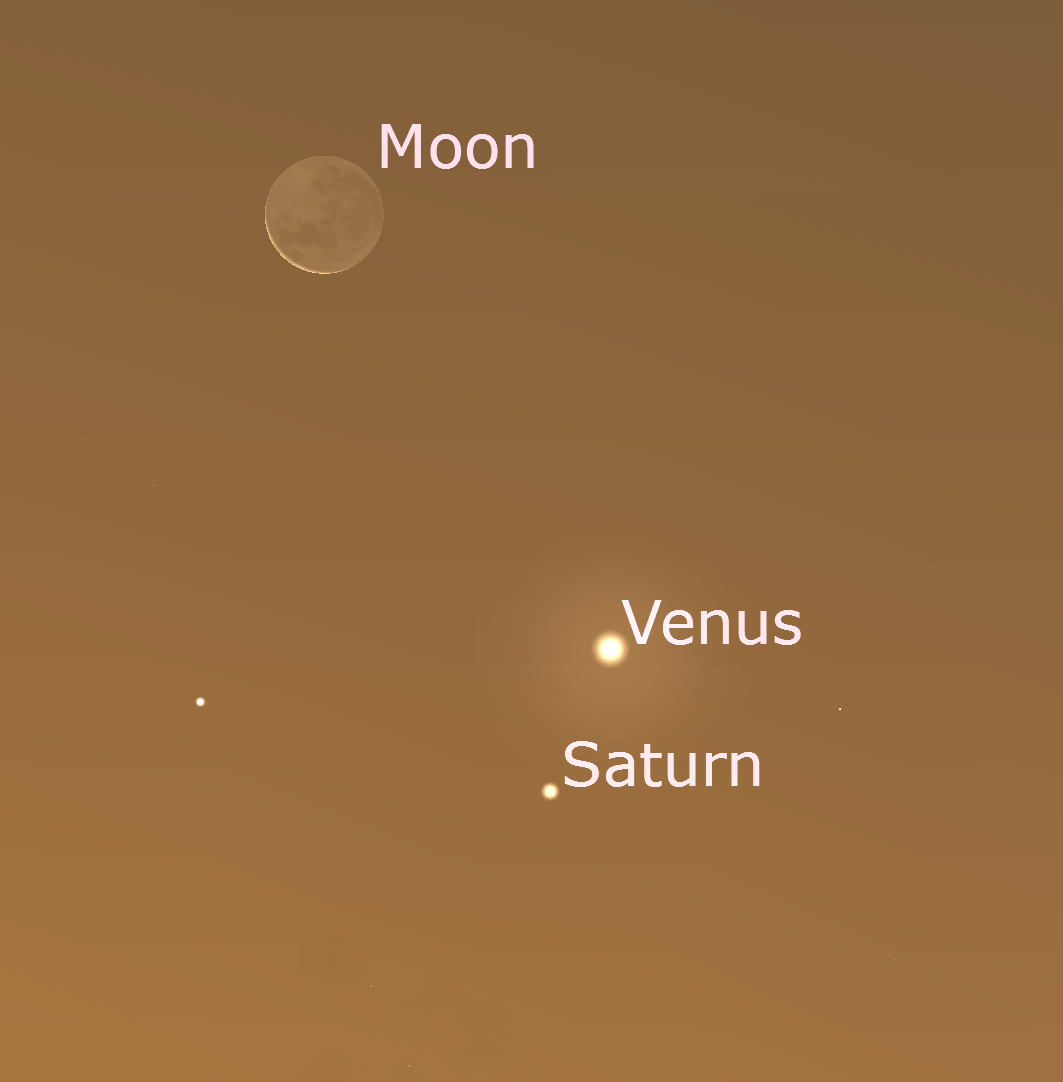 Image: The waxing crescent moon Joins Venus and Saturn in the East on Jan 23

Jupiter continues to be easily visible in the north-western sky from sunset until it sets around 9:15pm. Mars shines brilliantly the whole month up in the northeast after sunset, backdropped by nearby Taurus and Orion. Late in the month, Mercury makes an appearance in the eastern sky in the hour before sunrise; you’ll have to be up early if you want to catch it.

Chameleon is a faint constellation in the far southern sky and the tenth smallest overall. It was first added to star charts in the late 16th century by Flemish astronomer Petrus Plancius.. With the brightest star in the constellation, Alpha Chameleontis, reaching only magnitude 4.1 it is easier to ‘hop’ to Chameleon by first starting at the Southern Cross, then tracing through Musca to arrive at the destination. 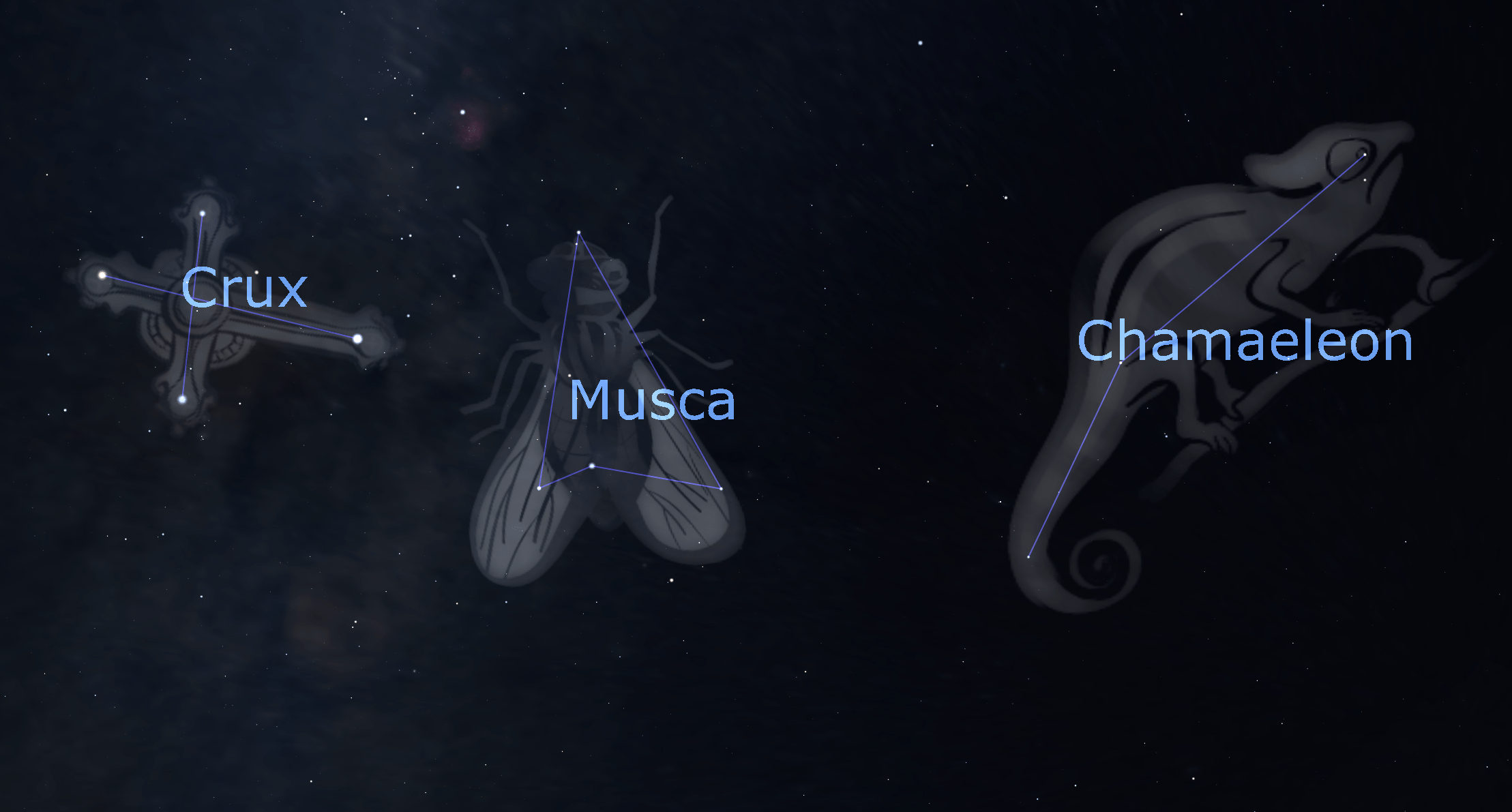 Chameleon is home to the Chameleon Dark clouds, three distinctive  dark nebula (called Cha 1-3) in the process of forming new stars and containing many T Tauri type stars. T Tauri stars represent the late-stage evolution of a collapsing cloud of gas in the process of forming a star. Temperatures in the core are not yet hot enough to initiate nuclear fusion, so the star shines entirely by the energy released from gravitational potential as the object collapses.

As the object continues to collapse over millions of years, nuclear fusion will begin, and the star will enter the main sequence.

Theta Tauri – Looks can be deceiving

Theta Tauri is a double star in the constellation of Taurus. Even to the naked eye it is easily discernible as two separate stars, called Theta 1 Tauri and Theta 2 Tauri. Both stars are members of the Hyades cluster that forms most of the distinct shape of the Taurus constellation. 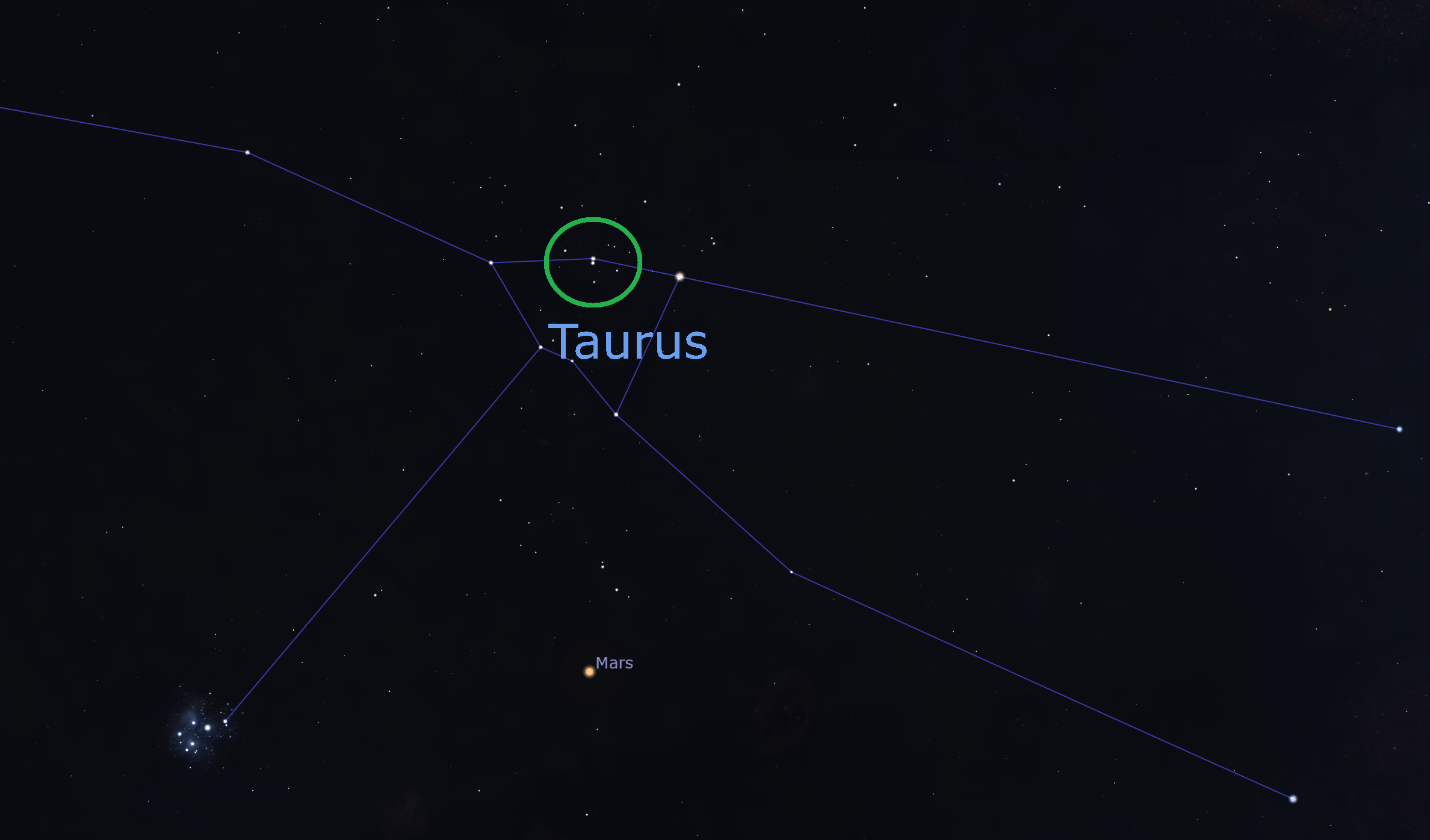 Despite being part of the Hyades and visually close together as viewed from Earth, the stars are separated by about 5 light years and are not orbiting each other. Their apparent pairing is a coincidence as viewed from our line of sight on Earth. Interestingly though, both ‘stars’ are themselves revealed to be binary systems, both consisting of a bright giant star and a fainter companion.

This year’s show, “A Perfect Match” explores the perfect circumstances, cosmic coincidences and fateful encounters that occur across the universe and compares these to the relationships we have with the people in our lives.

“Dome Date Night is a singularly beautiful and thought-provoking experience.” 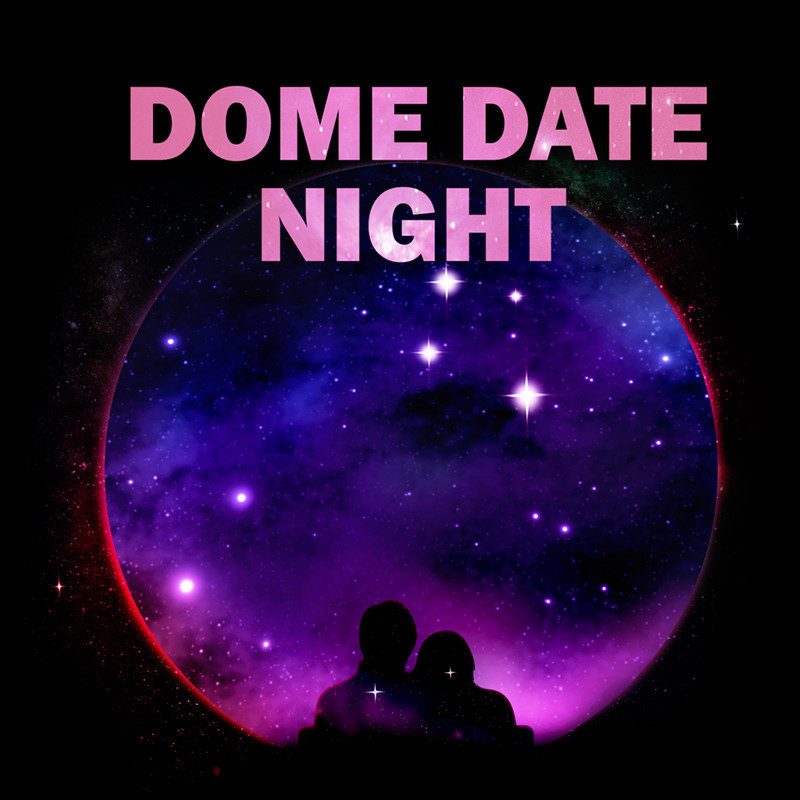 Construction has begun on the Square Kilometre Array in the Australian outback.

The Carnarvon Tracking Station has been leased by Canadian company ThothX with the purpose of communicating with satellites in geostationary orbit.

A coolant leak on Soyuz MS-22 may have been caused by a micrometeorite. Currently it is unsure if the spacecraft is still useable.