As we approach the middle of the year the Milky Way is shining high up above. Winter is the best time of year to see the full glory of the galaxy, so now is the time to go camping while the school holidays are on. Of course, the irony is that this is also the wettest time of the year with Makuru in full swing, so don’t be upset if the clouds get in the way of your view.

The bright central regions of the galaxy are illuminated by tens of billions of stars. So many stars in fact that our eyes can’t resolve individual points, and instead the whole thing just blurs together, looking like someone has been splashing milk all over the sky. 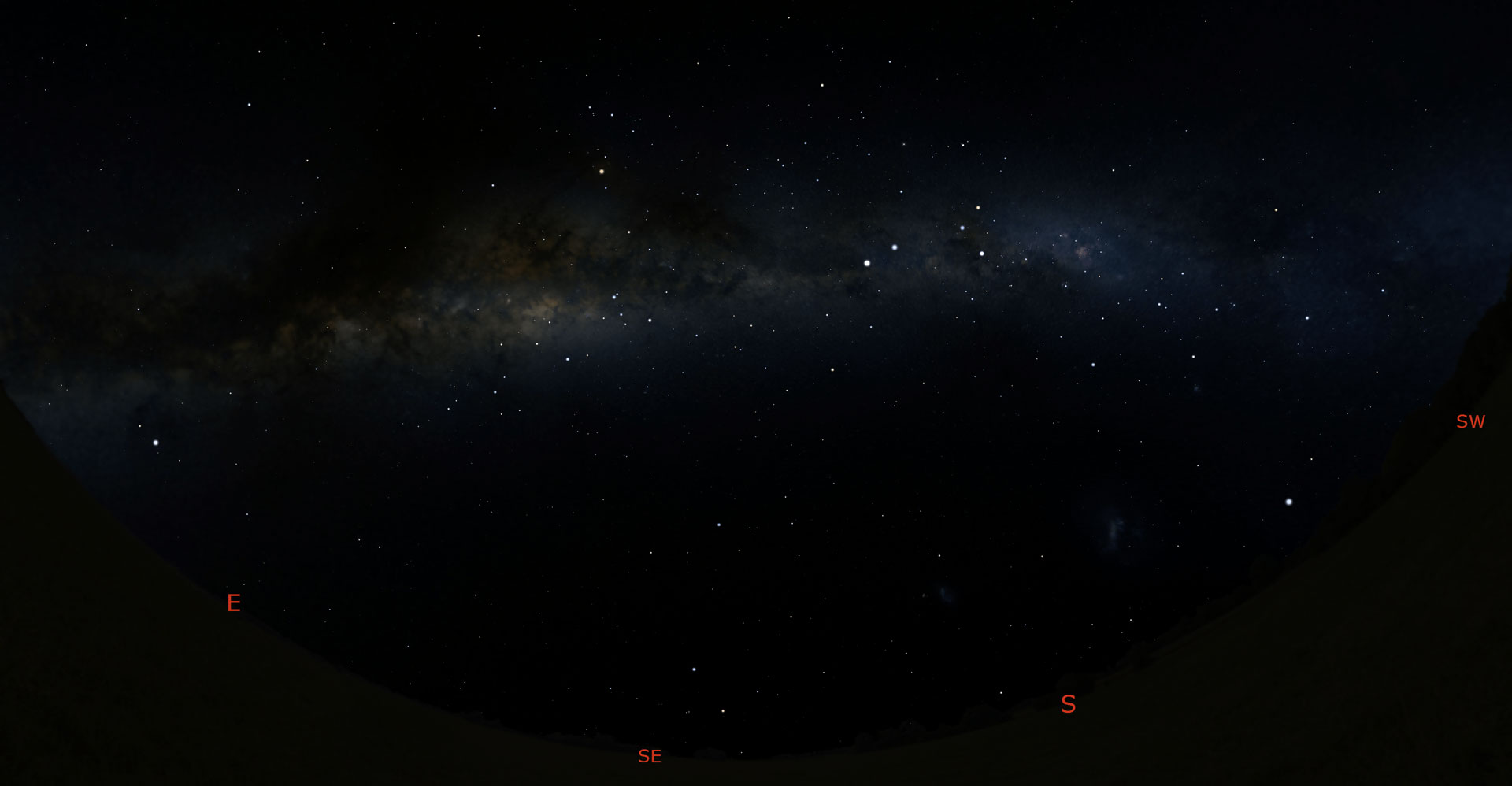 Image: The central regions of the milky way will be stretching across the sky this month.

At about 6am each day you’ll see Saturn, Jupiter, Mars and Venus stretching across the sky. Uranus and Neptune are there as well but you will need a telescope to see them. They are all joined by the waning moon from the 14th onwards. Like last month, the full moon in July is also a supermoon.

What’s in a name?

Incidentally, the word ‘galaxy’ has its origins in the Greek word ‘γάλα’ (gala), meaning ‘milk’. Ancient Greeks referred to the ‘Galaxias Kyklos’ – the ‘Milky Circle’. The word in turn influenced the Latin word ‘lactea’ and eventually led to our current word ‘lactic’, meaning ‘of milk’. The things you learn.

A great step for the Australian space industry took place in the early hours of June 27th when a NASA sounding rocket was launched from Arnhem Space Centre.

Liftoff! 🚀 The XQC mission is on its way to suborbital space to measure X-rays coming from the inner part of our galaxy. The entire flight lasts around 15 minutes before the payload safely parachutes back down to Earth. pic.twitter.com/SpcwzNDYhC

The 13m tall rocket’s 15-minute flight carried it about 250km into space, collecting data on X-rays originating from the interstellar medium – the extremely sparse gas and dust that lies between stars. Two more launches planned for July 4 and July 12 will study the Alpha Centauri star system, the closest star system to the sun. This star system is not observable from most of the northern hemisphere, but is an icon of the Australian night sky, making this the perfect place to study it.

Before sunrise is the best time to look for planets this month as Venus, Mars, Jupiter and Saturn put on a show from east to west.

Venus is easily visible in the eastern sky in the early morning. Its orbit is carrying it to the other side of the Sun from Earth, meaning it is rising later each day and there is an ever-narrowing window to see it before the Sun rises and drowns it out.

Image: The pre-dawn sky offers a nice view of the easily visible planets.

Saturn rises about 9pm each night and as Earth catches up to it in its orbit, this rise time will continue to get earlier and earlier. Jupiter joins the show at about midnight, much brighter and more easily visible than Saturn.

If you’re up very late or very early you will see Mars rising in the eastern sky at about 3am.

Circinus (sir-sin-us) is a small and easily overlooked constellation in the southern sky. Its asterism is only three faint stars, representing a drafting compass, located next to the much brighter Alpha and Beta Centauri. 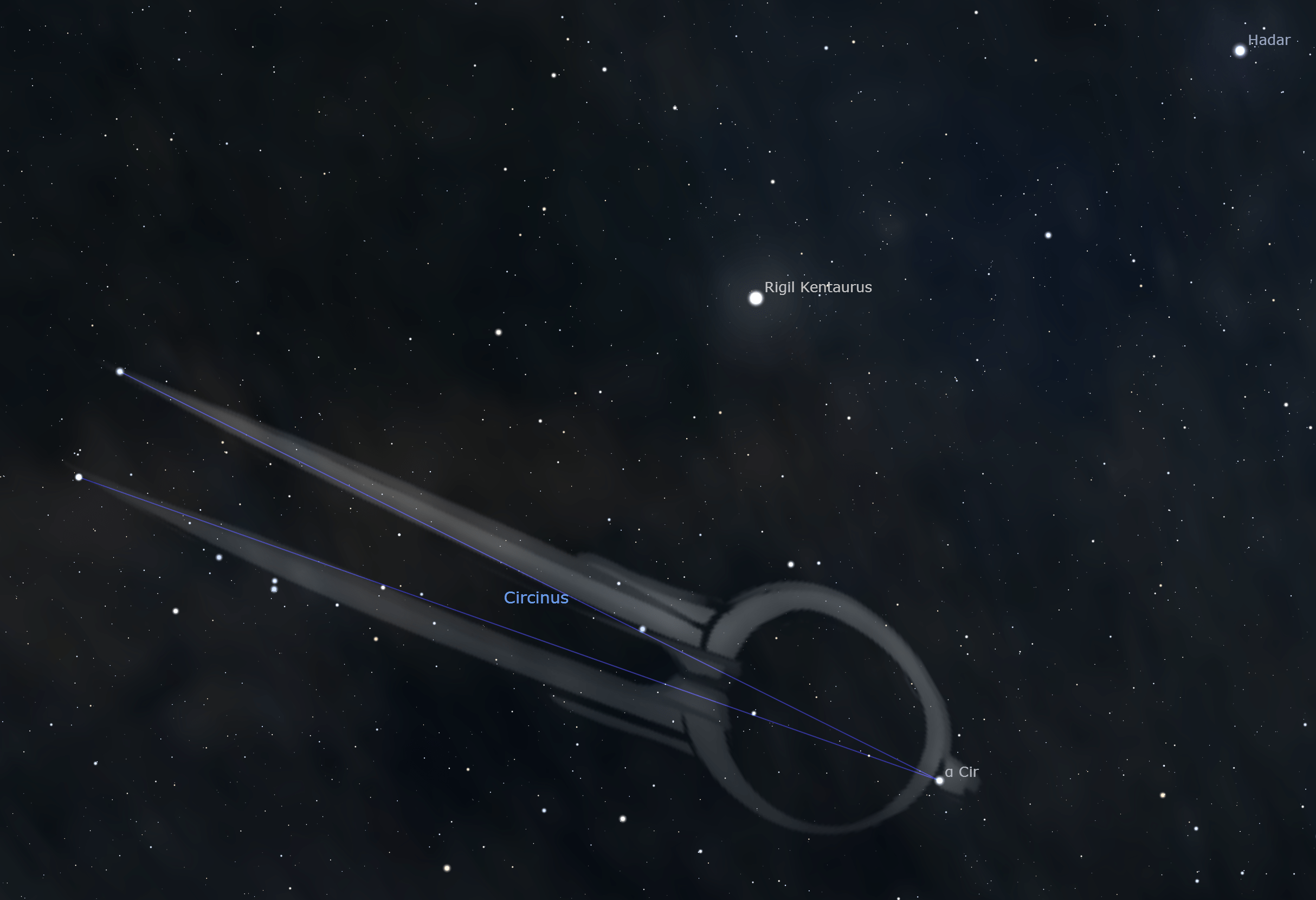 The plane of the Milky Way passes right through Circinus, so for such a small constellation it is surprisingly busy with activity, containing several open clusters and a planetary nebula inside its boundary.

Circinus is also home to the fascinating Circinus Galaxy. The galaxy was only discovered in 1977 because it’s line of sight is just above the Milky Way making it difficult to observe. 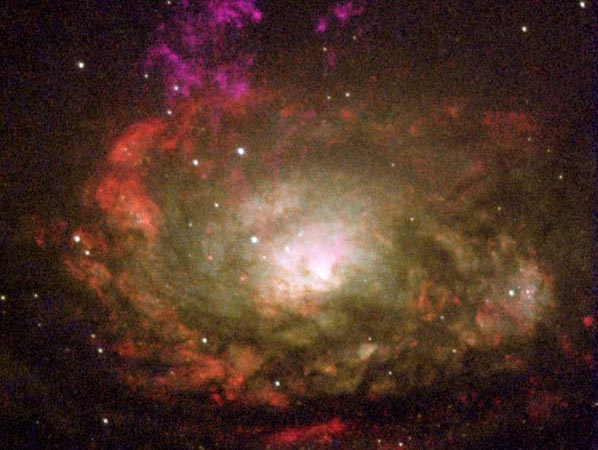 Spectral analysis of Seyfert galaxies suggests that the bright emissions are related to extremely hot, fast moving gas. Seyfert galaxies, along with even more distant and luminous quasars, have lead astronomers to develop the concept of an active galactic nucleus. 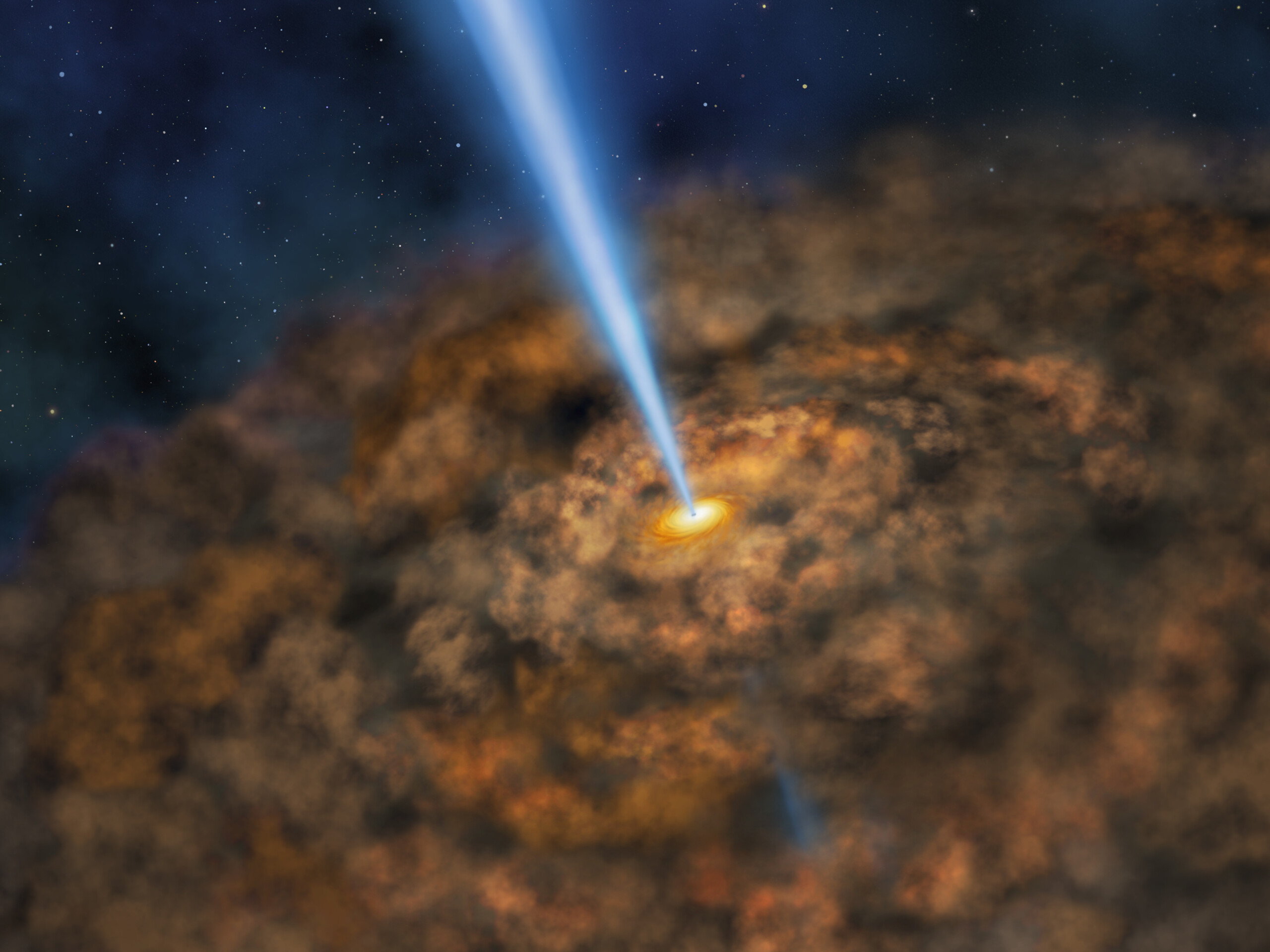 Current thinking is that the active galactic nucleus is driven by a supermassive black hole that is actively interacting with material in an accretion disk. The extreme conditions in the accretion disk and surrounding space have a tremendous effect on the galaxy and can cause emissions powerful enough to be seen across space. This creates the amusing irony that supermassive black holes are some of the brightest things in the universe. Detailed models of the active galactic nucleus are an area of active research in astrophysics.

AX Circinus is a binary star in Circinus of magnitude about 6, putting it right at the limit of visibility to the naked eye. By itself it doesn’t appear to be particularly remarkable to look at, however the primary star, AX Circinus A is notable for being a classical Cepheid variable star. 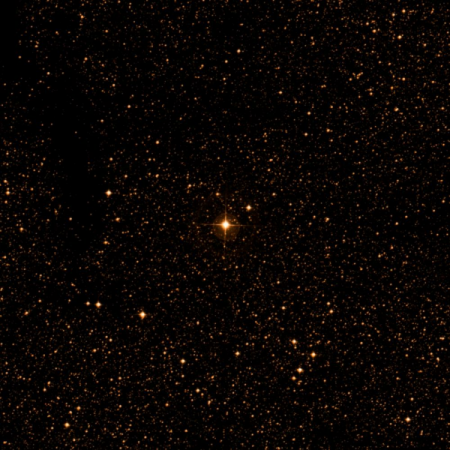 Cephid variables are stars that get brighter and dimmer in a predictable and periodic fashion and were first identified by Henrietta Swan Leavitt in 1908. Ionised helium in the star’s atmosphere absorbs light emitted by the star, causing the star to dim. It also makes the helium hotter which then expands, cools and neutralises. As the gas neutralises, it stops blocking the light from the star, causing the star to get brighter again. The cool unionised helium sinks back into the star, heats up again, re-ionises, and starts blocking light once more and the process repeats. Almost like a pulsating heart in the sky. 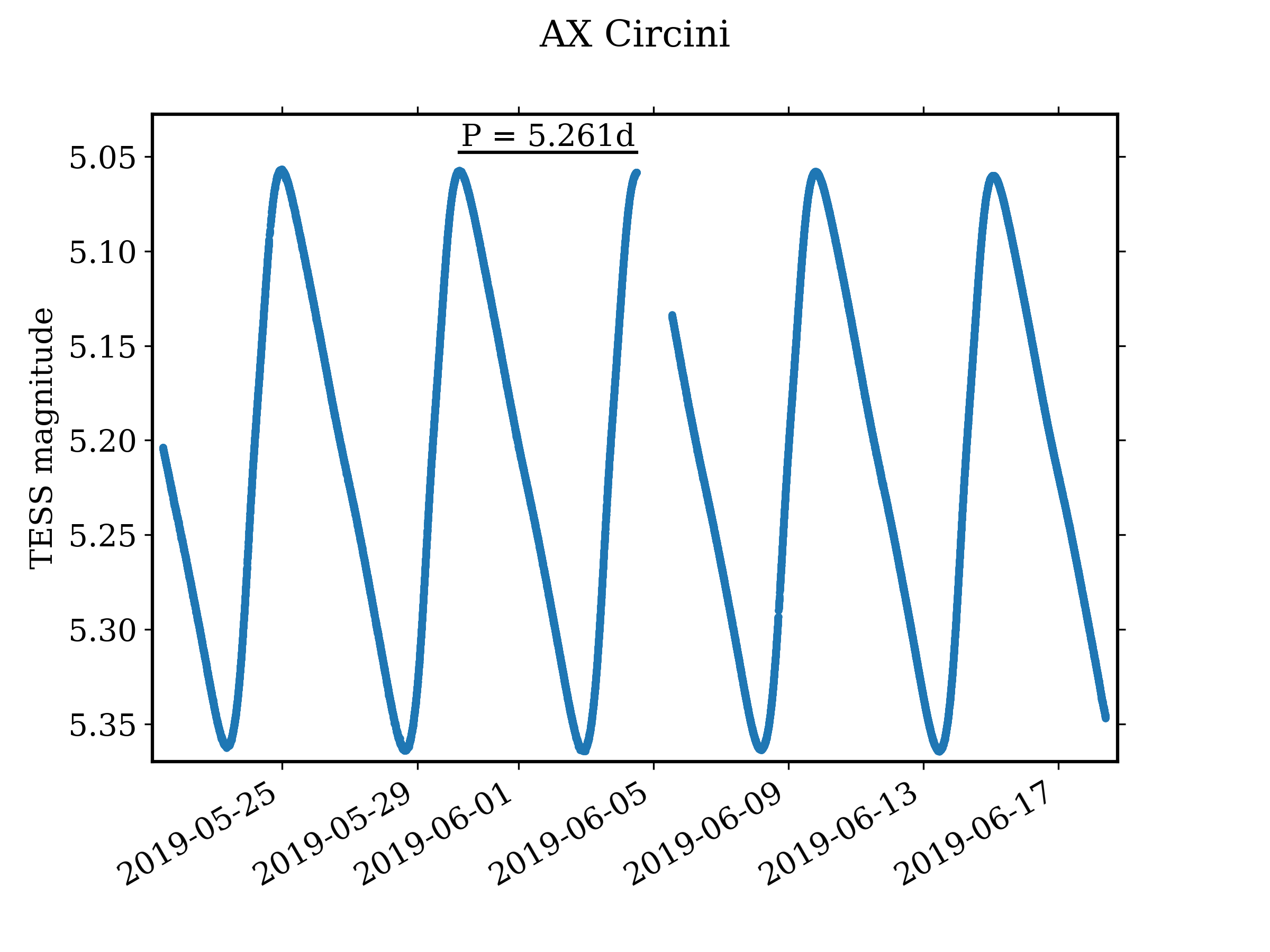 Fascinatingly, there is a direct relationship between the absolute brightness of a Cepheid variable star and how long it takes to pulsate in brightness. This means that astronomers can measure the absolute brightness of a star simply by timing how long it takes to pulsate, something much easier to measure. Once you know how bright a star is, it’s not hard to figure out how far away the star is. Measuring distances to objects in the universe is hard, so Cepheid variables are a blessing to astronomers to help them map distances to stars and galaxies across the universe.

In 1929, Edwin Hubble compared the distances to far off galaxies, as inferred by Cepheid variables, against the speed that the galaxies were moving, and concluded that the further away a galaxy is from us, the faster it is moving away from us. This observation forms the basis for the discovery that the universe is expanding. All inferred from a shining heart in the sky.

Image: The further away objects in the universe are from us, the faster they are moving away from us. Hubble’s original data, and more modern studies pictured. This is evidence of a uniformly expanding universe.

On June 28th NASA’s microwave-sized CAPSTONE spacecraft was launched from New Zealand by Rocket Lab and is currently on its way to the Moon. CAPSTONE stands for Cislunar Autonomous Positioning System Technology Operations and Navigation Experiment and is intended to be a test spacecraft for the orbit of the planned lunar space station Gateway. That’s quite a sentence so let’s unpack it. 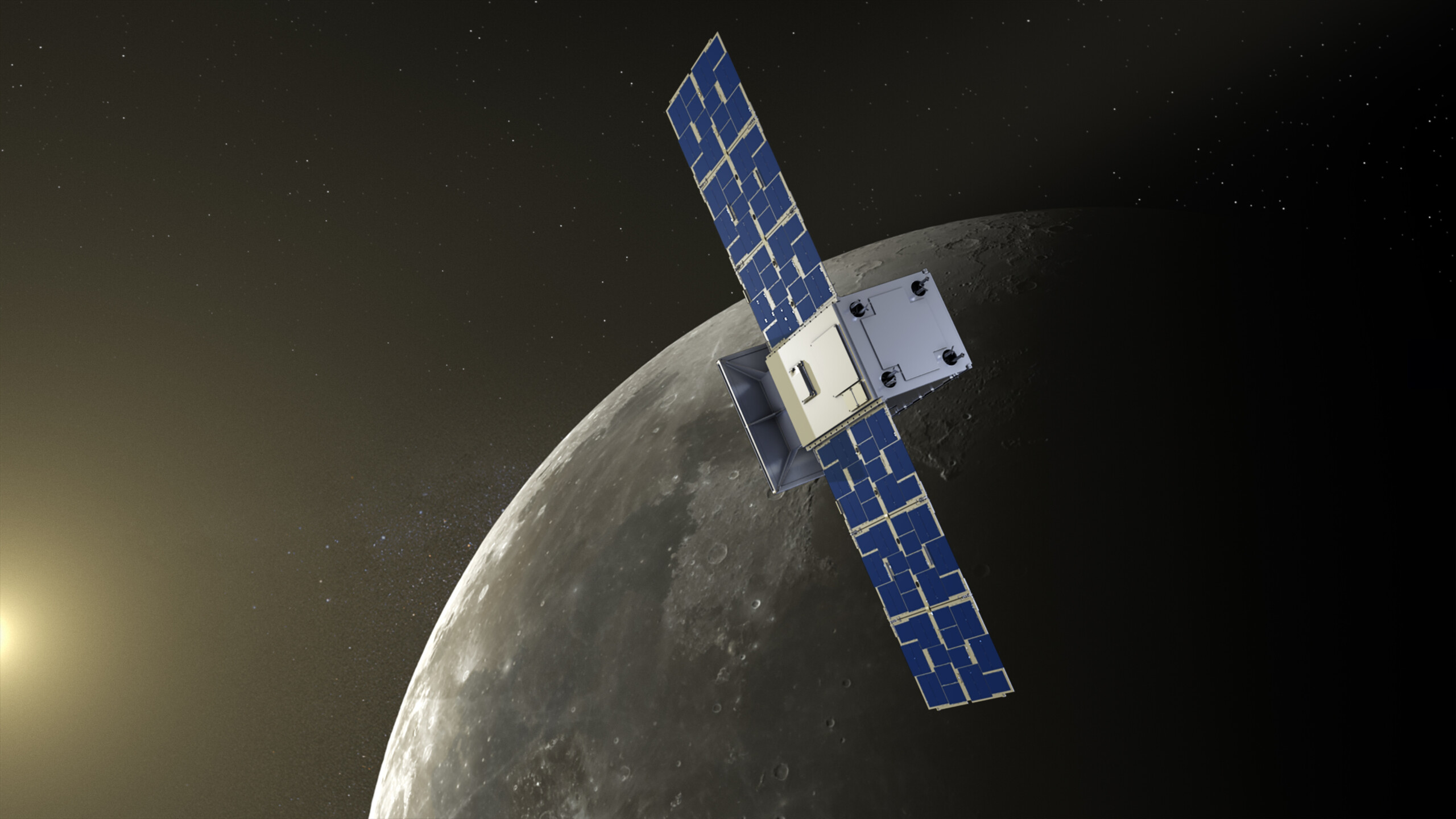 Image: Artist impression of CAPSTONE near the Moon

NASA’s Artemis program intends to use the Space Launch System to send astronauts to the Moon sometime later this decade. Rather than a ‘direct to Moon’ flight, like the Apollo missions in the 1960s and 70s, the intention is for the Artemis missions to dock with Gateway, a not-yet-built space station orbiting the Moon, before descending to the lunar surface.

And this is where CAPSTONE comes into it. The spacecraft will test that the intended ‘Near Rectilinear Halo Orbit’ for Gateway around the Moon is as well behaved as predicted before we place an expensive space station there. The week-long orbit is highly elongated, taking it very close to the lunar north pole and very high above the lunar south pole.

NASA’s CAPSTONE: Flying a New Path to the Moon – YouTube

The advantage of this flight path is that going ‘Earth to Gateway’ then ‘Gateway to Moon’ uses less fuel than the ‘direct to Moon’ flights that the Apollo missions used, as well as allowing constant communication between Earth and spacecraft, unlike the Apollo missions which were occasionally out of contact when their spacecraft were on the far side of the moon. It also requires less fuel to keep a spacecraft on this elongated orbit than it takes to maintain a low altitude orbit closer to the Moon. That’s the theory, CAPSTONE will test this.

CAPSTONE will also test whether it can navigate without communicating directly with Earth. That’s what the CAPS stands for. While one system on board will communicate directly with Earth to determine the spacecraft’s location, another system will communicate with the Lunar Reconnaissance Orbiter – a NASA observatory spacecraft already orbiting the Moon – to try and determine its position from there. Comparing the two results will allow scientists to determine whether spacecraft navigation can be performed without direct communication to Earth.

This is significant because spacecraft navigation from Earth is a tedious process. If navigation can be handled separately then the limited amount of time each day for direct communication between spacecraft and Earth can be prioritised to send science data and observations rather than routine navigation updates. This is why experimental missions like CAPSTONE happen, because there’s only one way to find out: by trying it. 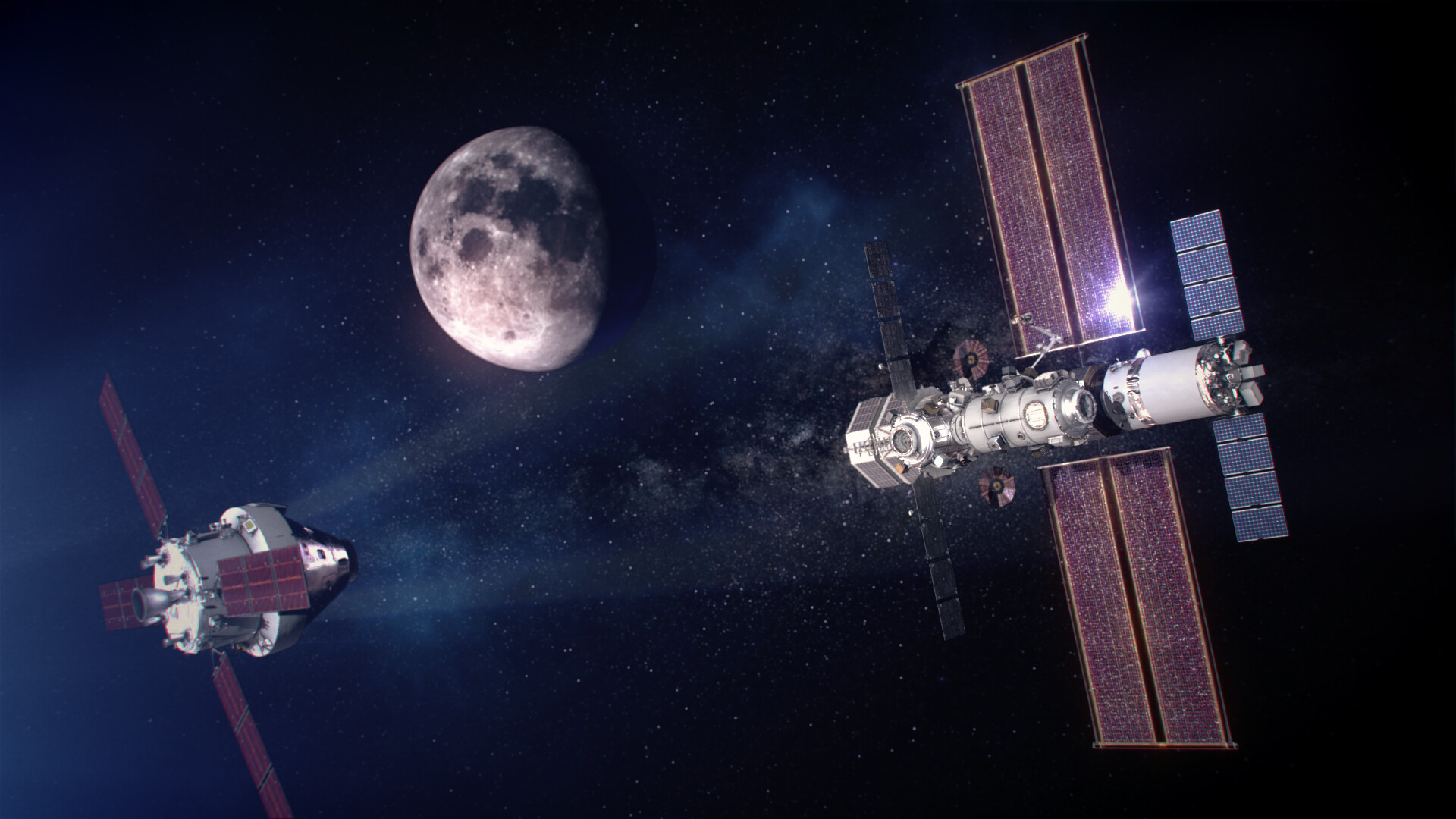 The first science images from the Webb telescope will be released to the public on July 12th.

On July 23rd the China National Space Administration intends to launch the Wentian Laboratory Module to the Tiangong Space Station. This is the second major component of China’s under-construction orbital laboratory.

The Federal Aviation Authority has completed its long awaited Programmatic Environmental Assessment for the SpaceX Starship, finding that there would be no significant impact from launches of Starship. This clears the way for SpaceX to attempt orbital flights from Starbase later this year. Elon Musk optimistically states that Starship will launch its first test flight in July.

The Milky Way continues to be the 200 billion strong star(s) of the show in the evening sky, stretching from east to west …