Near the end of June is one of the major turning points in our celestial calendar – the Winter Solstice for the Southern Hemisphere. This occurs on June 21st in 2018. On this morning the sun with rise at the furthest point north for the year and after this date the days will start getting longer again.

The earliest sunsets for the year occur in the early June, but the latest sunsets don’t happen until the Earth reaches aphelion (the furthest point in the Earth’s orbit from the Sun) about month later in early July. There isn’t one particular evening it happens on, but see if you can notice the evenings getting lighter by the end of the month.

The 4th Asteroid Day is being held again on 30th June. It’s also the 110th anniversary of the Tunguska event this year. It’s a day to raise your awareness about asteroids in general, not just about the hazards they pose to Earth. Think of it as an opportunity for you to learn what won’t happen! The official site is at asteroidday.org

Recently a new website collating research into Australian Indigenous Astronomy was launched. It brings together knowledge published by astrophysicists and other researchers working alongside Elders bringing new insights to how the indigenous people saw the sky. It’s a comprehensive site, so set aside a bit of time to explore the papers, talks and places you can visit to learn about this part of our culture.

The bright light of Venus dominates the northwest horizon at evening twilight now. It may seem long way north, but that is where the Sun is setting, too, now. The new Moon will join it to make a pretty sight on the 16th.The next brightest light, Jupiter, is high in the east as it gets dark. It spends most of the month next to the brightest star in Libra, Zubenelgenubi. If you look up at the Moon on the 23rd and wonder what the bright “star” is next to it, that will be Jupiter!

Saturn is now also rising as it gets dark, as it reaches opposition at the end of the month on the 27th. The rings are still wide open and easy to see, and as well as Titan, its largest moon, you should be able to see up to five other moons near its rings if you are using a telescope. They will look like faint stars, and will change position from night to night. The Moon will be below Saturn on the 28th.

Mars is also approaching opposition at the end of July, and if you are observing it regularly you may notice it getting both bigger and brighter in the sky as well. Mars only reaches opposition once every 2 years, and this year will be the best it’s been since 2003. More about that next month, but for now watch as it dips into the top of Capricorn and starts its loop of retrograde motion at the end of June. The Moon passes by it twice during June, once on the 3rd and again on the 30th.

Mercury will be missing from the sky for most of June. The keen of eye may spot it right at the end of month in the evening sky below Venus, but it may be better to wait until July, when it will be easily visible most of the month above the evening twilight.

Libra is one of the twelve constellations of the Zodiac, found in between Virgo the Maiden and Scorpius the Scorpion. This constellation was first widely used by the Romans in the first century BC, but it could date to an earlier time than this. Libra came to mark the place where the September equinox occurs amongst the stars (where the sun crosses the celestial equator from North to South). It represents the balance of equal day and night that occurs at the equinox. To the Romans it was connected to Virgo, who they saw as Astraea, goddess of justice, often drawn holding the scales aloft while blindfolded.

The ancient Greeks didn’t see this area of sky as the Scales, though – they saw these stars as the claws of the Scorpion. That is why Alpha Librae is called Zubenelgenubi, ‘the southern claw’ and Beta Librae is Zubeneschamali, ‘the northern claw.’ The ancient form of Scorpius was one huge creature with these claws attached. In 2016 gamma Librae was given the official proper name of Zubenelhakrabi which means “claws of the scorpion”

Jupiter will be near Zubenelgenubi during June 2018, outshining the stars in the constellation. This may help you locate Libra in the sky. 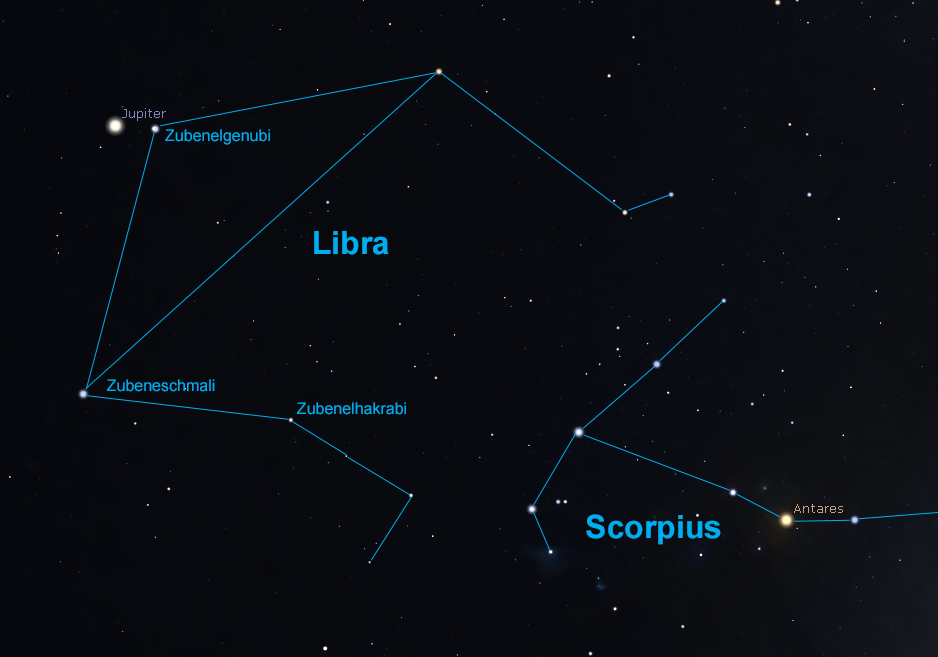 The constellation of Libra. Jupiter will be near it’s brightest star in June 2018, and Scorpius is to the southeast of it.

Vesta is the brightest and 2nd-largest asteroid in the main asteroid belt, but it was the 4th asteroid to be found. It is named after the Roman goddess of the home and hearth.

We know it was involved in a violent collision between one to two billion years in the past, as we find bits of it as meteorites here on Earth from time to time! We also have the wonderful pictures from the Dawn spacecraft that spent a year orbiting it from 2011 to 2012 before it headed off to Ceres. 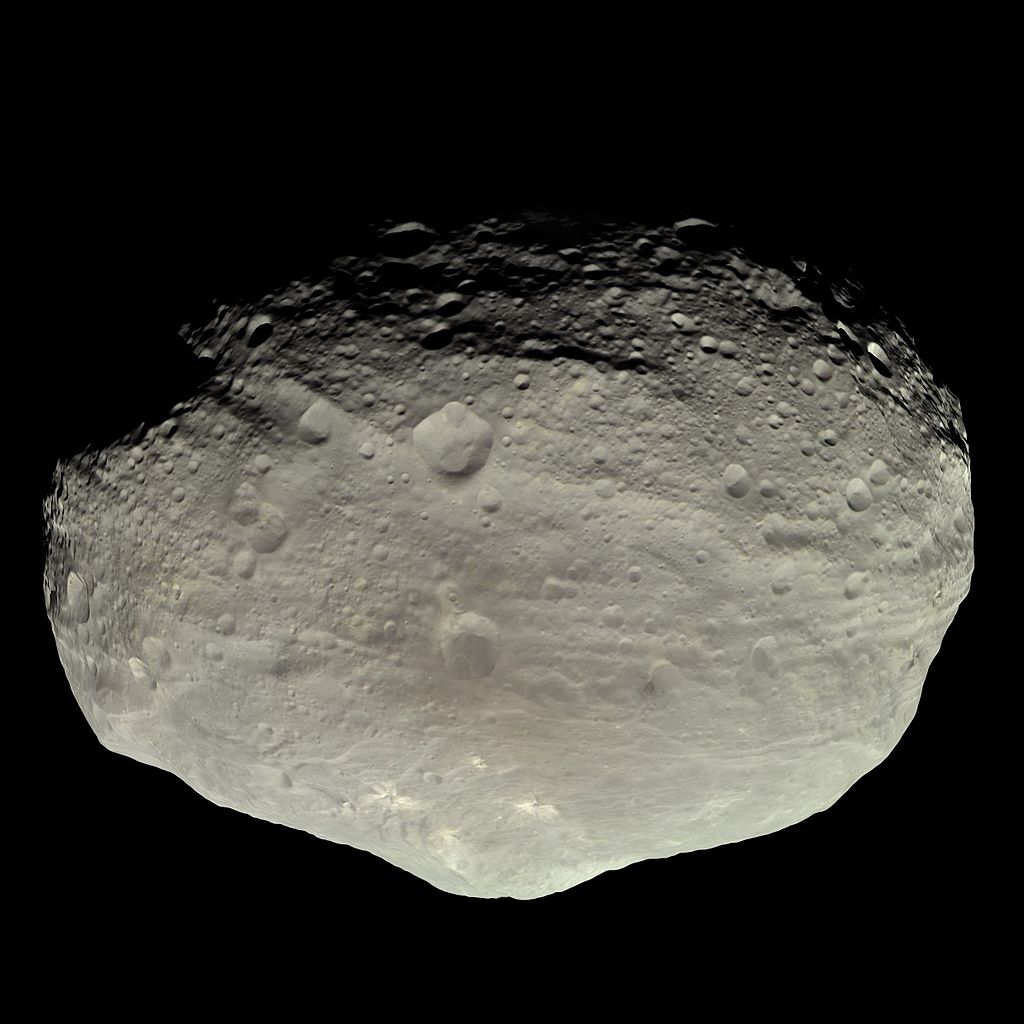 Every 11 years we get a good chance to see Vesta with the unaided eye here on Earth, or least it will bright enough to an easy target in small telescopes. This time it’s also near Saturn in the sky, in Sagittarius, to help you find your way over to it. The chart below shows its path through the sky during June 2018.

There are a lot of other stars in this part of the sky, so the best way to be sure you are looking at Vesta is to observe over several nights, making a sketch of the area each time. The “star” that has moved should be Vesta. Binoculars will be more than enough for this task, so you don’t need a telescope for this object, as it relatively bright. If you live in a really dark location and you let your eyes become adapted to the dark, which takes at least 20 minutes, you may even catch a glimpse of it with your unaided eye, as it will be around magnitude 5.3 during June. Faint, but achievable for those with good eyes! 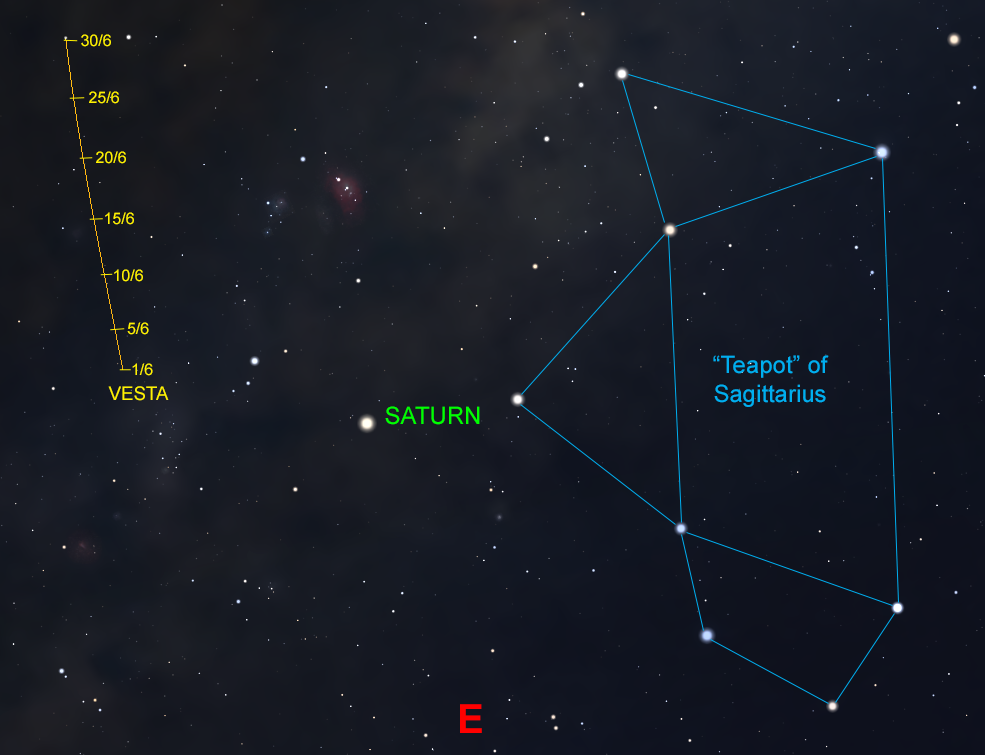 Where to Vesta during June 2018. It’s not far from Saturn, and the Teapot asterism of Sagittarius.

Falcon2 Arrives at the Dragon Palace

One of the missions space watchers will have their eyes on during the next 18 months is the Japanese Hayabusa2 sample-return mission to asteroid 162173 Ryugu. Hayabusa means “peregrine falcon” in Japanese, and it is a follow on mission from earlier in the century when the first Hayabusa flew to asteroid 25143 Itokawa. There were problems with that mission, but it did come back with its return capsule containing a few grains of asteroid material. It was worth the wait! This time scientists are hoping to collect more material to study. 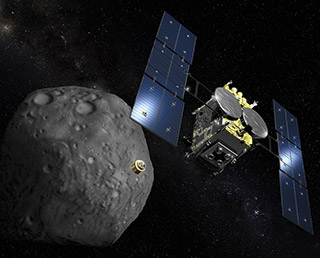 An artist’s impression of Hayabusa2 releasing the Minerva probe towards Ryugu.

The target asteroid, Ryugu, is named after a mythical Dragon Palace under the sea, from the story of “Urashima Taro.” The hero brings back a casket of treasure from the palace, which is what the scientists hope to do, too. Only their “treasure” will be asteroid regolith – the dust and dirt covering the asteroid.

Asteroid 162173 Ryugu belongs to the Apollo family of asteroids, an unusual group of asteroids that orbit between Earth and Venus and contains many bodies that pose a potential threat to Earth. Hayabusa2 will survey Ryugu until December 2019, and then it will take a year to return to Earth, in December 2020. During 2018, however, we can look forward to seeing what Ryugu looks like close-up!

The official JAXA site is here: http://global.jaxa.jp/projects/sat/hayabusa2/ Since this is a Japanese mission there may not be as much information in English as we’re used to with the NASA or ESA missions. But there is a nice one-page manga comic explaining a small glitch in the data they received earlier in the year. Keep watching for updates in the coming months on this mission!