Send your name to Mars on the Mars 2020 Rover! In recent years it has been a tradition to send a disc with peoples name on it along with spacecraft sent out into the solar system. Here is the latest chance for your name to go exploring. Go to NASA’s Send Your Name To Mars page and enter your details to get your boarding pass before September 30th.

Near the end of June is one of the major turning points in our celestial calendar – the Winter Solstice for the Southern Hemisphere. This occurs on June 22nd in 2019. On this morning the sun with rise at the furthest point north for the year and after this date the days will start getting longer again.

Asteroid Day is on 30th June. It’s a day to raise your awareness about asteroids in general, not just about the hazards they pose to Earth. Think of it as an opportunity for you to learn what won’t happen! The official site is at asteroidday.org

We are about to say good-bye to Mars as it leaves our evening skies at the end of June and spend three long months hidden in the Sun’s glare. There is little to see here with our telescopes at the moment, with it being so far away. All we can do is wait until it returns next year for the next opposition. But before it goes, it is joined by Mercury, which zips up out of the twilight for a close encounter with the red planet on the evening of the 18th of June when the two will only be 0.4 of a degree apart. That is less than the width of the Moon! While Mars is above Mercury up to this time, after the 18th Mercury will rise above Mars for a couple of weeks.

On the other side of the sky the giant planet Jupiter is hard to miss. It is shining at its brightest as it reaches opposition on the 11th of June – this means it is on the opposite side of the sky to the Sun, and also at its relative closest to us, if you can call 628 million km close. It is a good time to be observing its banded cloud patterns, the Great Red Spot and maybe even seeing the shadow of one of the Galilean satellites – Io, Europa, Ganymede and Callisto – moving slowly across its face. The Moon is just above Jupiter on the evening of the 16th June.

Saturn is not far below Jupiter, rising two hours later, but by the end of the month it is above the eastern horizon at the end of twilight. It is now below (eastwards) of the Teapot asterism of Sagittarius, next to what some people know as the Teaspoon. It reaches opposition in early July. 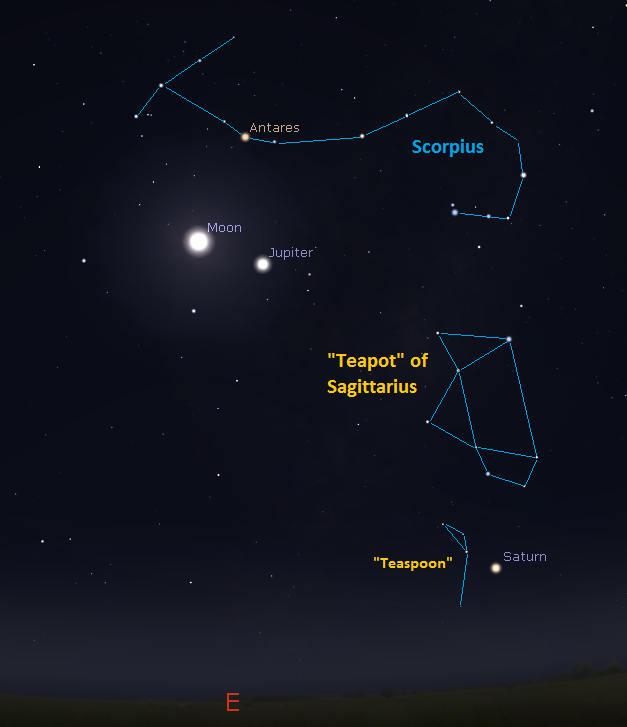 The evening sky on the 16th June, with the Moon near Jupiter and Saturn below the “Teapot” asterism of Sagittarius.

This is also the last month to catch Venus for a while, as it sinks down into the morning twilight for a long stint in the Sun’s glare as well. It will make a pretty picture with the Moon on the morning of the 2nd, and on the 16th it will line up with Aldebaran and the bottom of the Hyades in Taurus.

Centaurus is one of the largest constellations in the sky and can be found striding over the Crux high in the south as he stabs a spear into the heart of Lupus the Wolf.  He was once even bigger – the stars we know as Crux the Southern Cross today were once a part of his legs. Centaurus is also one of two centaurs in the sky, the other being Sagittarius. The southern centaur is said to represent Chiron, a wise and famous figure in Greek mythology, skilled in the arts of healing and music and tutor to the hero Hercules.  It was said that it was Chiron who invented the first constellations in the sky, hence his honoured place among them.

The two stars known as the Pointers, alpha and beta Centauri, represent the front hooves of the centaur.  Alpha Centauri, also known as Rigil Kent (short for Rigil Kentaurus, which means ‘the knee of the centaur), is a well-known triple star and the closest star to our solar system, lying only 4.3 light years away – that’s around 40 trillion kilometres. The two brighter components are still an easy double at the moment, even though the apparent distance between them is slowly shrinking.  They have a known period of 80 years.

Proxima Centauri, technically the closest star to our solar system, is a faint red dwarf about two degrees to the south of the main stars. And it is faint! You will need a good chart and a decent sized telescope to spot our nearest stellar neighbour. 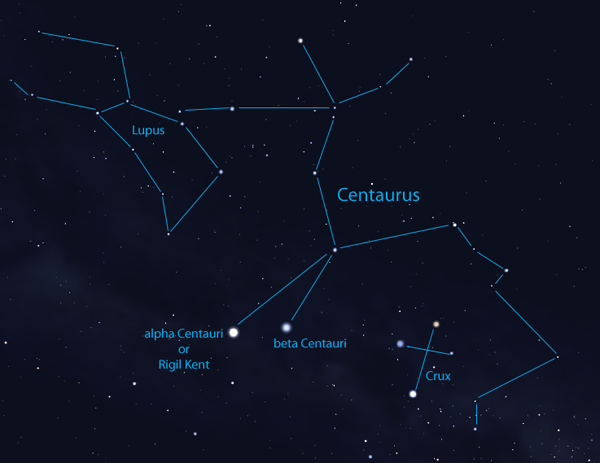 Omega Centauri is considered to be the largest globular cluster in the sky. However there is evidence that this might be a misclassification, and that cluster is actually the stripped down core of another galaxy consumed by the Milky Way. Whatever it is, it is an impressive sight in any telescope, with over million stars packed into the cluster. Even the naked eye, to which it appears as a fuzzy star, can tell that it’s something out of the ordinary. Don’t confuse it with a comet, which is what a lot of inexperienced observers did in 1986 when looking for Comet Halley as it flew through the area. Use beta and epsilon Centauri to help point you in the right direction: Draw a line between the two then extend it out that distance again to find omega. 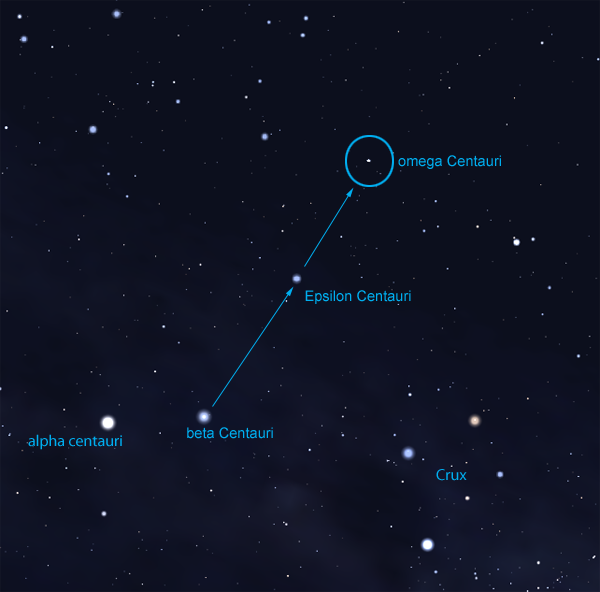 Omega Centauri can be found by drawing a line from beta to epsilon Centauri and then on in the same direction for the same distance again.

July will be a busy month this year so we will mention this significant anniversary a little early to avoid the rush. The International Astronomical Union, the IAU, turns 100 on the 28th July, but as with most big organisations they have been celebrating all year, anyway.

The IAU is a body of over 13,500 professional astronomers (who have a PhD or above) from 100 countries around the world today who are the recognised authority for assigning names and other designations to celestial bodies and their features. For example, they recently named five new places on the Moon where the Chinese Chang’E-4 lunar rover landed, including the landing site, three nearby craters and the peak in the middle of the main crater. While some things are straight forward to decide, such as the naming of asteroids, others are more controversial, such as deciding what is the difference between a planet and a dwarf planet. It looks as if that debate isn’t quite over yet.

You can find out more about the IAU from their website, including about naming of objects at www.iau.org

The logo of the International Astronomical Union. Credit