Near the end of June is one of the major turning points in our celestial calendar – the Winter Solstice for the Southern Hemisphere. This occurs on June 21st in 2020. On this morning, the sun with rise at the furthest point north for the year and after this date the days will start getting longer again.

Asteroid Day is on 30th June. It’s a day to raise your awareness about asteroids in general, not just about the hazards they pose to Earth. Think of it as an opportunity for you to learn what won’t happen! The official site is at asteroidday.org.

The second eclipse season for 2020 occurs in June (we have three this year) and consists of an Annular solar eclipse at New Moon on the solstice, bracketed by two partial Penumbral lunar eclipses at the Full Moons before and after that. An Annular solar eclipse is when the Moon is too far away from the Earth to block out the Sun entirely and a ring, or annulus, of the Sun, still shines around the Moon. Australia will get to see the leading Penumbral eclipse on the morning of the 6th June, as the Full Moon sets, but will miss out all together on the second Penumbral lunar eclipse on the 5th July. As for the solar eclipse on 21st June, only the extreme Top End of Australia will see anything of this event, with Darwin experiencing a 5% eclipsed Sun only 30 minutes before sunset, and people on the top of the Cape York Peninsula might notice 11% of the Sun is missing as it hits the horizon. Easy info and some fun demonstrations at www.timeanddate.com and for more technical information go to www.eclipsewise.com  There will more information about the June 6th Penumbral lunar eclipse below. 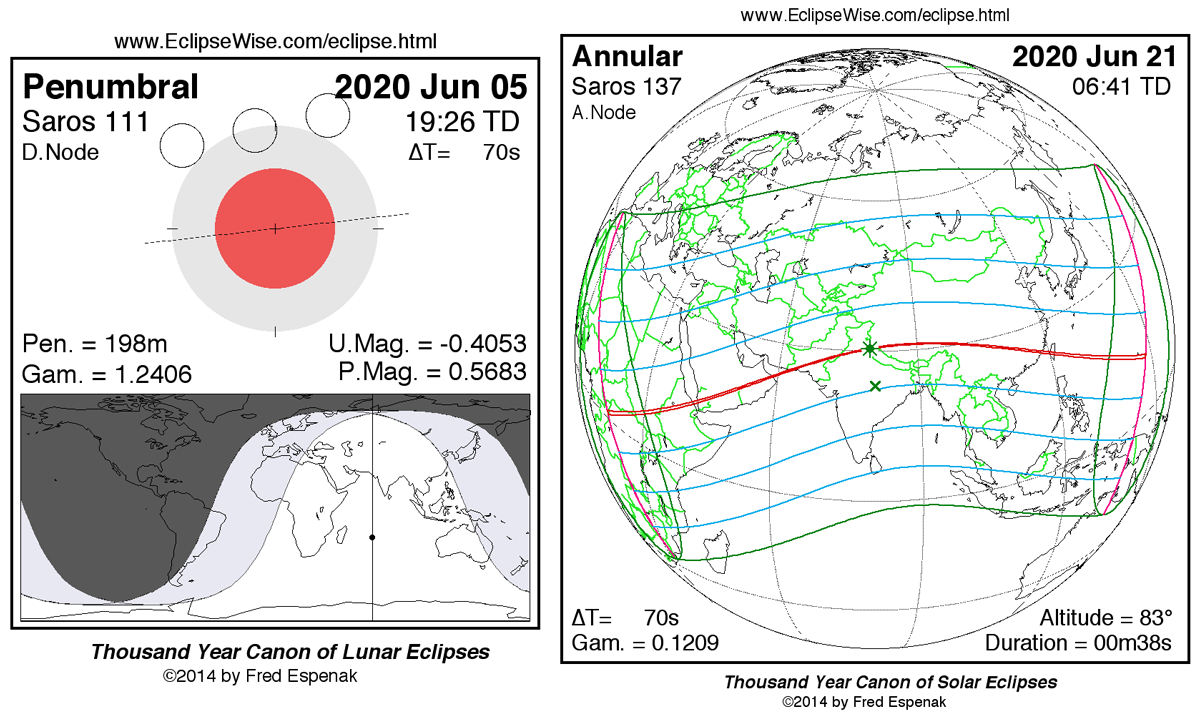 Venus has gone from the evening sky and we now have Mercury briefly in its place on the northwest horizon for the first half of June. Don’t confuse it with the bright stars Castor and Pollux in Gemini the Twins. The day after the solstice the returning slender crescent Moon appears below Mercury low in the evening sky during twilight, which might make it difficult to catch unless you have a low, clear horizon.

On the other side of the sky Jupiter and Saturn are now rising early evening, and by the end of June they will be rising just after sunset! That’s good news for everyone who has been hanging out for some views of the gas giants. They reach opposition next month, so they are coming up to the best time of the year to be observing them. Jupiter is the brighter of the pair, rising first, with a slighter less bright Saturn following. They are in between the stars of Sagittarius and Capricorn at the moment, so if you aren’t sure, the Moon will above them on the 8th of June, and below them the next night, the 9th.

Mars has continued to pull away eastwards from Jupiter and Saturn, and is now on its own in Aquarius. Aquarius isn’t the easiest of the Zodiac to find, but you should be able to see Mars below the Moon on the morning of the 13th. Neptune is also in the part of the sky, but you need a telescope to see it. The two planets will be 1.6 degrees apart on the 14th June.

Venus has gone from the evening horizon, but it has reappeared in the morning sky! It will be visible here for the early risers for the rest of 2020. As dawn starts on the morning of the 13th it will be in line with ends of the “V” shape of the Hyades that makes up the face of Taurus, making the Bull look like it has a second eye to the left of orange-coloured Aldebaran. Photographers might also like to be out again on the morning of the 19th, when the waning Moon enters the scene with a slender crescent hanging above Venus then the Hyades to the lower right. 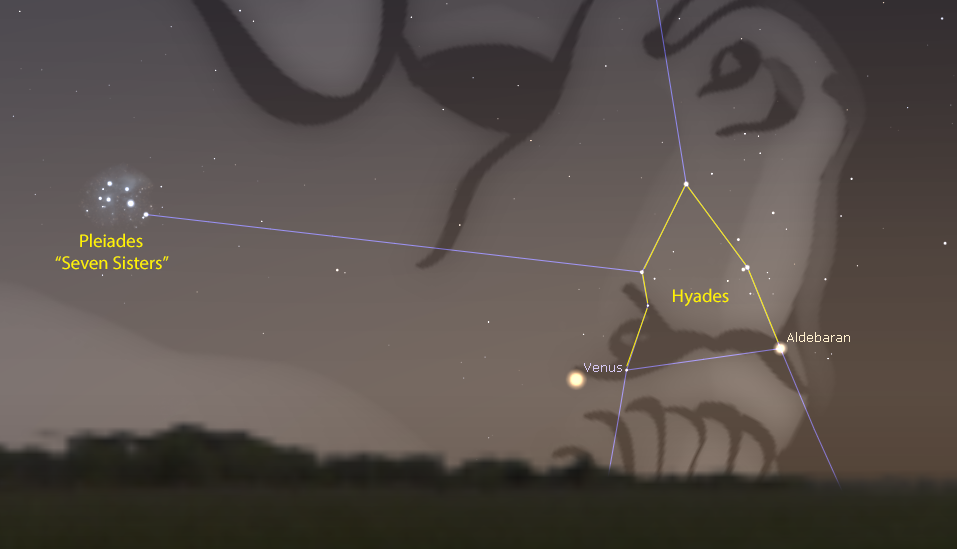 Venus and the Hyades on the morning of the 13th June, looking east-northeast, just as morning twilight starts. You might even spot the Pleiades further to the left (north.)

Coma Berenices is the only constellation named after a person in history that has survived. Many attempts have been made to honour European kings in the last 2000 years, but those attempts, often small features sandwiched in between more well-known patterns, didn’t last (although some relics of their existence still exist if you know where to look.) Coma means “hair,” so the name means “The Hair of Berenice.” While it is an ancient story its popularity in the sky can be attributed to Tycho Brahe. Before that, the stars that make up the constellation may have been imagined as a bunch of grapes, as the nearest bright star is Vindemiatrix, in neighbouring Virgo, which means “The grape gatherer.”

Berenice was queen to Ptolemy III of Egypt around the time of 246 to 221 BC. Devoted to her husband, the king, she pledged her long tresses of hair to the goddess of Love, Venus, if he returned home safely from war with the Assyrians. This happened, and she cut her hair and gave it to the temple as she had pledged. King Ptolemy was angered by this and went to the temple to retrieve the hair but it had gone. To placate him a priest told him he had only to look into the sky to see his wife’s hair honoured by Venus herself. 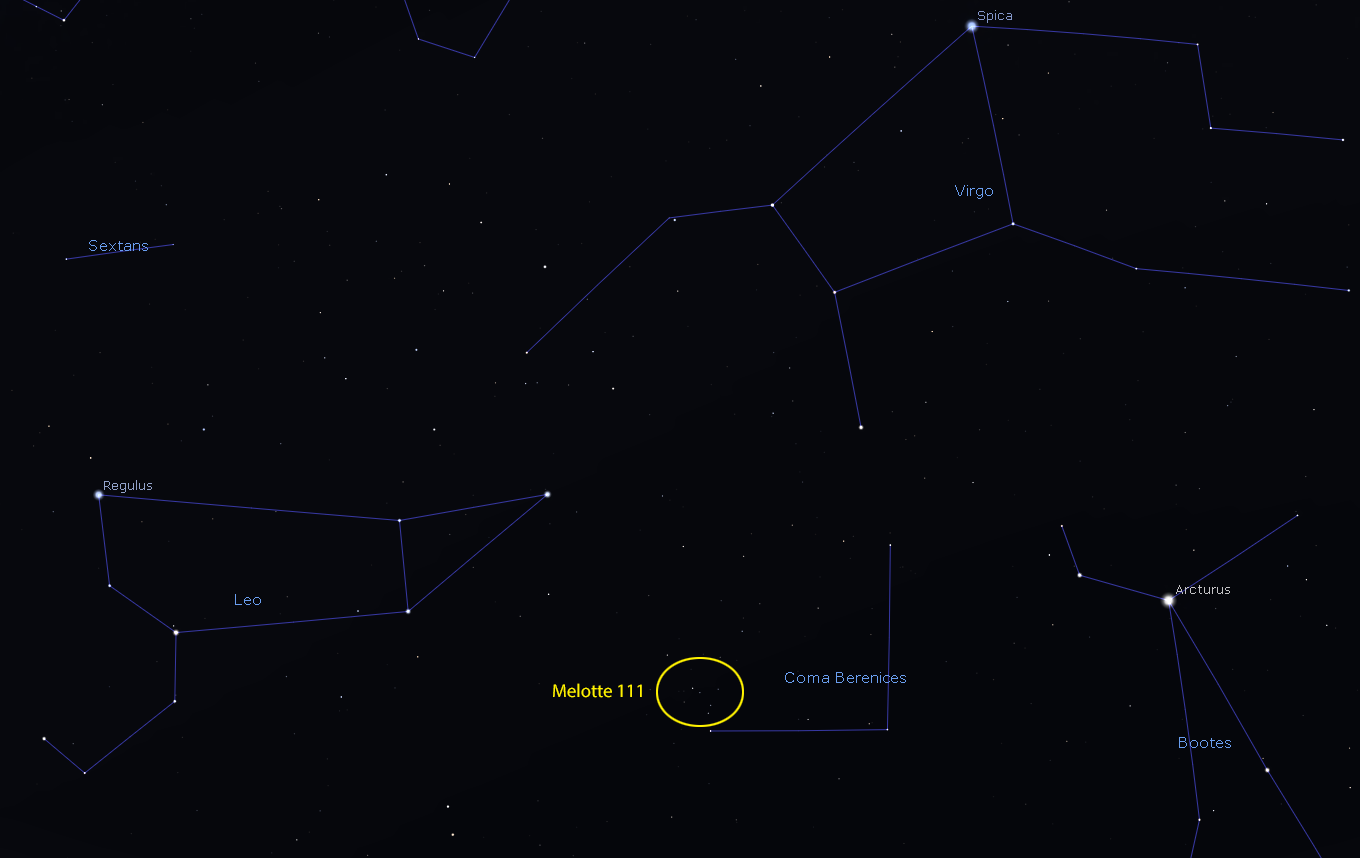 While there are no bright stars to make Coma Berenices stand out in an urban environment, on a dark, moonless night one can see the large open cluster of stars that marks the hair of the queen. Known only by a catalogue number Melotte 111, this unremarkable patch of sky is actually the third closest star cluster to our solar system (250 lightyears away) after the Big Dipper in Ursa Major (80 ly) and the Hyades in Taurus (153 ly). It will stand out more clearly if you use “averted vision,” that is, by not looking at the cluster directly, but out of the corner of your eye, which uses the rods around the edge of your retina rather than the cones in the middle. The rods don’t see colour very well, but they are very good at detecting the level of light reaching your eye. This is a well-known astronomers trick when out observing faint objects.

Coma Berenices is also famous for its many galaxies, but you will definitely need a telescope to enjoy any of them. The galaxies here are part of a huge stream of galaxies stretching from Virgo to Coma Berenices and Leo and then all the way down into Ursa Major in the north. The Coma Berenices Super Cluster of galaxies has at least 1000 galaxies all in the same region of space. 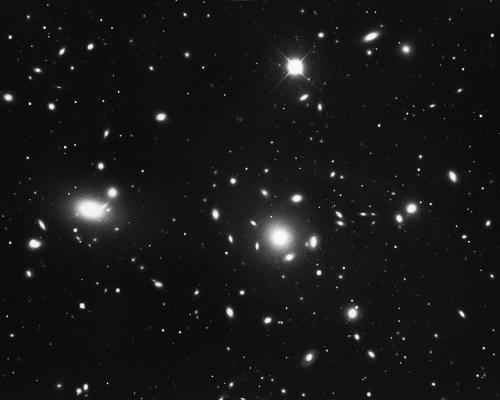 All the fuzzy blobs in this image are galaxies in the Coma Berenices Super Cluster.

Most galaxies we look at are a somewhat tilted as we see them, but this one just happens to be almost perfectly on edge, making the dust lane look like straight line stretching from one side to the other. It also makes the central bulge stand out either side of the disc. The Milky Way has a central bulge as well – you can see it pushing up and out into Scorpius above the plane of the Milky Way in winter if you are in a nice dark observing site and can see the dark dust lanes along the Milky Way as well. 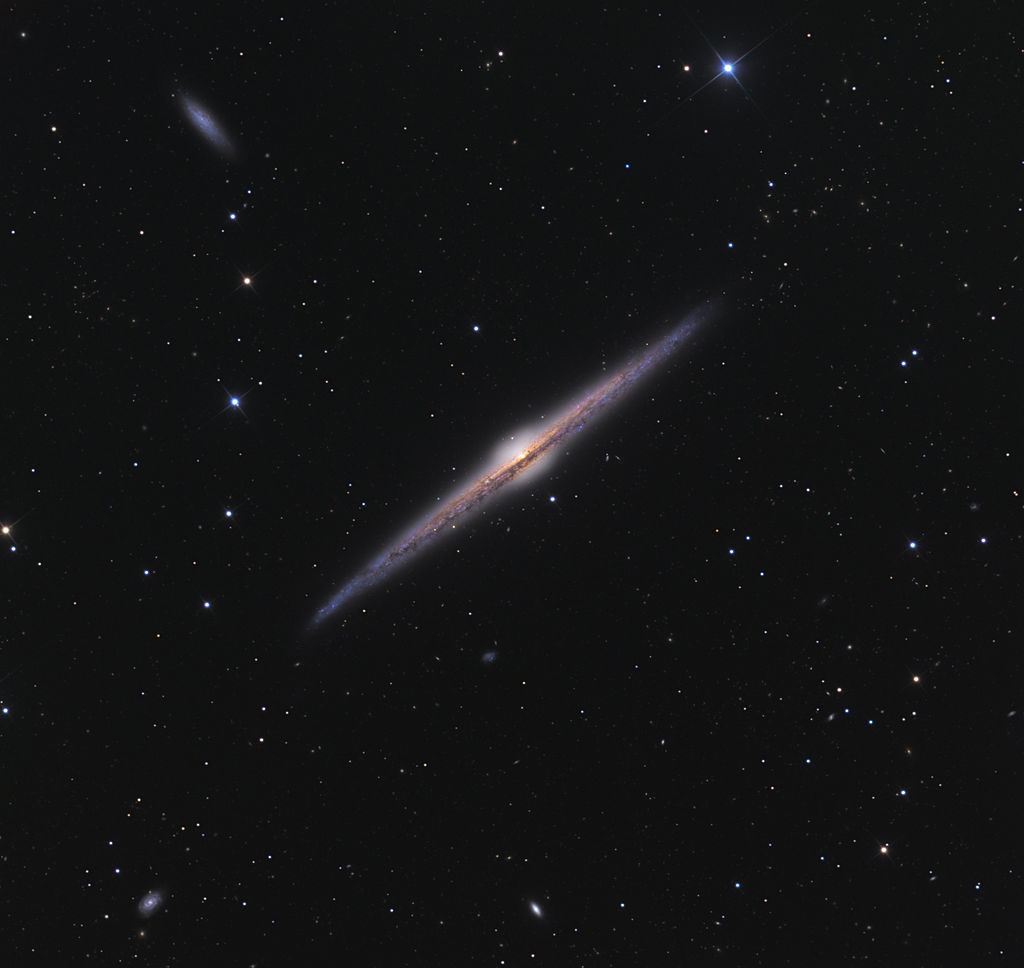 The Spindle Galaxy showing the dark dust lane cutting the central bulge in half. 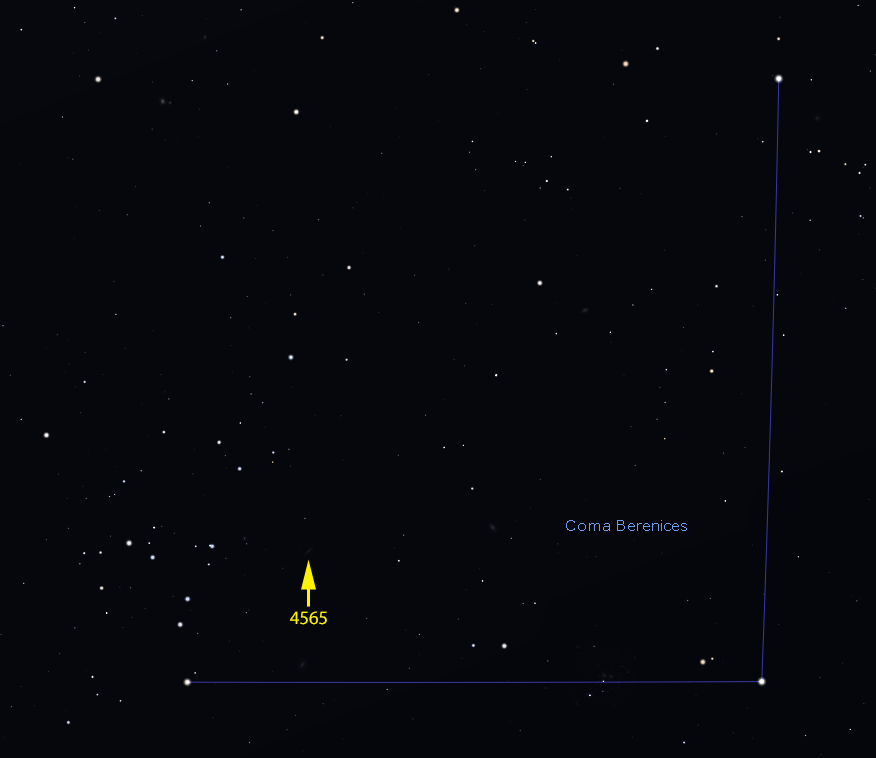 Where to find the Spindle Galaxy (NGC 4565) in Coma Berenices.

There are no Total lunar eclipses this year – we have to wait until May 2021 to see one again – but this year we get to see several Penumbral lunar eclipses, where the Moon just dips into the partial shadow of the Earth. In this zone, only part of the Sun is hidden by the Earth. Umbra means “shadow”, so the penumbra is “almost shadow.” (You carry a “little shadow” when you open an umbrella above your head.)

For Perth (and Western Australia) this lunar eclipse will occur during the morning hours of 6th June. The whole event will last over three hours, but that is likely going to seem a long time on a cold winter’s night. If you are keen to see it, the best thing to is set the alarm for the time of mid-eclipse, which for Perth will be at 3.25am. Once you have made it outside, look to the west, where the Moon is going down, and you should see that the left had side of the Moon looks darker. This is the side that will be closest to the umbra, the full shadow of the Earth. The right-hand side will be out of the penumbra, and in full sun, so shouldn’t look any different.

There is another penumbral lunar eclipse on the 5th July, but Australia misses out on that one, but we do get to see the one after that on November 30th, when the Moon will rise over WA as the eclipse is finishing. It doesn’t always work out for us, unfortunately – but we do have next year to look forward to.

For more information you can go to timeanddate.com/eclipse/  or for more technical information have a look at eclipsewise.com 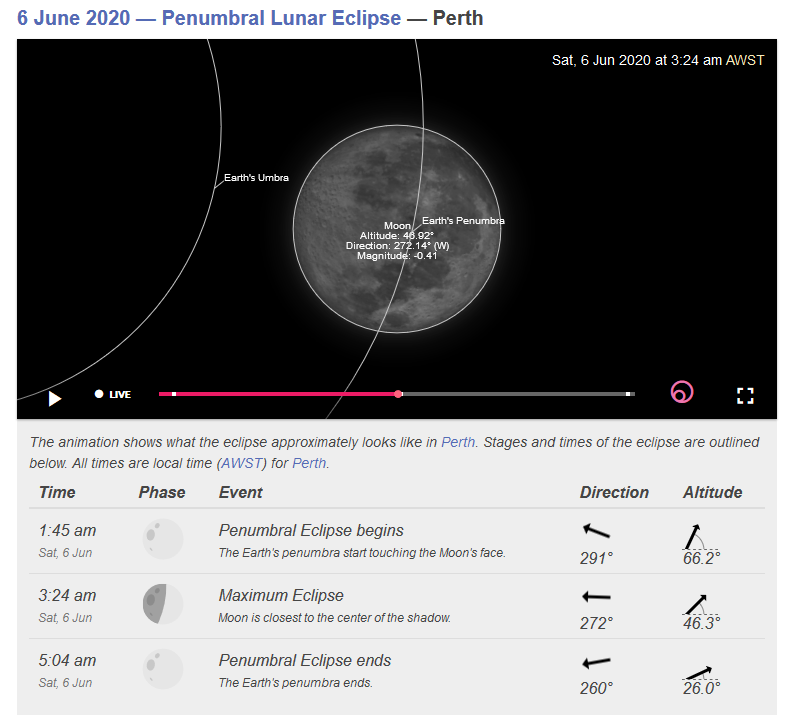 If you really want to watch to whole event from start to finish, or take a photographic sequence, the critical times are given in the graphic above.