The autumnal equinox for the southern hemisphere occurs on Wed 21st of March in 2018. After this day the nights become longer than the days.

March sees two full moons again, with a Full Moon on the 1st and the 31st of March. This also makes Easter early this year, on the 1st of April, as it is the first Sunday after the Full Moon after the equinox. Easter Sunday on April Fools Day, hmmm? Perhaps you’d better check your Easter eggs before you bite into them…

Astrofest is on again in 2018 and will be held on Saturday March 24th at the Curtin Stadium at Curtin University. There will be talks, stalls to browse, a photo competition to admire and telescopes to look through outside and if you pre-register you can be in the running for some great prizes. And it’s all free! Details at www.astronomywa.net.au/astrofest.html

The planets return the evening sky this month – at last! It has been an unusually long time without evening planets but it is still going to be a little bit of work and some waiting to get them.

First up, Venus and Mercury appear out of the evening twilight together during the first week and half of March. To see them is going to require a clear, low western horizon, as the best view you will get will only be 25 minutes after sunset. After mid-month, Venus will slowly continue upward into the evening sky, but Mercury will dive back into the Sun’s glare for a better appearance in the April sky.

Jupiter rises next, about 10pm at the beginning of March, but by month’s end it will be rising near 8pm. It is stationary on 9th, as it begins its annual phase of retrograde motion leading up to its opposition in early May.

Next in line is Mars, zooming along the ecliptic towards Saturn. It starts March half way between Antares, the bright orange star in the heart of Scorpius the Scorpion, and Saturn, but by month’s end it is right next to Saturn where it will pass by the ringed planet in the first few days of April. So if you see an out-of-place bright orange-red star between Scorpius and Sagittarius, that’s probably what you’re looking at.

Mars will probably seem to be moving all that much faster, because Saturn won’t be moving far at all. It will hover near the top of the Teapot asterism of Sagittarius, looking like a bright yellow star, waiting for Mars to catch up to it. It rises about 1am at the start of March but by the end of the month Mars and Saturn are rising at 11pm.

So now all the planets are in the evening sky, and none are in the morning sky! That will change in April, when Mercury swings back, but the early risers will just have to look west to see the planets setting rather than rising this month.

In ancient times there was a huge constellation known as Argo Navis, which represented the Greek ship Argo, made famous from the Greek myth of Jason and the Argonauts who went to fetch the Golden Fleece. To make things a little easier a French astronomer called Nicolas-Louis de Lacaille split the ancient constellation into four smaller ones: Carina the Keel, Vela the Sails, Puppis the Stern and Pyxis the Compass. (Actually, there was an attempt to make one part Malus the Mast but it wasn’t very popular and soon forgotten.)  At this time of year (southern hemisphere autumn) Vela can be found high in the south as it rotates above the South Celestial Pole.

Two stars in Vela make up one half of what is known as the False Cross (see the map below). People unfamiliar with the night sky often confuse this with the Southern Cross. To help tell the two apart there are a number of features to look for: The Southern Cross has a more symmetric shape (the False Cross looks a bit lop-sided), a sequence of bright to faint stars as you move around the outside (The False Cross stars are all roughly the same brightness) and the Pointers, alpha and beta Centauri, point the way to the right place! (The False Cross has no pointer stars) 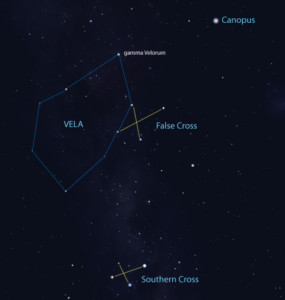 Map of the False Cross

If you are in a dark location and have keen eyes you may notice a small cluster of stars surrounding the star theta Carinae. Usually referred to by its common catalogue number of IC 2602, Australians have taken to calling it the Southern Pleiades. A few people also refer to it as the “Five of Diamonds” – can you see why?

This area of the sky has the star clouds of the Milky Way running through it and a quick sweep of the area with binoculars will reveal many other clusters, large and small, nearby.

This cluster lies about 500 light years away. 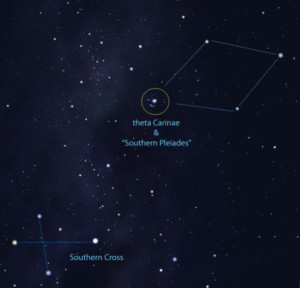 On the 21st of January this year a company called Rocket Lab from New Zealand revealed they had released a one metre wide highly reflective carbon fibre geodesic sphere as one of the payloads in their first rocket. Called the Humanity Star, the CEO and founder of Rocket Lab, Peter Beck, hopes that it will inspire you to “feel a connection to the more than seven billion other people on this planet.”

But it raised a wave of angry protest from astronomers world-wide, who saw it as an act of thoughtless, irresponsible light pollution. They already have enough trouble with regular satellites disrupting their data collection that the thought of a bright “disco ball” flashing through their images was too much to bear (it’s similar to someone playing loud music while you are trying to sleep.) Other arguments against it were that there was already the International Space Station in orbit inspiring people to work together, wasn’t that enough? And hey, it hasn’t really brought us together even though it’s been circling for 18 years now so why would a little flashy ball do it? Others said “What a great idea, I’m looking forward to seeing it!” and some said “Space is free for every one!” About the only thing that could be agreed on is that passions were running pretty high over the subject.

The Humanity Star is only designed to stay in orbit for nine months, so it will re-enter and burn up in the Earth’s atmosphere before the end of the year. In the sky it is acting like a tumbling satellite – that is, it is not a constant, star-like light, but is a series of bright-dim-bright flashes as it drifts across the sky. The brightest flash is about magnitude 1.6, so around the same brightness as Mimosa (beta Crucis), the second brightest star in the Southern Cross. If you are used to taking photographs of the night sky, you will find it easy to image.

For further reading about the Humanity Star go to www.thehumanitystar.com

If you are hoping to see it in the sky try Heavens-Above for times, and don’t forget to click through on the blue-highlighted date to see a map of the sky at the time of its expected pass. It takes about 92 minutes to complete one orbit so it is possible to see it twice in one night.