The 10th Perth Astrofest will be held on Saturday 16th March at the Curtin Stadium. Starting at 5.30pm there will be telescopes, knowledgeable people to talk to, activities and astrophotos on display. For more information go to their Facebook page Astrofest Perth 2019.

The autumnal equinox for the southern hemisphere occurs on Thursday 21st of March in 2018. After this day the nights become longer than the days. It’s also the day of full moon, so Easter is not until after the next full moon on April 19th, which is why it is rather late this year.

Mars is lingering in the west now, but you might not notice it as it has faded so much from last year when it was bright and close. The crescent Moon will be to the left of it on the evening of the 11th March if you would like to locate it, but don’t expect to see much in a telescope. It is on the far side of the Sun from us now, and will be so for most of this year.

Jupiter starts to return to the evening side of midnight this month, but it’s still for those who like to stay up late (or get up early.) By April it is rising by 10pm, so it’s getting closer to being an evening object. The Moon was next to it on February 28th, and will be above it next on March 27th.

Saturn is not far behind Jupiter (although it’s really Jupiter catching up with Saturn) but it’s still a morning planet during March. The Moon will be very close to it on the 2nd of March but later in the month the Moon ends up some distance above it on the 29th. The Moon and Saturn will be seeing a lot of each other this year, but more about that in the months to come.

Lastly, Mercury is too close to the Sun to be seen during the first half of the month, but will return to the morning sky for the last week of March. It will remain here until the end of April, so if you would like to catch it this will be one your best chances for the year.

Carina is the southernmost part of what was known as Argo Navis, the Ship of the Argonauts. Argo Navis was simply huge, so it was split into four smaller constellations, the other ones being Vela the Sails, Puppis the Stern and Pyxis the Compass. Carina stretches across one of the brightest parts of the southern Milky Way it contains some of the most stunning and interesting sights in the sky.

Canopus, alpha Carinae, is the second brightest star in the sky. Canopus was named after a person, the navigator for Menelaus, the king who led the Greeks into the Trojan War. The star itself has long been used for navigational purposes, roughly marking south. Even today it is still used by space craft and astronauts to navigate through space, as it is always visible below the plane of the solar system and so never goes behind the sun. In the old constellation of Argo Navis Canopus marked the rudder of the ship, a very appropriate position for the Navigator’s star.

Two stars of Carina make up half of what is known as the “False Cross.” Sometimes people get this cross of stars mixed up with Crux, the Southern Cross. It’s fairly easy to tell them apart – Crux is brighter, more symmetrical and has the two Pointer stars to the left. The False Cross is fainter, a bit wonky and with no bright pointers to guide you to it.

Before you reach for the binoculars or telescope to check out the objects in this area, just stand back and take in the view of the Milky Way star clouds running through Carina, up from the Southern Cross. They seem bright in Carina, but fade away as you follow the band of the Milky Way around to Orion. As you look towards Orion you are actually looking out of the Milky Way (as opposed to looking in towards the centre of our galaxy as you look at Scorpius and Sagittarius). Where Carina is located we are looking through a bend in one of the spiral arms, a bit like looking through the back of somebody’s elbow, so we are in effect getting a doubling up of the star clouds!  This makes it a region rich in star clusters and nebulae and a great place to spend some time exploring wonders of the night sky.

At the top of the constellation Vela the Sails, almost on the border with Antlia the Air Pump, is a bright planetary nebula known as the Eight-Burst Nebula. Planetary nebulae have nothing to do with planets; they were given their name by William Herschel who thought they looked similar to the planet Uranus he had recently found, and many do look like small, round aqua-blue balls. They are shells of gas puffed off by dying low-mass red giant stars that is then illuminated by intense ultra-violet light as the dying star shrinks down into a white dwarf, and they can take on weird and wonderful shapes depending on what is happening near the dying star. They also don’t last very long, a mere 10,000 years at most – a blink of an eye in stellar terms – before the gas disperses into surrounding stellar region and the nebula fades away.

The Eight-Burst Nebula lies about 2000 light years away and will show up nicely in a 20cm (8”) telescope on a dark night. You might even see a star in the middle of it, but this isn’t the star that is lighting it up, that’s being done by a much smaller and fainter star that’s hiding behind this brighter star in the foreground. There’s a lot of power pouring out of a tiny package!

To find it, trace the shape of the sail around to the star labelled “q” in the maps below. From there you may have to star-hop up to the squashed oval shaped nebula. Or if you have a go-to telescope you could put NGC 3132 into your hand control paddle and let the computer do the work for you. 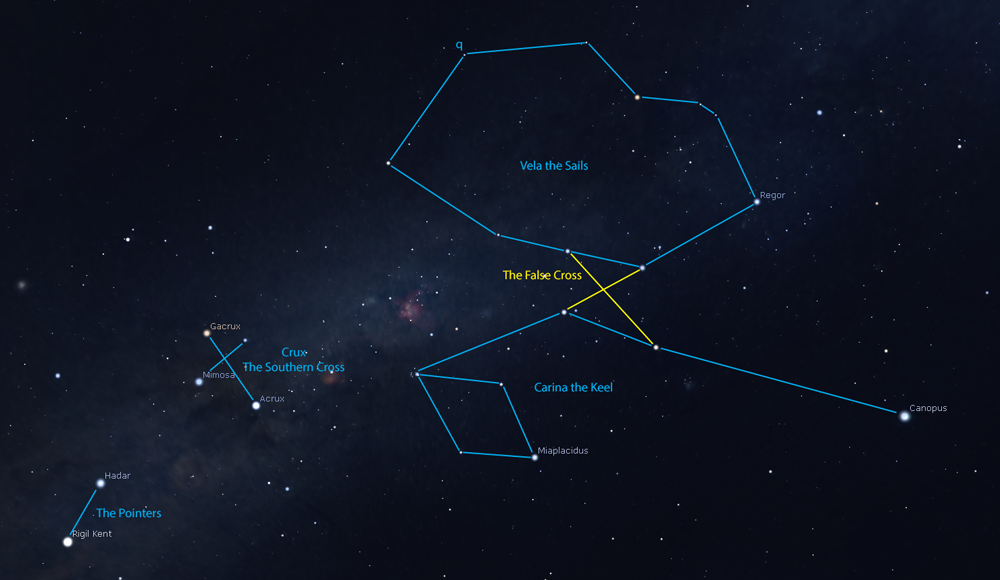 a) If you are finding the nebula manually, point to the star q Velorum at the top of Vela to start. 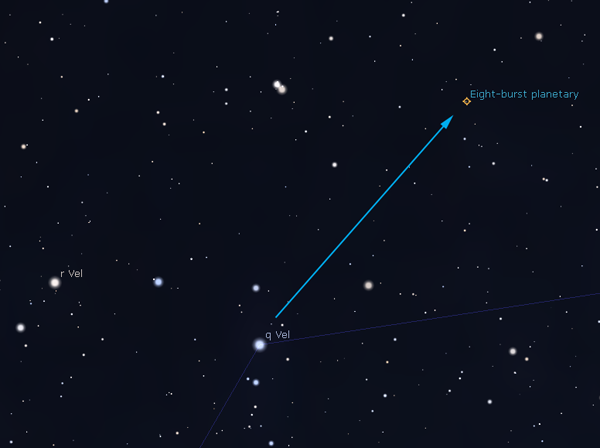 b) Once you have q Velorum in your telescope, head up to the right a bit further to find the 9th magnitude oval-shaped nebula. The size of the stars in the maps indicates their relative brightness’s.

International Year of the Periodic Table of Chemical Elements

2019 is a big year for anniversaries but let us start with one of the “International Years” as proclaimed by the United Nations. This year marks 150 years since the Russian chemist Dmitri Mendeleev came up with his idea of how to arrange the chemical elements in a table that showed their “periodic” nature in 1869. Even though not all the 92 naturally occurring elements had been discovered at this time, his arrangement allowed accurate predictions to be made about their properties. And while some chemists would like to re-arrange the periodic table, the form we use today is still very useful. The periodic table of elements. The numbers represent the number of protons in the nucleus of the element’s atom. Source: Wikimedia Commons

The elements are a fundamental part of astronomy, as it is the stars that make them.

Small stars like our Sun are making all of the smaller elements up to Iron (atomic No. 26) via nuclear fusion inside of them. But to make the heavier elements, like Gold (79), you need some serious pressure, such as occurs during a supernova, or, as discovered recently, the merger of two in-spiralling neutron stars.

Astronomers also have a curious usage with the periodic table, in that they consider the first two elements, Hydrogen(1) and Helium (2), to be gases, but all other elements are called “metals,” whether they are true metals or not. So while we usually think of Chlorine (17) and Neon (10) as gases, an astronomer would think of them in other ways.

So the next time you burn your toast (Carbon, 12), drink some water (Oxygen, 8, and Hydrogen) or wipe some blood from a scratch (Iron in the red blood cells) remind yourself that all those tiny bits came out of big stars.