2007 OR10 has finally got a proper name. Rather than having to remember a string of numbers for this significantly-sized Trans-Neptunian Object (TNO) that one day might be called a dwarf planet we can now refer to it as Gonggong and its moon as Xiangliu. It is named after an ancient Chinese water god that had coppery-red head and the body of a snake, and Xiangliu was its attendant minister which had nine heads on its snake-like body. Gonggong the TNO is estimated to be around 1230 km across, making it larger than Quaoar (1110km), Sedna (995km) and Orcus (910km), all of which orbit the Sun out beyond the orbit of Neptune.

Betelgeuse is brightening again! Last month we mentioned that Betelgeuse, in the constellation of Orion the Hunter, and a known variable star (a star that varies in brightness over time), had noticeably dropped in brightness over the New Year, and had reached its lowest recorded brightness in the last century. At the time of writing (late February) Betelgeuse is just starting to increase in brightness again. It is expected it will take several months to return to what is considered “normal” for this red giant star nearing the end of its life, and astronomers, professional and amateur alike, will continue to watch it closely as it does.

The light curve of Betelgeuse (alpha Orionis) over the last few months. Its historic dimming episode appears to have ended in early February and it is now beginning to brighten again. Data via the AAVSO

The autumnal equinox for the southern hemisphere occurs on Friday 20th of March in 2020. After this day the nights become longer than the days.

Venus continues to cruise along as the evening star above the northwestern horizon during March. It passes the outer ice giant Uranus passes by in the background on the 8th and 9th at a 2 degree separation, wide enough that Uranus may not be that easy to spot. You will need at least binoculars to help you with this sighting, and if using a telescope, remember that the full moon is 0.6 degrees in width – so Uranus will be at least 3 full moon-widths away from Venus.

Mars covers quite a bit of sky this month, meeting up with both Jupiter and Saturn in the morning sky. Rising at 1am, it is the fainter of the two planets above the Moon on the 19th (Jupiter is brighter), but it is closest to Jupiter two nights later on the 21st March. Mars continues on to meet Saturn on the 1st of April. 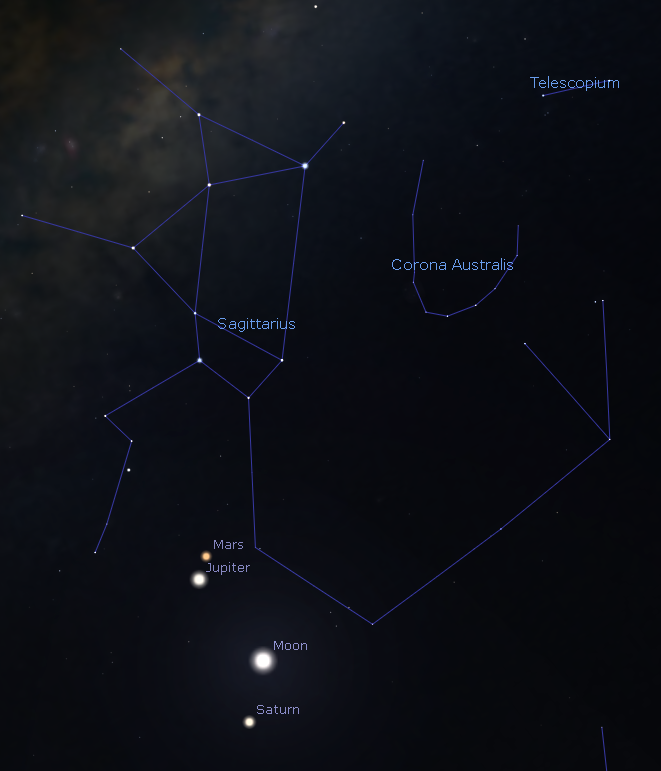 The Moon and planets in the morning sky of the 19th March, looking East.

The latter half of March will be the best time to see Mercury in the morning sky during 2020. It will rise around 4am during the second half of March, well before morning twilight, giving you plenty of time to catch this quick-moving planet. A slender waning crescent Moon will be next to it on the morning of the 22nd.

Canis Major, the Big Dog of the skies, passes directly overhead in southern Australia. He is depicted looking towards his master, Orion the Hunter, and the fleeing shape of Lepus the Hare, underneath Orion’s feet. As he rises in the east with Orion he seems to be lying on his back in the Milky Way, with several bright stars marking his spine and legs.

On his shoulder shines Sirius, the brightest star in the sky. Most of the mythology of Canis Major is connected to Sirius as the constellation itself did not take on its current form until Roman times. Although it is the brightest star Sirius is not the closest star we can see in the sky, but it is still close to us, lying around 8.7 light years away. It is a hot, white star that will shine brightly for a long time to come.

Sirius means “Scorching” and was named so by the ancient Greeks as it rose and set with the Sun during the northern hemisphere summer 3000 years ago. It was thought that the combined heat of the two stars caused the hot weather of late summer. It was also commonly known as the Dog Star, a tradition that reaches back far before Babylonian times. This is where the expression “the dog days of summer” comes from.

Sirius was an important star to the ancient Egyptians. They watched for the heliacal rising of Sirius to indicate the start of the annual flooding of the Nile River (a heliacal rising is when a star is first seen in the eastern sky before dawn after it has passed behind the Sun). 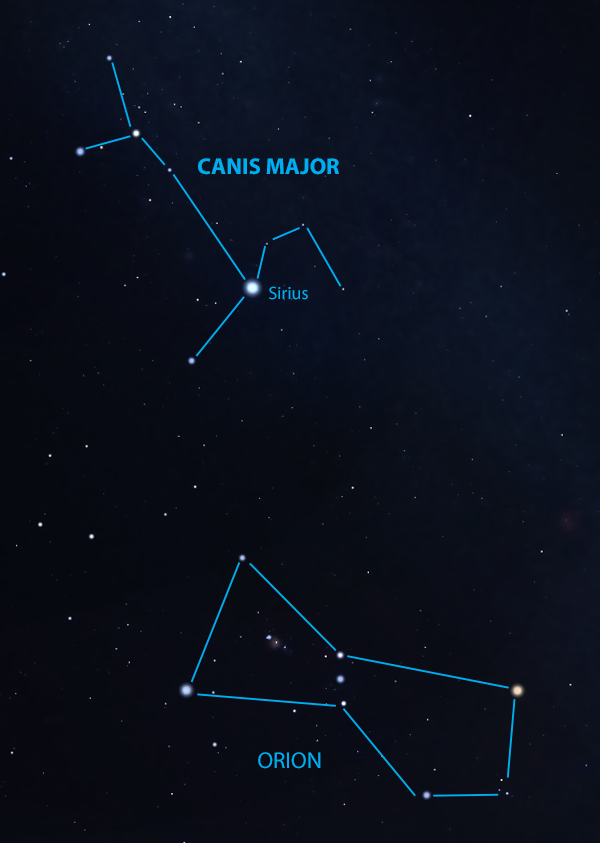 Canis Major is high overhead as it gets dark now, but still following Orion down to the west as the night goes on.

Sirius B, also known as “the Pup,” is the white dwarf star companion that orbits Sirius A, the brightest star in our night sky. It was first seen in 1862, after astronomers realised it was probably there from the wobble in Sirius A’s proper motion across the sky, but it was not recognised as a white dwarf until 1915. At that time, it was only the second white dwarf to be identified. 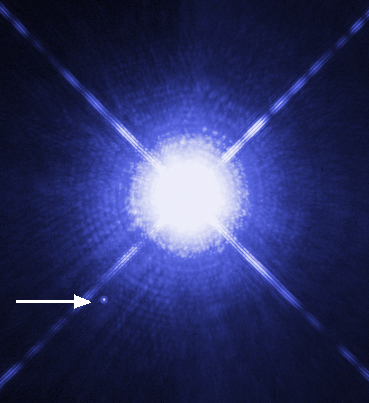 White dwarfs are the end stage of small stars like our own Sun that don’t have enough mass to collapse into neutron stars. They have already puffed up into red giants, shed their outer layers, gone through the brief 10,000 year-long planetary nebular stage, and all that is left is a very dense core of hot burning material such as carbon and oxygen and other low-numbered elements. This ember will very, very slowly cool down to ash over billions of years.

Sirius B takes 50 years to orbit Sirius A, and for the next ten years or so it will be in the best position for you to be able to sight it, as it will be at its furthest separation from the primary star. It will still be a challenge, as Sirius A is so bright, but you can take steps to make it a little easier. 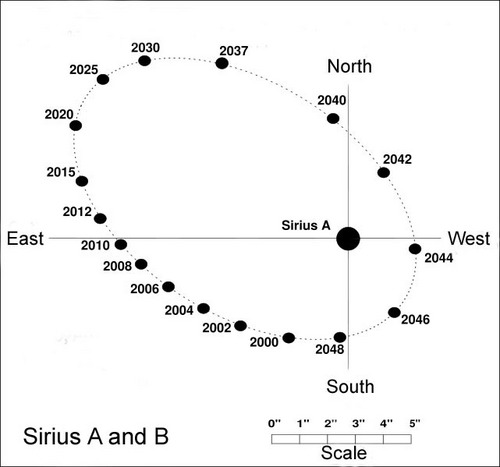 The location of Sirius B in relation to Sirius A over the next 50 years.

Piecing the Solar System Together

Recent releases of results from studies of two different bodies in our solar system have greatly increased our knowledge of how the planets and larger asteroids came to be.

The first piece of information to hit the news was from the New Horizons mission team. New Horizons flew past Pluto in 2015, then went on to give us the first close up view of a Kuiper Belt object at the beginning of 2019. Since then they have been studying the geology of 486958 Arrokoth, the now official name for the asteroid 2014 MU69, which you might have previously known as Ultima Thule. They were able to determine that Arrokoth was indeed a remnant from the beginning of the formation of the solar system, and it formed as lumps of rock and dust in near proximity to one another slowly pulled themselves together, rather than by chunks of rock flying about at high speed and randomly hitting each other to then form a bigger lump. 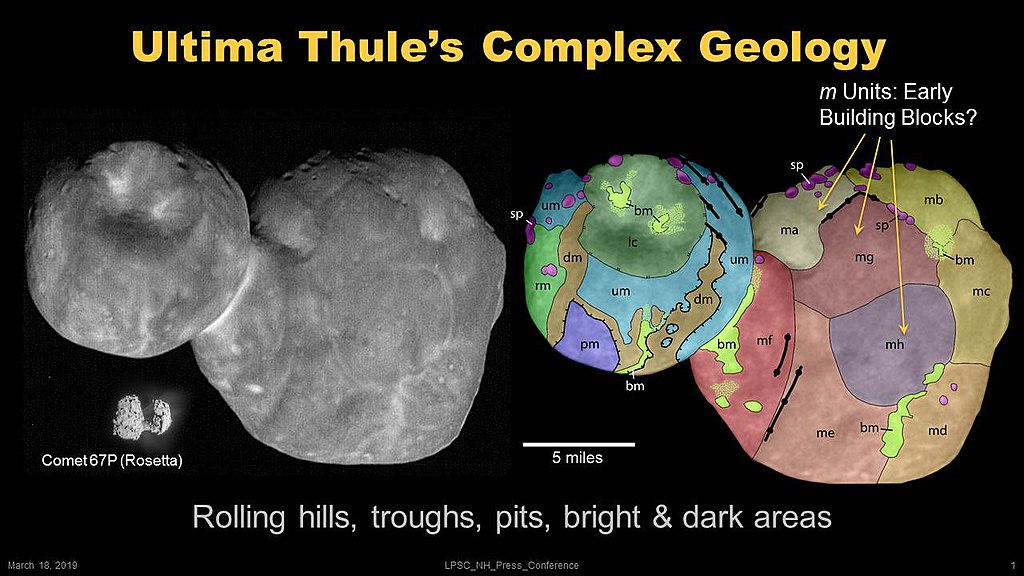 Closer to home, the Mars InSight lander, which touched down on the red planet in November 2018, has been listening out for earthquakes (or marsquakes, if you prefer) to learn more about the inside of the Mars. Earthquakes are how we learn about what is inside the Earth, as the shockwaves they create are bent and reflected by the different density of rock and metal inside our planet.

InSight has found Mars is seismically active, although the strongest tremor it has recorded is only around magnitude 4. Because Mars doesn’t have tectonic plates floating on liquid rock like Earth does, some of these quakes are thought to be from the ongoing shrinking process of the planet as it continues to cool. 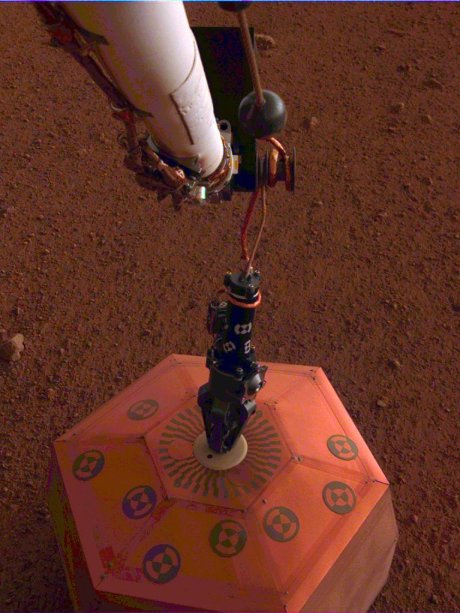 Under the cover is the seismometer listening for earthquakes and other movements, such as meteorite impacts, on the surface of Mars. Credit: NASA/JPL

Scientists are still trying to determine how solid the core of Mars is, however, and need to collect more data to be certain about its current state. It’s currently thought that it’s not liquid, though, as Mars no longer has a global magnetic field to shield it from the solar wind, like Earth does. But it had one once, as old lava flows on Mars have particles all magnetically aligned in the same direction as the global magnetic field when they formed and cooled.

Mars will be at opposition again this year in October, which means more spacecraft will be launched to take advantage of the planetary alignment for a quick journey. Another as yet unnamed rover similar to Curiosity from NASA is due to be launched later in 2020, and Japan has announced a planned sample-return mission to the Martian moon Phobos in 2024.