Now is good time to see meteors, with the Eta Aquarid meteor shower active during the early hours of the morning in the first week of May, with the Moon turning new during this week as well, so it won’t be much in the way this year. Even if you don’t want to be up in the cold morning hours to see this major shower, keep looking up during the evenings, as there are a couple of smaller meteor showers active just after sunset at this time of year.

Did you see the picture of the black hole from the middle of the galaxy M87 in Virgo release on April 10th? Want to know more about it? Derek Muller, who you might know as the host of the documentaries “Uranium – Twisting the Dragon’s Tail” and “Vitamania,” and also runs a series of science communication videos under the name “Veritaserum”, has put out two excellent videos explaining how black holes work and what the image represents. The first video is here, and the second video is here. 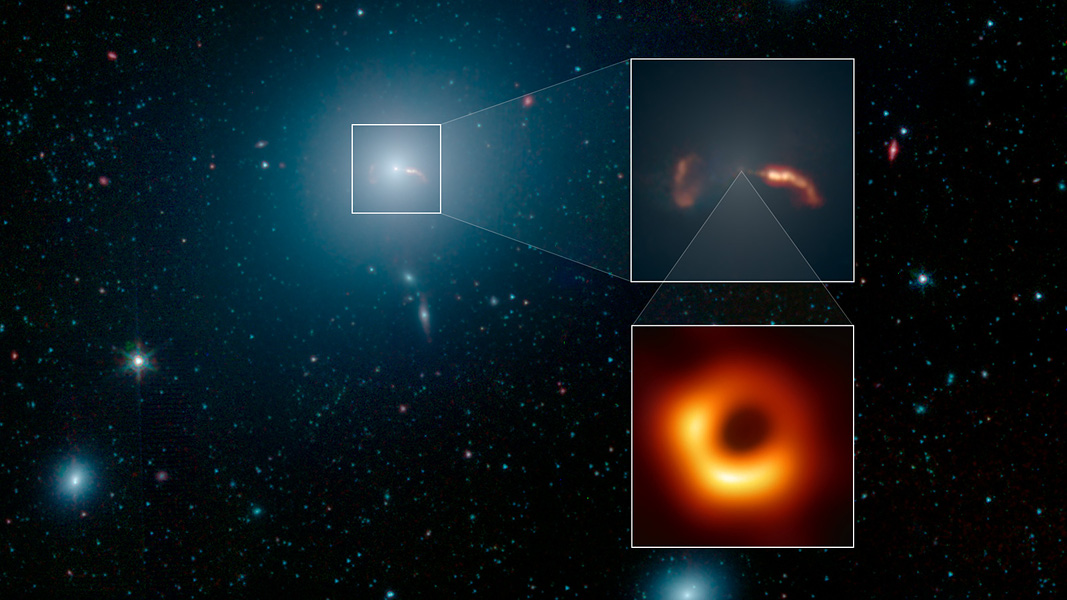 The first image of a black hole, between the huge jets of plasma it ejects, from the middle of the galaxy known as M87, in Virgo.

There are planets coming and going this month, but at long last we will have a decent target for our telescopes! Mars lingers low on the northwest evening horizon during May but it’s on the far side of the Sun at the moment and will just be a small dot in the telescope. Not much to see here, unfortunately. But turn eastwards and Jupiter is rising in the early evening during May, looking big and bright on its way to opposition in early June. It’s hard to miss, though if you’re not sure, the Moon will be next to it on the 20th.

Saturn is lower down, rising two hours later. By the end of May it will be rising at 8pm. Then we will have all winter to enjoy the two giant planets. It is below the handle of the Teapot asterism of Sagittarius at the moment. 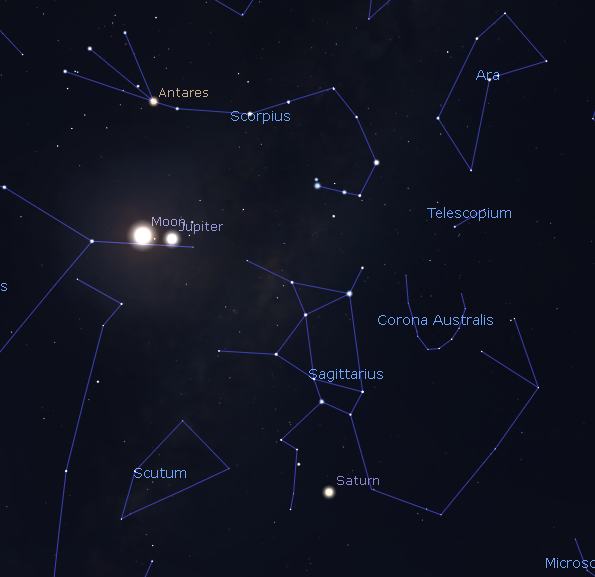 The Moon, Jupiter and Saturn, looking eastwards on the evening of 20th May, 2019.

Venus is still in the morning sky, but May will be your last month of easy viewing for this planet for a while. If you are a regular sky watcher you should notice it start to sink down towards the morning twilight during May and into June. It will reappear in the evening sky at the end of the year. It’s not a good month to view Mercury, either. If you don’t catch it during the first week of May you will have to wait until mid-June for the next opportunity to see it, in the evening sky.

Crux has the smallest area of all the 88 modern day constellations. It was first recognised as a Cross, or a crucifix, when European sailors first started travelling to the southern hemisphere during the 1500’s. Before this time the five stars we know so well were considered to be part of Centaurus by the Greeks, as several thousand years ago the Cross could still be seen from the Mediterranean region. The sailors found it to be an excellent navigational aid, since its long axis points almost directly to the south celestial pole in our age, which is helpful since we have no distinct pole star to mark our southern pole.

Since Crux was last published as constellation of the month, the five brightest stars have all been given official names by the International Astronomical Union. The brightest star, alpha Crucis, is also known as Acrux, which lies at the bottom of the Cross (think of how the Cross appears on the Australian flag). The second brightest star, to the left, beta Crucis, is Mimosa and the third brightest star on top of the Cross, gamma Crucis, is Gacrux. Epsilon Crucis, the fifth star is Ginan, which means “a dilly-bag of songs” in the language of the Wardamun people of the Northern Territory. A new name for delta Crucis is yet to be confirmed. 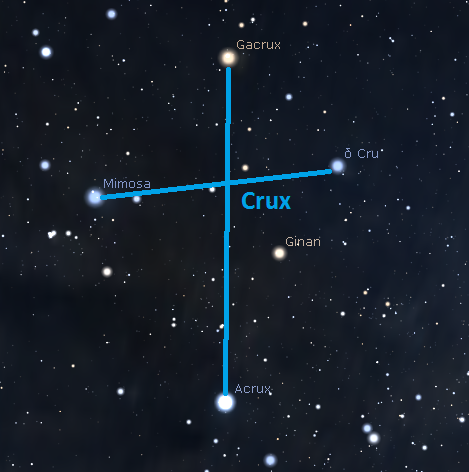 Just the east of beta Crucis (Mimosa) is one of the best-known open clusters in the southern sky; the Jewel Box (NGC 4475). To the naked -eye it appears as a faint star, hence the designation kappa Crucis. Binoculars show it is more than just one star, but you really need telescope to show this cluster at its best. It has a distinctive orange star nestled in the middle of a triangle of white stars. The cluster was so named by Sir John Herschel, the son of William Herschel, who thought it looked like a collection of coloured glass jewels. It lies about 6000 light years away. 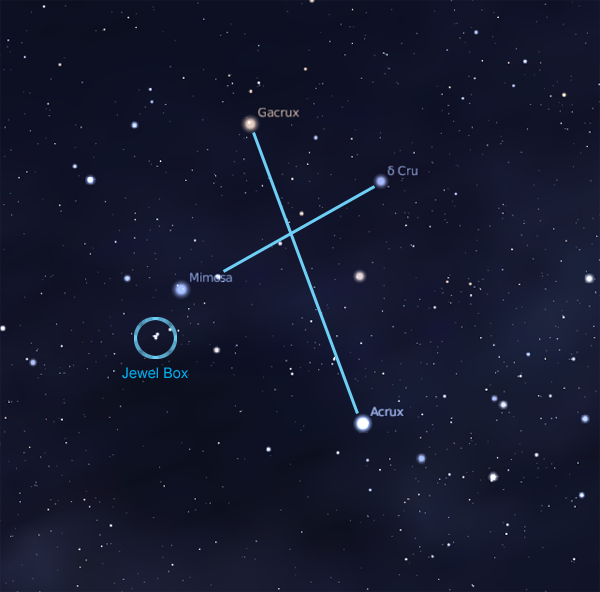 The Jewel Box cluster is a short hop away from Mimosa (beta Crucis.)

How Long is a Parsec?

In the original Star Wars movie, Han Solo boasts that his ship, the Millennium Falcon, is fast enough to have completed the Kessel Run in less than 12 parsecs. There was a collective groan from the astronomical community at the time, as they knew a parsec was a distance, not a time unit, as the movie seemed to imply. In later years, the mistake was retro-fitted with a distance explanation. So what is a parsec?

Parsec is a contraction of “parallax second” or more formally “a shift of a second in parallax.” It is equal to a distance of 3.26 light years.

It’s easy enough to demonstrate parallax shift by yourself, just by holding a finger upright out at arm’s length. Now, close one eye, and look behind it. Then swap eyes. Notice how the background behind your finger seems to jump back and forth as you swap between your left and right eyes? That is the parallax effect in action!

We can use the same effect to measure the distance to nearby stars, by using the orbit of the Earth as a baseline. So, for example, you would note the position of the star at the June solstice, then note its position again at the December solstice. There should be a perceptible shift in its position with respect to the stars around it, and with some simple geometry you can calculate the distance to the star. Sounds simple, doesn’t it? In reality, it’s difficult, as the shifts are so small, because the stars are so far away. And the nearest star, Alpha Centauri, has a parallax of less than one arcsecond, being 4.3 light years away. 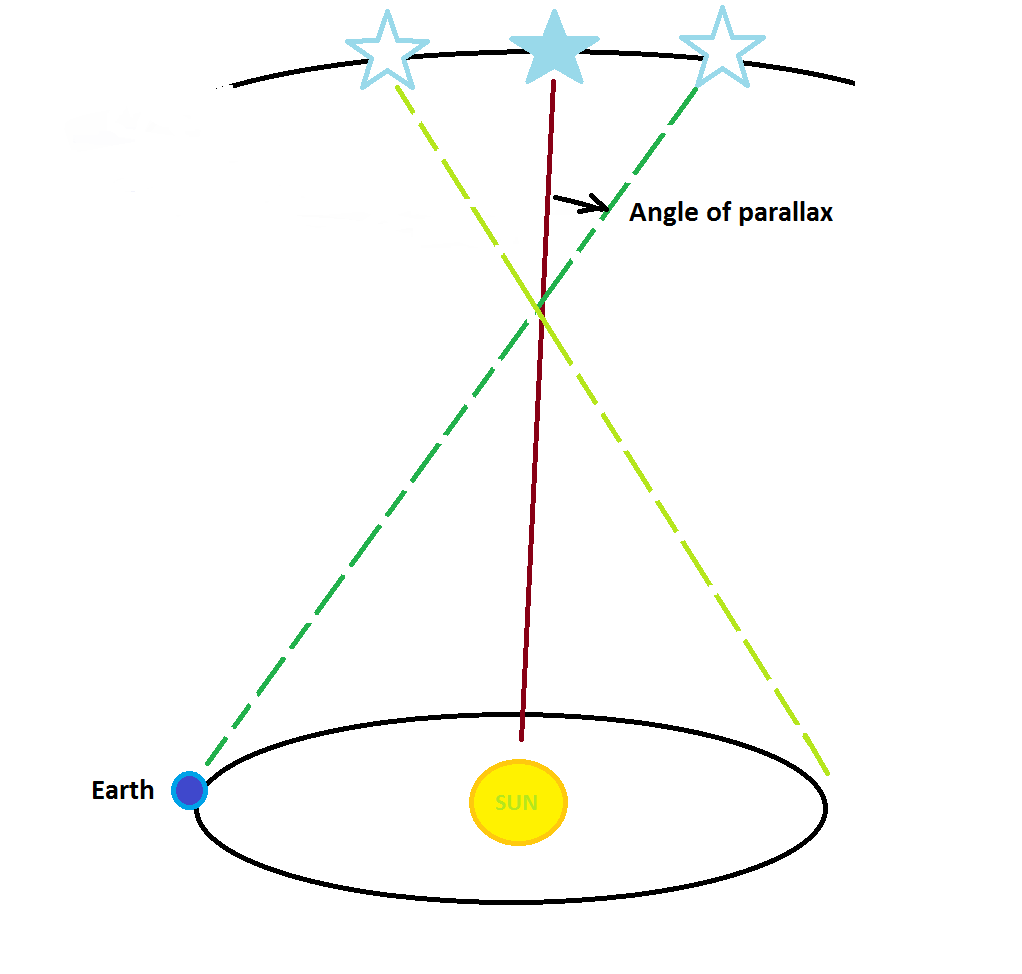 Using parallax to measure the distance to the stars only really works for nearby stars, too. That is, stars within a couple of thousand light years of us. Astronomers have sent up a series of satellite observatories over time to measure parallax more accurately than we can down here on Earth. The Hipparcos mission (1989-1993) focused on measuring star parallaxes, and more recently, the GAIA mission (launched 2013) has extended and improved this knowledge. There are many other methods for measuring distances in the universe, but they are beyond the scope of this discussion.

So to bring this back to Star Wars, this is the real reason why the young Han takes a short-cut out of Kessel at the end of Solo. The safe passage was undoubtedly longer than 12 parsecs. And lucky for him, he made it!