Now is good time to see meteors, with the Eta Aquarid meteor shower active during the early hours of the morning in the first week of May. The waxing Moon may get in the way towards the end of the week, though, drowning out the fainter meteors so you might see fewer than usual. Even if you don’t want to be up in the cold morning hours to see this major shower, keep looking up during the evenings, as there are a couple of smaller meteor showers active just after sunset at this time of year. 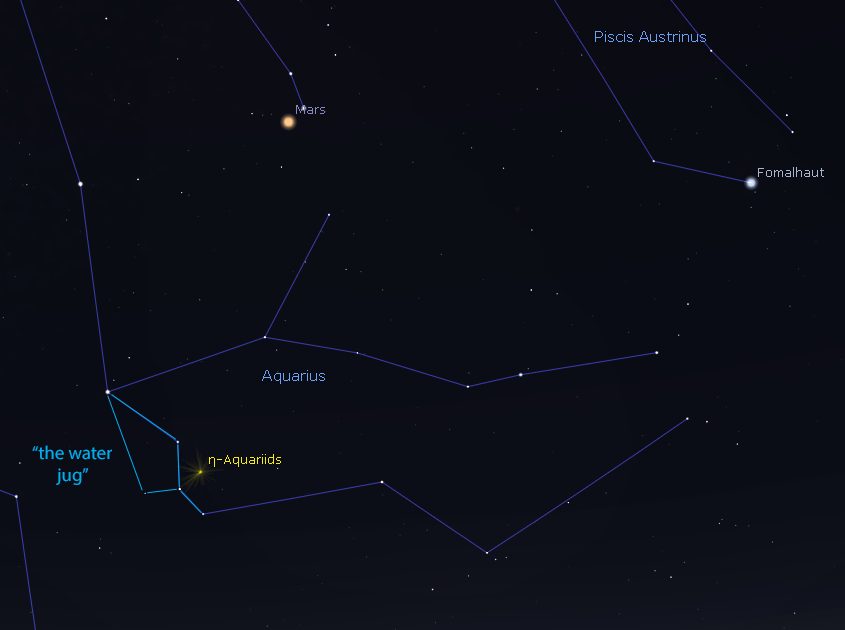 The radiant for the eta Aquarids is near a “Y” shaped asterism of stars that forms the mouth of the water jug. Aquarius, the Water Bearer, is pouring water out from the jug. This year Mars will also be in the picture, looking east about 3 am, and the Moon in the west.

Here is some good news – Betelgeuse has returned to its normal brightness! You may remember we mentioned back in February that this famous red giant on the shoulder of Orion the Hunter had dimmed more than usual over our summer months, but was just showing signs of beginning to brighten again at the end of January. Well, it’s taken about three months, but it’s got there. The light curve below shows how Betelgeuse’s relative brightness over the last four months, clearly showing where it reached a minimum around 70-80 days before the start of May. 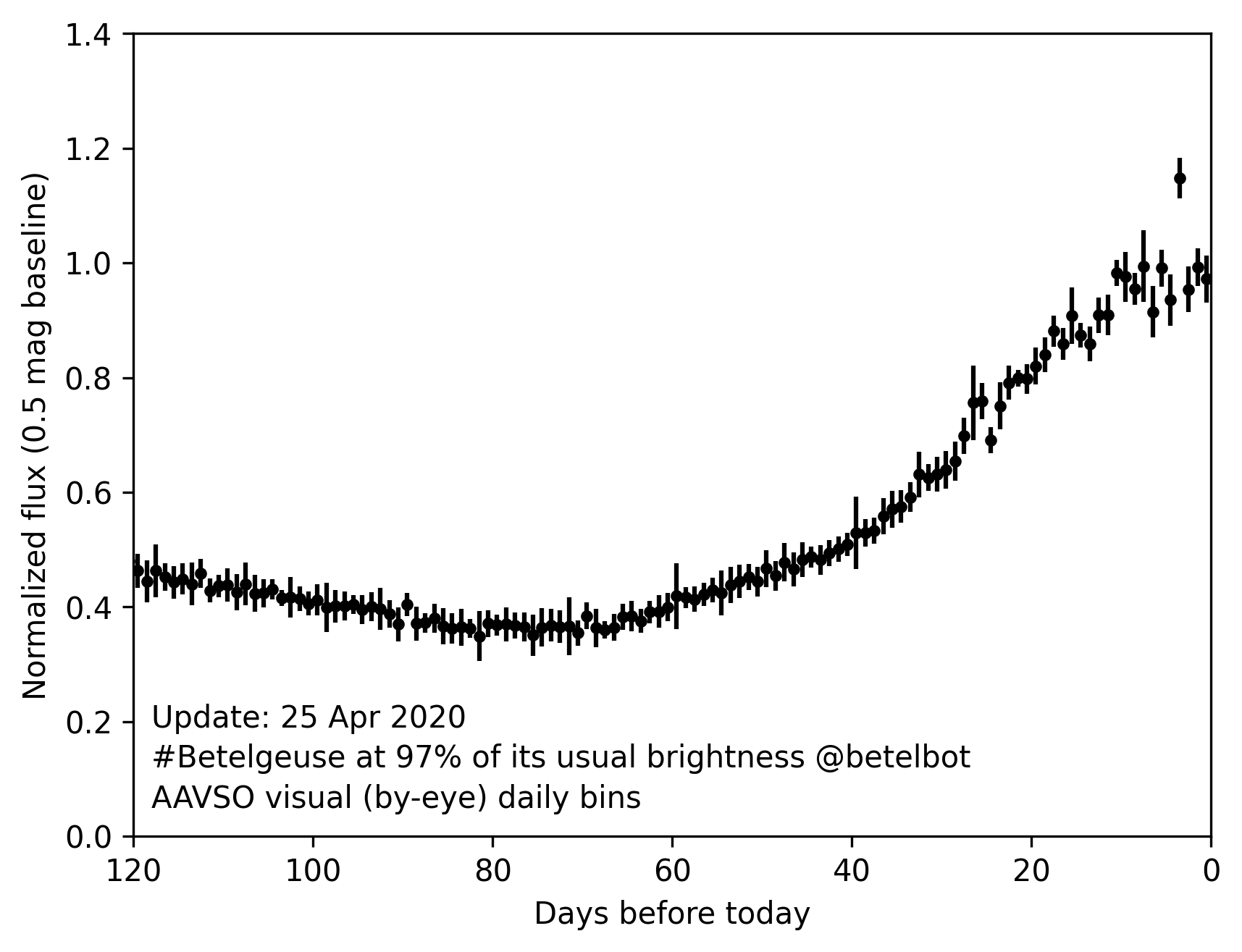 Venus will change sides of the Sun from the evening to the morning sky this May. It will happen quickly, as our sister planet will pass between Earth and the Sun, but it also means if you have a telescope you may catch a glimpse of Venus as a crescent. Venus is now far to the northwest along the horizon, but shining as brilliantly as ever, and will still be easy to see during the first week of May. During the third week it meets up with Mercury on the 22nd and the Moon on the 24th, low down in the twilight, so make sure you have a clear horizon in that direction to make it easier to see.

Jupiter and Saturn have now paired up for the rest of the year and are rising mid-evening. They start the month rising around 10.30 pm but by the end of May are rising at a more respectable time of 9 pm. You really need to give them an hour or so to rise above the murk on the horizon to get a decent view, so you can catch them before midnight. But better times are coming for these two giants! We just need to patient. 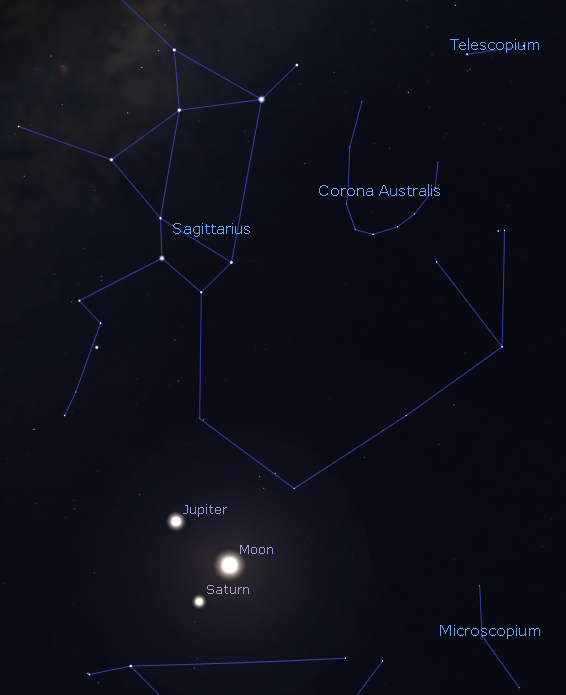 Looking east late on the 12th of May, the Moon is between Jupiter and Saturn.

Mars is still racing eastwards and moves from the tail of Capricornus in Aquarius during May. It rises around midnight. Opposition for Mars is in October, so it is still a bit early to see much detail on Mars yet (and fingers crossed we don’t get a global dust storm again this time, like we did the last opposition.) The Moon will be below it on the 16th.

There are no bright planets to see on the eastern dawn horizon this month.

Corvus is a small but prominent constellation to the south of Virgo in the sky. He is connected by story to the nearby constellations of Hydra the Water Snake and Crater the Cup. The story form Greek mythology tells of how Apollo asked Corvus to fetch him some water in his Cup. Corvus did this but on the way back he was distracted by some sweet ripe figs. Much later Corvus realised how long he had taken on his errand and snatched up a snake (Hydra) in his claws as an excuse for the delay. Apollo did not believe his excuse and punished the crow by denying him a drink from the cup leaving him thirsty, which is why we still hear them croaking today.

The body of Corvus makes a ‘baseball diamond’ shape in the sky, with two stubby wings to the north and south.  Watch for him flying overhead in the evening sky during the winter months. 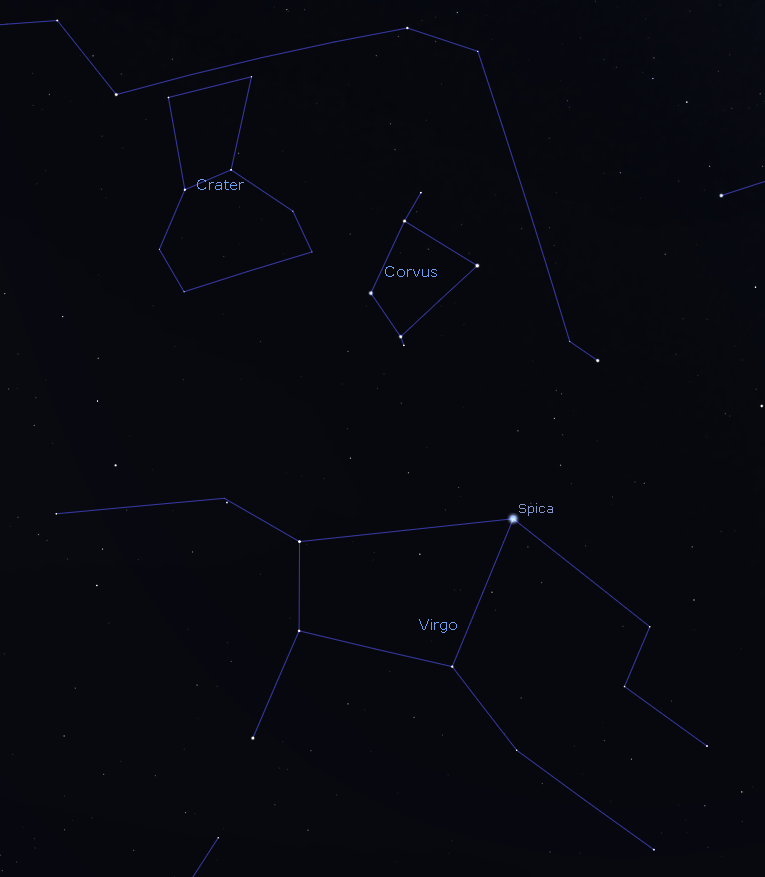 Corvus can be found to the south of Virgo. Crater, the cup the Crow carried is next it, and the tail of Hydra the water snake curls around them.

The Emu in the Sky

This object doesn’t need a telescope, just your eyes! The Emu is made up of the dark dust lanes in the Milky Way during the colder months of the year and is one of the few Indigenous pieces of star lore that is common across southern Australia.

If you are in a dark location on a moonless night and can see the Milky Way, look to the lower left of the Southern Cross for the large dark nebula known as the Coal Sack. This is a large cloud of cold dust blocking out the stars behind it in the Milky Way. This odd blob also marks the head of the Emu. Follow the neck of the Emu down past the Pointers, alpha and beta Centauri, then the back of Emu is where the central bulge of the Milky Way spreads out near Scorpius. 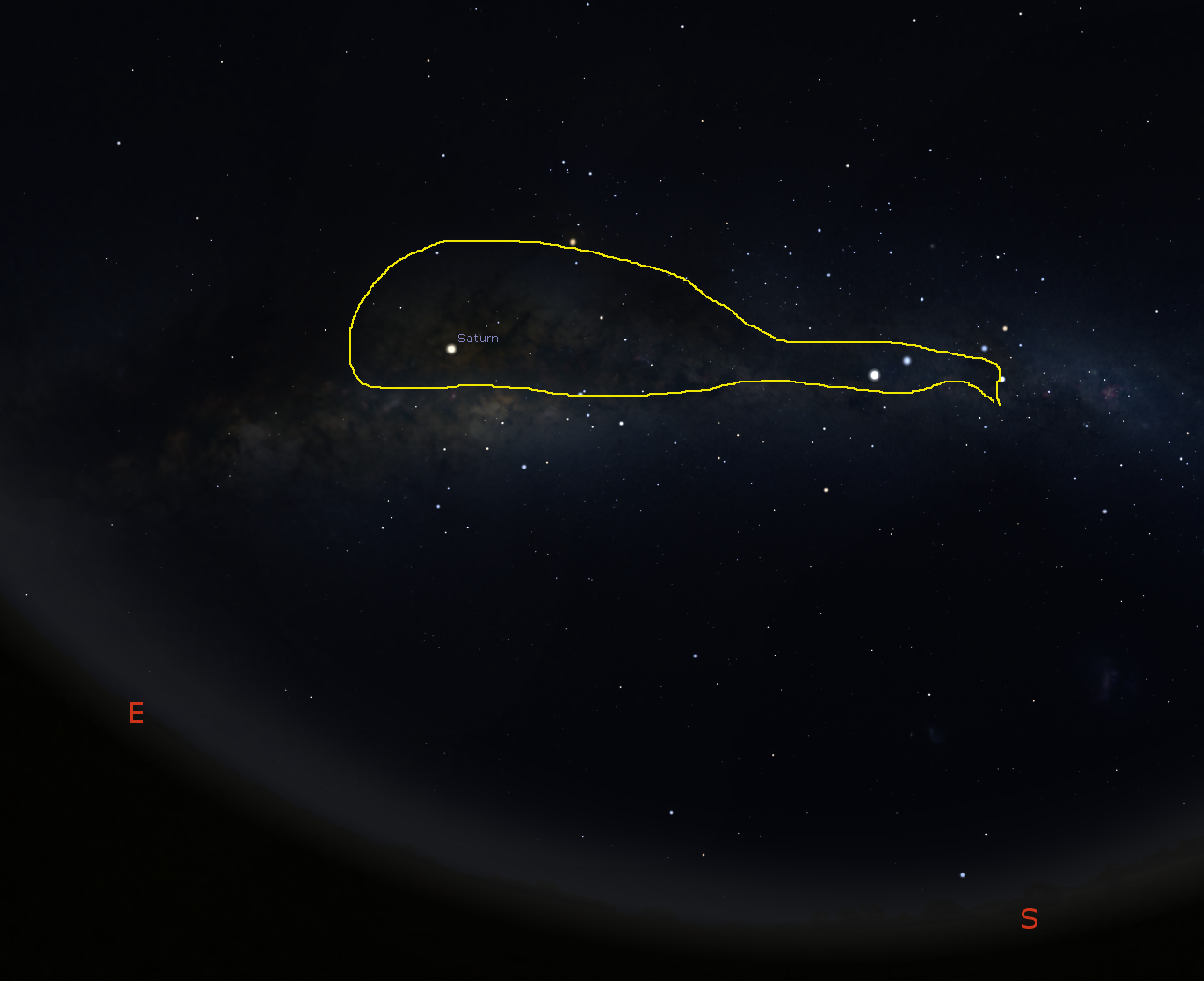 If you can see the Milky Way, look for the Emu in the sky, using the dark dust lanes in the Milky Way. It stretches from the Southern Cross to the central bulge in the star clouds of our galaxy.

You don’t need to visit an observatory or own a telescope to do astronomy, all you need to do is go into your backyard and look up. Globe at Night is a citizen science project to record how bright the stars are at your location each month and your eyes are all you need for it.

Why should we care how bright the stars are? It’s really a measure of how dark the sky is, or how much light pollution there is near to you. Light pollution is excess light that spills up into the sky at night, which is not only a waste of energy (and money) but its bad for our health and disrupts animal routines as well. It can also be a measure of air pollution, and natural conditions such as dust and moisture can also affect what astronomers call “seeing.”

So how will your observations help? They may not seem much at the time you make them, but the Globe at Night has been running for 15 years, so they can use the data they have collected over that time to make comparisons and see how the sky brightness has changed over time. And the observations you take now will no doubt be compared with future observations! Imagine what they could reveal, especially this year as we are driving less, and air pollution is already noticeably less around the world as we all stay home to avoid spreading COVID-19.

To take part in the Globe at Night monthly sky surveys, go to the website and follow the six steps. You can download the star charts in the activity sheet section (make sure you get the ones for the southern hemisphere!) and print them out, make yourself a red torch, and learn about dark adaption. Then mark off the observing windows on your calendar and practise how to find the target constellations. Have fun! 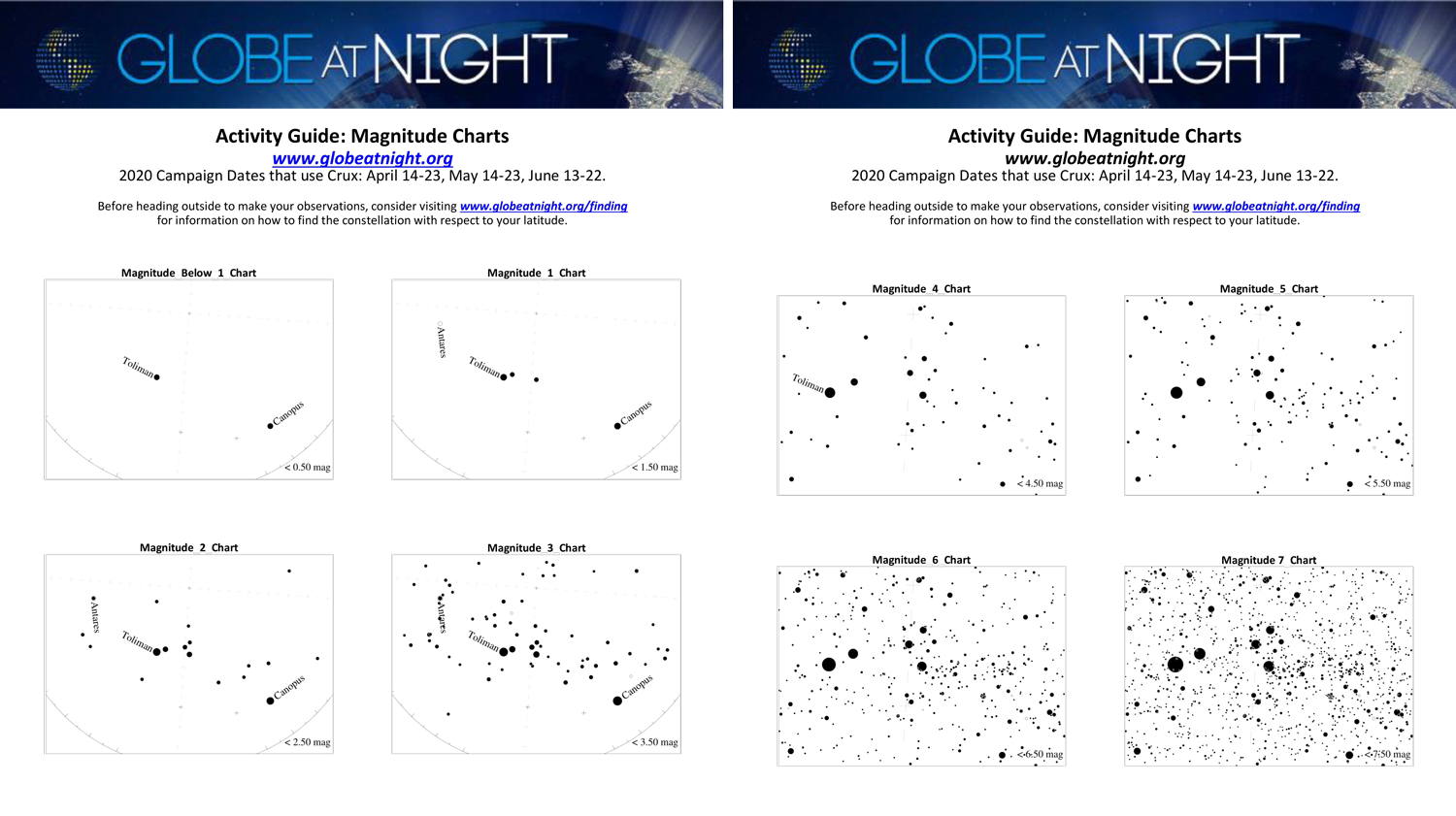 The magnitude brightness charts for Crux the Southern Cross. You look in the direction of Crux and decide which chart best matches your view of the sky from your location. Then you include that in your report.

Are you interested in an audio guided stargazing session at home? Give our podcast Audio Guide to the Galaxy a go!