Orion has nearly finished his long march across the sky, setting in the West just after sunset slightly earlier each day as the month progresses. This means that you can then turn around and watch Scorpius rise in the east, as the two great constellations eternally chase each other across the sky. Scorpius is easily recognised by the giant red star Antares, which marks the heart of this celestial arachnid. 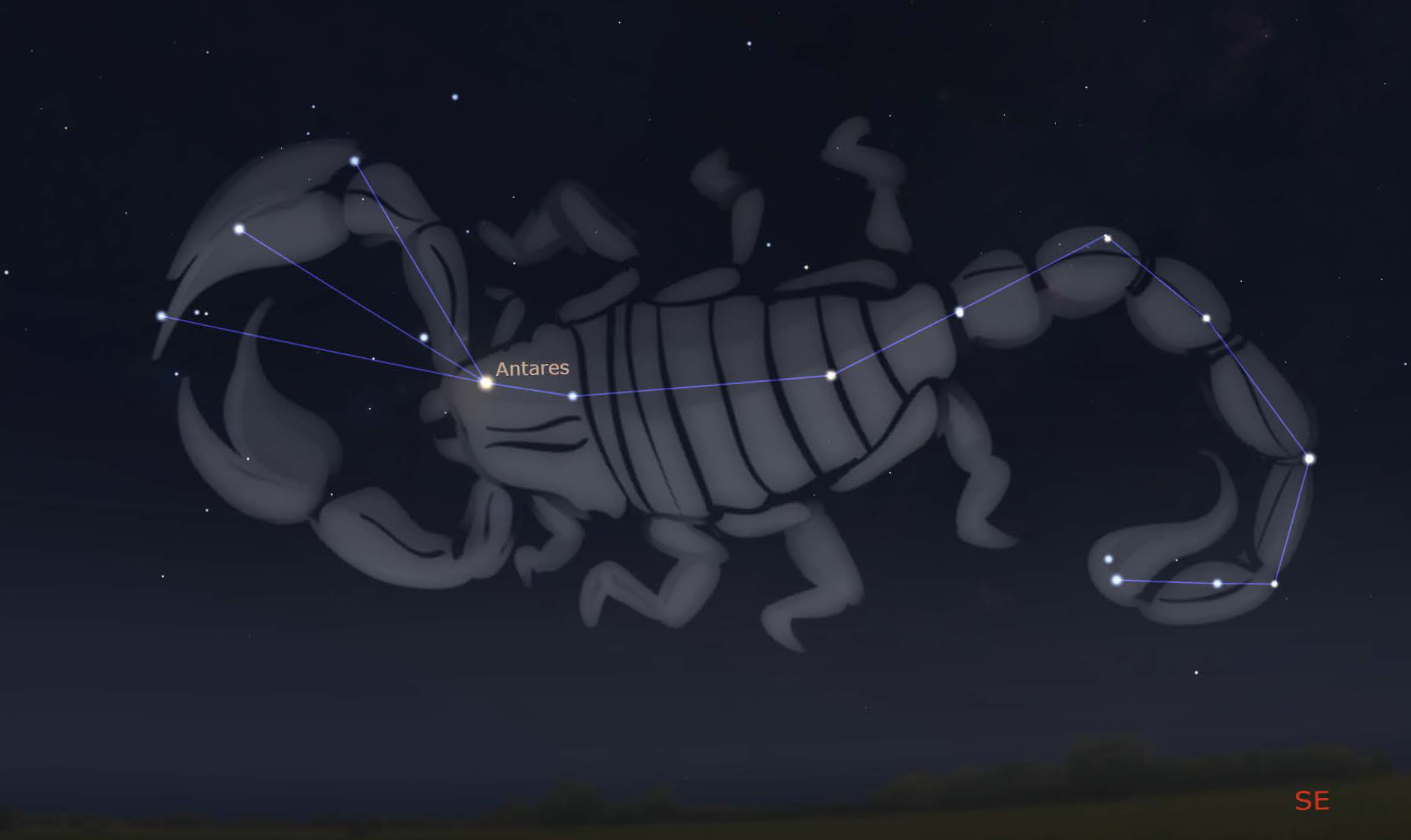 Venus, Mars, Jupiter and Saturn continue to put on a dazzling show in the East just before sunrise.

This month we are treated with two new moons, May 1 and May 31. You might hear this referred to as a ‘black moon’ though of course this is just a name, the moon won’t actually be changing colour. Months with two new moons are rare because you need to have the new moon occurring right at the start of a month so that it can go through a complete lunar cycle and repeat before the month is out. The irregular length of months in the calendar combined with the lack of resonance between Earth’s year and the Moon’s orbital period make months like this infrequent.

There is a lunar eclipse on May 16th. This is the sister eclipse to the partial solar eclipse over the South Pacific on April 30th. Unfortunately, it’s not visible from Australia and will have already finished by the time the moon rises in our sky.

The Eta Aquarids meteor shower peaks on May 6-7 this year. The best time to see these is in the eastern sky early in the morning before sunrise, and they will be nicely backdropped by Mars and Saturn. In good conditions you might expect to see a meteor every minute or two. These meteors occur as Earth passes through the dust tail from Halley’s comet and sweeps up specks of dust that separated from the comet long ago, a bit like the ‘bug on the windscreen’ effect. 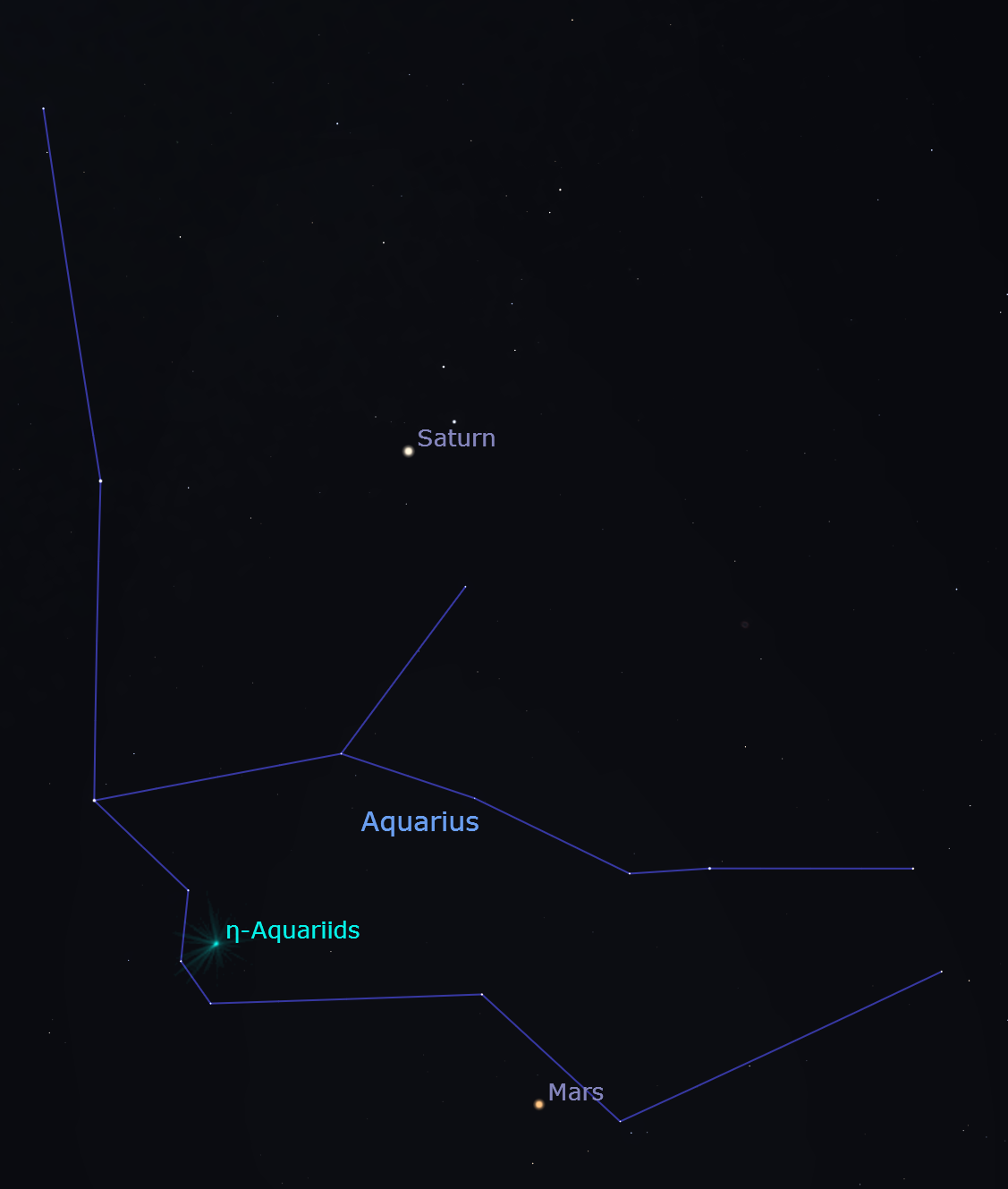 The wonderful alignment of planets continues in the early hours of the morning all month. Saturn rises at about midnight followed by Mars, Jupiter and Venus. Technically Neptune is there as well but you will need a telescope to see it.

Jupiter and Venus have an extremely close encounter on the morning of May 1. Jupiter continues to appear to move rapidly west, going on to have another close encounter, this time with Mars on 29, 30 May.

On 25 May the waning moon adds a nice backdrop to the looming encounter.

Mercury is just barely visible on the western horizon in the minutes after sunset but don’t get your hopes up. 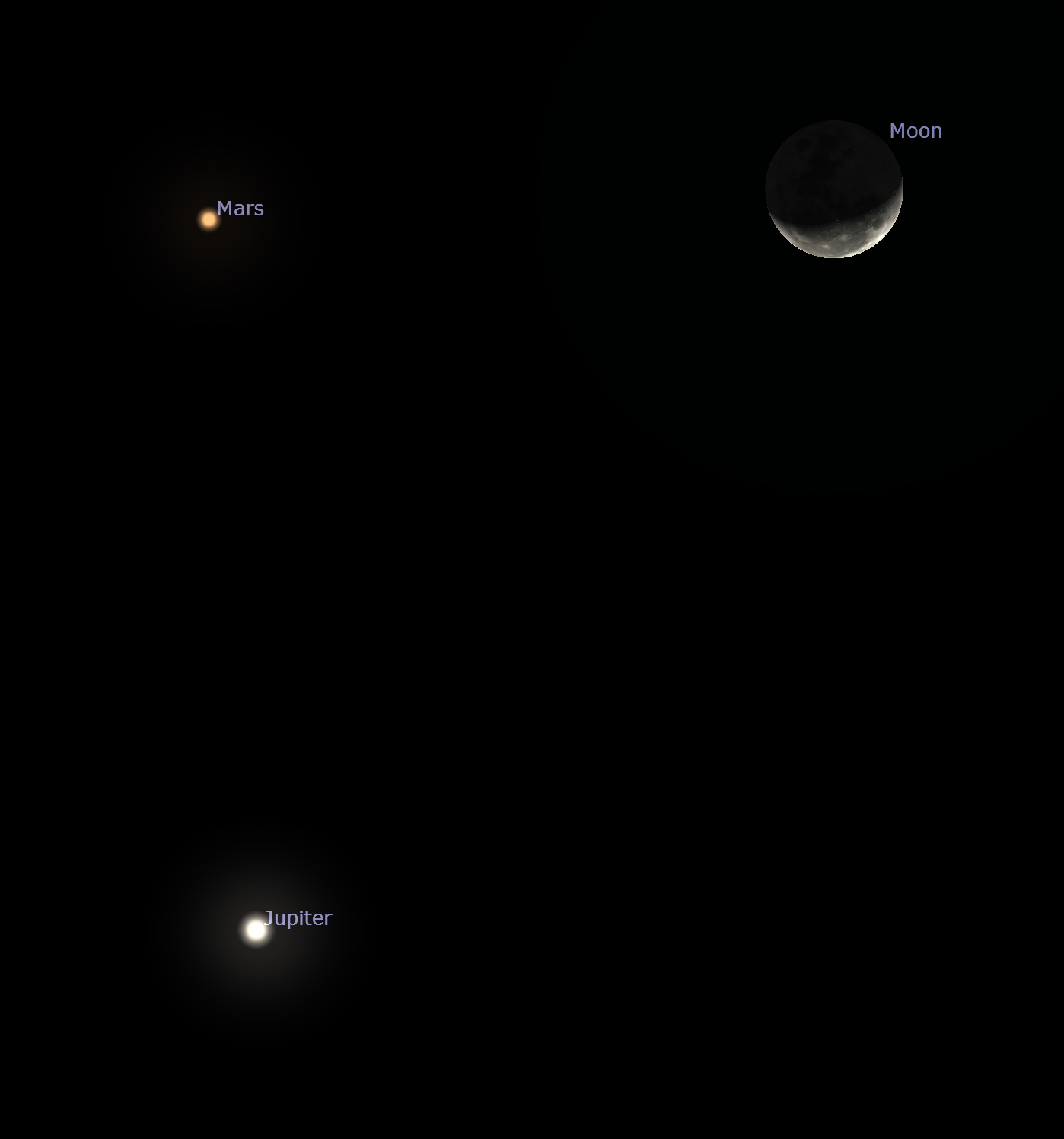 Image: Mars, Jupiter and the Moon will easily fit under your outstretched hand on the morning of 25 May

Aquarius is a zodiacal constellation and the 10th largest in the sky. Despite being well known, it is rather unremarkable to look at, with the brightest star Beta Aquarius being only magnitude 2.9. Beta Aquarius is a yellow supergiant of about 5 solar masses. The higher mass forces an accelerated rate of fusion within the star which causes is to become hotter and swell larger, sitting comfortable now about 50 times the diameter of the sun. Beta Aquarius is used as a reference star in stellar classification systems.

You will be able to see this constellation in the astern sky in the hours before sunrise this month. 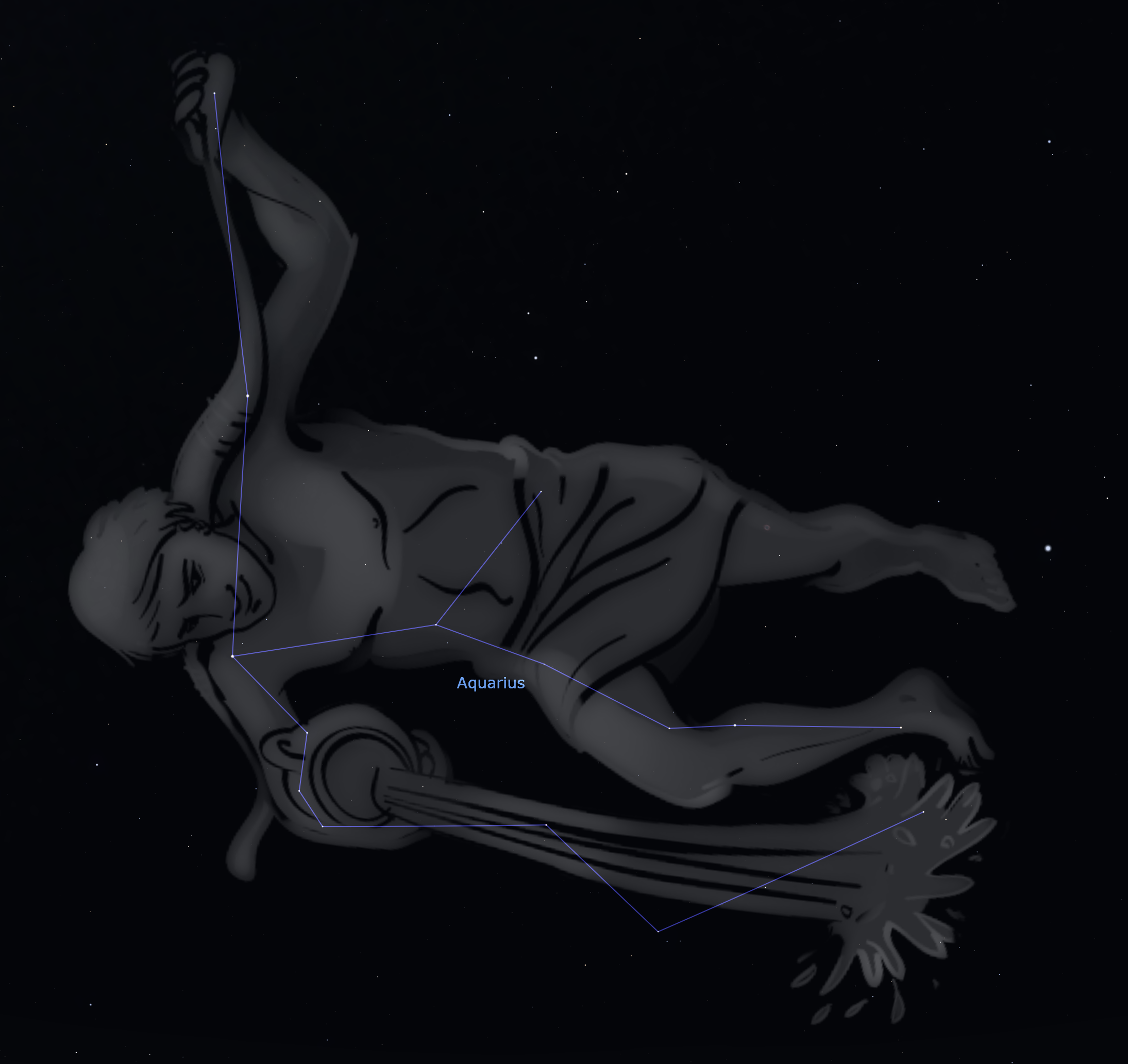 Aquarius is one of the oldest constellations, existing in documentation since the 2nd century CE, and has pretty much always been associated with water. Some of the constellations near Aquarius, such as Pisces the fish and Delphinus the dolphin, also have a water theme to them. Egyptians and Babylonians noticed the appearance of Aquarius in the sky around the time of seasonal flooding. In Greek mythology Aquarius represents the boy Ganymede, who was lusted after by Zeus and brought to Mt Olympus to be the water bearer for the gods. Jupiter’s largest moon Ganymede is now named after the boy.

The constellation is home to the globular clusters M2 and M72 as well as the the Saturn Nebula and the very well known Helix Nebula which are both planetary nebulae. 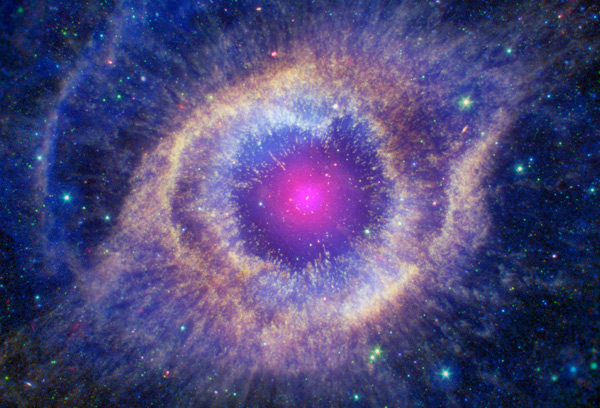 Many stars in Aquarius are known to have planets. This includes Gliese 489, which is the first planetary system discovered around a red dwarf star. This system is all the more remarkable as the three outer planets are in a 1:2:4 resonance, with the outer most planet completing one orbit for every two of the next planet in and every 4 of the next one in. This is called Laplace Resonance after mathematician Pierre-Simon Laplace who noticed the same pattern in the obits of Ganymede, Europa and Io around Jupiter, bringing the story full circle.

The 73rd entrance on Messier’s catalogue is an asterism of stars inside Aquarius notable for its distinctive Y shape. 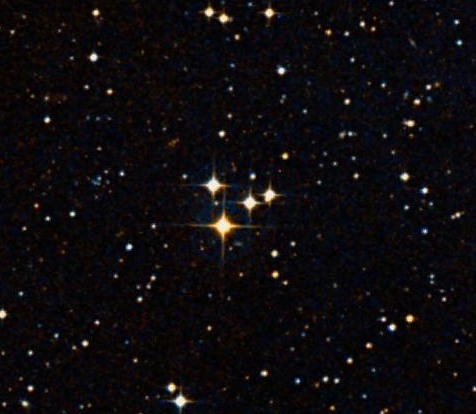 M73 was originally thought to be the remnants of a loosely bound open cluster of stars.

But determining whether stars that look close together are actually close together and bound by gravity is a difficult task. Successively finer studies of M73 have argued for and against it being a cluster rather than a chance alignment of stars.

It was only in 2002 that high resolution spectral analysis of the stars in M73 determined that they are at very different distances from the solar system and moving in very different directions, allowing the conclusion that they are not a gravitationally bound system, but instead just a coincidental alignment of stars.

The Space Launch System and Artemis 1

When it comes to mega moon rockets, there’s really only the Saturn V that has anything to say for itself, having launched 6 successful (and 1 unsuccessful) crewed missions to the moon.

The last decade however has brought about the 21st centuries’ offerings for lunar and interplanetary human exploration. SpaceX have offered up Starship while NASA have finally unleashed the Space Launch System (SLS). 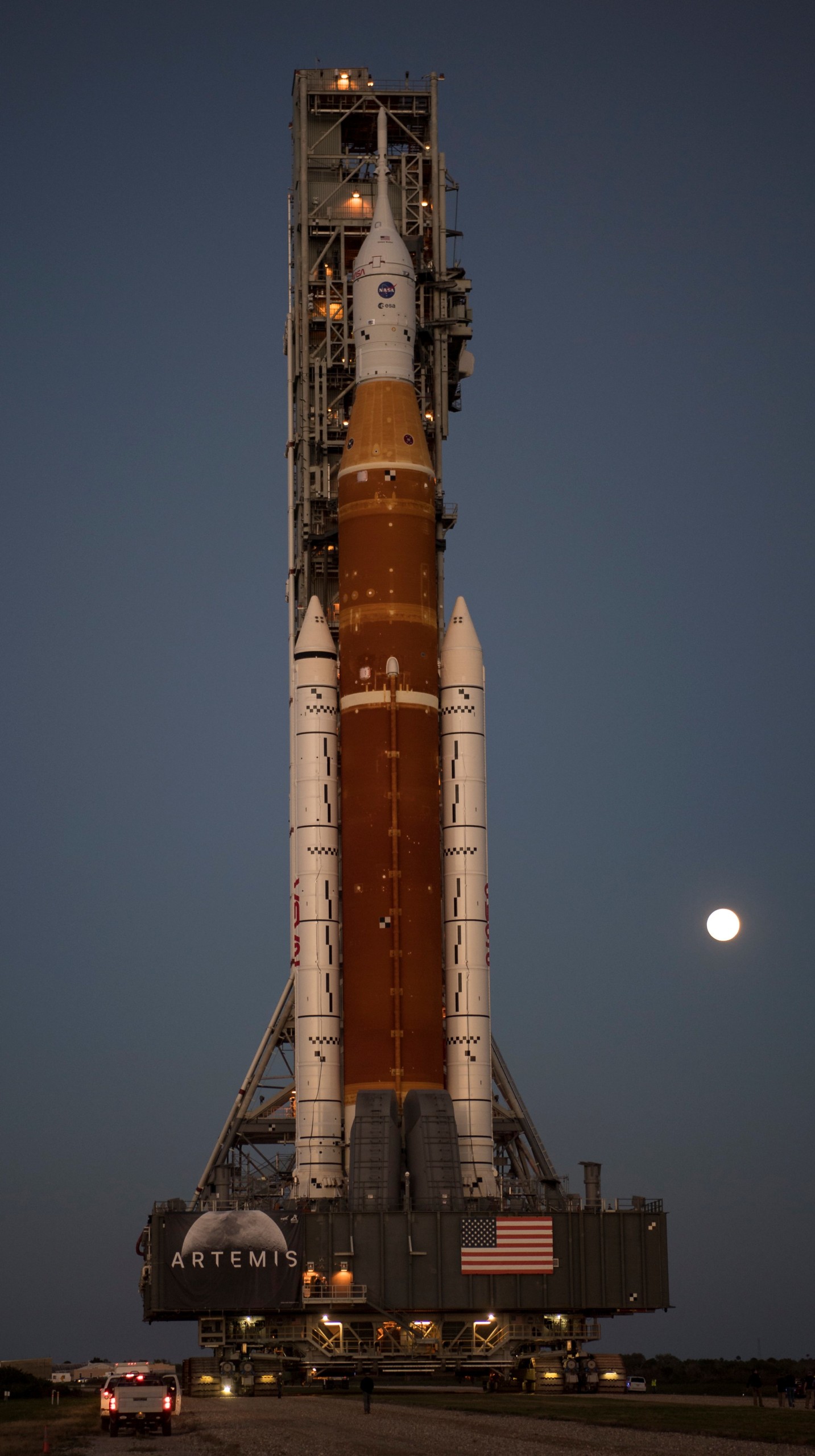 Image: Artemis 1 rolling out to the launch pad with its destination, the moon, in the background. Credit: NASA/Aubrey Gemignani

If the SLS looks like a big version of the Space Shuttle (minus the shuttle, or ‘Orbiter Vehicle’ of course) it’s because that’s pretty much what it is. The SLS is based off shuttle technology, using hydrogen and oxygen as fuel stored in the iconic orange tank, flanked by the furiously powerful solid rocket boosters, upgraded for the larger scope of SLS. The core stage engines are the same RS-25 engines that powered the shuttle. Not just the same type of engine, literally the same engines. They have been removed from the retired shuttles and repurposed for the SLS. The Orion capsule sits at the top of the rocket.

SLS has been designed to return people to the moon and then eventually carry missions to interplanetary space (read – Mars). These moon missions form the Artemis Program, named after the Greek goddess of the Moon and sister of Apollo. 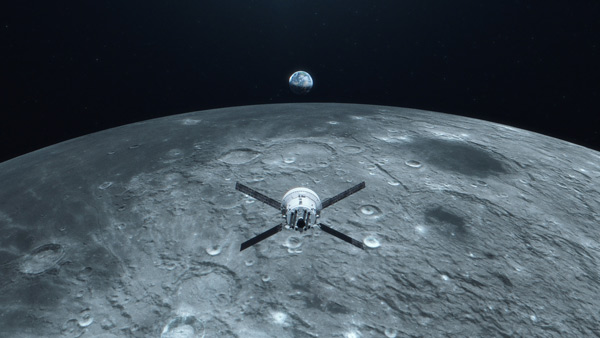 After an extensive and meticulous development process, in March this year NASA rolled out the SLS to the launch pad to conduct a wet dress rehearsal in preparation for its first launch. A wet dress rehearsal is the full preparation of the rocket, save for actually lighting the candle. Fuel and oxidiser are loaded on board and a full battery of tests is performed. Unfortunately, a persistent issue with the nitrogen supply from the launch tower caused the failure of the wet dress rehearsal. Nitrogen is useful as an inert gas to purge any plumbing lines safely before operations. NASA finally called off the rehearsal after several attempts. Artemis 1 has been rolled back into the Vehicle Assemble Building while repairs and upgrades are performed on the nitrogen supply.

SLS has been heavily criticised for its slow and expensive development as well as high cost of operations, with critics pointing to Starship as an alternative. SLS will not be reuseable, and each launch is estimated to cost of order $2 billion. If Starship can meet its design goals (and that’s a big if) of being fully reuseable and launching at a cost of only several million dollars per launch, literally a thousand times cheaper than SLS, then those criticisms may prove justified. Though it is well worth noting that SLS and Starship are designed to do very different tasks.

Interestingly, SLS and Starship are themselves only small parts in the much larger Moon to Mars project, a program of exploration and research involving returning people to the moon, the Gateway space station and eventually deep space exploration. We are still in the very early days of this program and have the future to look forward to.

Meanwhile in the Scitech planetarium

We cleaned the dome! The air conditioning system in the planetarium draws air out through ducts under the seats, and pumps cool air from pipes arranged above the dome. Over time this causes a build-up of dust on top of the screen which needs to be periodically cleaned off.

So ask yourself: just how do you clean the outside of a planetarium dome?

By calling on a professional climbing team to harness themselves to the catwalk above the dome and vacuum it from the outside. 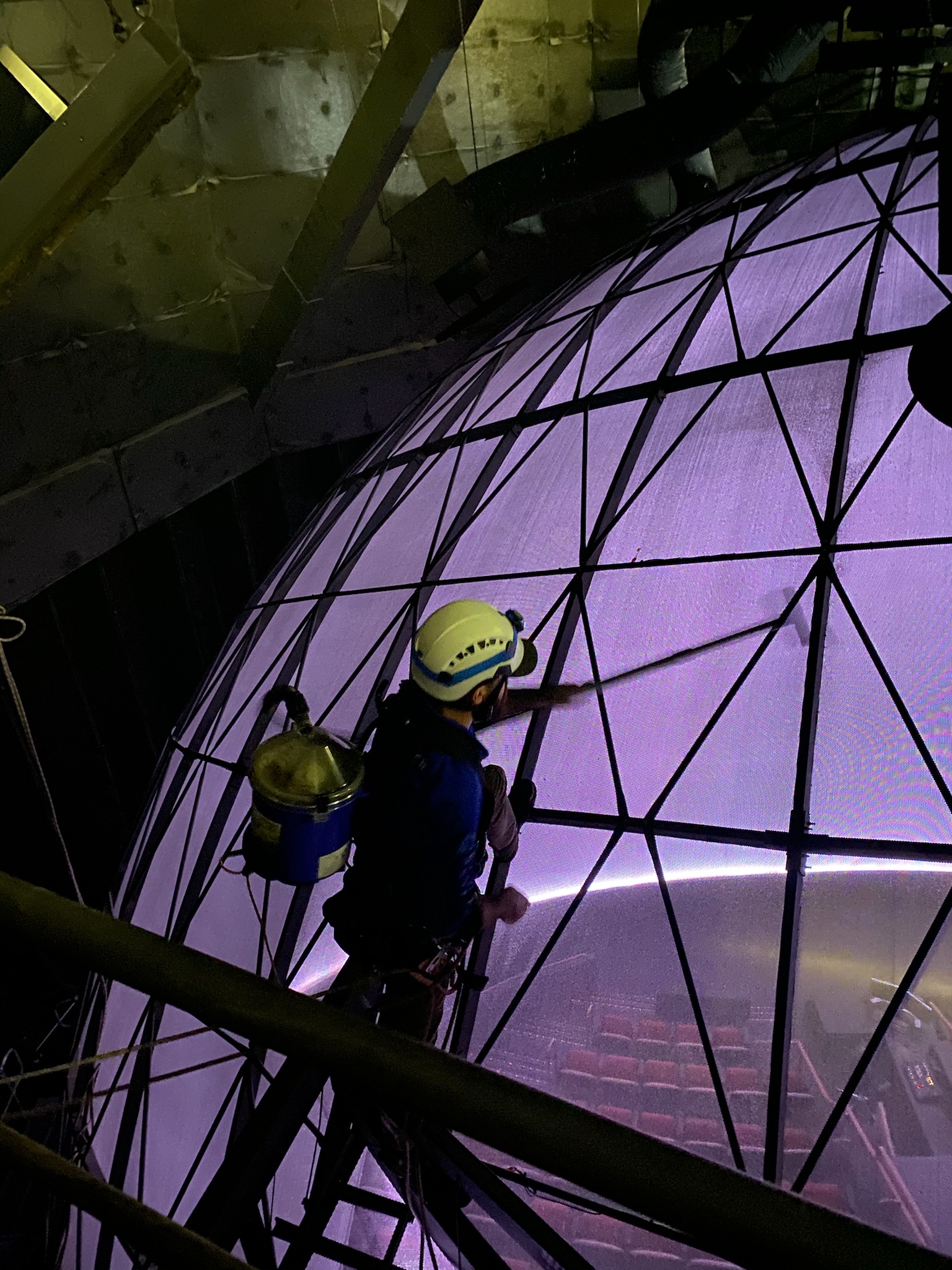 Image: I hope you’re good with heights. Those are the seats inside the theatre you can see down there.

Climbers from Skywalker Rope Access spent three days clambering over the dome to reach as many far flung ‘corners’ of the screen as possible. The result is a shiny clean dome.

SpaceX launched the Crew 4 mission to the International Space Station.

NASA will attempt to fully deploy the solar panels on the Lucy spacecraft.

The science instruments on the James Webb Space Telescope have all reached operational temperatures. Only the mirror remains to cool further.