There are five moon phases this month, with a Last Quarter Moon being seen on both the 1st and the 30th of November.

November is the month the famous Leonid meteor shower happens, but no storm event is expected this year, so don’t get too caught up in any social media hype that might circulate. At best you might only see a handful of meteors radiating out from the head of Leo, but it sometimes throws out spectacular fireballs nonetheless. The best time to be watching is from 2am to 4am (or whenever the sky gets too bright as morning twilight approaches) on the mornings of the 17th and 18th of November. This year these dates fall on a Saturday and Sunday, and with First Quarter Moon on the 16th it will be setting by the time the action starts, which means it will be easier to see the fainter meteors. If you’re really keen to try and catch a glimpse, face yourself towards the north east, where Leo is rising, and look up and around, and wait…

The evening sky is going through some rapid changes at the moment. Venus moved to the morning sky and Jupiter, the second brightest planet in the sky, will soon follow. If you don’t catch Jupiter in the first couple of days of November then that will probably be “it” for the biggest planet for the rest of year, as it sinks down into the evening twilight and changes over to the morning side of the Sun. By the time it rises high enough out of the Sun’s glare before dawn to be seen easily again it will be early 2019!

Mercury will be visible in the evening sky again this year during the first two weeks of November. On the evening of the 9th it will be close to Antares, the red star in the heart of Scorpius the Scorpion.

Saturn is also heading westwards, and will seem to race downwards as the days continue to lengthen and the sunset times push back, so its last looks for the ringed planet this month as well. Mars is still high, but falling behind us and so getting smaller in the telescope. The dust has settled from the global dust storm that covered it in June and July, and in moments of good seeing it might show you the white polar ice caps at either end of the planet.

Venus is now in the morning sky, rising a little earlier each morning. It will remain there all summer, so if you are an early riser that will be the bright object rising before the Sun. The Moon doesn’t pass near it this month, but Venus does slide past Spica, the brightest star in the constellation Virgo. They will be at their closest on the morning of November 15th.

Pisces is traditionally thought of as the twelfth or last sign of the Zodiac. It depicts two fishes tied together by a long rope. Why it looks like this is not clear, it could date back to the people of Mesopotamia, who held some fish sacred. Although it is large most of the stars that make out the constellation are faint and it may be hard to see from a light-polluted city environment.

The easiest part of Pisces to make is what is known as the Circlet, which marks the location of one of the fishes. Look for it above the Great Square of Pegasus. Once you have the circle of seven stars, trace out the rope to the brightest star in the constellation which is known as Alrescha (‘the cord’). The second piece of the rope heads down the east side of Pegasus and down between Andromeda and Aries you will find the second fish.

Today Pisces contains the point of the Vernal or March Equinox. This was an important event on ancient calendars as it marks the day that the sun crossed the celestial equator from the southern hemisphere to the northern and brought longer days and more warmth an so marked the start of Spring. It was also considered by some cultures to be the start of the year. During Roman times this occurred amongst the stars of Aries, but due to precession (caused by the wobble in the Earth’s axis) we now see it in Pisces. 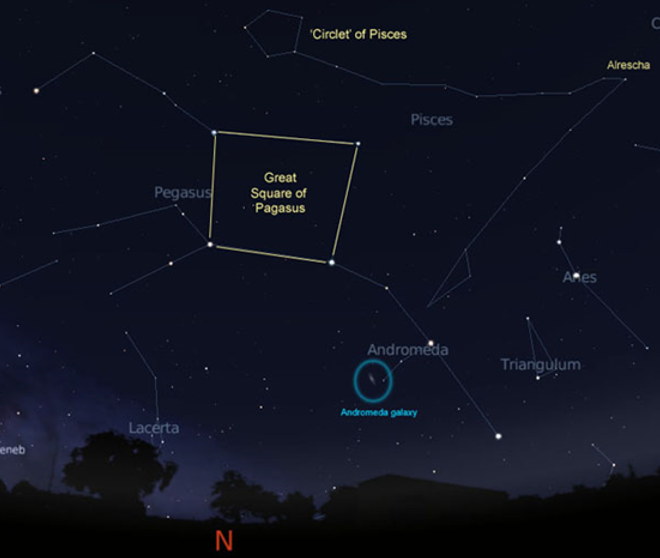 The Andromeda galaxy lies about 2.2 million light years away, making it one of the furthest objects that can be seen with the unaided eye. It is a huge spiral galaxy, with globular clusters and smaller satellite galaxies orbiting around it, much like our own Milky Way. It was in this galaxy that Edwin Hubble located some variable stars that allowed the distance of this galaxy from ourselves to be measured, leading the astronomers of the day realise that the universe we can see was larger than they thought.

From southern Australia the Andromeda galaxy doesn’t rise far above the northern horizon, so it never really gets high enough in the sky to show it off at its best (you will need to travel to the northern hemisphere to see that). It is also only visible for a few months of the year; from early morning times (e.g. 4am) in midwinter to early evening times in late November.

The great square of Pegasus will guide you towards its location – follow the curve of Andromeda down from the bottom right star of the square and a large fuzzy patch should appear in your binoculars. Because the galaxy is so large it spans a good area of sky and binoculars will likely provide the best view of the object. Telescopes tend to just show the central core of the galaxy itself.

Our atmosphere and the magnetic field that surrounds the Earth protects us from most radiation that comes from space. But random particles of high-energy gamma radiation, known as cosmic rays, do slip through from time to time. Because they are usually single particles of radiation, rather than concentrated areas, they are mostly harmless to us – unless you are a pilot or frequent flyer who travels over polar areas on a regular basis, then you are exposed to a much higher dose than normal.

Cosmic rays can be a hazard to space travellers, too, and that includes robotic spacecraft. Voyager 2 is thought to have encountered cosmic rays that have flipped its computer’s bits over at least once and more recently the Hayabusa2 space probe had a cosmic ray affect an image as it headed out to asteroid Ryugu, making it look like it might be a comet. But Hayabusa2 is orbiting Ryugu right now and we know that is definitely not the case!

It is a currently a mystery as to where cosmic rays come from, but possible sources include supernovae, black holes and pulsars. A new array of telescopes beginning to be built on La Palma in the Canary Islands and at the Paranal Observatory in Chile called the Cherenkov Telescope Array (CTA) hopes to solve this mystery.

The Cherenkov Telescope Array is named after Pavel Cherenkov, the Soviet scientist who first experimentally proved the existence of what we now call Cherenkov radiation, and won the 1958 Nobel Prize in Physics for it. If you are a fan of physics you may know this as the ghostly blue light emitted from underwater nuclear reactors. Cosmic rays emit the same radiation when they hit our atmosphere and split apart, forming a cascade of particles downwards.

Australia is one of 32 countries involved with building the array, so even though it isn’t in Australia, there will still be Australians involved with the project and studying the data.

For more about the CTA you can visit the website at www.cta-observatory.org 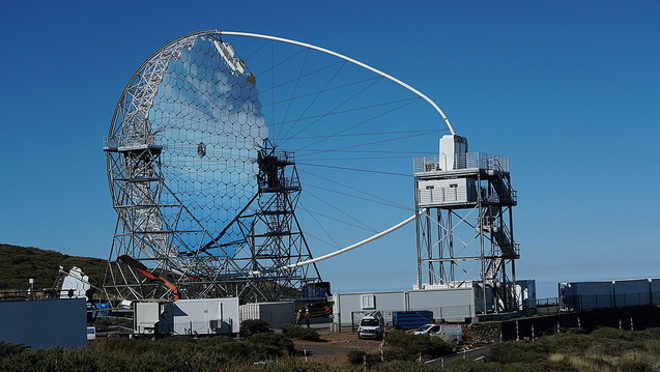 The first telescope in the array, LST-1 (Large-Sized Telescope-1), safely parked. It can be tilted up towards the sky to detect cosmic rays.