Saturday October 20th has been designated International Observe the Moon Night this year to encourage everyone to appreciate and increase their understanding of our moon. It’s at first quarter, so it will be easy to see in the evening sky. Information on a public activity near you can be found here or just enjoy the Moon from your own backyard.

It’s World Space Week during October 4th-10th. This year the theme is “Space Unites the World.” How does space unite you to the rest of the world?

If you are up in the early hours of the morning around the 21st of the October keep a watch for the Orionid meteor shower. At peak times you may see up to 20 bright meteors an hour streaking quickly through the sky (although it won’t be an even spread, they’re more likely to come in clusters). This year the Moon is at First Quarter just a few nights before maximum, so it will have set when the best of the action starts. The meteors that form this shower come from Comet Halley.

If you have trouble visualising how meteor showers work in 3D space, try this interactive tool at meteorshowers.org. Most of the major showers throughout the year are modelled and you can play with view by dragging the screen around with your mouse. You can also put yourself on “Earth” and see the shower from the planet’s perspective.

This month is your last chance to see Venus in the evening sky for 2018. It is about to “change sides” of the Sun to the morning sky as it pass through Inferior Conjunction – that is, between the Earth and the Sun. But you still have two weeks to see it. When it goes, it will dive down towards the Sun rapidly, as it catches up with us and passes us by.

As Venus goes down, Mercury is coming up. The two inner planets pass each other by on the evening of the 16th by a wide margin of six degrees. If you have a really good western horizon, though, you can look out for Mercury a few days earlier. On the 10th a one-day-old Moon will be to the right of Mercury, low down in the evening twilight.

Jupiter is also sinking into the west, but it won’t get to meet up with Venus before it drops away. It will cross paths with Mercury, though, and the two planets will be three degrees apart on the evening of the 28th. If you haven’t seen Mercury before this will be an excellent opportunity for you to identify the innermost planet with bright Jupiter to guide you.

Saturn and Mars are still up in the evening sky as well, but well away from the action near the western horizon. Saturn is high overhead as darkness falls, still near the Teapot asterism of Sagittarius. Mars, though fading after opposition, is still bright, and is now moving through the stars of Capricornus. It sets in the early morning.

This leaves the dawn sky empty of planets during October, but November will see the return of Venus to the morning sky, where it will remain during the summer months.

To the south of the fishhook tail of Scorpius lies a small but bright constellation that dates back to ancient Greek times, known as Ara, the Altar. It represents an altar that the Greek gods of Olympus swore an oath of allegiance at before their war with the Titans. The misty star clouds of the Milky Way that run through this area of sky is the smoke from the burning incense and offerings on the altar.

It has a nearly symmetrical shape that evokes different reactions from different people. You might see it as an open book, or a butterfly, or…?

The only star in the constellation that has a proper name was named very recently, in 2015. Mu (m) Arae is also known as Cervantes, in honour of the author of the famous novel “Don Quixote.” The four exoplanets that circle this star are named after characters from the book. This was done as part of a public naming competition to begin naming the many exoplanets that have been found with proper names and the stars they circle, rather than catalogue numbers. 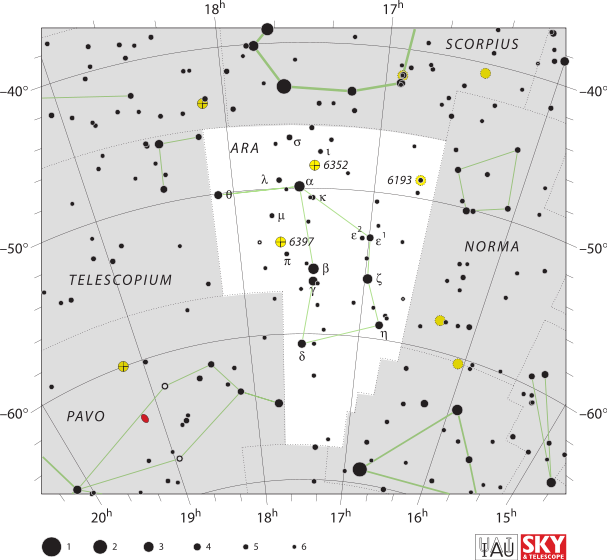 Being close to the galactic centre Ara has several bright globular clusters within its boundaries. Globular clusters are rounded balls of very old stars, as old as the galaxies themselves, which are kind of like left over bits from when the galaxies formed. They can be seen forming halos around the central bulges of other galaxies, and we can see at least 120 of these special star cluster from our vantage point on Earth.

One of the closest globular clusters to us is NGC 6397, in Ara. It’s distance is not certain, but it is between 6,500 to 10,000 light years away. That helps to make it one of the bigger and brighter globular clusters in the sky. It’s easily seen in binoculars, just to the south of mu Arae (see the chart above), and if you happen to be in a dark location on a moonless night, you may just even spot it as a bright fuzzy patch with the unaided eye.

The big year of space missions continues as the European Space Agency (ESA) and the Japanese Space Agency (JAXA) prepare to launch a joint mission to Mercury on October 19th. Called BepiColumbo, after an Italian professor of the 20th century who pioneered the use of gravity-assisted fly-by manoeuvres for spacecraft.

It’s well named, as it will take nine planetary fly-bys to settle into its final orbit around Mercury in 2025 – once around Earth, twice around Venus and six times around Mercury! This is because it must both decelerate against the Sun’s gravitational pull and slowly twist itself up into a polar orbit, perpendicular to the plane of the solar system. Once there, it will study the magnetosphere of Mercury, and it’s surface and interior, adding to our knowledge from Mariner 10 in 1974 and Mercury Messenger in 2011. 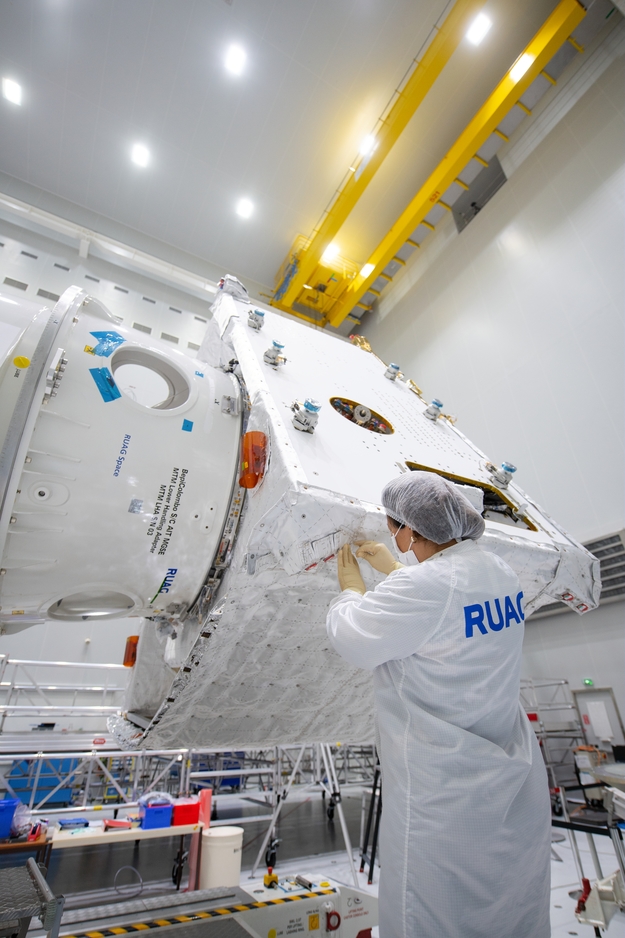 Hand-sewing of the insulation blankets on ESA’s Mercury Transfer Module (MTM) taking place. The insulation is to protect the spacecraft from the extreme thermal conditions that will be experienced during the mission.