If you are up in the early hours of the morning around the 21st of the October keep a watch for the Orionid meteor shower. At peak times you may see up to 20 bright meteors an hour streaking quickly through the sky (although it won’t be an even spread, they’re more likely to come in clusters). This year the Moon is only a few days past new, so won’t interfere with your early morning observing. The meteors that form this shower come from Comet Halley.

If you would like some new bling for your computer or phone, NASA has just released a new poster and wallpaper (computer and mobile phone) for its Europa Clipper mission to the famous moon of Jupiter. It is due to launch sometime in the mid 2020’s and will orbit Europa and study the ocean under its icy crust. 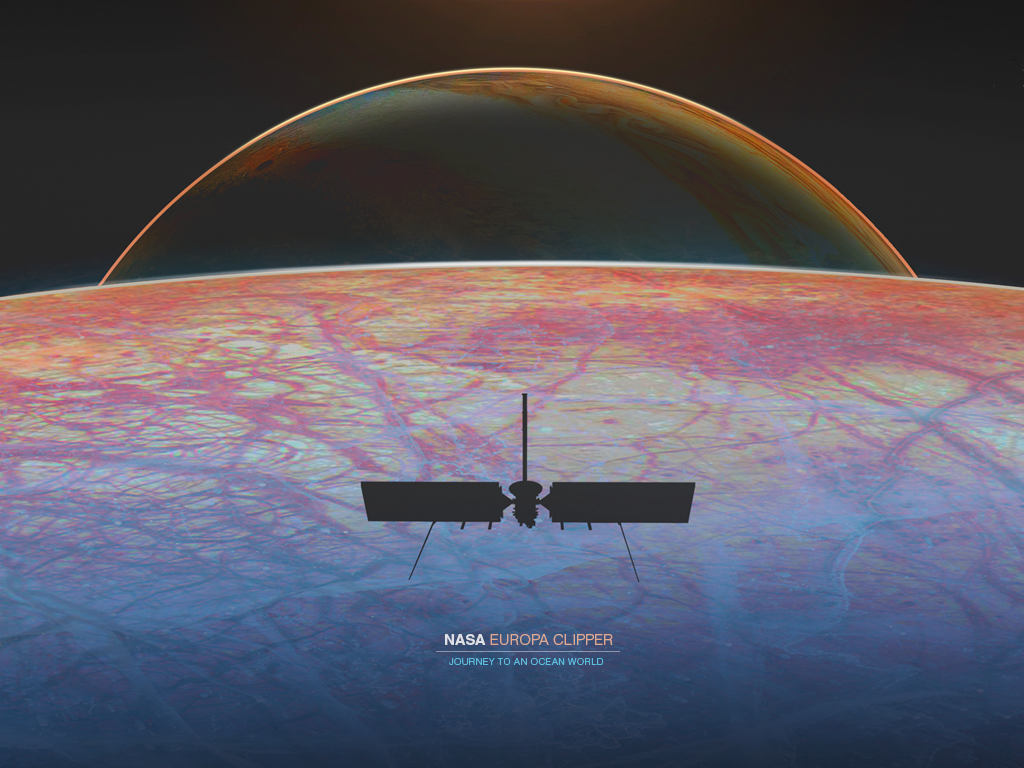 Mercury is still visible in the evening sky during the first two weeks of October. After that, it quickly dives down towards the Sun and the morning sky. If you’d like to see the innermost planet then make the effort during those evening weeks as Mercury will be a challenge to see for the rest of 2020.

Jupiter and Saturn are now overhead as the Sun goes down, and heading westwards themselves as the evening progresses. But October 2020 belongs to Mars, as it reaches its once in two years opposition to the Sun from Earth, and appears the largest and brightest it will be in the sky until late 2022. It is nearest to Earth on the 7th of October, and at opposition on the 14th, so getting out to observe it any time around mid-October will be rewarded. Look for it rising in the northeast. The longer you can wait for it to climb above the horizon, the better, as there will be less atmosphere to look through. It is late summer on Mars, so the southern pole is still tilted towards us. 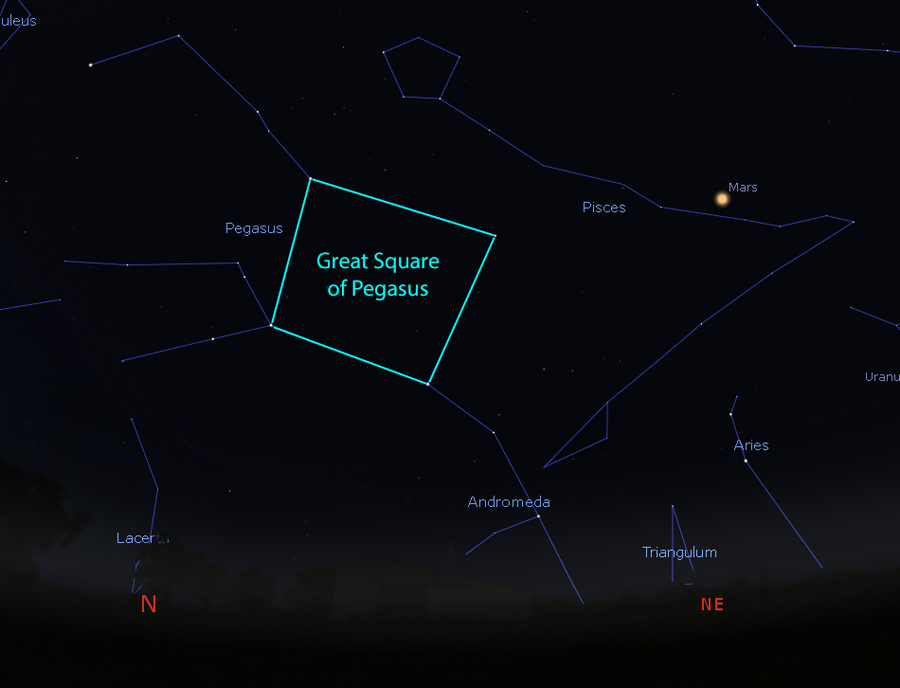 Look to the northeast to find Mars in Pisces on the night of opposition Oct 14th. To the left is the asterism known as the Great Square of Pegasus.

Venus meets the star Regulus in Leo on the morning of the 3rd of October. The two will be only 0.2 of a degree apart – that’s about one-third the width of a full moon. Venus will then slide on to the south, following the Sun and the ecliptic. A waning crescent Moon joins it on the dawn of the 14th of October.

Late in the year as you look to the south of where Sagittarius and Scorpius are setting you might notice a couple of bright stars sitting out on their own. The brightest one is called Fomalhaut, which sounds like an odd name, but comes from the Arabic for “mouth of the fish” (fam al-hut.) It does the mark the mouth of a fish, the Southern Fish, Piscis Austrinis, the last of Ptolemy’s ancient 48 constellations, and Fomalhaut marks where the water pouring from the jug of Aquarius ends up – being swallowed by a giant celestial fish! Fomalhaut is the 18th brightest star in the sky.

To north of Piscis Austrinis is Capricorn, and to the south is Grüs the Crane (pronounced “groos”), easily identifiable by the pairs of stairs in his neck and the star Alnair, meaning “The Bright One” on his spread wingtip. 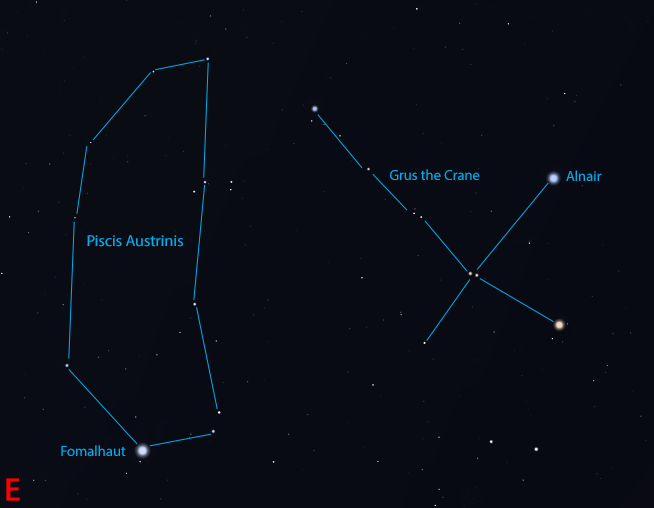 Near the sting of Scorpius there are two relatively large open clusters of stars that can be seen.  If the sky is dark enough you can even see them with the unaided eye.  The larger of the two is known as Messier 7 (or M7 for short) and the smaller one is Messier 6 (M6).

Charles Messier was a French astronomer who lived from 1730 to 1817 and was famous for finding many comets.  As he searched the sky he began to make a list of objects he saw again and again that looked like comets but weren’t.  We must remember that the telescopes of that time weren’t as big as the ones we use today, or of as good a quality and a lot of things in the sky looked like fuzzy comets!  He eventually listed over 100 objects and because they are relatively bright they make a good introduction to what is known as the deep sky to people who a new to using telescopes and are learning to find their way around the night sky.

An open cluster of stars is a loose group of stars that formed together at the same time out of the same cloud of dust and gas.  When you look at M6 you see several other open clusters nearby – this is because you are looking towards the centre of our galaxy the Milky Way, where there is a lot of star forming activity.  M6 lies about 1600 light years away.

M6 is a cluster of mostly hot blue stars.  Look carefully for the butterfly shape – you might need a bit of imagination to see it!

You won’t need much magnification to see this cluster, so give it a go with binoculars, too. 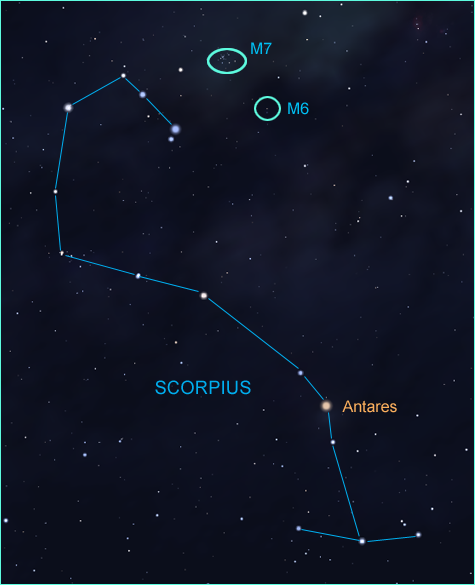 The OSIRIS-REx spacecraft has been orbiting the small asteroid named Bennu for some time now, mapping and studying its surface, looking a good place to take samples. It’s finally ready to make the first of three sampling touch-downs on October 20th. After three attempts have been made, the spacecraft will fly back to Earth with its samples, returning with them in 2023. (The Japanese spacecraft Hayabusa2 has been involved with a similar mission at another asteroid, Ryugu, and will return its sample to Earth over Woomera in South Australia on December 6th.)

Asteroid Bennu has already revealed two surprises, the first being the sight of bits of rock being released from its surface as it travels through space, and the second being the discovery of bits of another asteroid, Vesta, on its surface. Astronomers determined it was from Vesta because the shiny rocks (in the images below) had a high amount of pyroxene in them, a mineral that forms under high heat and pressure, both things that are found in collisions. 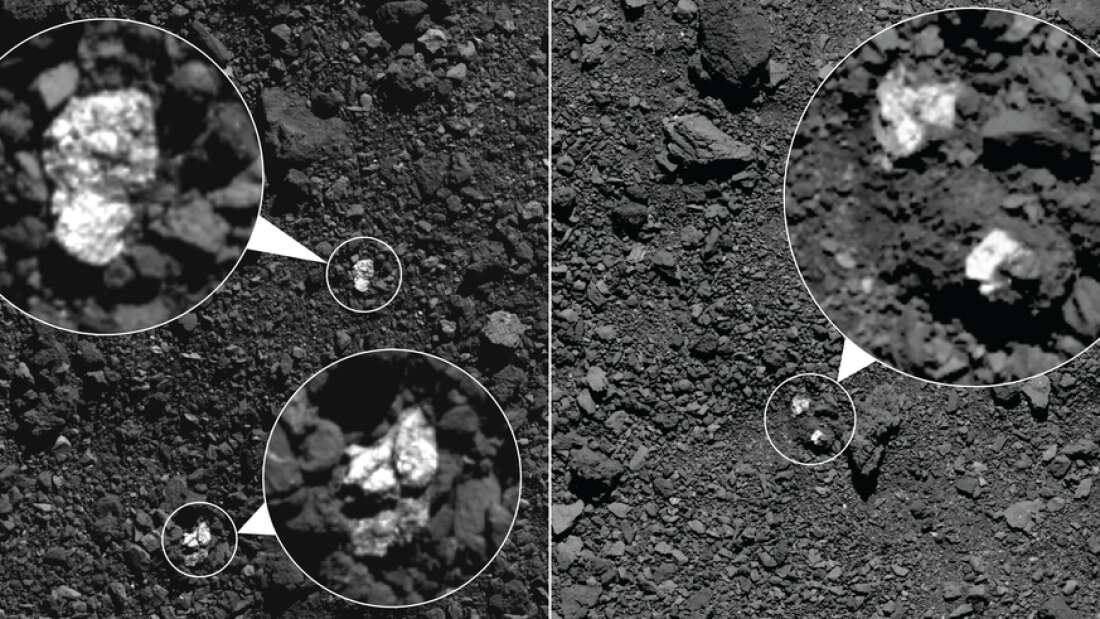 The shiny lumps of pyroxene from Vesta contrast stand out against the dark surface of Bennu.

How do we know Vesta has pyroxene? Because bits of Vesta have also been found on Earth! Vesta, one of the largest main belt asteroids, was hit by something big between one to two billion years ago. This formed a large crater on it and covered it in fresh material, making it the brightest asteroid in the main asteroid belt. Astronomers knew we had meteorites from Vesta even before the Dawn spacecraft visited there in 2011. Dawn spent a year orbiting Vesta before it travelled on to Ceres. It made a complete map of Vesta and studied what it was made of. From this the story of Vesta could be told. 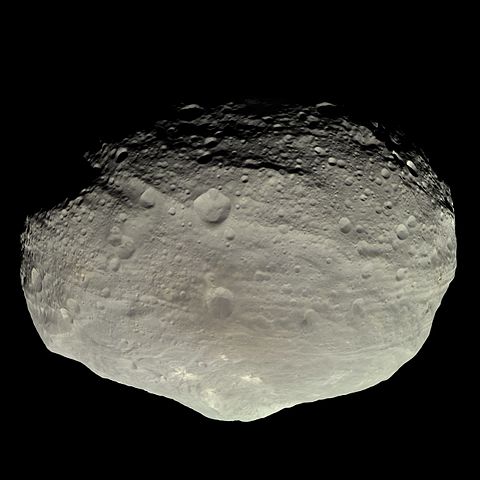 Vesta as imaged by the Dawn spacecraft. The huge impact crater is on the bottom of the asteroid in this image.

Until the samples are returned to Earth by OSIRIS-REx we won’t know the full story of Bennu. The discovery of the pyroxene could mean that Bennu is the result of a chunk of Vesta colliding with another asteroid – an asteroid meld. Or perhaps there is another story altogether waiting to be discovered.