The milky way is sitting above the western horizon in the early evenings making for some nice after-sunset viewing of Scorpius, with red Antares to guide the way. The moon is also nearby in the early days of the month as it climbs into first quarter. 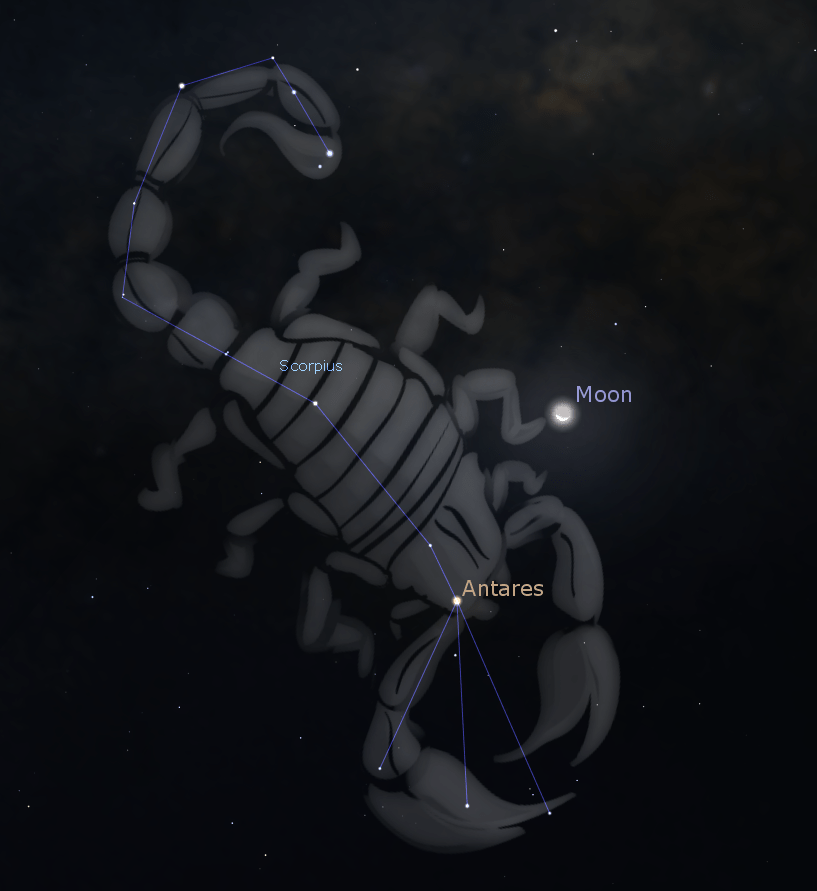 Image: Scorpius and the moon backdropped by the milky way in the early days of the month

Jupiter passed opposition on September 26, meaning it is around its closest distance to Earth this year and makes for great viewing all night, starting in the eastern sky after sunset.

The Orionids meteor shower peaks on Oct 21/22. This shower is so named because its meteors appear to emanate from inside the constellation of Orion. Conveniently, the red triple of Mars, Aldebaran and Betelgeuse provide a nice accompaniment to the whole affair. 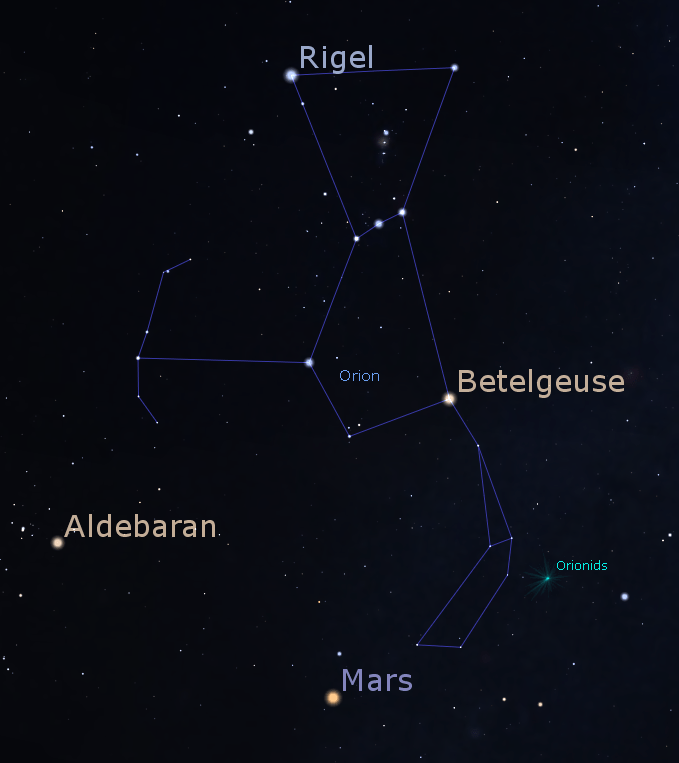 Image: Location of the radiant of the Orionids shower.

It is interesting to think about the distances involved: meteors typically occur about 60km above you, Mars is about 1AU away, Aldebaran is 65 light years away and Betelgeuse rounds it out at about 640 light years.

You might expect to see 10-20 meteors an hour in good conditions, though this count has varied by quite a bit over the years. Interestingly these meteors were once part of Halley’s comet and the shower occurs as the Earth sweeps through the dusty tail of where the comet once passed, kind of a bug-on-the-windscreen effect. The best time to go looking is in the hour or two after midnight before the moon rises, though it thankfully is in its waning phase when it does appear.

Saturn is visible from after sunset until the early hours of the morning. The planet is approaching quadrature, meaning if you point one arm at the sun and the other one at Saturn, they almost form a right angle. Not quite yet though, that will happen on Nov 11.

While we’re on the topic of pointing at things, Jupiter reached opposition on Sep 26, meaning if you point one hand at the sun and the other at Jupiter you are pointing in exactly opposite directions, hence the terminology. A corollary of this is that Jupiter is rising as the sun sets, so is visible all night and makes for excellent viewing. Jupiter is always bright at conjunction, though you might have heard that this conjunction is the closest Earth and Jupiter have been for 60 years, which adds a few more percentage points to its brightness.

Image: Jupiter appears in the east as soon as the sun sinks below the west, while Saturn is ready and waiting.

Mars makes an appearance in the east at about midnight and is best served alongside a few Orionids meteors.

Hydrus is a small constellation in the far southern skies visible all year round in Australia. With its brightest star Beta Hydri only magnitude 2.8, this faint constellation can be located more easily by finding bright Achernar (of Eridanus) nearby. 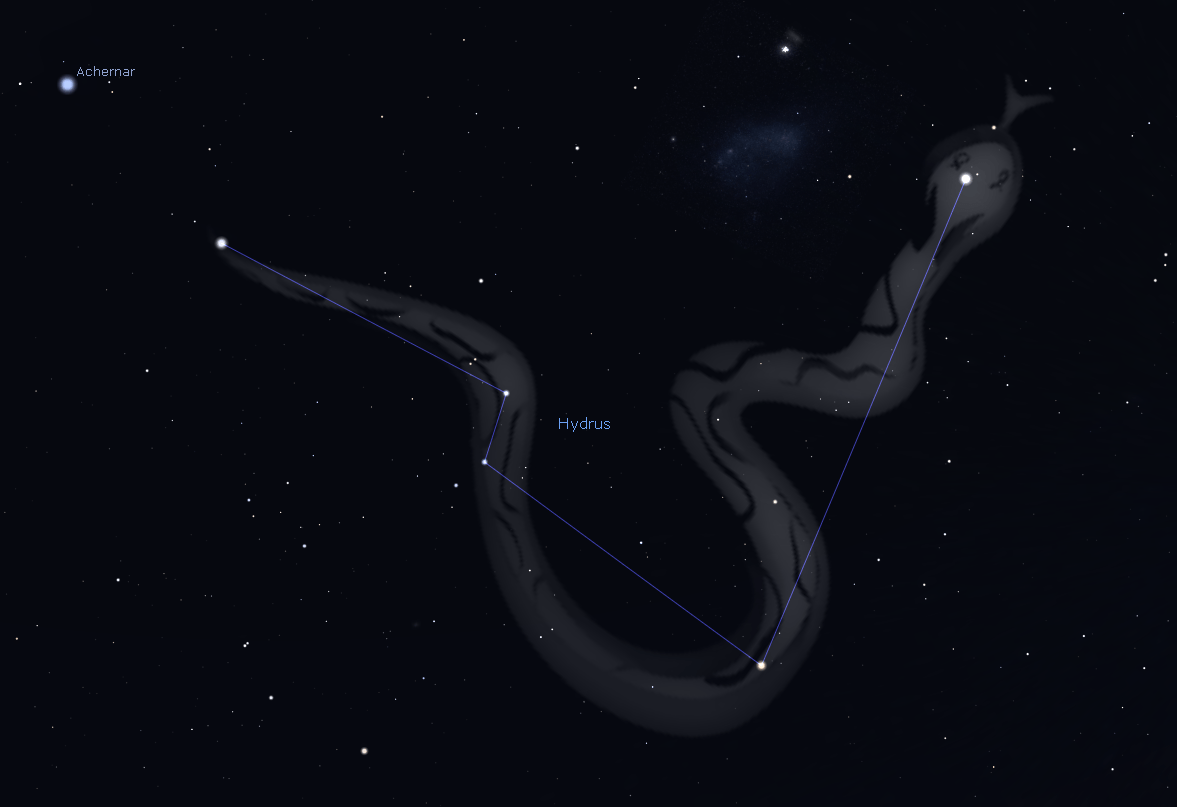 Beta Hydri offers a snapshot of what the sun will look like in a few billion years. As stars fuse hydrogen into helium in their core, over time the hydrogen is depleted and the core pressure increases, accelerating the rate of fusion. This higher rate of energy production increases the temperature and thus causes stars to get larger and brighter as they age and Beta Hydri is an example of a subgiant star in the stages of expanding before becoming a full fledged giant star.

Hydrus also contains the fascinating solar system HD10180 which may have up to nine planets in it. Like many exo-solar systems this one is a much smaller than our own, with the closest planet to its star – the Earth-sized HD10180b – orbiting a mere 3 million km from its sun. The other planets appear to be a collection of hot gas giants of order Neptune to Jupiter in size and the system is a topic of active research.

The Small Magellanic Cloud spills over from Tucana into Hydrus.

Big, bright and unmissable in the night sky. The discovery/rediscovery of a lost moon in 2021 brought Jupiter’s tally of known moons to 80, several of which are visible through a modest telescope.

NASA’s Juno spacecraft did a close flyby of Europa on September 29, revealing rugged troughs and ridges as well as a possible impact crater.

Even the James Webb Space Telescope is getting in on the action, taking this image in late August showing, amongst other things, the ghostly rings of the planet. 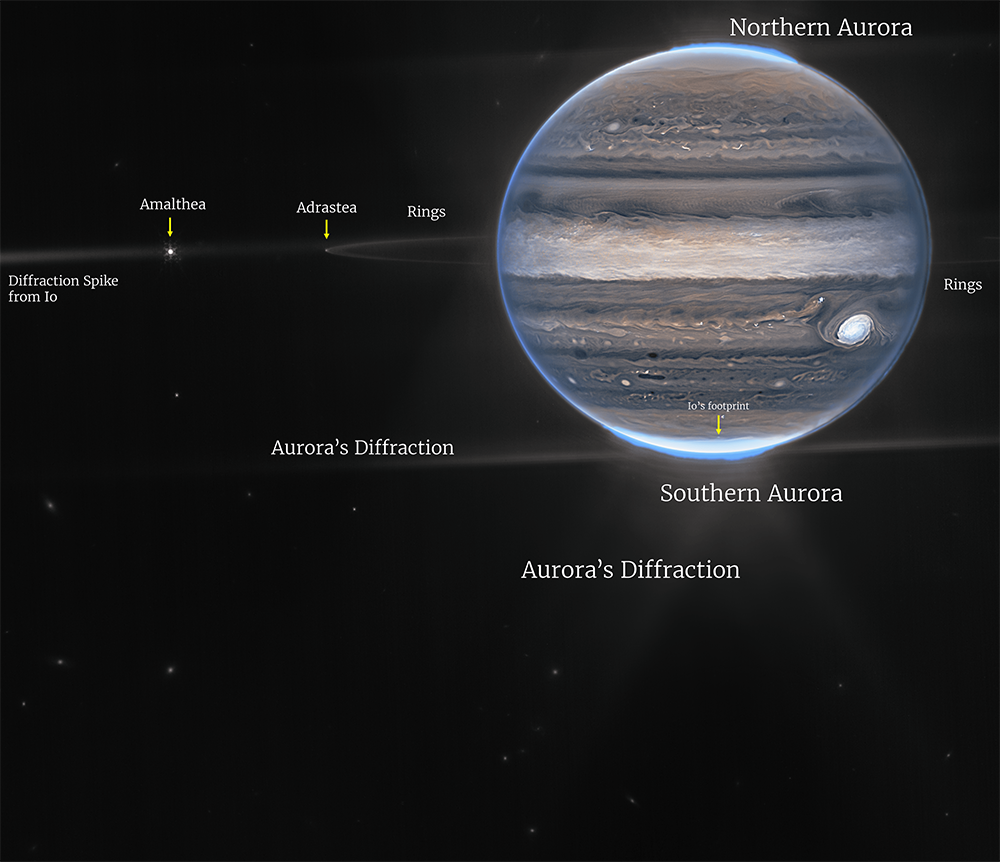 The Double Asteroid Redirection Test reached peak excitement on September 26 as the 600kg spacecraft slammed into the asteroid Dimorphous at about 6km/s, providing stunning video footage the entire way. 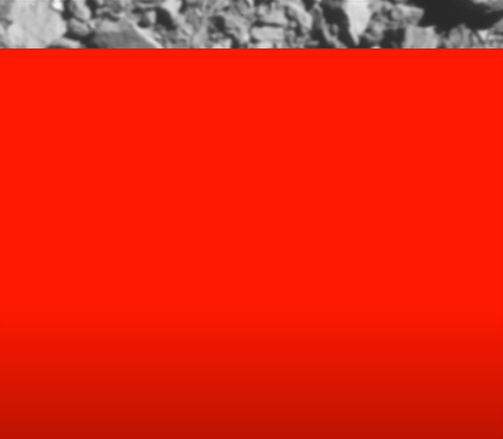 Image: Pour one out for the last frame of footage that hadn’t finished transmitting before the impact!

Dimorphous is the smaller part of the Didymos-Dimorphous double asteroid system, orbiting the larger body like a moon, and hence is sometimes called Didymoon.

The purpose of the mission is to see if a deliberate impact of a spacecraft into an asteroid can measurably alter its orbit, a question that NASA planetary defence takes very seriously. We’re all familiar with the end-of-the-world stories where humanity is saved from the asteroid barrelling toward us by the gentle nudge of a spacecraft to push it off course. It’s a great trope in a movie, but would it work in real life?

Video: This one’s for the dinosaurs!

It is worth mentioning that the Didymos asteroid system has no chance of hitting Earth, this is just for science.

Rather than trying to push the 800m wide Didymos off course, the verification of which would require very precise measurements of position over several years, the experiment aims to try to push the smaller 160m wide Dimorphous into a closer orbit around Didymos. The head-on collision, against the direction of the Dimorphous’s motion, should cause it lose momentum and fall into a tighter orbit around its parent, meaning that the duration of the orbit should decrease, something quite easy to measure.

The collision was also watched by ground-based telescopes, with a spectacular plume of ejected material visible after the impact.

ATLAS observations of the DART spacecraft impact at Didymos! pic.twitter.com/26IKwB9VSo

Video: The (unresolved) binary asteroid (centre) and the expanding ejecta cloud after impact.

Asteroid redirection is a topic of serious thought. Despite the appeal, it has been shown that Bruce Willis could not save us from an Armageddon style asteroid, so most of the energy is concentrated on early detection. If an asteroid on a collision course with Earth is detected far enough in advance, it is argued that an impacting spacecraft could alter the velocity of the asteroid, even only by a few mm/s, which with enough forewarning would add up to a planet saving amount of deflection. That’s the theory, DART is putting it to the test.

NASA’s CAPSTONE mission has been having some troubles.

It’s crew changeover time on the ISS with a Soyuz launch and an upcoming SpaceX launch.

Starship engine tests continue with a seven-engine static fire. Twenty-six more engines to go and there will be lift off.

The coming of September welcomes the beginning of Spring so it is warmer days from here on out. Fittingly, September brings …