On the evening of Sunday 8th September Saturn will be occulted (hidden) by the Moon for all WA and NT observers. An occultation is when one celestial body hides another. Far north Qld will also get to see this event, but NSW and VIC will miss out (again!) As the Sun sets you will notice the Moon will be very close to Saturn. For Perth observers Saturn will slip behind the dark limb of the Moon just after 10pm, with Titan, its largest moon, following two minutes later. It will re-emerge from behind the bright limb an hour later, at 11.03pm. Times may vary depending on where you are located, however. These events are a little tricky to image, as to get the Moon exposure right, Saturn might look a bit dim, but to get Saturn and Titan looking bright, the Moon might be over-exposed. Some imagers solve this by taking two different exposures and combining them. Have fun observing the event anyway! 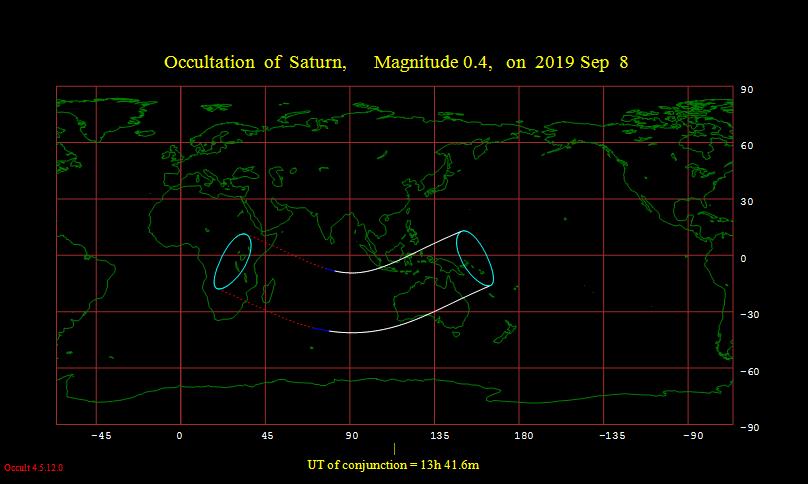 A map showing the path of visibility for the occultation of Saturn on 8th September. The area in the dotted red line (over Madagascar) indicates the event is happening while the Sun is above the horizon.

There are really only two planets to talk about this September, Jupiter and Saturn. The other three planets, Mars, Venus and Mercury, spend most of the month hidden in the Sun’s glare, although Mercury does climb out of the evening twilight right at the end. It will be a feature of October’s evening skies. Perhaps those with good western horizons might start to see Venus make its return to the evening skies as well.

But here in September it’s mainly Jupiter and Saturn, both high in the sky once it gets dark. Jupiter is right overhead now, making it a bit of a stretch for some telescopes that don’t like looking straight up. But it’s also a prime viewing position if you can get past the awkwardness. It’s now setting around midnight.

Saturn is behind it, not as bright, but still brighter than the stars around it. It will disappear behind the Moon for an hour on the evening of 8th September (see above).

The morning sky is empty of planets this month. On to October!

Lyra is one of the ancient constellations and is said to represent the lyre of Orpheus in Greek mythology. A lyre was a stringed instrument, like a small harp but symmetrical in shape, that was said to have been invented by the god Hermes (known to the Romans as Mercury). Australians see Lyra in the northern part of the sky, so look northwards about a third of the way up into the sky and you should be able to locate it easily.

Lyra contains the 5th brightest star in the sky, known today as Vega. It was once much closer to the celestial north pole and around 14,000 years ago would have looked as if it was circling around and around the pole in the sky at about four degrees distance (about seven moon-widths). Eagles and vultures do much the same in the sky, circling effortlessly in thermals of air, so the meaning of Vega’s name, which is often given as “The Swooping One” or “The Swooping Eagle”, probably originated from this time, although the form of the name we now use comes from the Arabic name for this star, “Al Wega.” Because of precession – the wobble in the Earth axis – it is now some distance from the pole.

Near to Vega is a parallelogram of fainter stars which mark the strings of the Lyre. If you can find them along with Vega you have the main pattern of this constellation in the sky. 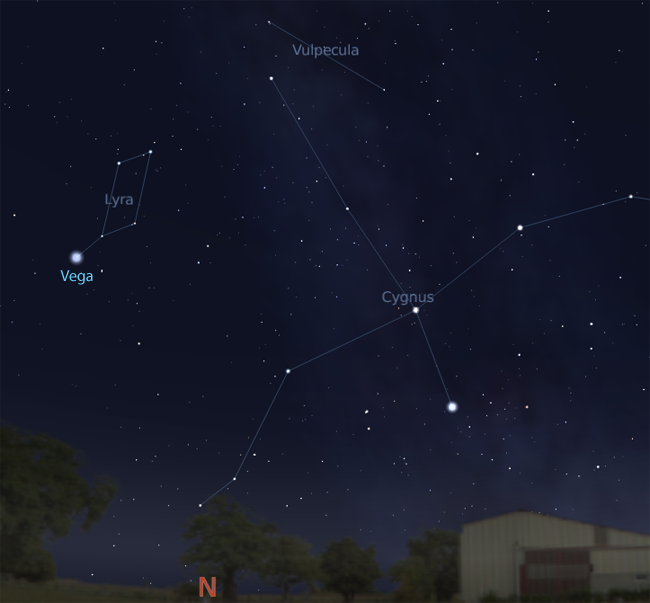 Look to the north to find Lyra – the bright star Vega is to the lower left of the ‘strings’ of the Lyre. You may also see large constellation of Cygnus the Swan to the right.

The Dumbbell nebula is found in the constellation of Vulpecula the Fox, which lies in the northern part of the sky as seen from Australia. It is an excellent example of a planetary nebula, a huge shell of dust and gas thrown off by a dying star about the same mass as our own Sun. The Dumbbell nebula, also known as Messier 27 (M27) or NGC 6853, is relatively close to us, only 1000 light years away, so it appears to take up about the same size as a quarter of the Moon in the sky and is bright enough that it might even appear to look green in your telescope. You will need to look on a moonless night, though. 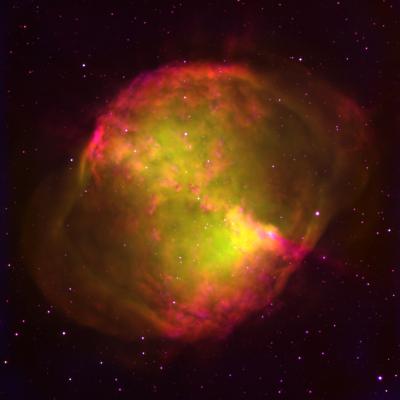 To find the Dumbbell nebula, look northwards for Sagitta the Arrow, which is below the bright star Altair, in Aquila the Eagle. If you find Alberio, a lovely double star at the top of Cygnus with blue and orange colours, you’ve gone too far. 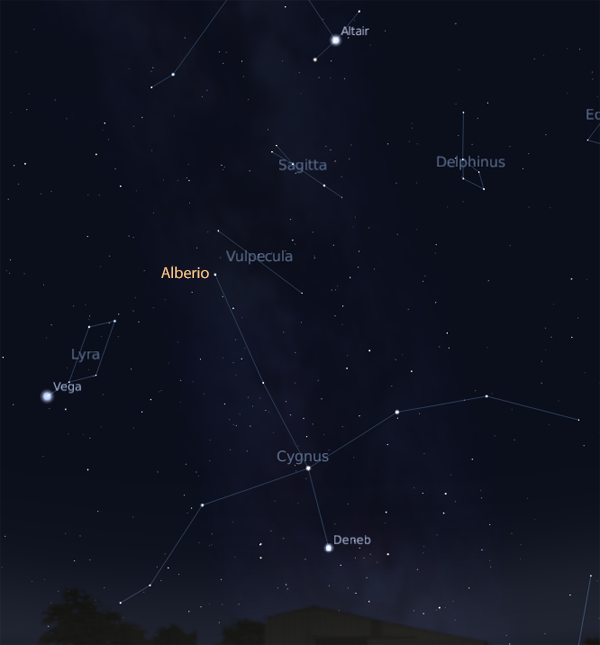 If you find a cluster of stars that looks like a coathanger you’re not too far away! This is known as Brocchi’s cluster, which we’ve featured here in the past. Just move a little bit further east, below gamma Sagittae, as marked on the chart below. 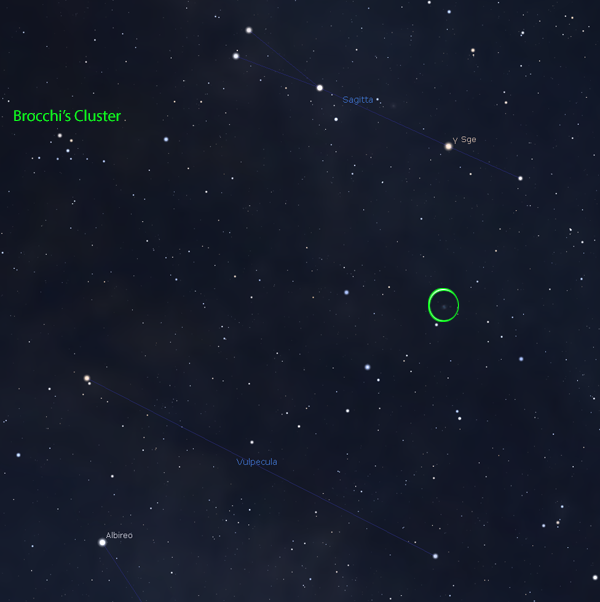 The Dumbbell nebula is found within the green circle.

Name a Star and Exoplanet!

As part of the International Astronomical Union’s (IAU) 100th Anniversary celebrations they are giving every country in the world a star and it’s exoplanet to name. All the worlds are similar in size and type – about Saturn-sized gas worlds, that may have moons.

Australia’s exoplanet around the star HD 38283 was found by an Australian in 2016. It’s about 125 light years away, in the constellation Mensa. Mensa is the shortened form of Mons Mensa, as this constellation represents Table Mountain, at the Cape of Good Hope at the southern tip of Africa. It is often seen with a cloud atop it, and this is what the Large Magellanic Cloud is supposed to represent here, of which half of this satellite galaxy can be found within the constellations borders.

However, it is also the International Year of Indigenous Languages, and the Australian Exoplanet Naming Committee would like you to consider names from one of the many Australian Indigenous languages across our land that meet the theme of “meeting place.” A theme is needed in case more exoplanets are found around this star in the future, and those planets can be named along the lines of the chosen theme.

But be careful with your name choices, and don’t be silly – there are rules! You can’t name them after yourself or people you know, or people who are recently deceased. You can’t make a name up, it has to be an already existing word. You can’t use trademarked names. You can’t use names with numbers in them, so no Earth 2.0, sorry. And you can’t use names that have already been used for objects in the sky, so you might need to check the long list of moons and asteroid names in use.

The full list of rules and the submission form can be found at the Name-Exoplanet website here: name-exoplanet.net.au  You have until September 15th to submit your suggestions. A short list will be prepared for voting in November and the winning name will be announced in December. 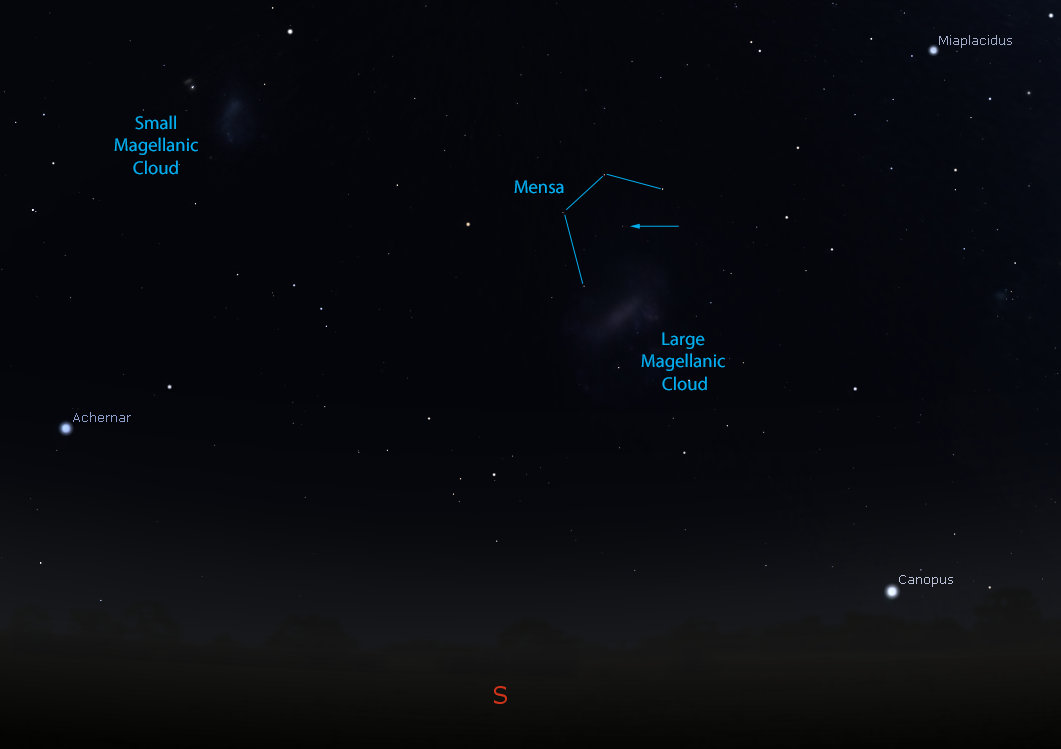 The location of the star HD 38283 in Mensa, the star all of Australia has a chance to name this year.