The Equinox occurs on the 22nd of September this year. After this day southern hemisphere observers will have more daylight than night time for the next six months. Summer is on the way!

Mars goes retrograde on September 10th. This doesn’t mean it’s going to go lime green and psychedelic pink while breaking out into disco moves, it means the Earth is going to overtake it on its closer orbit to the Sun and make Mars look it’s going backwards, or retrograde, in the sky. Normal forward motion, or prograde motion, is when the planets and our Moon are travelling eastwards amongst the stars. Mars’ retrograde loop will continue until November before it stops and turns prograde once more. 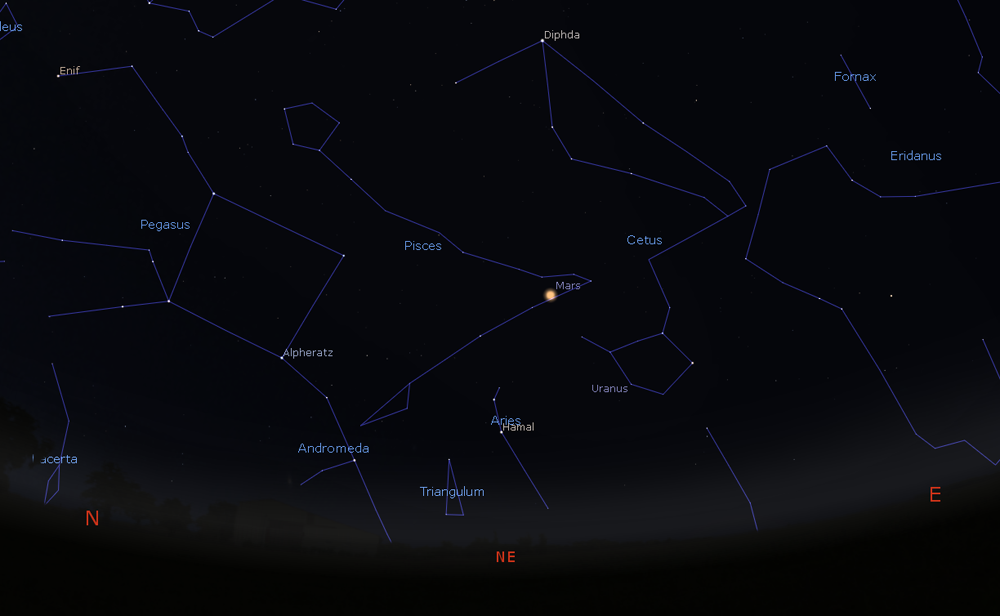 The position of Mars as you look northeast at midnight on 10th September 2020. It will stand out brightly among the surrounding stars.

Mercury makes its best evening appearance for 2020 during September and the first few weeks of October. It is visible all month in the evening sky. The slender crescent of new Moon makes a triangle with Mercury and Spica, the brightest star in Virgo, on the evening of the 19th, then Mercury moves up to be only 0.3 of a degree away from Spica on the 22nd. 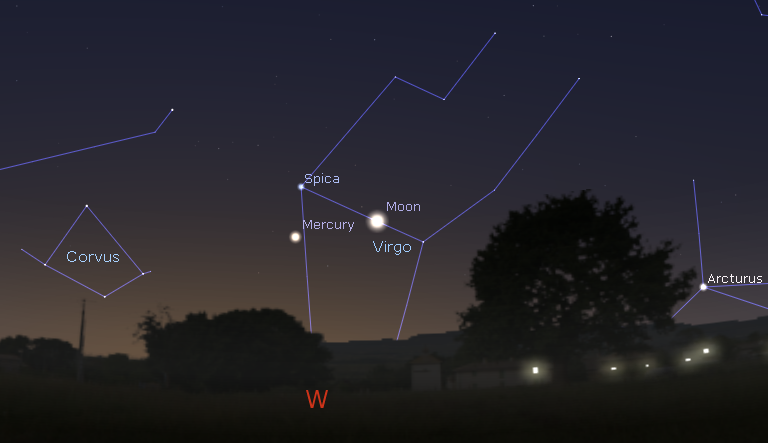 The Moon will make the right-hand point of a triangle with Mercury and Spica on the evening of 19th September.

A few nights later the waxing Moon is right next to Jupiter, which should also be an eye-catching sight. Saturn will be above them to the right, as they all head downwards towards the western horizon.

Mars is now rising mid-evening in the northeast, brightening steadily as it heads towards opposition in October. It starts its retrograde loop on September 10th, which it will continue until November. This is an illusion of Mars going “backwards” in the sky – in reality, it is just Earth overtaking the red planet on its smaller, inside orbit.

Venus reigns serenely in the morning sky for the remainder of the year. It passes by the Beehive cluster in Cancer mid-month, and the crescent Moon is to the left of it on the morning of 14th September.

Capricornus is one of the constellations of the Zodiac and most people would know it as just ‘Capricorn’. Its name means “the Horned Goat” and it is a very old constellation. It is usually depicted as a goat with a fish’s tail for his hindquarters, an odd combination at any time. So why would such a fantastic creature be created?  Capricornus seems to date from Sumerian (pre-Babylonian) times and is connected with the god Ea or Oannes. Ea had many names, and one of them was “the Antelope of the Subterranean Ocean,” so this seems the most likely explanation.

About two thousand years ago the Sun reached the southern-most point of its annual journey amongst the stars of this constellation, hence the name of the Tropic of Capricorn. (Due to Precession, caused by the wobble in the Earth’s axis, this point now occurs in neighbouring Sagittarius.) 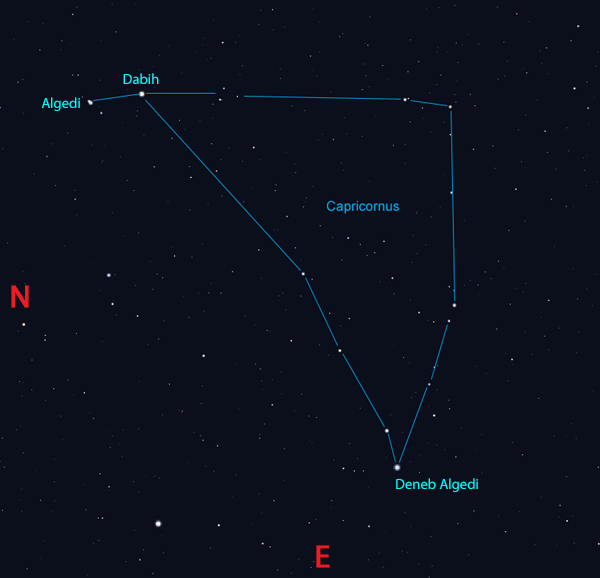 Capricornus is now high overhead as it gets dark. It follows behind Sagittarius.

Globular clusters are large clusters of hundreds of thousands of stars that are probably left over bits from when the galaxies formed. Most of the stars in the cluster are very old. Because the clusters typically orbit around the outside of the galaxy they retain a round, globular shape, which is how they got their name. We can see around 120 globular clusters that belong to our galaxy from Earth, and we can see thousands around other large galaxies beyond. At this time of year when the centre of the galaxy is overhead in the evening sky, we have the opportunity to observe a large number of our local globulars as they are concentrated around the middle of our galaxy.

M30 lies about 27,000 light years away, and is bright enough to be seen in a good pair of binoculars on a moonless night. It is on the south side of Capricornus, not far from the star 41 Capricorni. An interesting feature of this globular cluster is that it is moving in the opposite direction to most of the other objects orbiting the core of the Milky Way, indicating it was acquired from another galaxy, perhaps from one of the many satellite galaxies that belong to the Milky Way that got too close. It has also gone through a process known as core collapse, which concentrates stars towards the centre of the cluster. 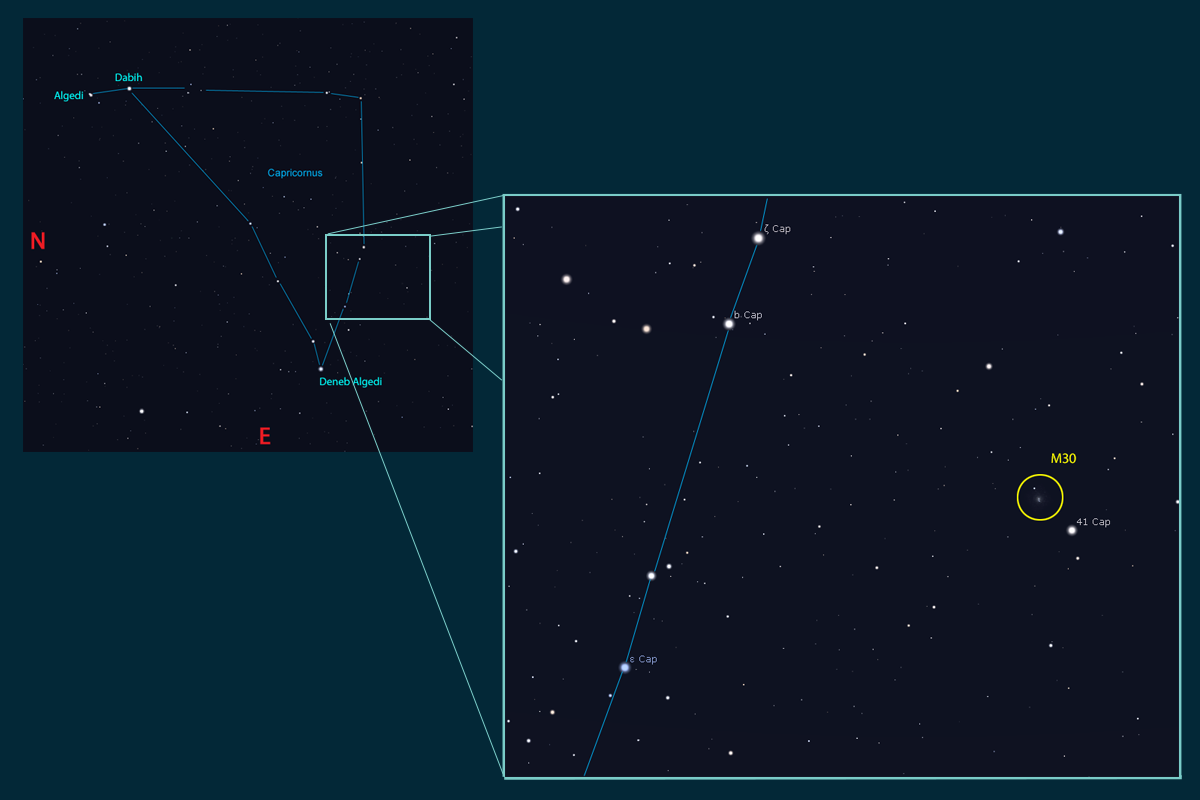 The globular cluster M30 is on the south side of the Capricornus, near the star 41 Capricorni.

September contains the second equinox of the year, one of the four major turning points in the annual celestial calendar. The solstices get more attention, as they mark the longest and shortest days of the year. The equinoxes mark the mid-way points between the solstices, and they are determined as a particular point in time, to the nearest hour, rather than the whole day the solstices get.

Equinox means “equal night” or more properly, when the days and nights are equal. This is because this is then the Sun is over the Equator, and all the Earth sees the same amount of daylight. The March equinox is marked as the point where the Sun crosses the celestial equator on it’s journey northwards along the ecliptic (see the picture below.) 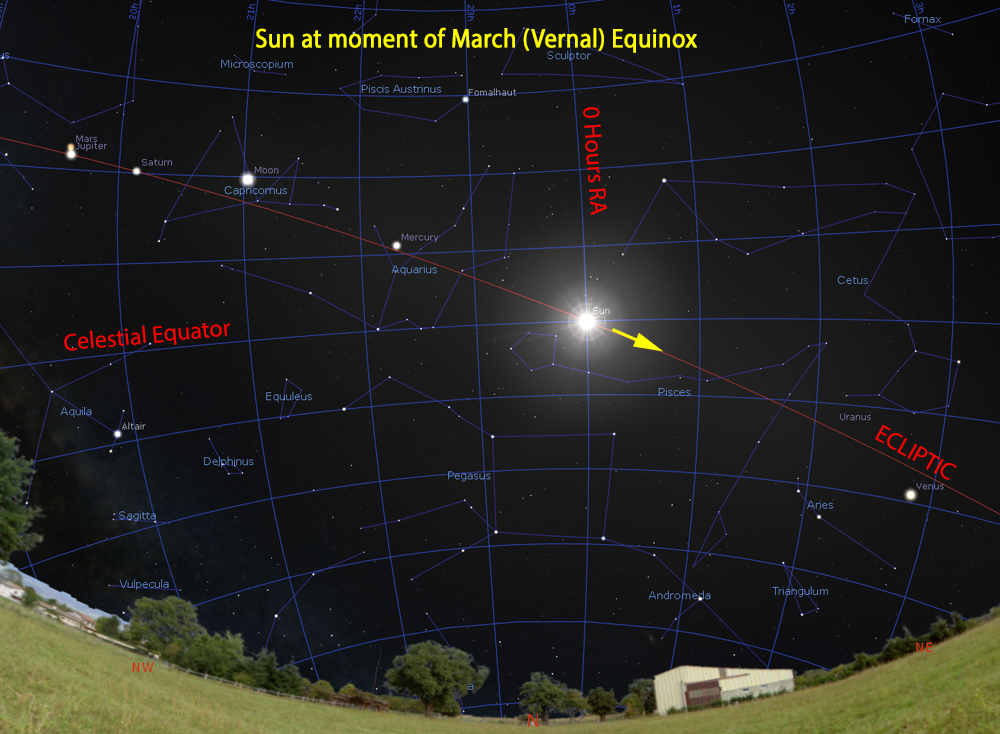 The March equinox also determines where the 0 point for the celestial coordinate system starts. Traditionally this is known as the First Point of Aries, as around 2,000 years ago the equinox did occur near where the stars of Aries are. But because of the precession of the Earth’s poles, where they wobble in a 26,000 year long circle like a spinning top, the point the equinox occurs in has slowly drifted through Pisces over the last couple of millennia. If you recall the song out of the musical “Hair,” where they sing of the “dawning of the Age of Aquarius,” by astronomical terms this won’t arrive until 2700 AD!

The September equinox occurs on the opposite side of the sky, with the Sun heading southwards once more. It currently occurs amongst the stars of Virgo, and it is moving towards Leo. While it has lesser traditional importance, for us in the southern hemisphere, it is our Australian Spring equinox, so we usually look forward to the warmer weather it brings.

The equinoxes are often associated with storms, both on Earth and in space. On Earth they might be referred to as the “Equinoctial gales” and meteorologists know that the worst storms can occur around these turning points of the year. Aurora chasers also know to pay close attention to the Sun around these times, as the biggest solar storms that cause spectacular auroral displays often occur close to the equinoxes as well. No one yet knows why this is so. Also this year the Sun is only just starting to come out of another very quiet period of minimum activity, so we might only get storms of wind and rain this year, and not magnetic ones as well. 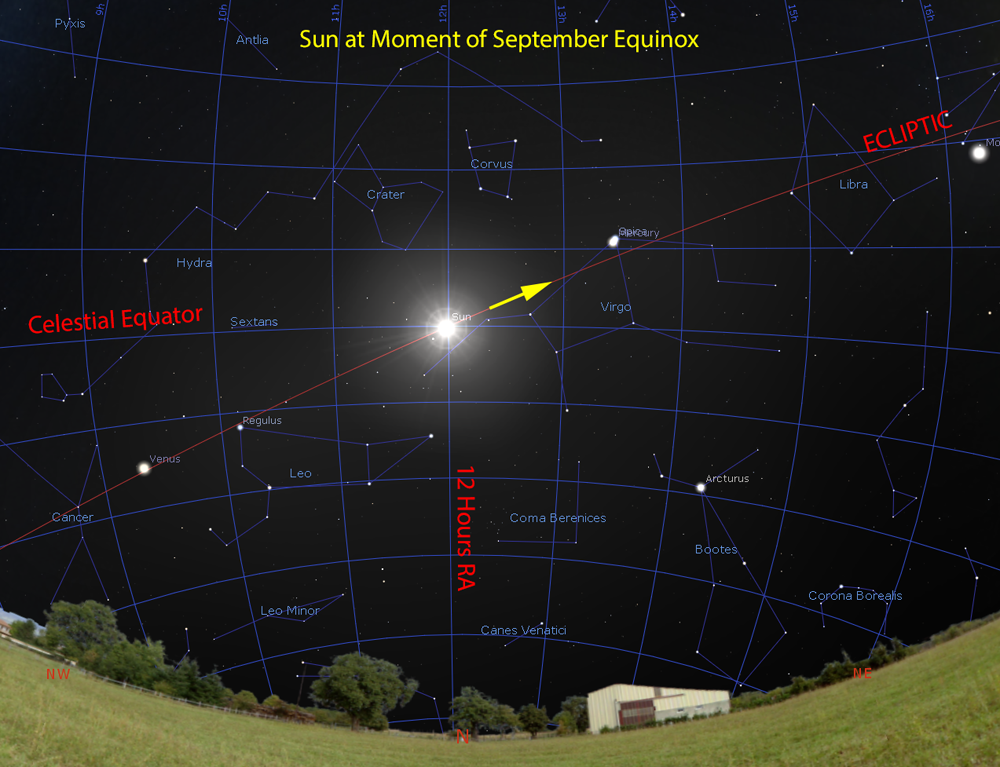