Yuri’s Night is the 12th of April, commemorating the first flight by a human into space. Touted as the World Space Party it aims to celebrate the power space has to bring people together. This year is extra special – it’s 60 years since Yuri Gagarin first launched into space!

Another anniversary will be celebrated this April for the iconic Lowell Dome at Perth Observatory. If you have ever visited the observatory you would have seen the towering structure of the dome housing the main research telescope – and maybe you have even climbed the stairs to enjoy the view over the state forest to the east, which few people get to see (when you get your breath back…) Perth Observatory are holding a special evening to honour the Lowell Dome on the 24th April, and they are also running an art competition where they are asking people to paint or draw the dome in their own style. All the information on the night and the competition can be found on the event page on the Perth Observatory website. 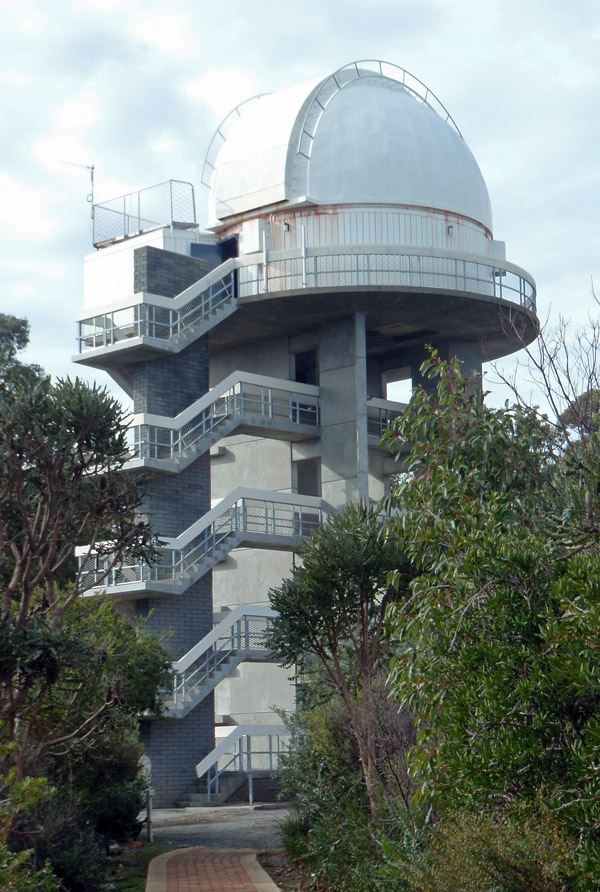 The Lowell Dome at Perth Observatory

Mars is still drifting along in the evening sky at the moment, low in the northwest at sunset. On the evening of the 17th of April the Moon will join it, and they will make a nice pair of objects between the two horns of Taurus the Bull.

Saturn and Jupiter are gradually rising earlier in night, and by the end of April Saturn will be rising around midnight, with Jupiter following an hour later. This means they are now high in the sky as dawn breaks. They are both near the stars of the constellation of Capricornus this year.

Mercury is still visible in the dawn twilight during the first week of the April, but after that it quickly disappears into the Sun’s glare. A crescent Moon will be hanging above it on the 11th, but it may be a challenge unless you have a clear eastern horizon.

Hydra has the distinction of being the largest and longest constellation in the sky. It stretches over 100 degrees, with the head near Cancer the Crab and the end of the tail down near Libra and Centaurus. The easiest part to recognise is the loop of stars that makes the head – tracing the full length of the tail may require a dark sky and lots of patience.

There are two commonly told stories from Greek mythology as to why Hydra was placed in the sky. The first involves two neighbouring constellations, Corvus the Crow and Crater the Cup. Corvus was given the Cup by the gods to go and fill with cool water, but the crow was distracted by some ripe figs. By the time he had eaten the figs and realised how long he had been gone, he snatched up a snake (Hydra) and took it back to the gods as an excuse for his tardiness. The second story is that the snake represents the nine-headed monster that Hercules had to slay as one his Twelve Tasks. Each time he cut off a head another one grew in its place, but he eventually won the fight.

The brightest star in Hydra is called Alphard, the ‘Solitary One’, and it is an apt name as it does seem rather lonely in an otherwise unremarkable patch of sky. 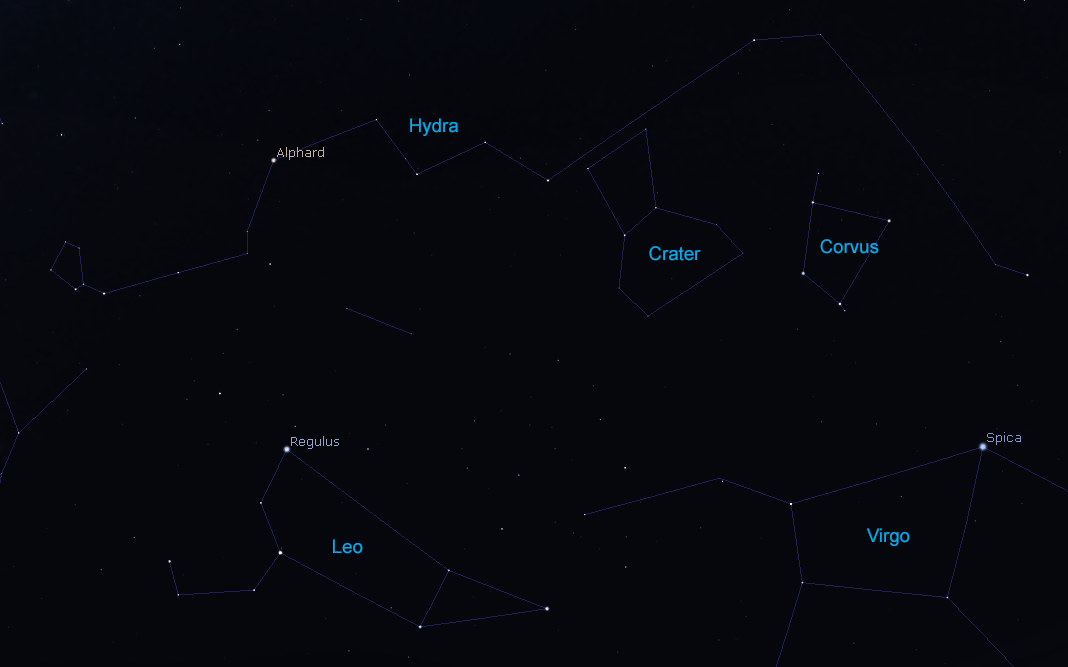 The Ghost of Jupiter

Not all stars go out with a bang. Some stars die quietly, puffing off their outer layers before fading down to a cinder. Along the back of Hydra you can find a large and bright example of that happening; it is known as a planetary nebula.

Planetary nebulae have nothing to do with actual planets; they got their name from musician-turned-astronomer William Herschel, who discovered the planet Uranus. Many planetary nebula do look just like his planet – a large, slightly fuzzy dot with a distinct tinge of aqua colour as seen by the eye.

The Ghost of Jupiter (NGC 3242) is a planetary nebula that is large enough that it looks the same size and shape as Jupiter in a telescope. It is large and bright enough that if you only have binoculars at hand that you might be able to spot it, but a dark sky away from light pollution will be a help in this situation. Small telescopes will show the disk of the nebula easily but you need a big telescope (16” or above) to see any detail inside it.

To find it, trace the spine of Hydra from the brightest star, Alphard, to mu Hydrae then make a short star hop to the nebula (see the guide chart below).

Planetary nebulae are a just a step in the process of death for small stars, like our Sun, and they don’t last very long. This nebula will have probably expanded enough to dissipate away to nothing in another 10,000 years, so enjoy it while you can!

60th Anniversary of the First Man in Space

The 12th of April 1961 is the date that man first flew in space. Russian cosmonaut Yuri Gagarin made one orbit of the Earth in his capsule Vostok 1 to make history 60 years ago, and start what was known as the Space Race during the 1960’s. The 12th April is also the 40th Anniversary of the first space shuttle flight, STS-1, in which the space shuttle Columbia orbited the Earth for several days with two astronauts on board. And it is also the 20th Anniversary of Yuri’s Night, the annual celebration of humanity’s first step into space and how it brings us all together as one people.

Gagarin was chosen as a cosmonaut partly because of his height – he was only 157cm tall. This was necessary as there was a limit as to how tall a person could be to fit into the Vostok capsule. He went through a rigorous training and was voted by his peers to be the best suited for the first flight. He was considered a hero after his pioneering feat, and travelled around the world meeting people. His life came to an untimely end in a fighter jet crash in 1968.

Sixty years later, we now have a permanent presence in orbit, with six astronauts from around the world on the International Space Station every day. Maybe it seems we haven’t gone very far, but we’ve still learnt so much about space in that time – and that’s also something to celebrate.