The summer solstice for the southern hemisphere occurs on December 22nd this year. The sun is the furthest south in the sky for the year and after this the days begins to get shorter for us again. Sunsets will keep getting later, however, until early January when the Earth reaches perihelion, the closest it gets to the sun in its orbit.

Mid-December is also time for one of the best meteor showers of the year for the southern hemisphere, the Geminids. The peak time for the shower are the nights of the 13th and 14th of the month, so you may notice more meteors than usual around this time. This year they occur just after Full Moon, so it’s probably not the best year to try and catch them, as the moonlight will wash out most of the fainter meteors.

The furthest object visited by a space craft in our solar system, 2014 MU69, was officially renamed “Arrokoth” in a ceremony in early November. Meaning “sky” in the Powhatan/Algonquian Native American language, it is a name that “reflects the inspiration of looking to the skies and wondering about the stars and worlds beyond our own,” said Alan Stern, New Horizons principal investigator from Southwest Research Institute, Boulder, Colorado. 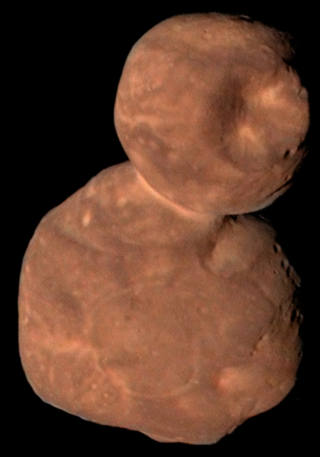 The next eclipse season starts at the end of December, with an annular solar eclipse over Indonesia on Boxing Day and a penumbral lunar eclipse visible from Australia to Africa/Europe in early January. Northern WA and the Top End will see the Sun partially eclipsed during this event. More details on this solar eclipse below!

The first week of December will be your last chance to observe Jupiter for 2019. After this it will sink into the evening twilight and then behind the Sun, where we won’t see it again until the end of January in the morning sky. Being so low in the sky it may be hard to get a clear view of its cloud patterns, but you should still be able to see the four Galilean satellites – Io, Europa, Ganymede and Callisto – on either side of it.

Venus is now out of the evening twilight and ready to be the evening star for summer. It meets up with Saturn on the 11th, then at the end of the month a crescent Moon will pose with it, which should make for a pretty sight. December is also your last chance to observe Saturn before it goes behind the Sun as well – it will be out of sight during January.

Mars and Mercury start the month together in the morning sky, but this doesn’t last long. Mercury hangs about in the morning twilight and is probably only for the keenest of observers, while Mars rises a little earlier each morning. It will be to the right of the waning Moon on the morning of the 23rd.

Taurus is an ancient constellation, thought to have been created around 5000 years ago by the Sumerians to mark the position of the Sun at the spring equinox. The bull was seen as a powerful symbol of fertility at that time, and remained so for thousands of years afterwards. Only the front section of the Bull is seen in the sky – his head, horns and forelegs. For us in the southern hemisphere he appears to be upside down.

His face is made from a V-shaped cluster of stars known as the Hyades (Hi-ay-dees) which is one of the closest clusters of stars to our own sun, lying 151 light years away. At one end of the V is the bright star Aldebaran (Al-DEB-bar-ran), which means “the Follower” – he is following the small cluster of stars known as the Pleiades (Ply-ay-dees or Plee-a-dees, but not the Plee-adds!). Aldebaran is only 65 light years away. 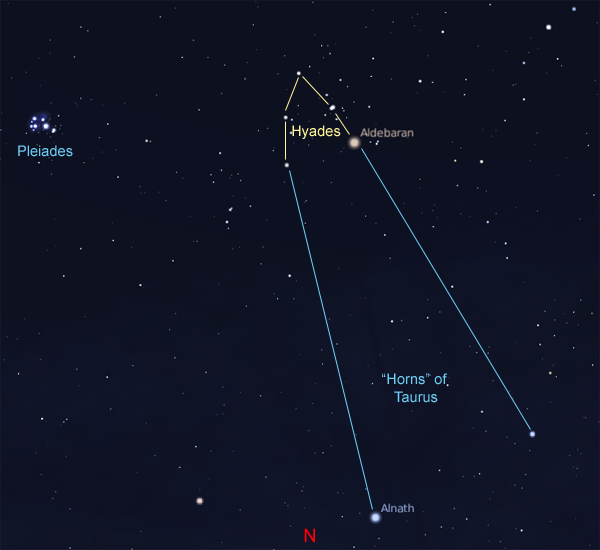 Look towards the north (and to the west of Orion) to find an upside down Taurus in the sky.

Although one of the best deep sky objects in the southern sky this globular cluster has not attracted a more common use name. Regular sky watchers often shorten it to “47 Tuc,” and that’s how it’s usually known. So where did the name come from?  The number at the front is known as Flamsteed number, a system where stars in a constellation are numbered in sequence from north to south and east to west. Tucanae is the genitive case in Latin for Tucana, the Toucan. So it is saying that this ‘star’ is the 47th star in the constellation of the Toucan. Yet today we know it’s not a star, but a spectacular globular cluster.

A globular cluster is a large cluster of stars left over from when the galaxy formed.  They are round in shape (hence the name globular, or globe-shaped) as they orbit around the outside of a galaxy, not in it where they would be subject to the tidal forces of the galaxy as it rotates.  The stars within them are often as old as the galaxy itself.

47 Tucanae lies around 16,000 light years away – fairly close in galactic terms – and is visible as a faint fuzzy star to the unaided sky, just to the west of the Small Magellanic Cloud.  Binoculars will show you that it’s more than just a star and a small telescope will show you some of the million or so stars that are concentrated in this cluster. 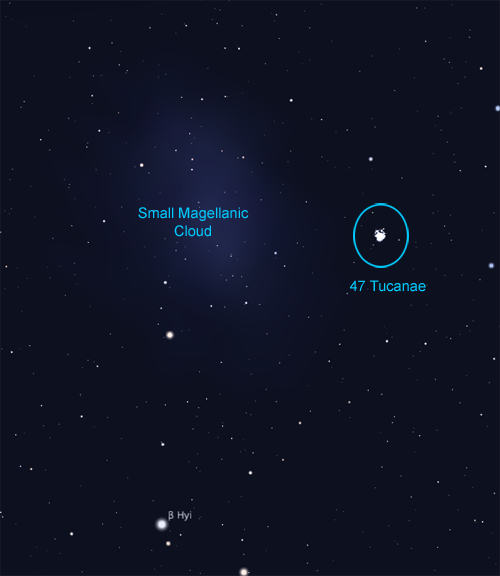 If you can see the Small Magellanic Cloud just look to the right (west) and 47 Tucanae should be visible.

An annular eclipse of the Sun will occur on December 26th this year. Because the Moon will be near its apogee point, its furthest from the Earth its orbit around us, it won’t cover the Sun completely and an annulus (which is Latin for “ring”) of light will still shine around the Moon. The path of this eclipse starts over the Arabian Peninsula, crosses the southern tip of India and the top of Sri Lanka, and then heads down to the islands of Sumatra and Borneo, just clipping Singapore, before finishing in the western Pacific Ocean.

Reminder: DO NOT LOOK DIRECTLY AT THE SUN. The best and safest way to follow the progress of the eclipse if you don’t have specialised equipment is to make a pinhole projector. Take a piece of card and poke a hole about 1 – 2mm in size in it. Project an image of the Sun onto another blank piece of card underneath it. It should show the Sun with a bite taken out! Also look at the shadow of tree leaves on the ground, the sunlight shining through should be projected as well.

In WA, you will be unlikely to notice anything happening unless you are north of Geraldton. Times and maximum percent of the Sun covered are given for some major towns in the table below. The shadow will travel out of the northwest and head away to the northeast.

You can explore the circumstances of this eclipse further at www.timeanddate.com/eclipse and even find out the times for your particular location by clicking on the detailed eclipse path map.

More technical information can be found at eclipsewise.com