Astrofest 2020 is happening on Saturday 20th February at Curtin Stadium, Curtin University, from 5.30-9.30 pm. Preregister at www.astronomywa.net.au to be in the running for some great prizes and also to see some photos of past Astrofest events. Even if it’s cloudy there will be lots to see and do.

Looking for a planet in the evening sky? Look low to the northwest to find Mars, the only bright planet visible in the evening sky this month. The first quarter Moon will be above it on the evening of the 19th, and you might spot the open cluster known as the Pleiades, or Seven Sisters, to the right.

The other four planets are all on the morning side of the Sun in February, with Venus slowly sinking sunward and Saturn, Jupiter and then Mercury rising out of the morning twilight. Having four planets grouped so closely together means there are going to be some close encounters and nice photo opportunities.

To tell them apart, Venus is always the brightest one, Jupiter the next brightest, and this month Saturn will be the highest one after the 6th, when Venus meets up with the ringed planet. The waning crescent Moon wanders into the grouping on the morning of the 11th, when Venus will be just above Jupiter.

Mercury should be visible by the 14th, when it will be at the same height as Venus, but to the left. It will keep climbing up into the predawn sky as the month draws to an end, becoming easier to see. On the morning of the 24th it will be between Saturn and Jupiter. It will have one more encounter with Jupiter in early March, and remain and easy predawn target until the end of next month. 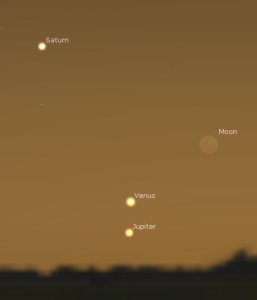 The dawn sky on the 11th: A crescent Moon joins Saturn, Venus and Jupiter. 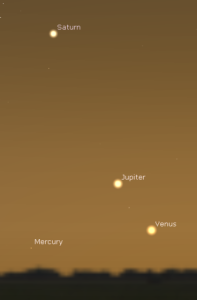 Dawn sky on the 14th: Venus drops below Jupiter and Mercury rises into the picture on the left.

Columba the Dove is a small constellation at the feet of Canis Major the Great Dog. It was originally called Columba Noachi, the “Dove of Noah” by Petrus Plancius, who introduced it to the sky in 1592. Most astronomers recognised it in their charts in the following centuries until it was formalised in the sky by the International Astronomical Union (IAU) in 1930.

The brightest star in the constellation is called Phact, which means “ring dove,” and the second brightest is called Wazn. 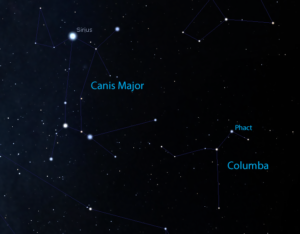 There isn’t much to look at in this constellation, as it lies on the edge of the star clouds of the Milky Way, so it often gets forgotten, but for trivia buffs it may be interesting to contemplate that when you are looking in the direction of Columba you are also looking in the direction of the antapex; this is the direction the solar system is moving away from. While the solar system is rotating around the centre of the galaxy, taking about 225 million years to complete one orbit – this is known as a galactic year – it also bobs up and down in the galactic arm at the same time. We’re considered to be on the ‘up’ bob at the moment, heading towards a spot southwest of the bright star Vega. So looking at Columba is like looking down at our feet, looking back at where we have been.

Under the feet of Orion is the constellation of Lepus the Hare. It has two objects of interest to the small telescope owner, the first being the variable star R Leporis, also known as Hind’s Crimson Star for its notably red colour at maximum. It last reached maximum in early December 2017 and is now fading, but may still be within reach.

More reliably found is the globular cluster Messier 79. If you draw a line through the stars alpha and beta Leporis and continue it on you should find this moderately distant globular cluster that lies around 42,000 light years away. It has a lot of older, redder stars in it, as is common for globular clusters, but its particular make-up has some astronomers believing it may actually belong to another galaxy that is passing close to the Milky Way at the moment, known as the Canis Major Dwarf Galaxy. Whether it is or not, it will still be visible all summer for you to enjoy in the sky. 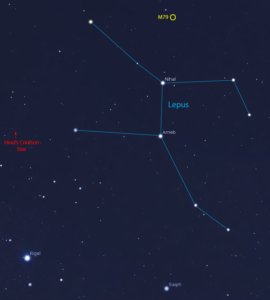 Lepus the Hare is at the foot of Orion the Hunter. The bright stars Rigel and Saiph mark his knees.

There will be lots of holding of breaths at NASA on February 18th as the latest robotic rover to reach Mars will attempt to land. Named Perseverance, it will come down near Jezero Crater, where an ancient river deposited a fan of sediment billions of years ago, when Mars had running water on its surface. This is a rough surface, and perhaps the most hazard landing site attempted yet. Anything could happen.

Once “Persy” makes it safely down, and unfolds, it will be able to roll around and explore the area, looking for signs of microbial life. It also carries a first for any mission – a small, solar-powered helicopter drone called Ingenuity, that will be able to scout out the ground ahead in short flights. 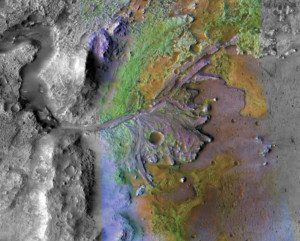 Where Perseverance is headed – the sediment fan of an old river in Jezero crater on Mars.

You can find out more about the mission at the official Perseverance website and follow along on your favourite social media as well (just put “NASA,” “Mars,” and “Perseverance” in the search bar).