The latest sunset of the summer occurs on the 3rd January, when the Earth reaches perihelion, or the closest point in its orbit to the Sun. However, you probably won’t notice the evenings growing noticeably shorter until February – although the time for sunrise should have changed by about half an hour during this time.

While you’re out there enjoying the warm summer evenings, find out what satellites will be visible from your location by checking out www.heavens-above.com It’s also available as an app for your phone or tablet. Satellites will be visible nearly all night long, especially during the first weeks of January, when the Sun is still near its southern extremity and not all that far below the horizon – at least not from a satellites high point of view.

If you want a last glimpse at the gas giants Jupiter and Saturn you had better be quick, as they are slipping fast into the glare of the Sun this month. They will pass behind the Sun in late January and remerge into the morning sky mid-February. Jupiter has overtaken Saturn and the gap will continue to grow as the bigger planet moves ahead of slower Saturn.

Mercury is also in the evening sky during January. Although summer usually isn’t the best time to see Mercury because of the slant of the ecliptic to the horizon at this time of year, keen observers with a clear, flat western horizon should be able to easily see it during the second half of the month. 2021 is going to be a big year for Mercury, with several good apparitions both sides of the Sun, several planetary conjunctions to enjoy and the European Space Agency mission Bepi-Colombo arriving this year, too.

Mars is still in the northwest evening sky, slowing fading in brightness and distance from Earth. On the 21st, when the Moon is above Mars, Uranus will be roughly half-way between them. You will need at least binoculars to see this, where Uranus will look like a star (one that isn’t on the charts) and a telescope should show Uranus’ aqua-coloured disc with moderate magnification.

Venus continues to hang about in the morning twilight. A pretty crescent Moon will join it on the morning of the 12th January. 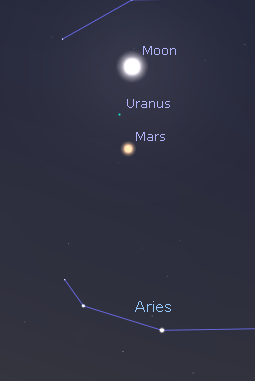 Auriga represents an ancient Greek king who was a famous charioteer. It lies along part of the northern Milky Way and is best seen from Australia during the summer months.

The brightest star in Auriga is Capella, which means the ‘she-goat’. It is actually a pair of giant yellow stars that orbit each other. It lies about 42 light years away, which is pretty close to Earth. As seen from southern Australia Capella never gets very high above the northern horizon and is often mistaken for a UFO as it seems to wobble and blink as it goes along – this is just an optical illusion caused by the atmosphere moving about in front of the star. Low down towards the horizon this effect is always more noticeable.

Auriga shares a star with Taurus. Although Auriga is always drawn using this star, it is known as beta Tauri, or Elnath, “the Butting One.” It marks the tip of one of the horns of Taurus. 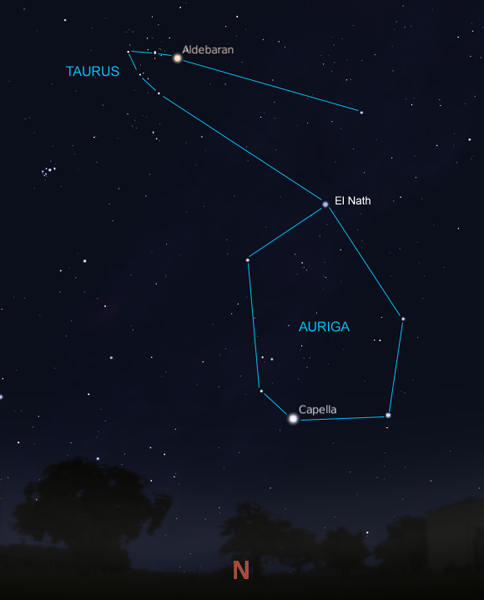 Messier 41 (M41) is a large open cluster of stars in the belly of the Big Dog, Canis Major. You only need binoculars to find this object, although if you are in a dark enough location you may even be able to see it with the unaided eye. To find it locate Sirius first then move southwards (celestial south, that is, towards the south celestial pole) about 4 degrees (8 moon widths). It has about 100 stars in the cluster and together they span a distance of 26 light years.

Open clusters are groups of stars which all formed together out of the same cloud of dust and gas. Our galaxy is dotted with these star forming regions and we can over 10,000 of them from our vantage place here on Earth. 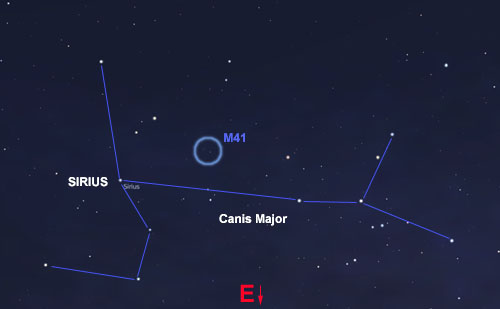 Wars often lead to a lot of technical developments. The telescope can be seen as a product of war, in a way. So can the field of Radio Astronomy. In late January 1946 the first radio interferometry measurements of the Sun were made using old army equipment on the cliff tops of Dover Heights in Sydney, as it rose above the ocean. Ruby Payne-Scott collected measurements direct form the Sun and from signals bouncing off the surface of the ocean to put a picture together that morning.

Together with Joe Pawsey, after whom the Pawsey Supercomputing Centre is named after, and Lindsay McCready they were able to determine that the corona of the Sun, the bright region of streaming plasma seen around the Sun during a solar eclipse like a crown, was at least one million degrees in temperature, far hotter than its actual surface. They and the other astronomers there also determined sunspots were a major source of radio noise and found other sources of radio noise in the universe, such as our own Milky Way. Their initial findings were published in the prestigious Nature magazine.

Ruby Payne-Scott was a brilliant scientist but had the misfortune to be working at a time when married women were not allowed to hold jobs in the public service. She tried to hide her marriage for several years but was eventual found out when she fell pregnant and was forced to resign. She also protested and the inequality in pay between the sexes after WWII.

Pawsey proved to be a very able manager and radio astronomy flourished under his leadership. As well as the Pawsey Supercomputing Centre here in Bentley, Perth, there is a crater on the Moon named after him.

Some of the history of that early time at Dover Heights is told here in the CSIROpedia if you like to learn more and see some photos of the equipment they used. 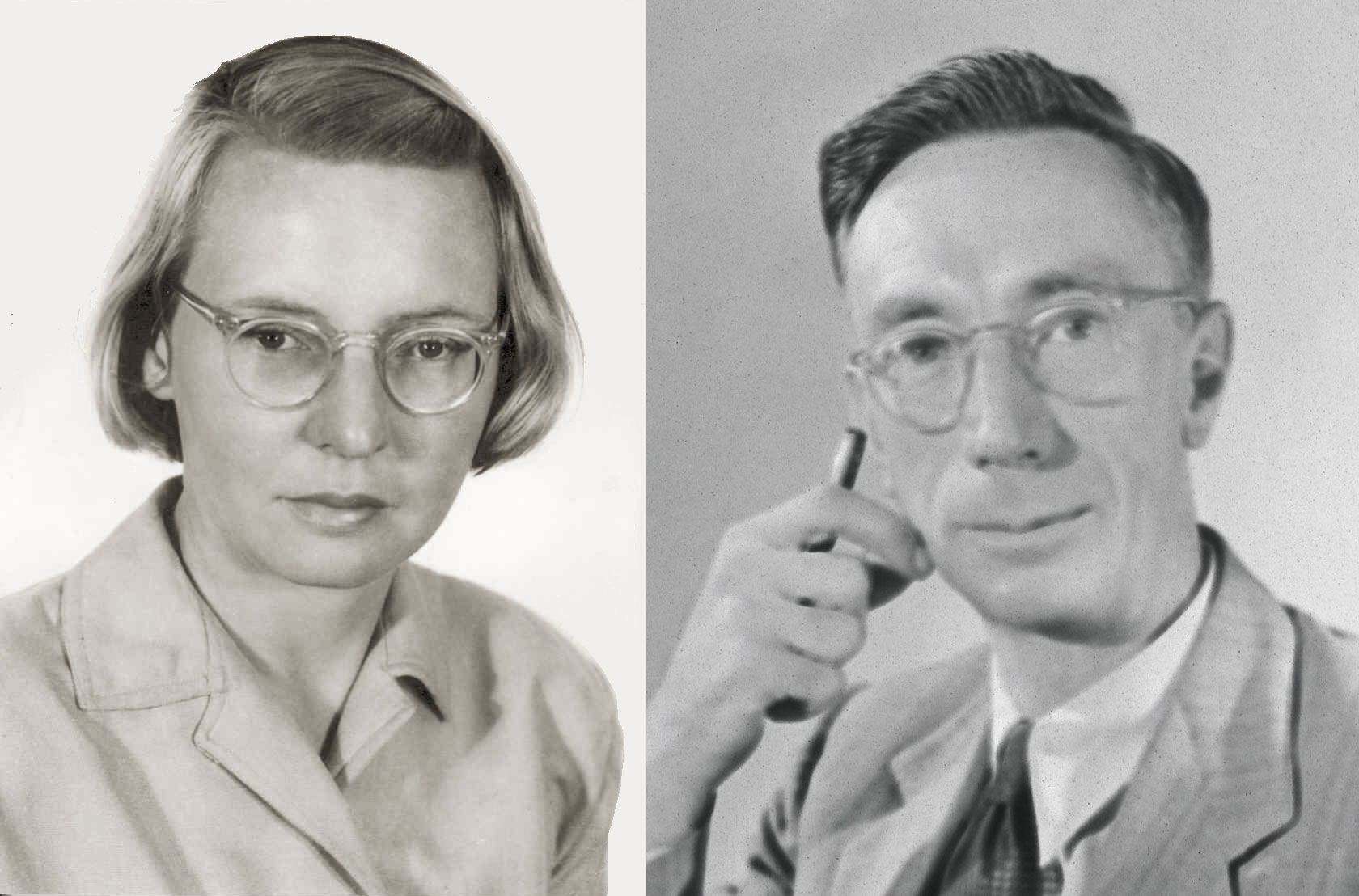