Near the end of June is one of the major turning points in our celestial calendar – the Winter Solstice for the Southern Hemisphere. This occurs on 21 June in 2021. On this morning, the sun will rise at the furthest point north for the year, and after this date, the days will start getting longer again.

Asteroid Day is on 30 June. It’s a day to raise your awareness about asteroids in general, not just about the hazards they pose to Earth. Think of it as an opportunity for you to learn what won’t happen! The official site is asteroidday.org

There is an annular solar eclipse occurring on 10 June, which crosses the geographical north pole. This is the pair to the total lunar eclipse we saw on 26 May, and it will appear as a partial eclipse over all of Europe and most of Russia. The lunar eclipse occurred when the Moon was at perigee, or closest to the Earth in its orbit. Now, two weeks later, the Moon is at apogee, its furthest point, so it is too far from the Earth to cover the Sun completely, hence we have an annulus, or ring of the Sun, around the Moon at maximum eclipse. The next eclipse season is in November and December this year.

June 2021 is the calm before the interesting stuff begins to happen with the planets in the sky. So take a breath, and let it out again, as we wait for brilliant Venus to rise out of the evening twilight and be more easily seen, and for Mars to sink down towards it, ready for a conjunction in July. Cameras at the ready for a slender crescent Moon under Venus on the evening of 12 June.

On the eastern horizon, Saturn makes its way towards easy evening viewing. By the end of June, it is rising by 7.30pm, early enough to have a good look at it before going to bed. Jupiter is rising about an hour and a half behind it. This also means they will be visible most of the night now – if you can stay up past midnight.

Mercury is too close to the Sun for the first half of June, but during the last week of June and the first week of July you should be able to see it in the morning sky under the V-shaped face of Taurus the Bull (which is the star cluster known as the Hyades.) Orion is the south (right.) 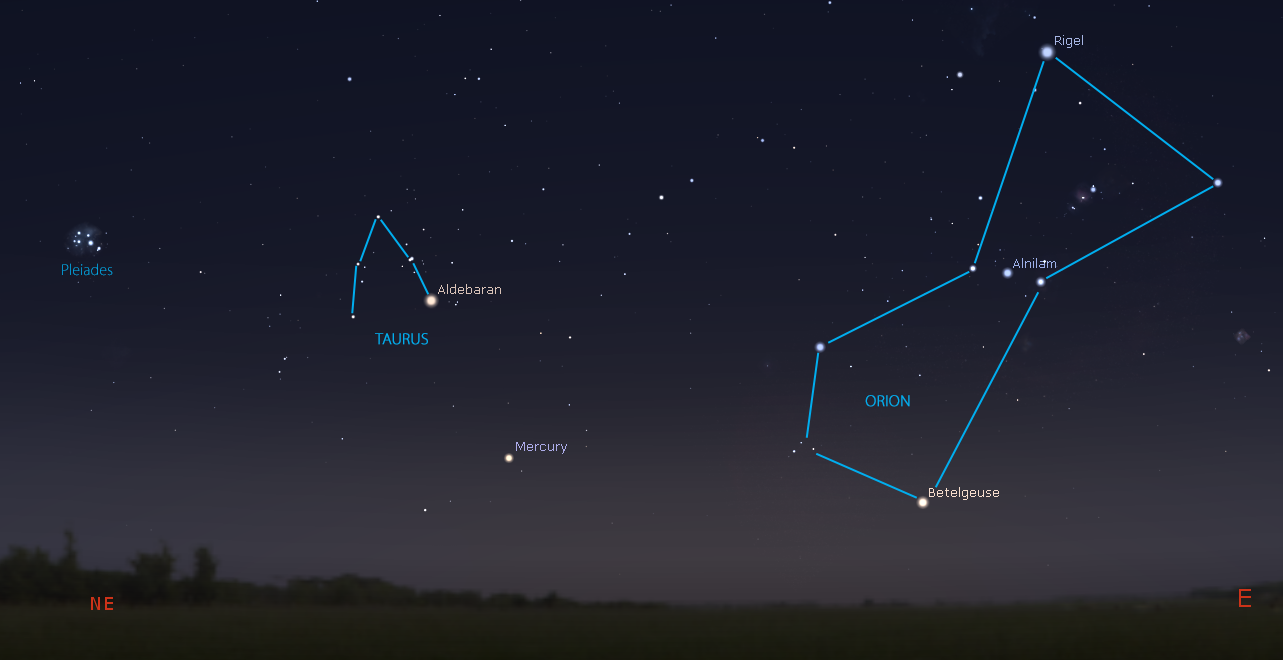 Libra is one of the twelve constellations of the Zodiac, found in between Virgo the Maiden and Scorpius the Scorpion. This constellation was first widely used by the Romans in the first century BC, but it could date to an earlier time than this. Libra came to mark the place where the September equinox occurs amongst the stars (where the sun crosses the celestial equator from North to South). It represents the balance of equal day and night that occurs at the equinox. To the Romans it was connected to Virgo, who they saw as Astraea, goddess of justice, often drawn holding the scales aloft while blindfolded.

The ancient Greeks didn’t see this area of sky as the Scales, though – they saw these stars as the claws of the Scorpion. That is why Alpha Librae is called Zubenelgenubi, ‘the southern claw’ and Beta Librae is Zubeneschamali, ‘the northern claw.’ The ancient form of Scorpius was one huge creature with these claws attached. In 2016 gamma Librae was given the official proper name of Zubenelhakrabi which means “claws of the scorpion” 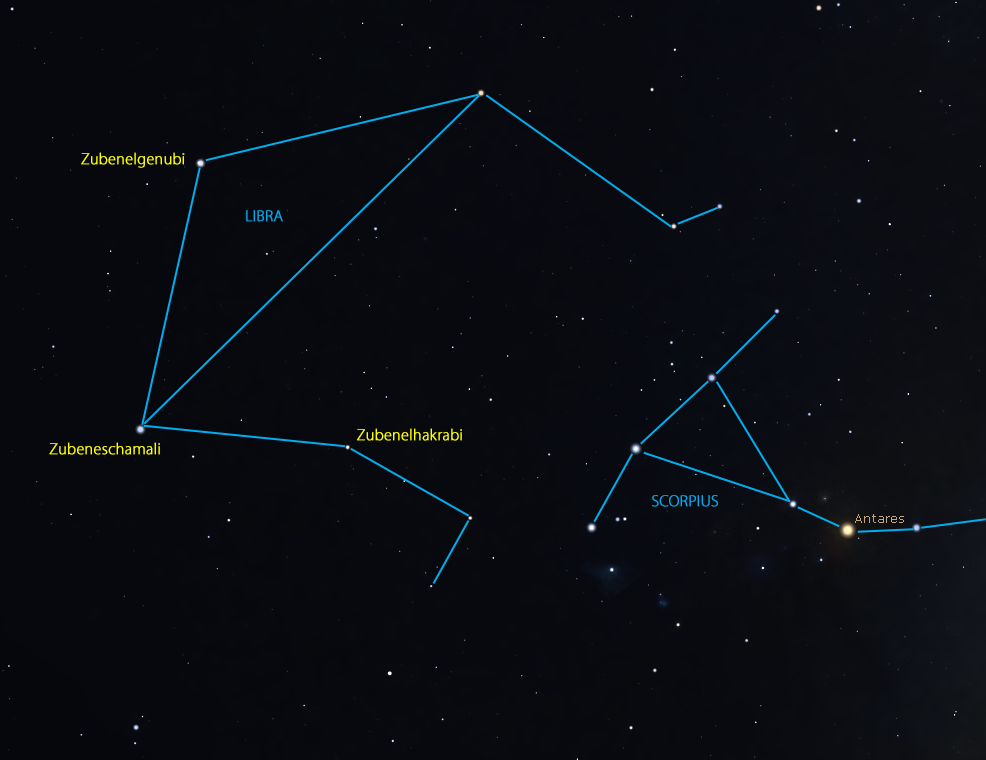 The Southern Cross has more than one jewel in it. Have you ever noticed the red star next to beta Crucis, or Mimosa, when you have been trying to find the Jewel Box? Perhaps its time to take a second look.

It is a star that goes by several names: DY Crucis, ESB365 and the old fashioned “Ruby Crucis,” which refers to its deep red colour. And with white Mimosa next to it, the contrast is all the more startling. Normally this red colour would be caused by the temperature of the star, but with this star the intense red is caused by an abundance of carbon in its outer shell. The star has used most of its hydrogen and is burning helium straight to carbon, rather than oxygen. This is why it appears redder than other red giant stars you might be familiar with, such as Antares or Aldebaran, which have more oxygen in their outer shells. It’s also around 4,077 light years away, much further than Mimosa, which is only 280 light years away, so that is probably why it seems so small next to Mimosa.

It is also a variable star, a star that changes in brightness over time. This feature was discovered by amateur astronomers in South Australia, so the star received the designation DY Crucis.

Ruby Crucis is next to Beta Crucis, or Mimosa, the left arm of the Southern Cross.

The China National Space Administration (CNSA) successfully landed and deployed their first Martian rover on May 14th. Named Zhurong, it rolled down a ramp off the platform and surface of the Utopia Planitia area of Mars. It is being monitored from space by the Tianwen-1 orbiter and is expected to operate for at least 90 days, powered by solar panels.

It will take some samples and store them on board, with the expectation they may be retrieved one day in the future. The mission will also demonstrate and test technology for a future sample-return mission to Mars in the 2030’s. 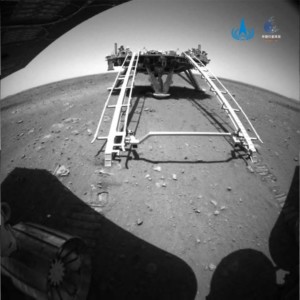 Zhurong looking back at the landing platform once it had rolled onto the surface of Mars. Image credit: CNSA