Now is a good time to see meteors, with the Eta Aquarid meteor shower active during the early hours of the morning in the first week of May. Unfortunately, the phase of the Moon is not favourable for good viewing of this shower in 2021, as the waning Moon drifts across the centre of view during the peak of the shower. Even if you don’t want to be up in the cold morning hours to see this major shower, keep looking up during the evenings, as there are a couple of smaller meteor showers active just after sunset at this time of year. 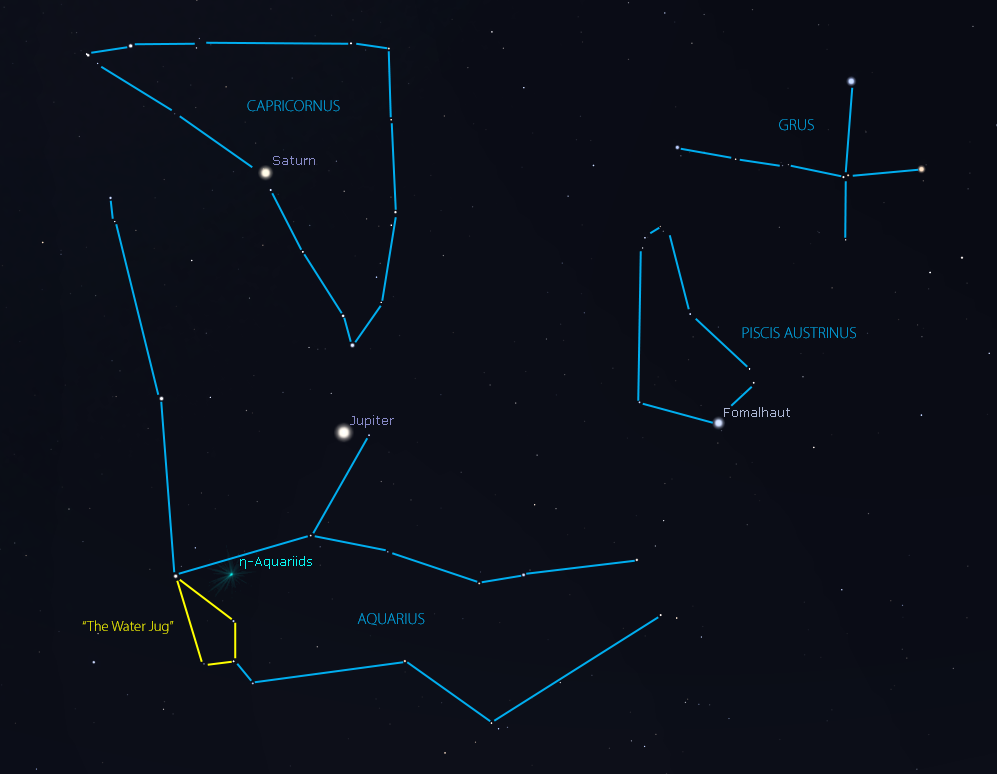 The radiant for the eta Aquarids is near a “Y” shaped asterism of stars that forms the mouth of the water jug. Aquarius, the Water Bearer, is pouring water out from the jug. This year Jupiter and Saturn will also be in the picture, looking east about 3 am, and the waning Moon nearby, if not in the middle of this picture drowning out the stars! Credit: Stellarium

Late May sees the beginning of the next eclipse season, with a total lunar eclipse, which we will be able to see, followed by an annular solar eclipse in June which crosses the geographical North Pole. No doubt some one will make the trek to attempt to see it! Meanwhile, for those of us stuck at home, there is more detailed information about the total lunar eclipse below in the feature section, which is nicely timed for early evening viewing on Wednesday 26th May. 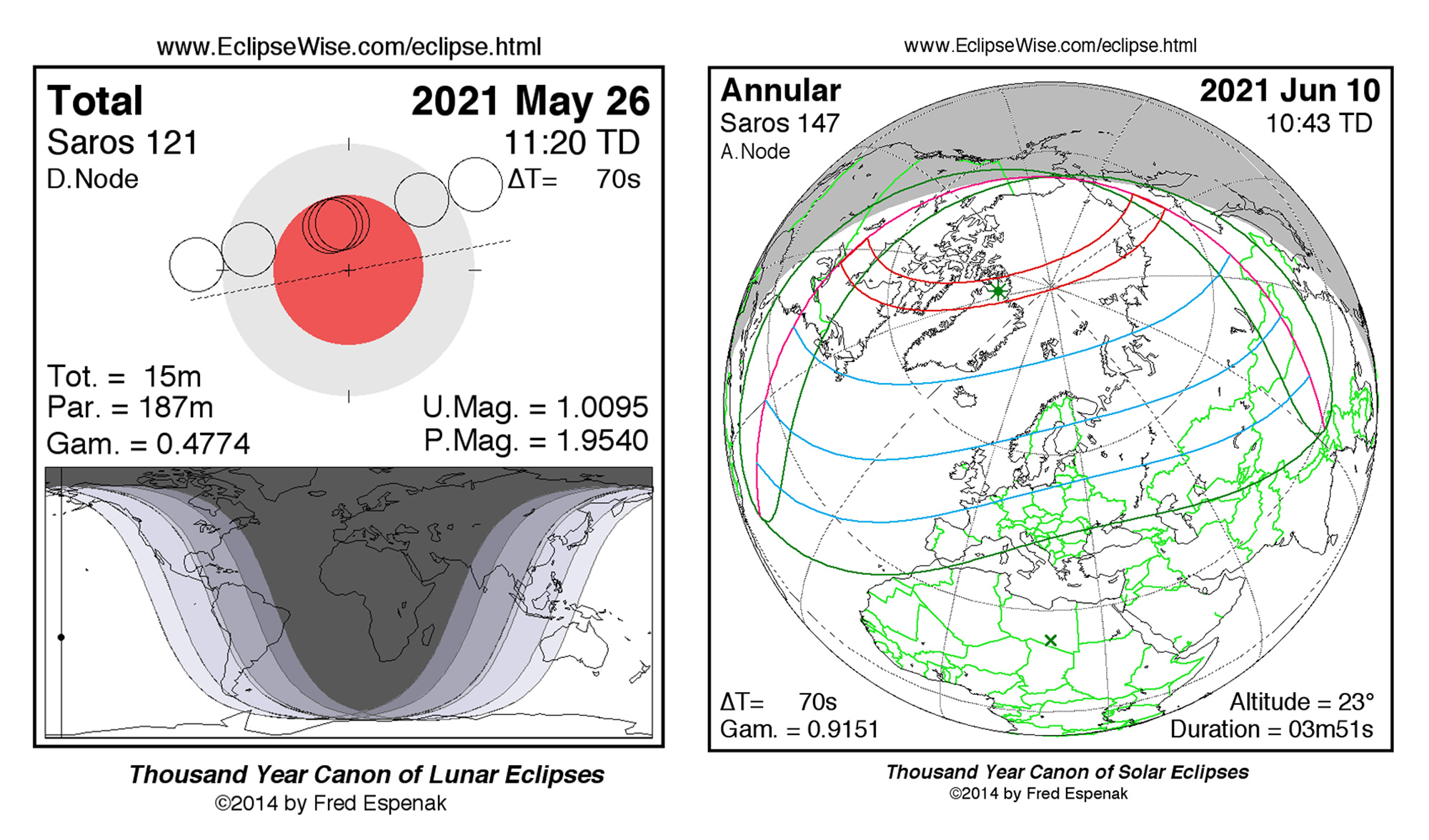 Mercury makes a poor return to the evening sky during May. It doesn’t rise out of the twilight at all, so you will need a clear north-western horizon to find it. Coming up underneath it is the much brighter planet Venus, returning to the evening sky. Venus will become easier to see from June onwards, but you might spy low in the bright evening twilight if you are lucky. Mercury meets up with Venus on the evening of the 29th, as Mercury starts to head back down into the Sun’s glare.

Mars maintains its station in the northwest evening sky. The stars behind it are changing with the season, though, and now it amongst the stars of Gemini. The Moon is underneath it on the evening of May 16th.

Saturn and Jupiter are high in the sky for pre-dawn observers. Saturn rises before midnight during May, and by the end of the month it rises before 10pm. Jupiter follows behind, rising at midnight mid-month. The last quarter Moon will be next to Saturn on the morning of the 4th, if you aren’t sure which “star” to look at. Jupiter is brighter, and remains visible (along with Saturn) as the morning sky brightens.

Crux, better known as the Southern Cross, is high in the early evening sky at this time of year. Because it’s so eye catching, most people forget about the constellations around it. Crux is surrounding on three sides by Centaurus, an old and very large constellation. But below it lies a small constellation that could be seen to have a close connection to the Southern Cross here in Australia.

Musca the Fly was originally known as Apis the Bee. It was created by two Dutch navigators in the late 16th century.  The French astronomer Lacaille renamed it in 1752 and that is how it has been known since.  It doesn’t really look like the common blowfly that we know so well here in Australia, but if you turn it upside down you can see the wings extending out from its long body. 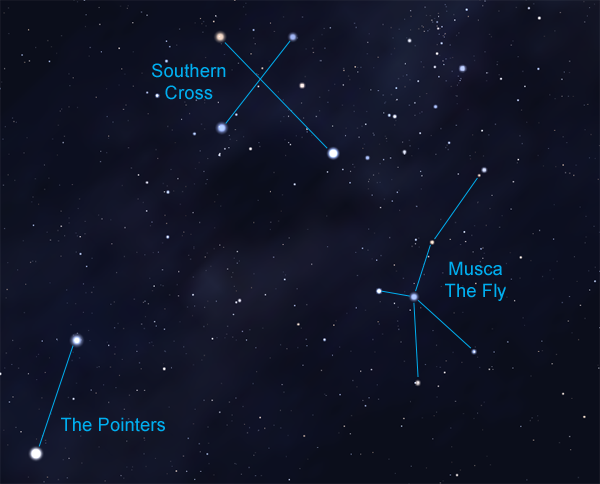 As the Southern Cross climbs higher into the evening sky, so does Centaurus, the large constellation that surrounds it on three sides. Centaurus contains a number of good objects to see, such as alpha Centauri, the closest star outside of our solar system, and omega Centauri, a huge spectacular globular cluster of stars. Just above omega is a galaxy whose mysteries have gradually been revealed over recent years.

Commonly known as Centaurus A, as it is a strong source of radio emissions in Centaurus, you might also find it marked on charts as NGC 5128.  It is part of our local group of galaxies, lying only 14 million light years away.

Photographs of this galaxy show a thick band of dust circling around it across the middle.  This band of dust is easy to see even in binoculars.  It appears to cut the galaxy in half, which has led some people to nickname it the Hamburger galaxy.

The dust hides a lurking monster – a super massive black hole lies in the heart of this galaxy, the source of the strong radio waves and x-rays. 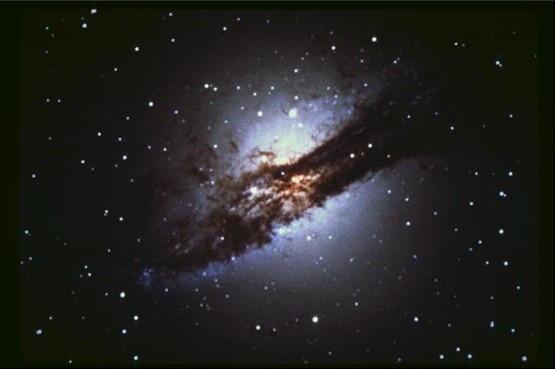 The dark dust lane running across the front of the galaxy known as Centaurus A is easy to see even in small telescopes. Credit:/NOAO/AURA/NSF

You will need to be a dark place with no moon in the sky to see Centaurus A (see the Moon Phases on these pages to check when might be the best time this month).  Light pollution, both man-made and natural, will just wash this galaxy away.

To find it, locate the Pointers to the Southern Cross, alpha and beta Centauri.  Beta Centauri is also known as Hadar.  Move up to epsilon Centauri and then keep going in the same line to the spectacular sight of Omega Centauri.  If you keep moving in the same direction, along that line made by Hadar, epsilon and omega, you should find Centaurus A about the same distance from omega as omega is from epsilon. (See finder chart below)

The good thing about this galaxy is that if you can get away to a dark place on a moonless night, you can actually spy this galaxy in binoculars. And some people have even seen it with the unaided eye under the right conditions. Now there’s a challenge! 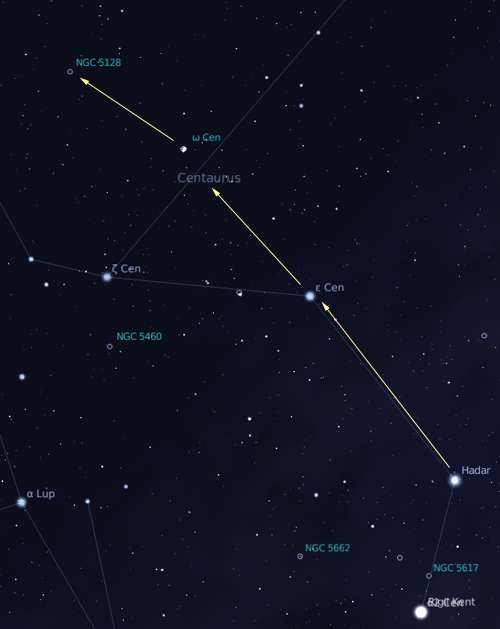 Star hop your way from Hadar to epsilon Centauri, then the big globular cluster omega Centauri before the last jump up to Centaurus A. Credit: Stellarium

The Moon will pass through the shadow of the Earth as it reaches Full this May, which means we will see a total lunar eclipse on the evening of Wed 26th May. This is even nicely timed for early evening, so you can watch a nice sky show and still make it to bed at a decent time for plenty of sleep on a week night.

The entire event lasts nearly five hours, but unless you are trying to photograph the whole sequence of the eclipse, you aren’t missing much if you miss the very beginning and the very end. Perth and the west coast of WA will miss the very beginning, as the Moon rises about 25 minutes after the eclipse has begun. But you probably won’t notice much for another half an hour, until the Moon starts to enter the Earth’s shadow, or umbra, around 5.45pm (times may vary a little depending on your location.)

The main part of the eclipse won’t last very long. The Moon will be fully within the umbra from 7.11pm to 7.25pm, with mid-eclipse around 7.18pm. The Moon will only be a handspan above the eastern horizon at this time. After that the Moon starts to move out of the shadow again, and will have left the umbra behind by 8.52pm. The event is not properly over until 9.50pm, when the Moon leaves the penumbra, or partial shadow of the Earth. Before then there won’t be much to see, with the Moon returned to normal brightness well before this.

This eclipse is occurring next to Scorpius, and the bright star Antares. Antares is a red giant star marking the heart of the Scorpion in the sky. It looks a bit like the planet Mars, but Mars is over in the north-west, in Gemini, during this event. See if you can trace out the curve of the Scorpion’s back and hooked sting, and also the fainter pattern that marks Libra the Balance Scales above during the eclipse.

More information about this eclipse and future ones can be found at www.timaeand date and you can change your location to find out the times for where you are as well. 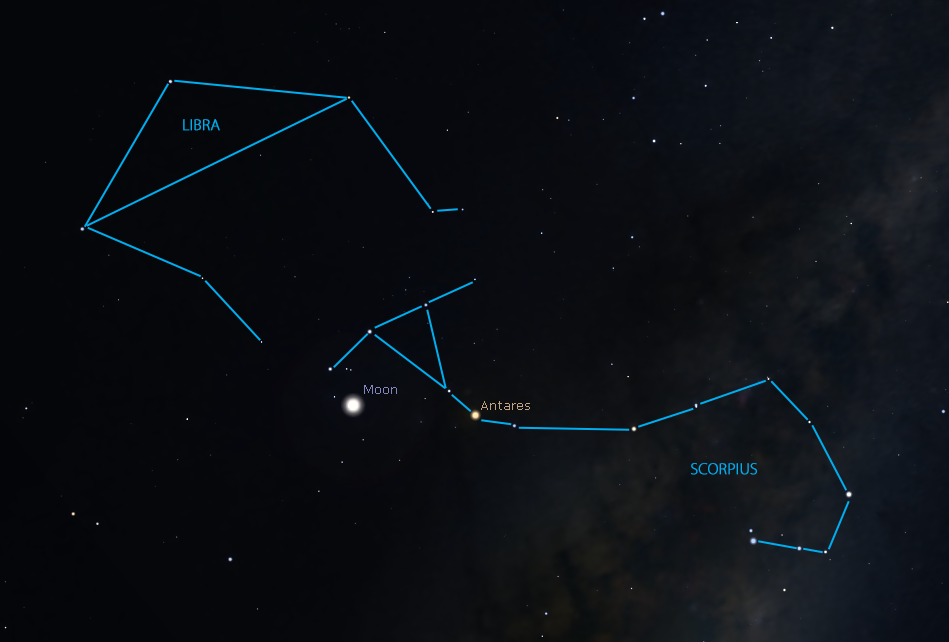 The position of the Moon next to Scorpius and near the bright star Antares during the lunar eclipse on 26 May. Credit: Stellarium