A transit of Mercury across the face of the Sun will occur on the 11th of November this year, but unfortunately Australia is in the wrong part of the world to see it! It will occur during the middle of the night of the 11th-12th for us. The next transit will occur on November 13, 2032.

Did you submit a suggestion for a new name for the star HD 38283 and its orbiting exoplanet back in September? The list of suggested names has been reduced down to six by the organising committee and now they are asking you to vote on your preferred one. Be quick! You only have until 9am EDT (6 am WST) on Monday 11th November to vote on your choices!  https://name-exoplanet.net.au/the-finalists/

November is the month the famous Leonid meteor shower happens, but no storm event is expected this year, so don’t get too caught up in any social media hype that might circulate. At best you might only see a handful of meteors radiating out from the head of Leo, but it sometimes throws out spectacular fireballs nonetheless. The best time to be watching is from 2am to 4am (or whenever the sky gets too bright as morning twilight approaches) on the mornings of the 17th and 18th of November. This year these dates fall on a Sunday and Monday, and it’s a gibbous Last Quarter Moon (gibbous means “hunchbacked”, referring to the time between Full and Quarter moons), so most of the fainter meteors will probably be washed out by the Moon’s glare and you might only spot the brightest ones. If you’re really keen to try and catch a glimpse, face yourself towards the northeast, where Leo is rising, and look up and around, and wait…

Venus has now settled into the evening sky for the summer months. It won’t look like it gets very high above the twilight because of the way the ecliptic leans over to the north at this time of year, but it should become a familiar sight after sunset again. Mercury will quickly dive down out of sight after sharing the evening limelight with it during late October, to become a poor morning object later in the month.

Jupiter is also getting lower in the west now, and meets up with Venus on November 24th. The two brightest planets usually meet up at least once a year. This will be easily visible for everyone to see, with the separation being 1.4 degrees (about two moon-widths.) After the end of November Jupiter will get harder to see as it sinks into the evening twilight for the year.

Saturn keeps its distance behind Jupiter for the moment, starting November high overhead at nightfall but by the end of the month it will also be noticeably westwards. Time to make the most of this one, too.

The early morning sky is empty of planets until Mars rises in the morning twilight. By the end of the month it is rising at the top of the twilight, around 3am. It still won’t look like much, and unless you know where to look, you might even miss it. Spica, the bright, white star of Virgo, will act as a guide on the morning of the 10th. Mercury will return to the morning sky under Mars during the last week of November, and will be brighter than the red planet.

The northern evening sky in southern Australia features the asterism known as the Great Square of Pegasus. Although one corner of this great square marks the head of the neighbouring constellation of Andromeda, it is usually shared between the two.  His origins are quite ancient but most people are familiar with the Greek myth of the winged horse.

Pegasus was born when the blood of Medusa splashed into the sea after being slain by Perseus. He was associated with the nine Muses of the arts (including Urania, the muse of astronomy) and was tamed by the hero Bellerophon to help slay the three-headed Chimera that was laying waste to the land.  Eventually Pegasus was placed among the stars for his services to the gods.

The Great Square represents the shoulders and wings of Pegasus, and his head and neck stretches from one corner and his two forelegs from the lower corner.  The star that marks the end of his nose is called Enif. Here in the south we are lucky enough to see him the right way up.

The Great Square can also act as a guide to finding the Andromeda galaxy, to the lower right of the Square (see the finder chart below). 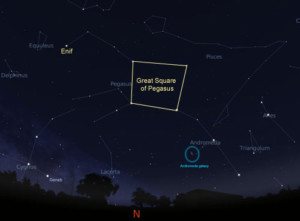 Pegasus is visible to the north as it gets dark during November.

Just off the nose of Pegasus is a neat globular cluster known as Messier 15, or M15 for short. The nose of the horse is marked by the star Enif, to the west of the Great Square of Pegasus. If you don’t have much light pollution around you should even see it in binoculars without too much trouble. Despite its brightness, it lies about 33,600 light year away.

Globular clusters are large clusters of hundreds of thousands of stars that are probably left over bits from when the galaxies formed. Most of the stars in the cluster are very old. Because the clusters typically orbit around the outside of the galaxy they retain a round, globular shape, which is how they got their name. We can see around 120 globular clusters that belong to our galaxy from Earth, and we can see thousands around other large galaxies beyond. 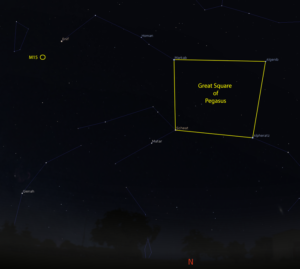 The nose of Pegasus the Winged Horse points the way to the globular cluster M15.

Asteroid Hygiea May Be Next Dwarf Planet

An instrument designed for imaging exoplanets around other stars has been revealing the shapes of planets closer to home. The SPHERE instrument on the Very Large Telescope (VLT), which is actually four 8.2m telescopes working together at Paranal Observatory in Chile, has collected the best image of asteroid 10 Hygiea, the fourth largest asteroid in the main asteroid belt between Mars and Jupiter, and revealed that it is round. This is an important finding, as it implies that it has hydrostatic equilibrium – that is, it has sufficient mass to pull itself into the shape of a sphere or ball. This means it ticks the last box that makes it a dwarf planet in our solar system. Below we can see the image that the VLT captured of 10 Hygiea. You can even see two distinct craters on its left hand side! 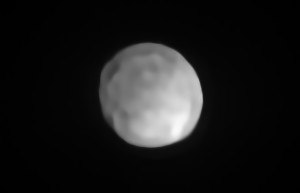 The creation of a dwarf planet category by astronomers at a meeting of the International Astronomical Union in 2006 has been controversial since its inception. On one hand many people were emotionally upset that Pluto lost its major planet status in the change, even though it’s smaller in size than our Moon. On the other hand, some astronomers didn’t like it because our solar system is a complicated place, and there are many objects that don’t fit under neat labels, such as planets, asteroids or comets. For example there are the Centaur objects, which orbit between Jupiter and Neptune, which behave as both asteroids and comets, and one of them even has rings! The dwarf planet Eris, which started all this trouble, is now known to be about 100km smaller in diameter than Pluto, but that is still a significant size for a body that far from the Sun. And then there is a question mark over the shape of Haumea – is it round, or elongated, like a fat sausage? We can’t quite tell yet as it’s so far away from us. We might only know once we send a spacecraft out to it, and that could be decades away from now.

In the meantime, we can keep studying the main asteroid belt more closely. We have already visited many asteroids in passing, and several up close. 4 Vesta and 1 Ceres, the two largest, were visited by the Dawn spacecraft in 2011 and 2015 respectively, so we have those two well mapped. We even have bits of Vesta here on Earth that have fallen as meteorites, and two sample return missions to asteroids are underway right this minute. There is a mission planned to visit asteroid 16 Psyche in 2026, which is thought to be the stripped down metallic core of a proto-planet. Now that could be something we haven’t seen before!