There are five Moon phases this November, including two Full Moons, and the second Full Moon is a penumbral lunar eclipse on the evening of 30th November. Unfortunately, Perth misses out on the best of the event, with the Moon rising shortly after 7pm having already passed mid-eclipse and travelled most of the way out of the Earth’s partial shadow. Observers on the east coast of Australia will get to see mid-eclipse about half an hour after moonrise. This lunar eclipse is paired with a total solar eclipse over Chile and Argentina on the 14th Dec, two weeks later, at New Moon. 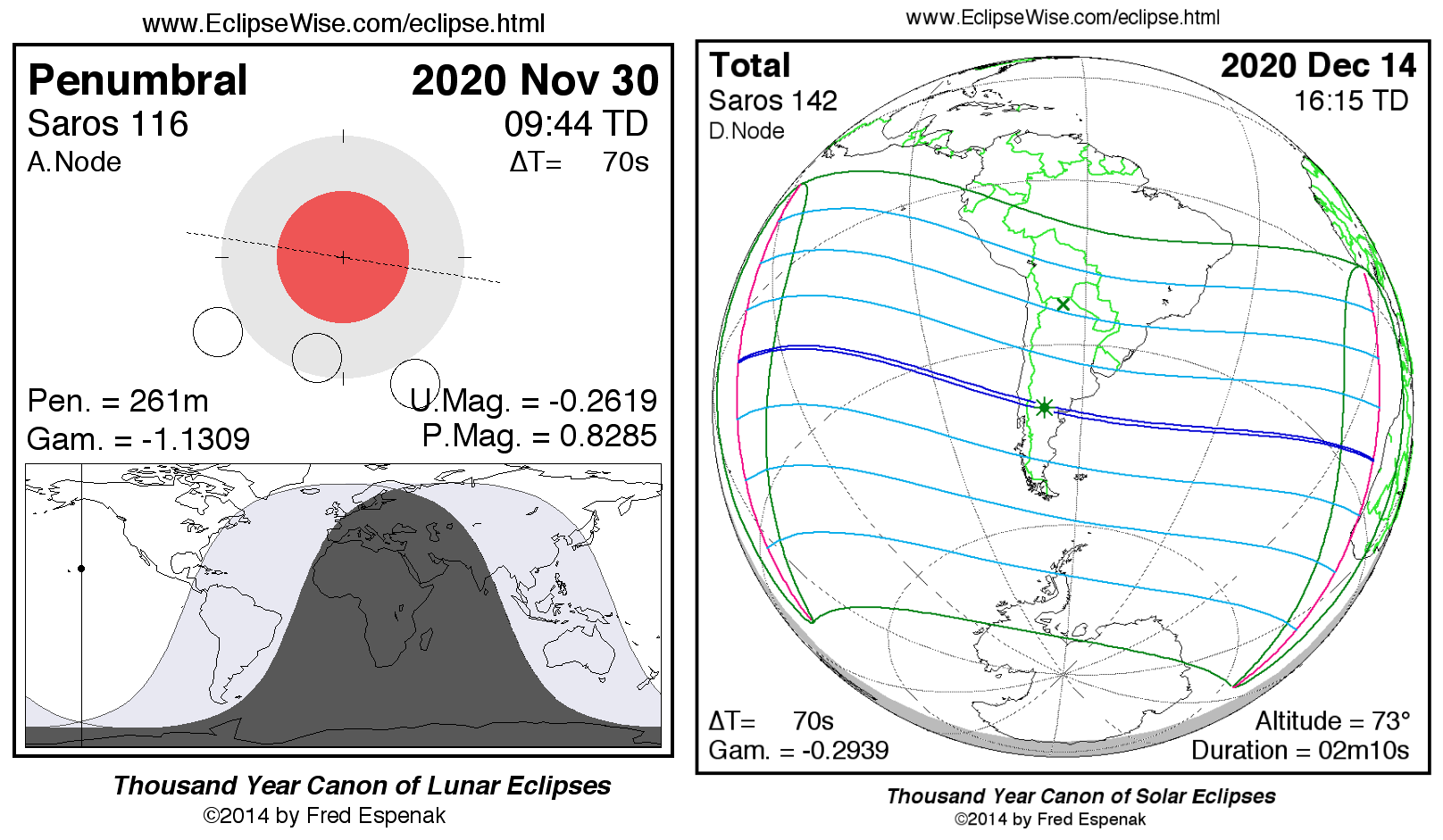 November is the month the famous Leonid meteor shower happens, but no storm event is expected this year, so don’t get too caught up in any social media hype that might circulate. At best you might only see a handful of meteors radiating out from the head of Leo, but it sometimes throws out spectacular fireballs nonetheless. The best time to be watching is from 2am to 4am (or whenever the sky gets too bright as morning twilight approaches) on the mornings of the 17th and 18th of November. This year these dates fall on a Tuesday and Wednesday this year, and it’s a few days after New Moon, which is usually favourable for meteor shower watching, leaving the morning sky dark. If you’re really keen to try and catch a glimpse, face yourself towards the north east, where Leo is rising, and look up and around, and wait…

Jupiter and Saturn continue to stay close together, preparing for their Solstice conjunction at the end of December. They start the month high overhead as darkness falls, but gradually creep down towards to the west. The later twilight is also rising up to meet them. Look out the Moon joining them on the evening of the 19th, when a crescent Moon will be next to Jupiter. It should be an eye-catching sight. Also in the picture, but out of sight, is Pluto. For the third time this year Jupiter makes a close visual pass to this distant body in the background, from the 7th to the 18th.

Mars is still bright but it is starting to fade now it is past opposition to the Sun. Still in Pisces, above the top right corner of the Great Square of Pegasus, it ends its retrograde motion on the 16th of November and starts to move eastwards once more.

Venus drifts through Virgo in the morning twilight. The waning crescent Moon joins it on the morning of the 13th. Mercury makes a very poor morning appearance during November, and is not considered easily observable this time around. Nonetheless, sharp-eyed observers with clear eastern horizons may spot it next to the even thinner waning crescent Moon near dawn on the 14th of November, less than half an hour before sunrise. Mercury will be too close to the Sun to be seen again until 2021 after this.

Cetus was originally known as a sea monster and the ancient Greeks associated him with the monster Typhon. Cetus the was the sea monster threatening Andromeda as she was chained to a rock as a sacrifice to the god Poseidon, but was turned to stone when the hero Perseus arrived and showed Cetus the severed head of the Gorgon Medusa.

The most famous star in Cetus is Mira, the Wonderful (also designated at omicron Ceti).  It is a long period variable star changing in brightness over 11 months from being easily visible to the unaided eye to needing a good telescope to spot it.  It was discovered in 1596 by David Fabricius, a student of Tycho Brahe. It was not named Mira until 1662, by Johann Hevelius. Mira’s most recent maximum was at the end of September 2020, only a month ago, so you may still be able to see it in the sky even though it has started to fade again.

In 2007 the Galaxy Evolution Explorer imaged Mira in ultraviolet light and discovered a huge tail of matter streaming behind the star as it speeds through space at 130 km per second. 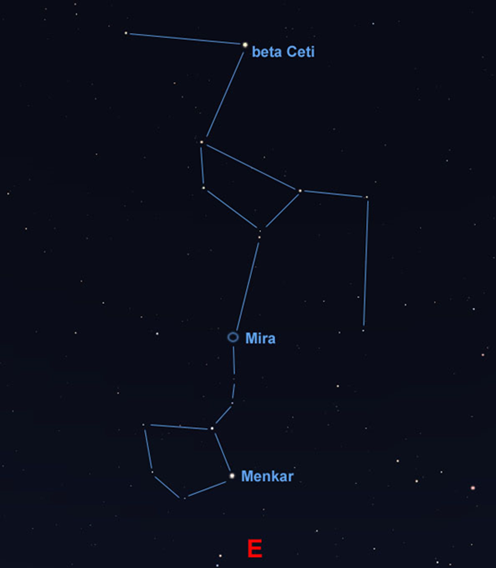 Cetus the Whale can be seen with his tail high in the air towards the east during November evenings.

The Andromeda galaxy is probably the most famous galaxy in the sky but there are other galaxies that can be seen with only minimal optical aid.  If you are in a dark location (e.g. away from city lights and without the moon in the sky) and have at least binoculars on hand you should be able to see the galaxy known as NGC 253 or the Silver Coin Galaxy.

It is a member of our local group of galaxies, lying only 9 million light years away from us – that’s close in galactic terms! It is a barred spiral galaxy but we see it nearly edge on, so it appears as a long cigar-shaped fuzzy glow in the sky.  In binoculars it will just be a faint smudge, but in a small telescope it should a large, stretched out smudge!

To find NGC in the sky look for beta Ceti first (see the Constellation of the Month for directions).  Once you have that star in your sights move slowly to the south and find the two patterns of stars (a triangle and a diamond) as highlighted in the finder chart below.  Above the diamond should be the long faint fuzzy smudge of the galaxy.  Congratulations, you have just successfully completed a star hop! 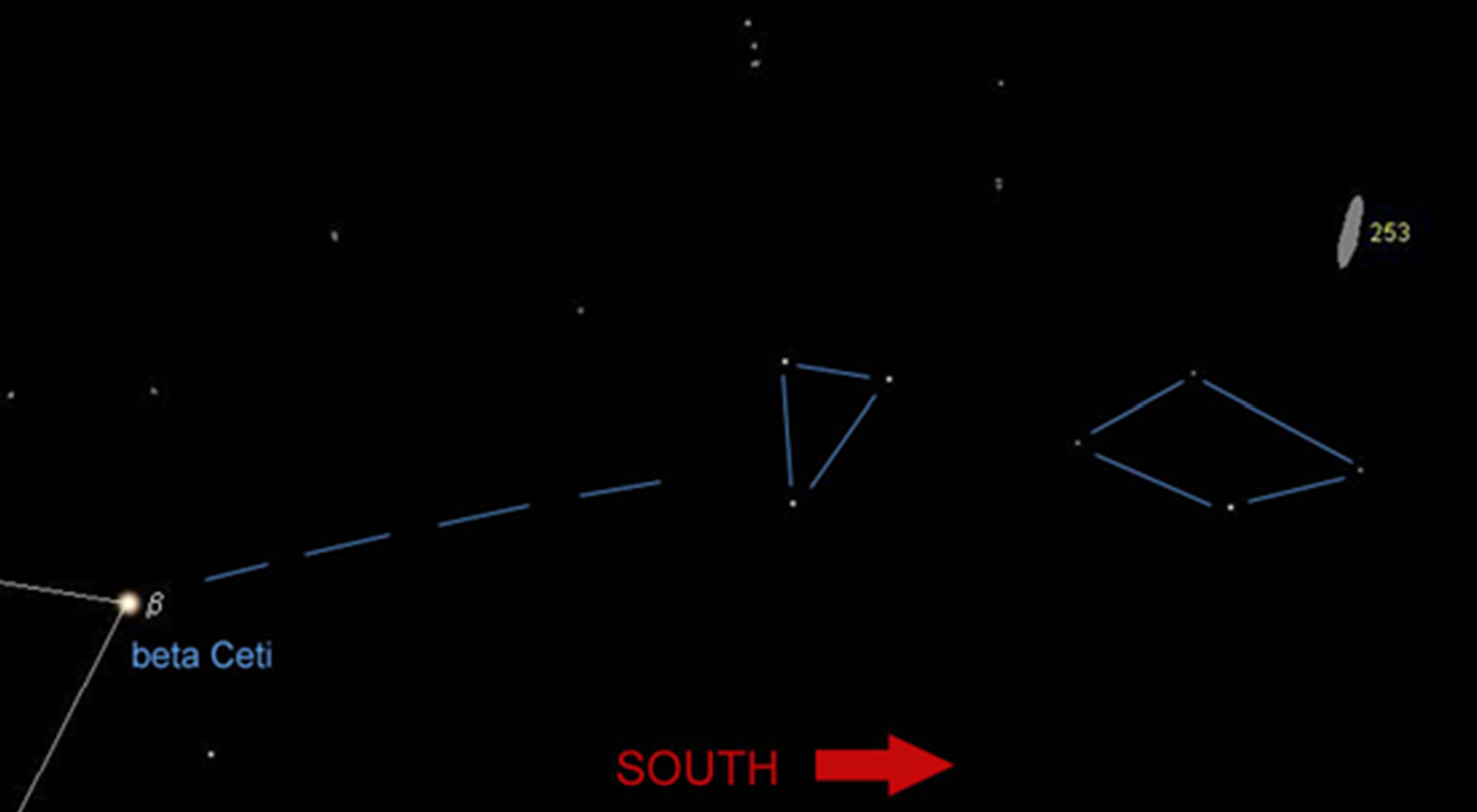 These days Voyager 1 is not as well remembered as its sister ship, Voyager 2. Both spacecraft visited Jupiter and Saturn, but only Voyager 2 went on to visit Uranus and Neptune afterwards. It was never intended for Voyager 1 to do that; the focus of its arrival at Saturn was to make good observations of Titan, known to have a methane atmosphere, and to do that it had to go under Saturn’s south pole then continue on up and out of the solar system. 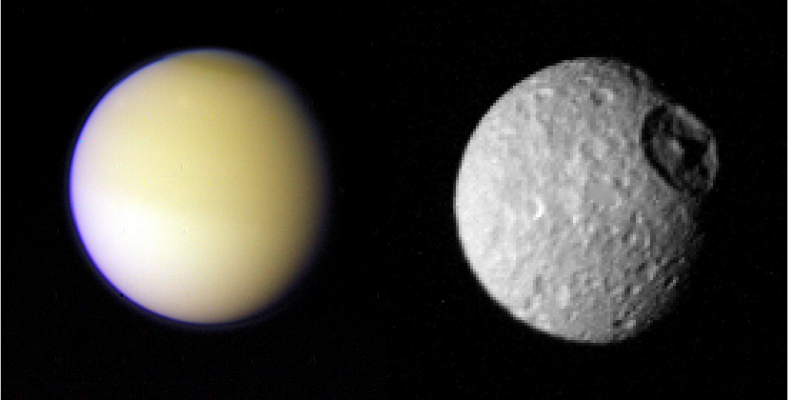 After visiting Jupiter on 5th March 1979, it was only another 18 months on to Saturn for Voyager 1. Its closest approach was on 12th November 1980. Its observations of Titan were a success, and it took images of some of the other moons, such as Mimas, with its enormous crater giving it a “Death Star” look. It also took images of the rings.

The images might look poor and low-res by today’s standards, but we need to remember they were using early 1970’s technology. It’s a problem for all space exploration, in that it can take years to get a spacecraft from launch out to its destination, by which time several years may have passed, or the spacecraft operates for over a decade, by which time the technology has definitely been superseded back here on Earth! Despite the technical challenges, the images that Voyager 1 took were iconic to a generation. The image of Saturn below, taken from behind the planet as Voyager 1 was departing, was published as a poster by the National Geographic magazine. It might be worth asking the older members of your family if they ever had that displayed on the wall in their house at one time. 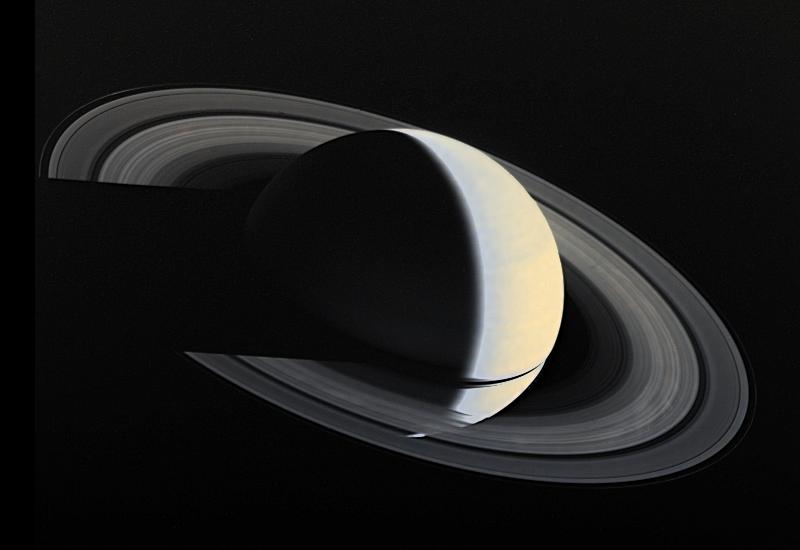