Saturday October 5th has been designated International Observe the Moon Night this year to encourage everyone to appreciate and increase their understanding of our moon. It’s at first quarter, so it will be easy to see in the evening sky. Information on a public activity near you can be found here or just enjoy the Moon from your own backyard.

It’s World Space Week during October 4th-10th. This year the theme is “The Moon: Gateway to the Stars.” It has been a low-key week for Australia in the past, but now we have an Australian Space Agency perhaps we should be celebrating our participation in space exploration a bit more proudly.

If you are up in the early hours of the morning around the 21st of the October keep a watch for the Orionid meteor shower. At peak times you may see up to 20 bright meteors an hour streaking quickly through the sky (although it won’t be an even spread, they’re more likely to come in clusters). This year the Moon is at Last Quarter on the night of maximum, so it might interfere with the number of meteors you see. The meteors that form this shower come from Comet Halley.

The planets come back out of the Sun’s glare this month. Both Venus and Mercury will travel along the top of the evening twilight throughout October. Right at the end of the month, as we transition into November, the two inner planets will come together for a brief conjunction, and then Mercury will dive into the Sun’s glare again while Venus continues to climb upwards into the evening sky for the summer months.

Jupiter is now in the western half of the evening sky, and setting before midnight. This means we start with Saturn right overhead as darkness falls, a bit of a neck-stretching position for some. But as the night moves on they will get a bit easier to view as they move westwards.

With four planets already mentioned, that leaves only Mars. If you are a keen-eyed early riser you may spot it in the dawn twilight about due east near the end of the month. Remember, it is on the far side of the Sun from us and won’t be much to look at in a telescope anyway. In 12 months’ time it will reach its next opposition and then we’ll be anting to view it at its best!

Not far from the bright star Altair lies a small, neat constellation called Delphinus the Dolphin. To us here in the southern hemisphere his small figure appears to be doing a long graceful back-flip through the northern sky. The dolphins of the Mediterranean were revered by the ancient Greeks, who believed they were the messengers of Poseidon, god of the Sea.

Only alpha and beta Delphini have names, and strange ones at that – Sualocin and Rotanev. While they probably shouldn’t have been left there, being the remains of a sneaky joke, they have become part of astronomical history, from around 1814, and now no one is likely to change them. If you reverse the names they become Nicolaus Venator, the latinised form of the Italian astronomer Niccolo Cacciatore, who was the assistant and successor to Giuseppe Piazzi, who discovered the first asteroid, Ceres, at the Palermo Observatory. 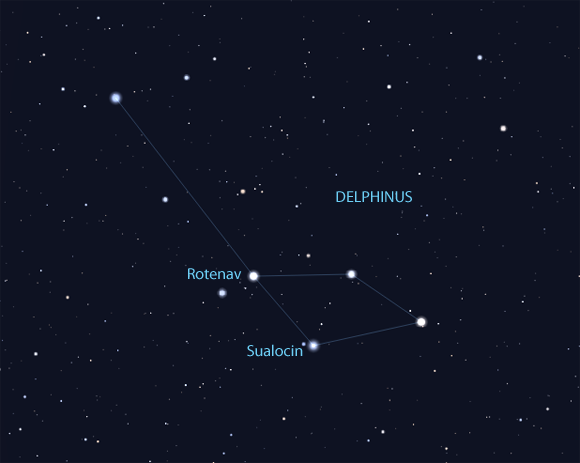 Delphinus is a small constellation that can be found in the north-western evening sky during October.

Here’s a good object for observers with binoculars! Or you could just use the finderscope of your telescope – any low power observing aid will do. Towards the north at the moment, just below the end of Sagitta the Arrow, lies an open cluster of stars known as Brocchi’s cluster, or the Coathanger.

There are 10 relatively bright stars that make up the coathanger shape, which is not a true open cluster but a lucky chance arrangement of random stars that are not associated with one another. There was a written description of the cluster in 964 AD by the Persian astronomer Al Sufi but it is named after the American amateur astronomer Dalermo Brocchi, who made star charts showing the brightness of stars for other members of the American Association of Variable Star Observers to calibrate their photometers against in the 1920’s. Today most amateur astronomers just refer to it as the Coathanger. 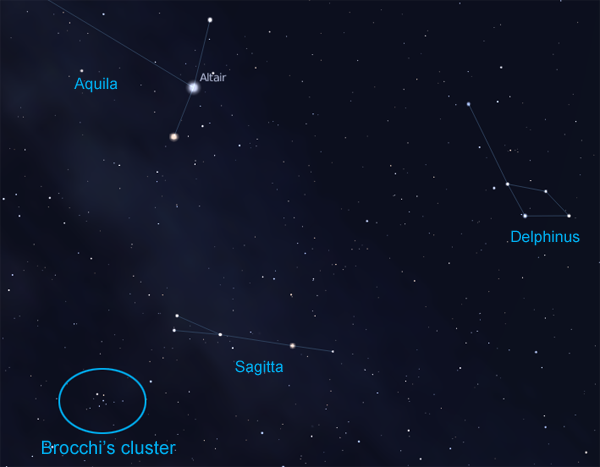 Look to the north and find Altair in the constellation Aquila and the constellation of the month, Delphinus. From there come down to find Sagitta the Arrow and Brocchi’s cluster should be easily seen to the lower left of Sagitta. 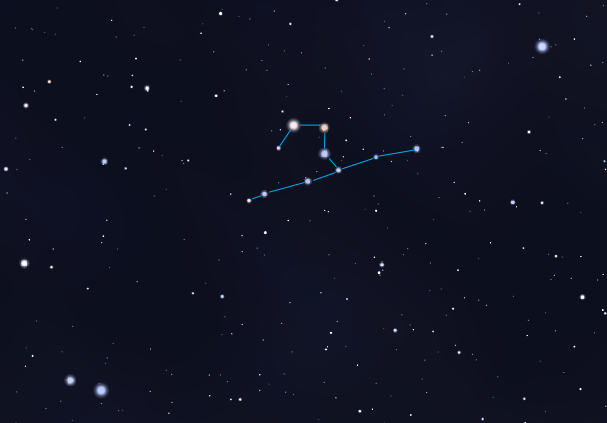 The ten stars that make up the coathanger shape of the cluster.

On the 30th August Russian amateur astronomy Gennadiy Borisov discovered a new object in the sky. He noted that it was moving in a different direction than most main belt asteroids, so it was probably something to check carefully – perhaps it might become a hazard to Earth. Thankfully this is not the case, as we now know it won’t come any closer to Earth than the orbit of Mars, but it did require careful checking, as it turned out to be the second confirmed interstellar object in recent times!

It quickly became obvious the object was a comet and not an asteroid, as it had a fuzzy halo around it. But there was a lot of discussion around its orbit. The orbit looked hyperbolic, meaning it wasn’t a closed orbit within the solar system, it was one where the comet would go around the Sun and skip on out into the galaxy. It had to be observed for several days before the correct conclusion could be made, as the more points of observation you have to determine an orbit, the more accurate your calculations will be.

Eventually it became clear that it definitely was an interstellar visitor. Not only was the orbit highly hyperbolic, it was traveling extremely fast for a comet, ten-times faster than an average solar system comet! It was then given the designation 2I/Borisov (the 2nd Interstellar object) but it has kept its finders name because of its cometary nature (comets are named after their finders.) The first interstellar object found was 1I/ ‘Oumuamua in 2017. 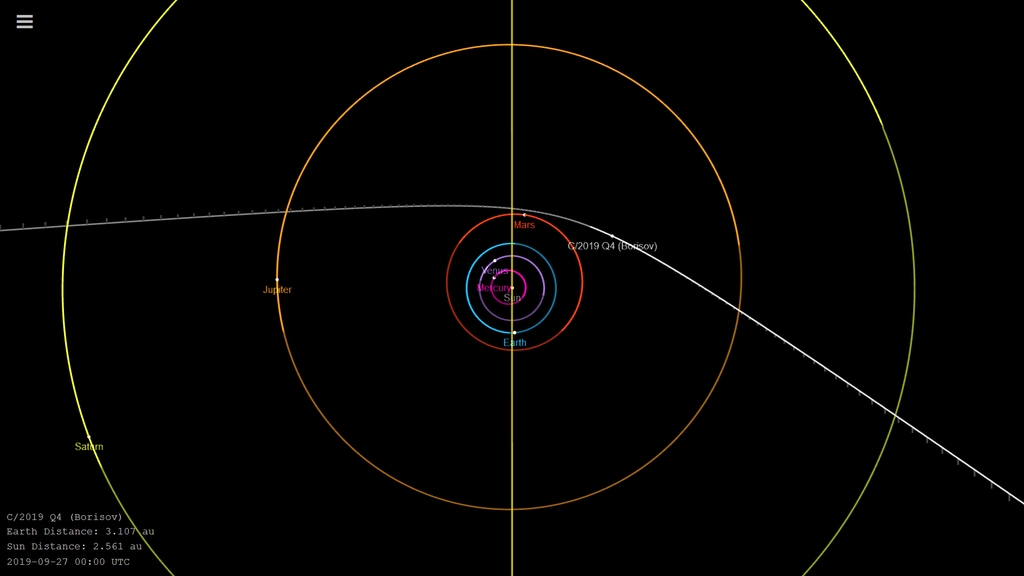 The trajectory of Comet Borisov, as seen looking down on the solar system. It will reach perihelion (closest point to the Sun) beyond the orbit of Mars on 8th Dec 2019, then head on out of the solar system. Credit: JPL, NASA