Wondering what that bright light in the western sky after sunset is? It is Venus! It will be there in the evening sky for the rest of the year. Look out for the Moon next to on the evening of the 10th September. Can you spot Mercury below it this month as well? 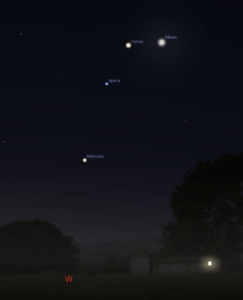 The western sky after sunset on 10th September.

This September will be the most favourable time to see Mercury in the evening skies during 2021. It spends the whole month above the western horizon in dark skies after sun set. The Moon swings wide of it on the 9th, but on the 21st Mercury will be closer to the star Spica, to its left. Spica is the brightest star of the zodiac constellation Virgo and is a clear white colour, whereas Mercury usually as a orange-red cast to it.

Brilliant Venus is higher above Mercury, creeping a little higher each night. It meets Spica on the 6th of September.

On the other side of the sky, Saturn and Jupiter are now visible once the sky is dark. Brighter Jupiter has put quite a bit of distance between it and the ringed planet Saturn since we last saw them together in December 2020. Fainter Saturn still stands out, though, near the top of Capricornus, were there aren’t many bright stars to compete with it. The Moon is to the right of it on the 17th. The next night The next night the Moon is next to Jupiter. Jupiter spends all of September near the “tail” of the Sea Goat, delta Capricorni, or Deneb Algedi.

For the early risers, there is nothing much in the dawn sky of note this month. As the Sun nears the dawn horizon and the stars fade away, you might notice Jupiter setting on the opposite side of the sky, in the west. Because it is brighter than all the stars it will be the last to fade into the blue; A nearly full Moon will set not long after it on the morning of the 19th.

Cygnus the Swan is a large constellation that stretches along the Milky Way in the northern part of the sky. From Australia we see the Swan flying upwards through Milky Way, his tail pointing down towards the horizon and two broad wings stretching either to either side.

The brightest star in Cygnus is the star marking the tail, Deneb (which means ‘the tail, too). This is a massive blue-white supergiant that shines 54,000 times brighter than our sun. Fortunately, it lies about1500 light years away, otherwise our sky would be quite bright at night!

There are some interesting objects to found within Cygnus, as it covers so much of the Milky Way, but not all are easy to see in a telescope. There are large areas of nebulosity (huge areas of gas and dust). The North America nebula is near Deneb and shows up well in photographs, but not so well in telescopes. New stars are being born here. But another large nebula, popularly known as the Veil Nebula, is the remains of a supernova, a star that exploded. The Veil Nebula covers an area of sky 5 times wider than the moon.

Cygnus also contains a black hole, known as Cygnus X-1. It is one of the strongest sources of x-rays in our sky and was found in 1964, when rockets with Geiger counters were sent up into space to scan the sky as an experiment (we are protected from x-rays from space by our atmosphere). It lies about 6000 light years away, so it is no threat to us. 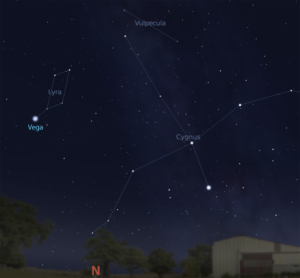 When we look up into the sky we see the stars as individual points of light. But many of those stars are actually double or multiple star systems – they are so far away that their light combines together to look as one.

Double stars can be fun to look at for their colours. It is not easy for us humans to see colour at night; we are made for bright daylight conditions and often objects in a telescope just appear in shades of grey, but the brighter stars sometimes show their colour to us. Double stars make the colour even easier to see, as you have two or more stars to compare to each other in the eyepiece.

Albireo, or beta Cygni, is an easy double star that marks the beak of Cygnus the Swan. The two components of the star are widely separated, so you only need a low magnification to split them apart. One is typically described as blue and the other yellow. Or you might like to call them aqua and topaz. Or … what colours do you see? 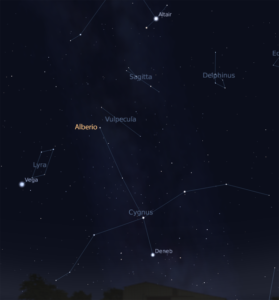 It is a well know trivia piece that Saturn is less dense than water, despite its huge size. Seeing below the cloud tops of hydrogen and helium that create the visible outer atmosphere of the gas giant isn’t easy, but there are indirect ways to tell what is inside a planet.

On Earth, we use the reflected waves created by earthquakes to help us “see” what is below the surface. The noisy waves bounce off the solid core inside out planet and slow down or speed up as they encounter different densities in the rock below. Astronomers have recently been able to put together a rough picture of the interior of Mars using marsquakes observed by the Mars InSight lander, revealing a core half the size of the planet and a much thicker mantle than Earth’s.

The Juno spacecraft has been orbiting Jupiter since 2016 and from its movements as it swung around Jupiter on its elongated orbits it revealed that the biggest planet in the solar system has a core of rock of ice surrounded by metallic hydrogen, rather than just the metallic hydrogen as originally thought. And a few weeks ago in August astronomers from Caltech announced that by studying data collected by the Cassini mission during 2004 to 2017 that the innermost region of Saturn’s rings reveals information about what is inside the second largest planet.

A slice of Saturn’s rings. The D ring is barely visible on the on the far left-hand side.
Image Credit: NASA/JPL/Space Science Institute

Its hard to say how many rings Saturn actually has, as the closer you look at them, the more you see. On a good night in a small telescope you might see five to six of the main divisions and the dark line splitting them known as the Cassini division. The region of the rings that the astronomers were most interested in to study the inner mysteries of Saturn was the faint D ring, the innermost of the main ring regions. 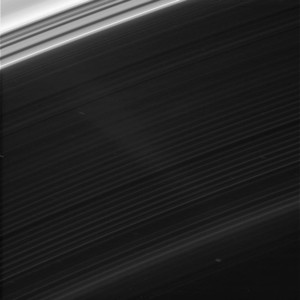 The spiral nature of the D ring, much like a never ending vinal record groove, hints that inside of Saturn are rocks and ice like Jupiter has, but so loosely held together they slosh about as the planet rotates. There is no metallic hydrogen layer here, the slightly greater amount of helium present, that gives Saturn it’s distinct yellow colour in a telescope, mixes with the hydrogen and the two gases form a fuzzy mixing layer with the ice and rock core.

You can read more about the discovery and watch a short video of a model of what Saturn’s core looks like here.