The Milky Way is getting lower in the sky making October your last good chance to see the brightest central regions before it dips below the horizon over summer. You will need to get away from the city lights to see it in all its glory.

The Southern Taurids meteor shower will light up the sky this month. This shower emanates from the constellation Taurus, the Bull, which will be visible in the late evenings towards the north. This meteor shower is drawn out over the month but tends to peak in early October, corresponding nicely with the New Moon on 6 October making for a dark sky and good viewing conditions.

The same can’t be said for another October favourite, the Orionids. These meteors emanate from the constellation of Orion, the Hunter, who’s distinctive 3-star belt makes this constellation easy to spot, hot on the heels of Taurus. The Orionids meteor shower – caused by Earth passing through the dust tail left behind by Halley’s comet – peaks around 19-20 October, exactly the date of the full moon, which will severely interfere with the visibility of this year’s shower. But if you never try then you never know! Maybe you’ll get lucky and catch a couple in the early hours before sunrise.

Venus continues to dominate the western sky in the evening. It’s so bright you can easily see it in the evening twilight before night falls. Jupiter and Saturn are getting higher in the sky as the Earths motion carries them west across the night sky. 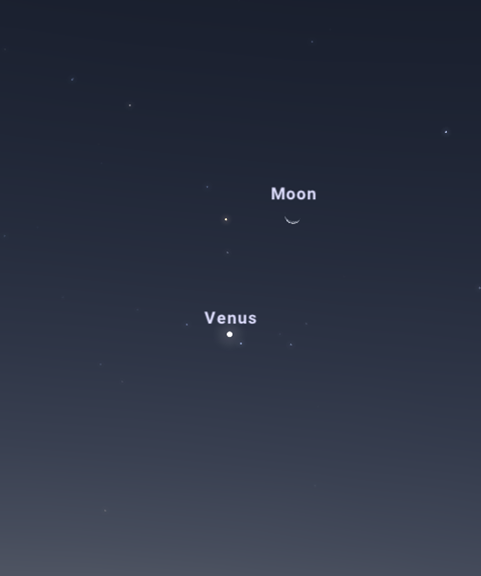 Venus, the Moon and Antares form almost a right angle triangle on the night of 10 October.

What’s in a name?

When you are looking at Venus and Antares on 16 October, take a moment to pick apart the name ‘Antares’, better thought of as Ant-Ares. This translates from ancient Greek as ‘Rival to Ares’. Ares is the Greek equivalent to Mars in Roman mythology, so the name Antares loosely means ‘Not-Mars’.

As Mars orbits the sun, it’s position relative to Earth sometimes brings it close to Antares in the night sky, and the red star and red planet can easily be mistaken. Having a name that tells you it isn’t Mars makes it easy to never confuse the star for the planet, although not a problem for this month as we won’t be able to get a good view of Mars in the sky until November.

Early in the month, Mercury is still just barely visible in the west right after sunset, close to the bright star Spica. But it will soon get lost in the suns glare, and then appear early in the morning later in the month, rising in the east just before the sun.

Venus is unmissable in the western sky in the evening – you can see how it got the nickname ’the evening star‘. Did you hear the announcement from NASA that they will send two new spacecraft to study Venus’s geology and atmosphere later this decade? Learn more about Venus and these spacecraft here.

Saturn and Jupiter will be bright and visible high above us this month. They have both been moving retrograde for the last few months in an east-to-west direction but will do a U-turn on 10 October and 18 October respectively and start to move the other way. Because of their orbits around the sun, all the planets move in a west-to-east direction through the solar system. As Earth is closer to the sun than Jupiter and Saturn, it moves faster, so as it overtakes the two giants on its race around the sun the relative motion makes them appear to move backwards across the sky. Think of when you overtake a car while driving, you are both moving forwards, but because you are moving faster than them, their relative velocity to you is backwards.

Now that Earth has overtaken Jupiter and Saturn and moved further around on its orbit, we will see them start to move west-t-east again. (Be careful not to confuse this discussion with the spin of the earth causing objects to rise in the east and set in the west. Here we are talking about the motion of the planets around the sun, not the rotation of our planet.)

Spotting the motion of these giants is quite subtle, and something you can do over a period of weeks. Close to Jupiter you will see a bright star, Delta Capricornus, sometimes called Deneb Algedi. Using this star as a reference point to track its position each night, watch Jupiter over the coming weeks and you should see it move in an easterly direction.

Aquila is a constellation that lies along the Milky Way and is visible in the northern sky during this month. It is taken to be an eagle and in Greek mythology carried the thunderbolts of Zeus. Other interpretations have the eagle carrying the boy Ganymede to Mount Olympus for companionship with Zeus. Ganymede is sometimes associated with the nearby constellation of Aquarius, and these days lends his name to the largest moon of Jupiter.

Being in the Milky Way, Aquila is home to many star fields and nebula, including the Glowing Eye Nebula and NGC 6781. 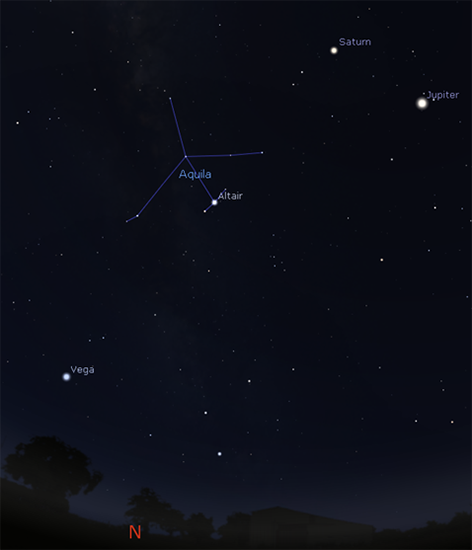 To the naked eye, the star Altair stands out prominently and can be taken to be the neck of the eagle, while the wings spread out on either side beneath it. This reasonably bright main sequence star is notable for its exceptionally rapid spin, completing a rotation every 9 hours or so. For comparison the sun takes about 25 days to go round once. 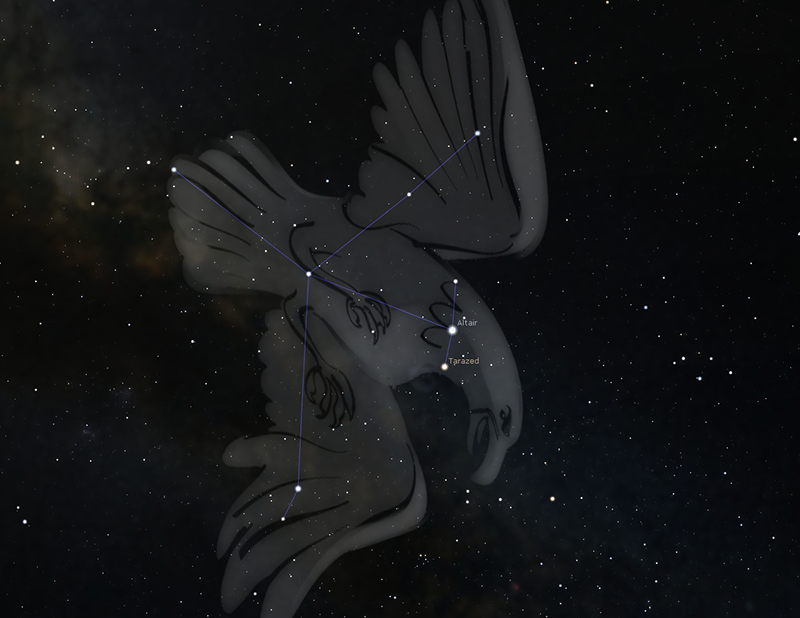 Not far from Altair you will find the 71st entry in Charles Messiers catalogue. 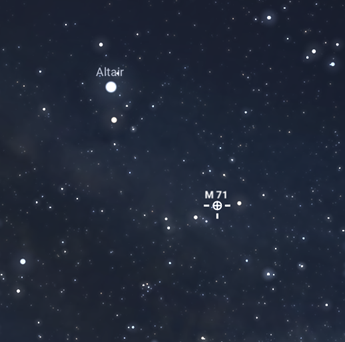 Image: M71 in the night sky 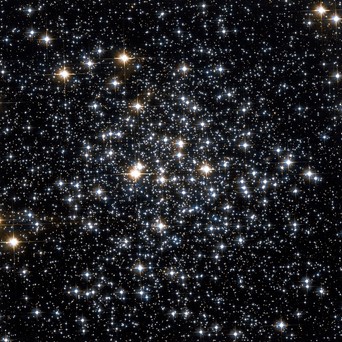 Image: M71 as seen by the Hubble telescope (NASA/STSci/WikiSky)

In case you missed it, WA’s first satellite launched on 29 August aboard the SpaceX CRS-23 mission to the International Space Station. The lunchbox sized satellite ‘Binar-1’ was designed and built by the team at the Space Science and Technology Centre (SSTC) at Curtin University and will be deployed from the ISS on 6 October. It is expected to orbit for about 18 months before the slight atmospheric drag at that altitude causes its orbit to decay and bring it back to earth where it will light up the sky in a fireball.

Appropriately, Binar is the Noongar word for ‘fireball’ and also a nod to the massively successful Desert Fireball Network and the Fireballs in the Sky program, also overseen by SSTC.

Binar-1 is the first of seven satellites in the Binar Space Program and is primarily intended as a validation mission to check that all of the hardware and software works as intended – it is the first homegrown satellite after all, and you want to be sure it works! The people on the ground will be examining countless readouts of voltages, currents, temperatures etc. hoping to see all the right values. Lessons learnt from this mission will influence the design and manufacture of Binars 2-7, which will be launched in two groups of three in the second half of 2022.

Binar-1 carries two cameras on board; a star tracker, which will use the positions of reference stars to aid in the spacecraft’s navigation; and an imager for taking photos of Earth, particularly Western Australia.

The long-term goal of all of this is the Binar Prospector, a planned pair of satellites to orbit the Moon and assist with NASA’s Artemis Program to return people to the Moon. 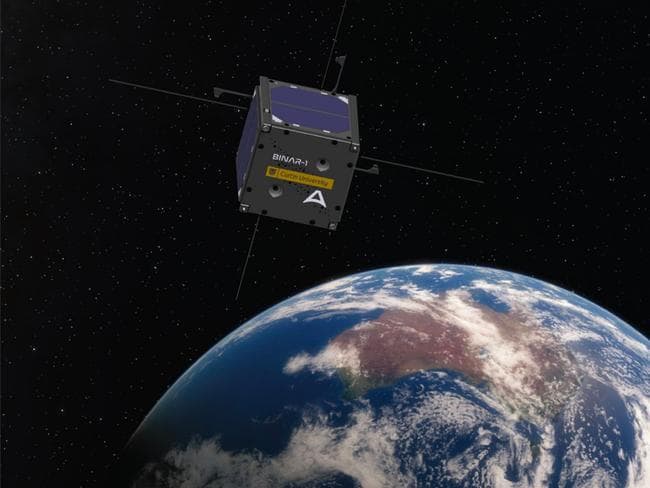 NASA releases First Woman, a graphic novel about the first woman to walk on the Moon. This fictional story sets the bar for the upcoming Artemis missions, which aim to land the first woman and first person of colour on the Moon this decade.

Landsat 9 was launched late September. This is the latest in a long line of Earth observation satellites providing critical information about our planet and how it changes and evolves.

The reason for the seasons is a stunning Astronomy Picture of the Day. It shows a one year timelapse of Earth, with the effect of the tilt dramatically illustrated.

Lucy is going to the Trojans! Launching on 16 October, this NASA mission will study asteroids caught in Jupiter’s gravity. These asteroids have remained unchanged for billions of years and give clues into the origins and formation of the solar system.

SpaceX continues its furious pace of development at Starbase in Boca Chica with the development of the launch tower and ground support equipment. 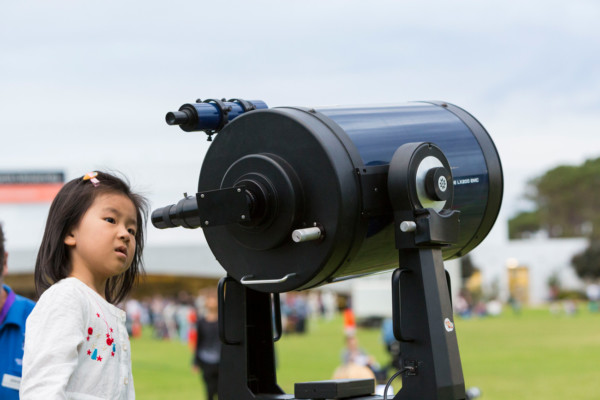 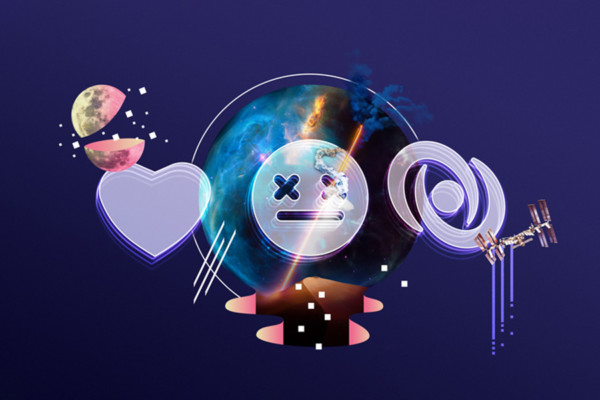